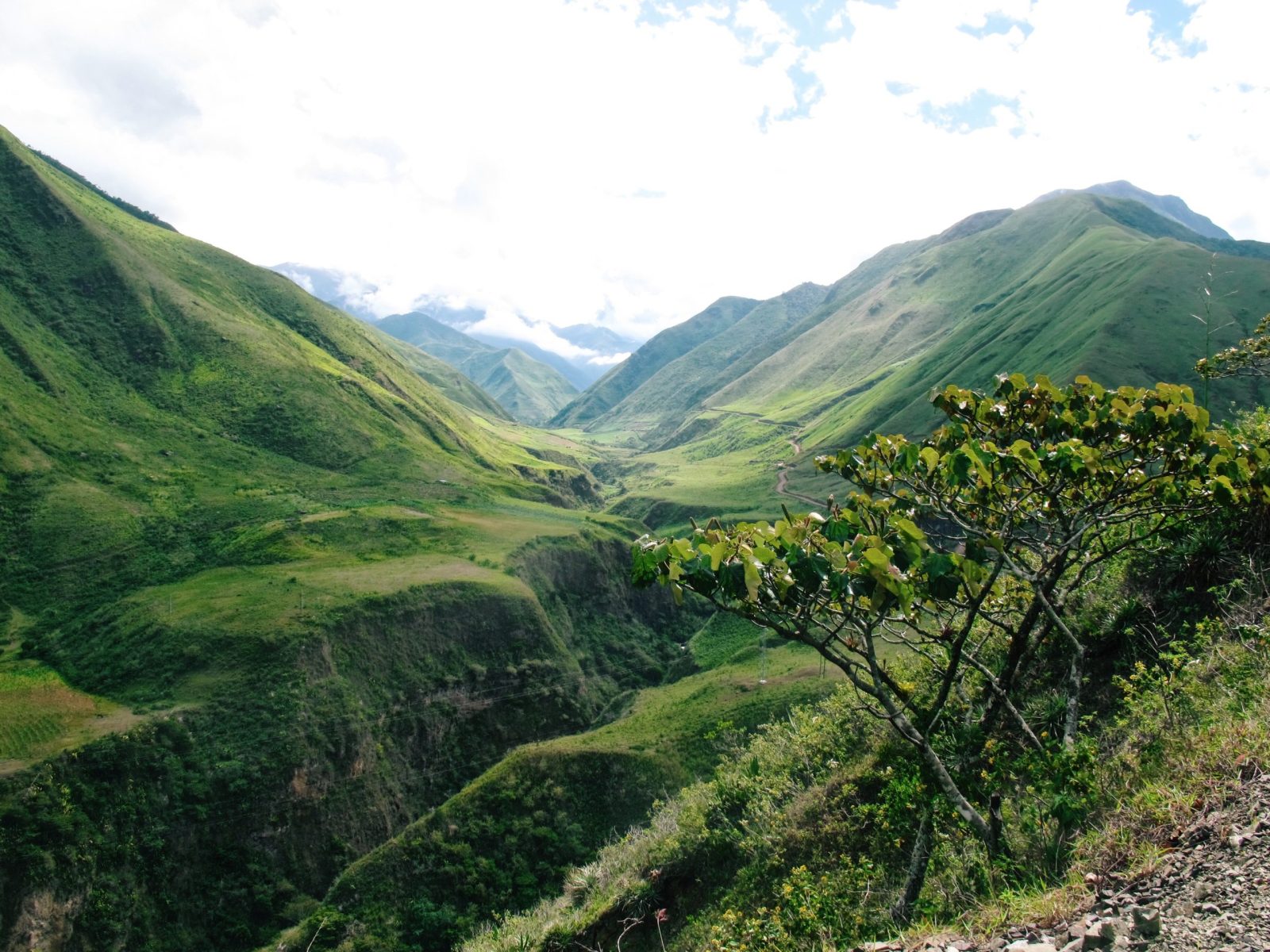 Fourteen months in Central America — Belize, Guatemala, Costa Rica, Nicaragua — went by in a flash, and with my Nicaraguan visa about to expire, I was faced with the question: Where next? The answer: Ecuador.

There is a valley in Ecuador that is guarded by a colossal stone god; it’s a valley where butterflies and dragonflies swarm, where wildflowers perfume the air, where fruit trees flourish, where rainbows blossom in the mist and precipitous paths lead to panoramic vistas of endless mountains — an undulating sea of green.

The valley is called Vilcabamba, and it’s also known as “the Valley of Longevity”. The name of the stone god — in reality a mountain that resembles a prostrate human — is Mandango, which means the “Sleeping Inca”. Mandango is said to guard the valley against earthquakes and other natural disasters.

Nestled at the bottom of the valley is the little village of Vilcabamba. It came to international fame in 1973 when Dr Alexander Leaf of Harvard Medical School wrote a cover story for National Geographic in which he reported that many of the inhabitants of Vilcabamba lived for an extraordinarily long time, some of them notching up 130 years and more.

This, he attributed to minerals in the local water, to the high altitude and living a simple, pastoral life. However, the story was later debunked when it was found that the residents had vastly exaggerated their ages. “Very Old People in the Andes Are Found to Be Merely Old,” as a 1978 headline in The New York Times put it.

But by then the “Valley of Longevity” moniker had struck a chord in the consciousness of global travellers, aspirant shamans, would-be warlocks, questing hippies, curious itinerants, restless peripatetics and Westerners eager to extend their stay on this mortal coil.

They descended on the little village… and many of them stayed, beguiled by the clement weather, the beautiful surroundings, the bucolic lifestyle.

You can see them in Vilcabamba today, shooting the breeze on the sidewalk tables outside La Terraza restaurant, drinking cappuccino at Beverly Hills Cafe, trading conspiracy theories at Charlito’s, riding their bicycles to the Mikuy organic vegetable store.

But these days they are no longer hippies or shamans or travellers. They are expats. They have made the transition from New Age to Old Age. Those dreadlocks of yore have been replaced by a shiny, bald pate. The Conanesque mane of 30 years ago has dwindled to a little grey ponytail. Muscles have atrophied, breasts have drooped, buttocks have disappeared, stomachs have expanded. Justin Bieber has morphed into Willie Nelson.

The expats of Vilcabamba are heading for the “last scene of all”, as Shakespeare said, “sans teeth, sans eyes, sans taste, sans everything”. But that’s still a long way away because, let’s not forget, this is the Valley of Longevity we’re in.

And they — well, at least the expats I met — appear to be a cheerful, outgoing bunch, hale and hearty, bright-eyed (after a couple of gins or beers), if not bushy-tailed, so perhaps there is something to this Valley of Longevity schtick after all.

King of the Expats, at least to my mind, was Charlie, the owner of Charlito’s. Charlie is 70, but looks a decade younger (that Valley of Longevity thing again). Balding, bespectacled, slightly rotund and hailing from the US, you can find Charlie holding forth from behind the counter of his restaurant.

The first time I saw him, he was involved in a conversation about weapons with a youngish US traveller. About subsonic bullets, to be exact.

“I had a rifle that fired subsonic ammo,” said the traveller. “Pull the trigger and — Pah! — that’s exactly how it sounded. Pah!”

“You know,” said Charlie, “what I really miss is my old Mossberg. Now, that wasn’t quiet… it made an exceptionally loud ‘boom!’ when you fired it, but it sure as hell would be handy to have out here.”

“A Mossberg shotgun?” I asked, feeling the need to get involved in a conversation between two strangers — something I would never have done back home in Glencairn Heights in Cape Town’s Deep South.

That’s one of the things about being a digital nomad in far-flung places: you have no personal history to weigh you down and you can reinvent yourself as you go along.

“I thought everyone here was a peace-loving hippie. What’s with all this gun talk?”

“Really? Why do they come to this little village?”

“It’s out of the way, I guess. Look…” and Charlie pointed to an old geezer walking past the window. “That guy, for example… he used to be a US Marine.”

The thing with Charlie is that you never knew whether to believe him, or whether he himself believed the things he said. He claimed to have been an actor, a salesman, where he learnt all “about neuro-linguistic programming and could convince anybody to buy anything”, a violinist.

When I told him that I had to take a PCR test for Covid-19 to get into Ecuador from Nicaragua, he said,“You know that they use those PCR swabs to insert nanobots into your brain, so they can keep you under constant surveillance.”

“I didn’t know that,” I admitted. “I didn’t realise I was important enough to keep under constant surveillance. It must be a pretty tedious job, though, monitoring all those nanobots. I guess they have a big team doing it, and they get a lot of Boredom Pay.”

And don’t get Charlie started about Covid-19 vaccines. He’ll give you The Schpiel, the one about how the vaccine is going to, within three years, kill 80% of the people who get it, by altering their RNA and making them susceptible to every opportunistic infection that comes along. Or about Covid-19 itself… that elicits the Plandemic Schpiel. And when Charlie gives his schpiels, the Charlito’s regulars all nod sagely and add their own two-bits worth.

I’d been in Vilcabamba for two days when the government announced that the hospitals were getting overwhelmed with Covid-19 patients and that a weekend-long curfew would be implemented for the next three weeks.

I had no inclination to spend weekends in a hostel, so I took a taxi ride a couple of kilometres up the hill to a retreat called Izhcayluma. It had everything I needed for weekend lockdowns: a restaurant, a bar that served artisanal beer brewed on a farm across the road, its own hiking trails, a swimming pool and a pool table. It even offered yoga and massages. The place was a veritable Shangri-La, but I still felt the need, after work on weekdays, to walk a couple of kilometres down the hill to the village.

This was because a bar there, Zarza, served the finest Indian Pale Ale I had drunk in Ecuador. Seated on the bar sidewalk opposite Parque Central, I’d savour a couple of these beers, with their zesty notes, spicy body and caramel aftertaste, and survey the goings-on in the village.

I noticed that almost none of the foreigners, most of them from the US, wore masks, while just about all of the villagers did. Wearing masks was compulsory, and the villagers believed in their efficacy.

If you didn’t wear a mask you frightened the locals. What a world this is, I thought, where you have to wear a mask so other people aren’t scared of you. Mind you, if we had to remove all of our masks that would be a frightening sight — all those hurt, bewildered children, with their big, grown-up bodies, crying out for love.

However, my gentle musings were replaced with ire after IPA number three and I went to Charlito’s to give the gringos a piece of my mind.

“I’m not a mask Nazi,” I told the assembled regulars. “I never wore one in Nicaragua, where it’s not compulsory, and most people don’t believe in them.

“But here… the people believe in them, and it’s a show of disrespect not to wear one. You may think you’re all so free and that you’ve cut through the bullshit, but all you’re doing is displaying arrogance and your own perceived sense of entitlement. Not only that, but…”

Unfortunately, I was unable to continue as the assembled gringos jeered me out of Charlito’s.

I thought about the incident a few days later and realised that the outburst was just a reflection of my own egotism and that in reality, I had been projecting my own arrogance. Clearly, there is something in the water in the Valley of Longevity… DM/ML