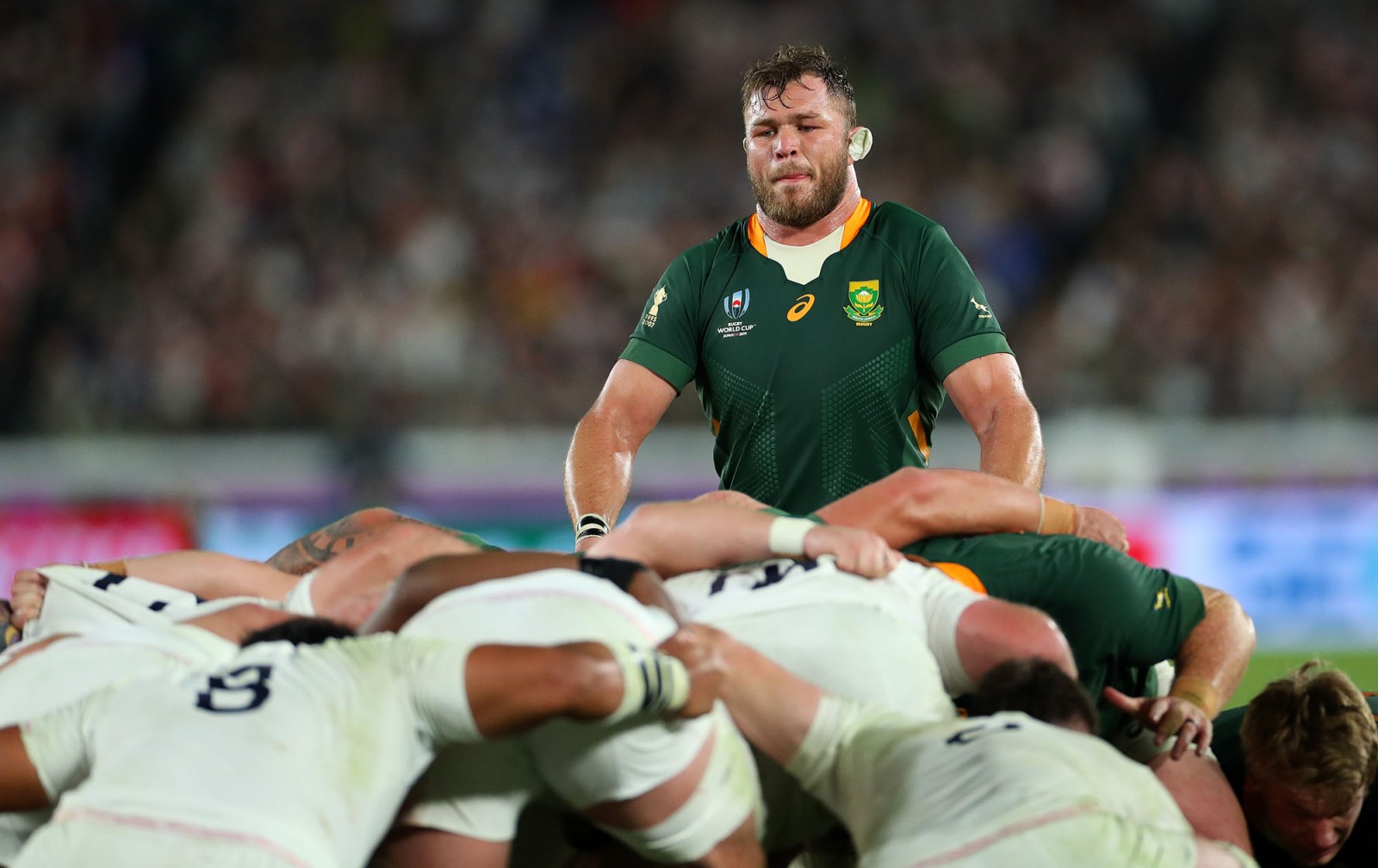 Duane Vermeulen, seen here during the Rugby World Cup 2019 Final between England and South Africa at the International Stadium Yokohama on November 02, 2019 in Yokohama, Kanagawa, Japan, will return to the Boks' Test squad to take on Australia in the first of four Rugby Championship matches. (Photo by Dan Mullan/Getty Images)

After a few eventful days it emerged that there is bad news for Bok No 8 Duane Vermeulen, who needs surgery, but good news for Damian de Allende and RG Snyman after burns they suffered are not as serious as initially thought.

Springbok No 8 Duane Vermeulen will have ankle surgery this week to repair ligament damage sustained while playing for the Bulls against the Stormers last Friday.

It’s a massive personal blow for Vermeulen as well as a huge setback for the Boks. At this stage Vermeulen has not been ruled out of the Test series against the touring 2021 British & Irish Lions, but it has narrowed his chances of taking the field. The first Test is on 23 July, giving him about seven weeks to recover.

Vermeulen’s surgery was confirmed by a highly placed source.

Although the outcome of the surgery and follow-up assessment will be needed before the Springbok management knows whether Vermeulen will recover in time, they will almost certainly have to call Marcell Coetzee into the squad as cover.

Bok coach Jacques Nienaber said at the unveiling of the squad that the versatile Coetzee, who covers every position in the back row, was initially omitted from the 46-man squad due to lack of game time. Coetzee played his first match in 10 weeks when he turned out for the Bulls against the Stormers last Friday following injury.

Fortunately, the veteran of 30 Test matches showed that the layoff had done him no harm as he gave a strong display on debut for the Bulls. With possibly two more provincial matches to go (if the Bulls make the Rainbow Cup final), Coetzee will have some more miles on the clock.

Losing Vermeulen though, who has been the best and most consistent player in South Africa since play resumed after lockdown last September, for the Lions series, would require a rethink from the Bok coaching staff.

Vermeulen’s all-round ability and sheer force of will and commanding presence are impossible to replicate. There are no ready-made like-for-like replacements, although there are quality options.

If Vermeulen is ruled out, Coetzee would be an obvious replacement while the uncapped Jasper Wiese or Dan du Preez could also fill in at the back of the scrum.

Last weekend’s “fire pit accident” that led to burns for two prominent Springbok players is thankfully not too serious. But it has put Damian de Allende and RG Snyman in the pantheon of dumbest sports injuries.

Springbok centre De Allende has admitted that burns he suffered to the face, arms and legs were the result of fooling around with petrol.

A crackling fire, four rugby players who might or might not have enjoyed a few beverages, and a container of petrol. What could go wrong?

A media statement from Munster was vague on detail, but De Allende gave a little more insight to Brenden Nel of SuperSport.com, admitting that the quartet were fooling around with petrol.

De Allende revealed that the injuries were thankfully not as bad as initially feared, which is a huge relief for the players, Munster and, of course, the Springbok management.

Snyman and De Allende may have displayed poor judgement around a fire, but they are key figures in the Bok set-up. De Allende in particular has been in great form in the PRO14 Rainbow Cup and, barring injury, will start against the Lions.

“Yeah, they thought it was a lot worse when we went into hospital on Saturday night, but when we saw the specialist on Sunday he said it wasn’t as bad as they got told,” De Allende said. “We should be okay in a few weeks, hopefully.”

De Allende’s admission raises a lot of questions, such as why they were playing with petrol around an open fire, was it a prank gone wrong and were they inebriated at the time?

Regardless, they have now entered the pantheon of strangest, and frankly dumbest, sports injuries of all time. The Munster four have perhaps shot to the top of a dubious list against some strong contenders.

The unofficial top spot, until the past weekend, was held by Welsh hooker Scott Baldwin. On a tour in South Africa with the Ospreys, who were set to play the Cheetahs in Bloemfontein in 2017, Baldwin nearly lost a hand to a bite from a lion.

The tourists visited a lion sanctuary and Baldwin put his hand through the cage to pet the seemingly docile cat. Naturally, the young male took exception to the petting and bit the hooker.

The player did not receive too much sympathy from Ospreys coach Steve Tandy (who is a part of the 2021 British & Irish Lions management) once it became apparent that he would make a full recovery.

“It was pretty stupid on Scott’s behalf and he is pretty lucky… I don’t know what sort of wildlife show Scott has been watching where you can pat a lion on the head as if it’s a kitten,” Tandy told the media after the Ospreys lost 44-25 to the Cheetahs.

“It’s probably one of the silliest things I’ve ever been involved in, but thankfully he is okay and hopefully he will be back up and running in the next couple of weeks.”