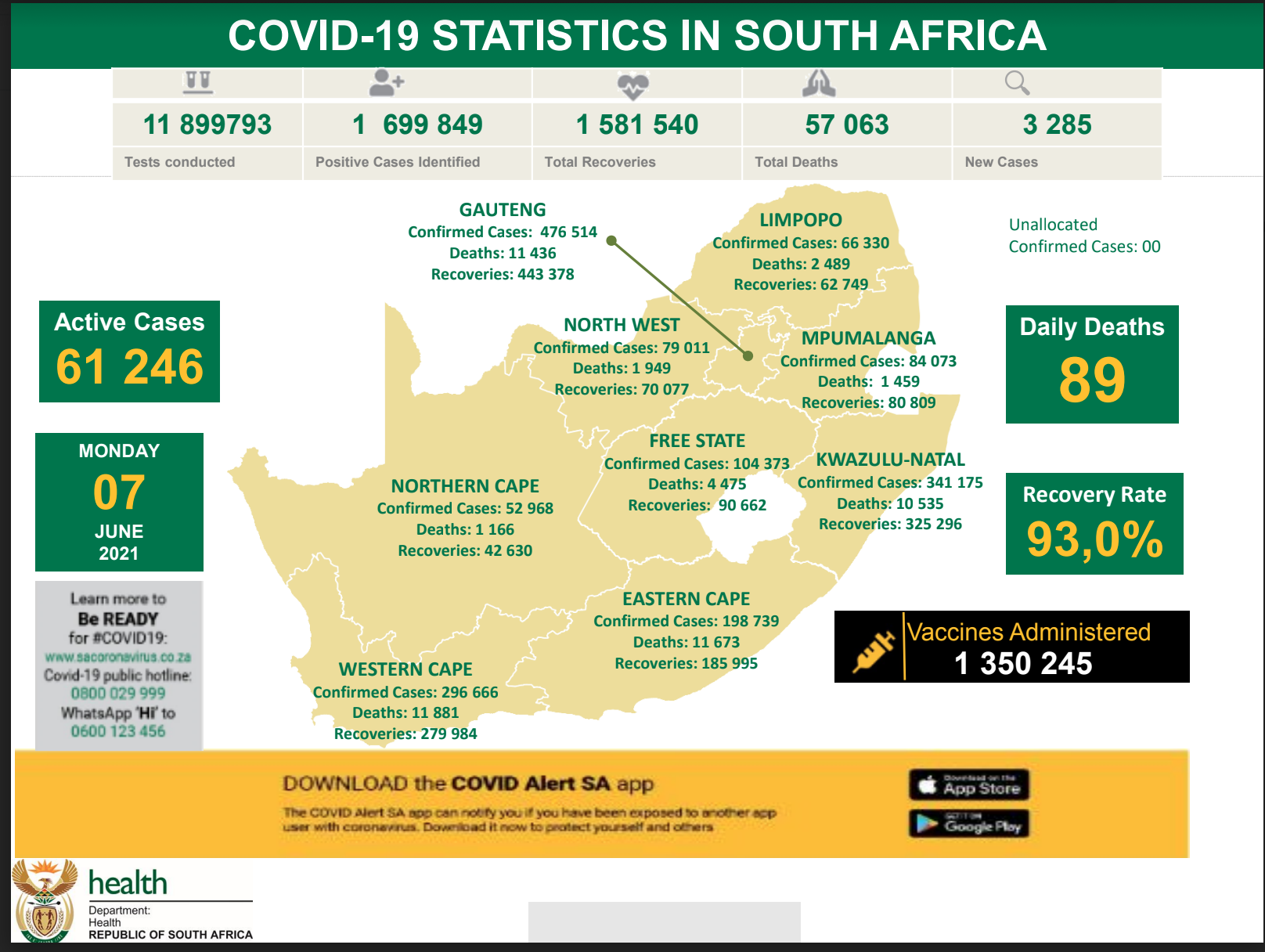 Global infections are falling dramatically, with the US reporting the lowest number of daily Covid-19 cases since March 2020. Worldwide infections for the week ended on Sunday were also the lowest in almost three months.

Despite the trend, rising cases in places from Uganda to Indonesia are a reminder that the pandemic won’t disappear any time soon. The UK’s health secretary said it’s too early to say whether a planned loosening of rules on 21 June can go ahead.

Italy is aiming to vaccinate 80% of its population by September, and Indian Prime Minister Narendra Modi announced free shots for all adults. Moderna applied for a conditional marketing authorisation in the European Union that would allow its vaccine to be given to adolescents.

Governor Andrew Cuomo said New York schools will no longer require children to wear masks outside, including during recess. He said any outside mask mandates will be left up to a local school district, a policy he said was approved by the Centers for Disease Control and Prevention. The governor said lifting the outdoor mask mandate would allow the state to align camp and school guidance.

Airlines from Britain and the US issued a joint plea for the resumption of travel between the two countries, saying government curbs on the world’s most lucrative air route are holding back an economic recovery.

Leisure and business trips could restart without undermining efforts to combat Covid-19, the heads of Delta Air Lines, United Airlines Holdings, American Airlines Group and JetBlue Airways said on Monday. They were joined by counterparts from British Airways and Virgin Atlantic Airways.

While carriers have been pitching for a resumption of transatlantic travel since last summer, the latest push comes days before President Joe Biden is set to attend the G-7 summit in England.

India to give free vaccines to over-18s

Prime Minister Narendra Modi announced in an address to the nation free shots for all adults, a move prompted by criticism of his administration’s handling of India’s deadly second virus wave and a botched vaccination roll-out.

In a half-hour address on national television, Modi said all Indians above the age of 18 will be vaccinated free starting on 21 June, vowing to speed the inoculation drive. His administration will also procure the shots for the states, reversing an earlier policy of asking the provinces to compete for supplies for certain age categories.

The South Asian nation has administered 232 million doses since the beginning of the world’s biggest vaccination drive that began on 16 January, with 3.4% now fully immunised. At this pace, it will take another 22 months to cover 75% of the population, according to Bloomberg Vaccination Tracker.

People are less likely to transmit Covid to their spouses a few weeks after getting their first dose of a messenger RNA vaccine, according to a study from the Helsinki Graduate School of Economics.

Two weeks after a recipient’s first shot of Moderna or Pfizer-BioNTech, their spouses showed 8.7% fewer coronavirus cases than those of unvaccinated people in the research. After 10 weeks, the indirect effectiveness climbed to almost 43%, according to the scientists, who linked several Finnish administrative data sets to try to assess the vaccines’ indirect effectiveness.

Moderna applied for a conditional marketing authorisation in the European Union that would allow its vaccine to be given to adolescents after the company found the shot was highly effective in the age group.

Moderna said on Monday it had filed for the clearance in 12- to 17-year-olds with EU regulators and was planning to apply for the equivalent status — an emergency-use authorisation — with the US Food and Drug Administration. The company has also asked Canadian regulators to authorise the shot for that age group.

Uganda’s government ordered a six-week closure of schools and places of worship, alongside restrictions on public transport between regions, to contain a fresh flood of Covid-19 infections.

Infection rates in the East African country, which first imposed a lockdown from March to September 2020, have climbed 26% since the start of May, to a total of 52,935 cases by Sunday. Deaths have risen about 12% to 383 during the period, according to the Ministry of Health.

Indonesia added 6,993 cases on Monday, the most since 4 March as the government warned that new infections are set to keep picking up until June or July.

The expected resurgence after the Eid holiday in late May could last for about five to seven weeks as people gradually return from their home towns, Health Minister Budi Gunadi Sadikin said. About half of the 72,000 beds allocated for Covid-19 patients have been filled, he added.

“In order to reach our target we cannot waste resources, people, time,” he said. “We need to gradually move the vaccination campaign from central hubs to local structures, closer to citizens.”

Figliuolo said Italy needs to deliver 550,000 shots a day to hit its target, a level it surpassed on Saturday when 600,000 people were inoculated.

China’s exports continued to surge in May, although at a slower pace than the previous month, fuelled by strong global demand as more economies around the world opened up. Imports soared, boosted by rising commodity prices.

European Union Commissioner Thierry Breton called for reciprocity from the US in allowing vaccinated visitors into the country without having to self-isolate.

US tourists will be able to come to the EU this summer after they have been fully vaccinated, he said on Monday in an interview on RTL radio.

“We want reciprocity because there is still a requirement for quarantine in the US,” he said.

Fresh Covid-19 cases for the week ended 6 June were the lowest since mid-March, at three million, according to data from Johns Hopkins University. Weekly cases worldwide have been declining for six weeks as the outbreak in India wanes and global vaccination efforts ramp up.

The US reported the lowest number of daily cases — 5,455 — since March 2020, when the coronavirus began its rapid spread across the country.

The global death toll is also easing, falling from a peak of more than 92,000 a week at the end of April to less than 80,000 in the last week of May. A drastic revision of Peru’s fatalities — the country more than doubled its official Covid death count — skews comparisons for the latest week.

Hong Kong’s vaccination rate picked up last week, with a record 31,400 people receiving their first doses on Saturday. The increase came after the government announced a campaign to accelerate inoculations by September and as major companies and restaurants started offering incentives including cash payouts and extra time off.

UK Health Secretary Matt Hancock said it’s too early to say whether a planned easing of restrictions on 21 June can go ahead, as ministers continue to weigh the threat of a potential fresh wave of the pandemic.

“We’ll be looking at all of the data over the next week,” Hancock said on Sky News on Sunday. “We are not saying ‘no’ to the 21st of June at this point.”

A final easing of restrictions has been thrown into doubt by the rise of the highly transmissible Delta variant first identified in India, which is now the dominant strain in the UK. There were 5,341 new cases of coronavirus reported on Sunday, a 65% increase compared with the same day a week ago. DM