The brutal truth of Black life in Amerikkka 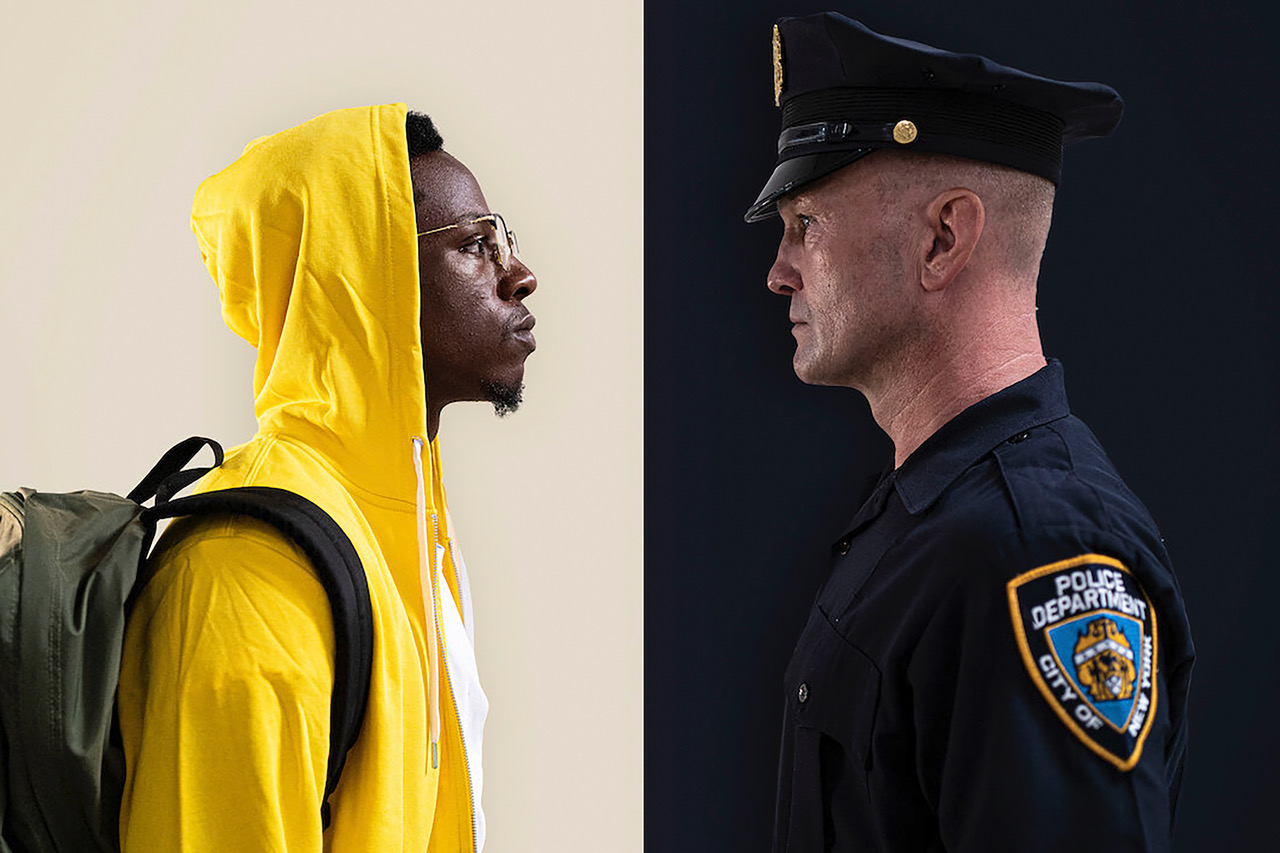 The film Two Distant Strangers is a vivid depiction of the deadly time loop in which both the United States and the rest of the world are stuck when it comes to police violence.

Carter James is having what looks like a beautiful morning. As he walks out of an apartment building after a one-night stand, he lights a cigarette, puts on his earphones and starts walking. He is beginning what will be one of many attempts to get home to his lovely dog Jeter. Little does he know his life is about to end as he finds himself a victim of the senseless police violence plaguing the United States and the rest of the world.

While James is suffocating and screaming “I can’t breathe” during the graphic scene in Two Distant Strangers, the police officer’s facial expression displays a disturbing level of nonchalance from a person who’s about to end another’s life. James has neither broken the law nor threatened the police officer, but the cop insists he is guilty.

It’s a story we’ve heard and seen way too many times. George Floyd, whose death by a police officer kneeling on his neck was captured on film and shared on social media, sparked a new wave of Black Lives Matter protests in the US that spread to other parts of the globe in 2020.

“As a writer and director and just someone who considers themselves an artist, it’s our job to reflect the time that we live in, the world that we live in,” Travon Free, the director of Two Distant Strangers, recently told entertainment magazine Complex in an interview about the Oscar-winning film.

“Everyone is not entirely capable of doing that in a way that resonates with the world at large. I was experiencing what was happening last summer and was watching what was happening. I was going to the protests. I was in one of the more riotous protests last year when the police were shooting rubber bullets at people, and people were throwing things back on Fairfax [Avenue] in [Los Angeles], and I got hit in the head with a bottle. It was scary. But it felt important.”

In Two Distant Strangers, after multiple attempts to get home to his dog, James realises he’s stuck in a time loop. No matter what he does, once he steps into the streets his fate is the same: he will get killed by police officer Merk.

With the short film, Free is showing that, as a Black person, there’s very little (if anything) you can do to avoid getting killed by law enforcement officers. Trayvon Martin was just walking home from the store; Tamir Rice was playing in a park; Breonna Taylor was sleeping in her bed.

In South Africa, Collins Khosa was spending time with his family in his own yard. Mthokozisi Ntumba was on his way home from the doctor. Nathaniel Julius was on his way home from the shop. Lindani Myeni was just sitting in a car. By the time this article is published, it’s highly likely there will be more similar cases of senseless police violence, most of the victims Black men, and Carter James stands as a metonym for the many.

In a compelling portrayal, James is played by New York rapper Joey Bada$$.

Bada$$ is a Black man who raps extensively about the issue of police violence and racism in his music, especially on his 2017 album, aptly titled ALL-AMERIKKKAN BADA$$. The emcee, who was 22 at the time he made the album, addresses police violence and other social ills such as systematic oppression and its consequences on all Black people. While performing some songs from ALL-AMERIKKKAN BADA$$ at South African music festival Oppikoppi in 2017, the rap star mentioned it was important to him to get to perform such songs on the continent.

Land of the free

Just like Two Distant Strangers, the visuals for Land of the Free, the lead single on ALL-AMERIKKKAN BADA$$, use the sci-fi genre to tell a story with an ending similar to the film’s.

In the music video, Bada$$ performs on location on a plain, his slinky figure gyrating with the horizon behind him, his swagger a symbol of freedom itself as he laments the present state of affairs while still showing optimism. He raps:

Can’t change the world unless we change ourselves
Die from the sicknesses if we don’t seek the health
All eyes be my witness when I speak what’s felt
Full house on my hands, the cards I was dealt
Three Ks, two As in AmeriKKKa

As the short film echoes, in one of the music video’s storylines, the rapper’s warm and carefree persona juxtaposes a police force hellbent on violence against Black people. Towards the end of the video, a group of Klansmen replace their hoods with police caps – as goes the modern aphorism and all its variants. The reason one never sees the police shooting members of the Ku Klux Klan is the same reason one has never seen Superman and Clark Kent in one place at the same time.

In one of the music video’s scenes, Bada$$ performs between a row of America’s racial minorities all dressed in black and a row of police officers standing opposite them. When the cops start opening fire, murdering the people in cold blood, Bada$$ seems to be protected by an invisible shield of impenetrable space that deflects the bullets superhero-style. The few minorities who stand in his line when the shots ring out are saved.

It starts to appear as though he’s winning this battle when he walks along the line of cops and succeeds in quelling them and they submit to him, lowering their guns. His superpower? Just his good intentions. He turns to walk away along with some of the survivors and, just like James in Two Distant Strangers, the story ends with him getting murdered.

ALL-AMERIKKKAN-BADA$$ was released in the early stages of Donald Trump’s presidency. Bada$$ was among a slew of artists who were openly anti-Trump. But he told CNN in 2017 that he was seeing a “silver lining” to the dark cloud that was the Trump era in the surge of “more uplifting” socially conscious music.

“The music has taken a shift now. I’m not the only artist that feels this way,” he was quoted as saying. “Everyone is starting to feel somewhat responsible because we’re realising the power that we have as individuals, as musicians, as people with high influence.”

In the past few years, artists of all kinds have used their platforms to condemn injustice, be it Selena Gomez, Lady Gaga and Shawn Mendes lending their Instagram accounts to Black Lives Matter activists to create awareness among their millions of followers, or a trap rapper like Lil Baby taking some time off from “rapping about killing and dope” and opting to “telling my youngins to vote”, even if it’s just in one song (the powerful The Bigger Picture, whose music video was shot during the Black Lives Matter protests of 2020). The music video features footage of protests and makes sure to show a large number of placards with messages condemning police violence and its parent, systemic racism.

West Coast rapper YG’s FTP (Fuck the Police), released around the same time, is a 21st-century version of NWA’s Fuck Tha Police (1988), a song in which the gangsta rap group confronted police brutality with the explosiveness of Run DMC and the fortitude of Public Enemy.

Even in his solo stint, NWA member Ice Cube would stick to speaking truth to power. His first solo album, Amerikkka’s Most Wanted, to which Bada$$ pays homage with the title ALL-AMERIKKKAN-BADA$$, saw Ice Cube sharing eye-level observations of Compton and coming to the realisation that the provenance of such acts was systematic racism (“Why there more niggas in the pen than in college?” he rapped on the song Atomic Dog).

Ice Cube’s album was released in 1991, Bada$$’ in 2017. The common factor in this deadly equation is that, as a Black person in America, you stand a good chance of getting murdered by the police. Anywhere, anytime and, sadly, for any reason.

“Even though the story itself is a work of fiction, it’s based on the lives or group of people,” Free told Complex. “So that was important to me that it’d be representative of reality because I wanted people to be like, ‘This really happens?’ If you’ve somehow managed to miss what’s been happening, I want people to see this and go, ‘Well, the police wouldn’t like breaking your door and have the wrong house.’ Oh yeah, they’ve done it multiple times. They do it a lot. And have killed people in many of those instances.”

In the film, even after a humanising conversation between the protagonist and antagonist in which they get to know each other a bit, Merk still pulls out his pistol and shoots James anyway. It’s the loop we are currently stuck in. Just as it was announced that Floyd’s killer, Derrick Chauvin, was found guilty of murder, 15-year-old Makhia Bryant was killed in Ohio.

Two Distant Strangers can be streamed on Netflix.