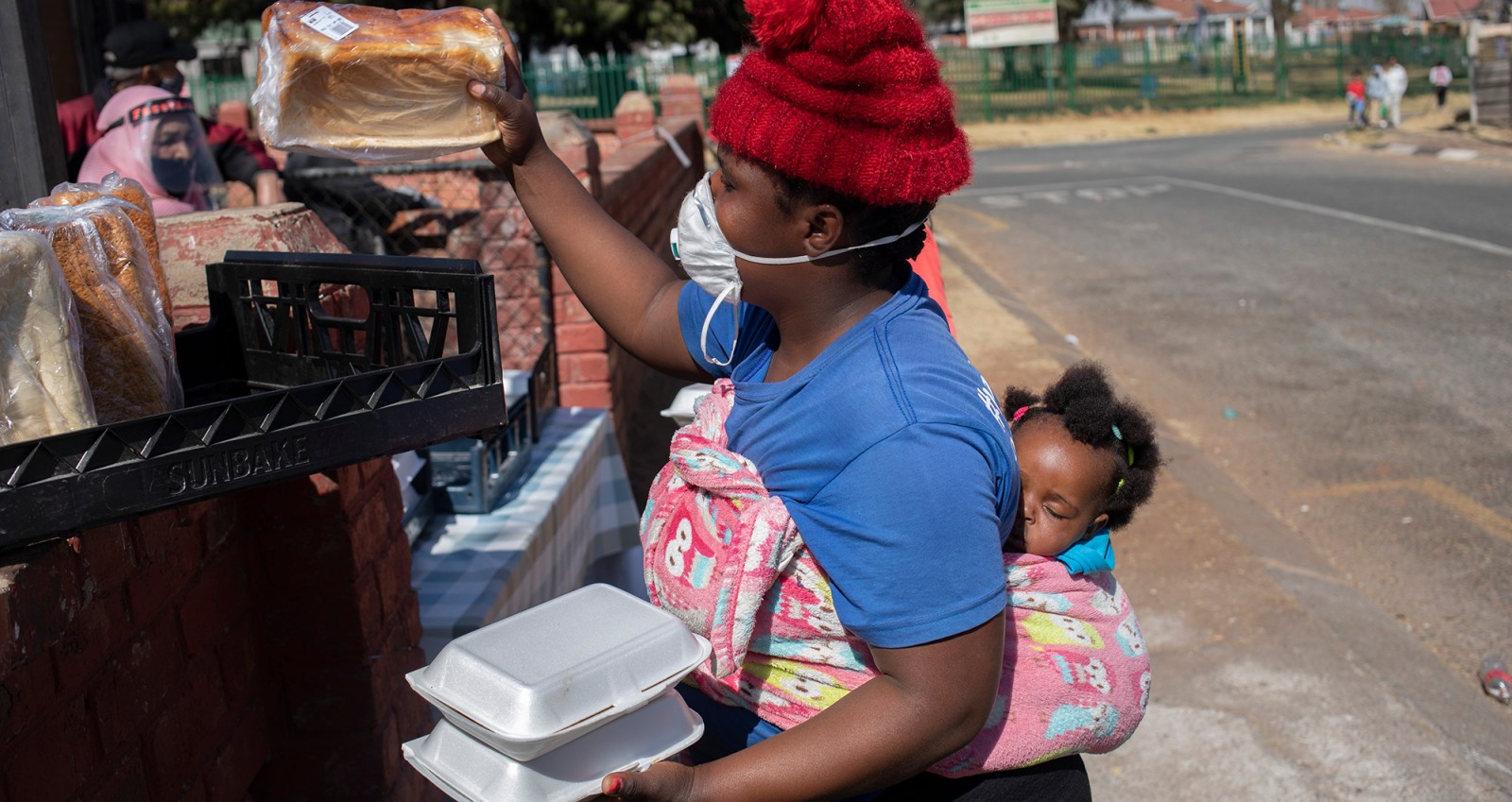 Women receive bread at a food handout at the Hunger Has No Religion feeding scheme in Johannesburg on 1 August 2020. (Photo: EPA-EFE / KIM LUDBROOK)

The impact of Covid-19 has not only exacerbated the inequalities between men and women, it has also widened the income gap between women in lower-income jobs, such as domestic workers, and those who occupy high-paying positions in public office.

Thandeka Nomvele is a research assistant at the University of Johannesburg’s Institute for Pan-African Thought and Conversation.

The outbreak of Covid-19 has affected the socioeconomic environment negatively both globally and nationally. On 11 March 2020, Covid-19 was officially declared a pandemic by the World Health Organization (WHO). The South African government imposed a national lockdown to halt the spread of the pandemic later that month, permitting only essential services.

On 2 June 2021, global Covid-19 infections stood at a staggering 171 million confirmed cases with a death toll of 3,57 million. On the same day, SA reported 3,614 new cases, taking the total cases to 1.67 million and the death toll to 56,501. As with all pandemics, Covid-19 has had a strongly gendered impact across many sectors of life. Although more men have died from the pandemic globally, women have drawn the short straw when one assesses the impact of the virus on the labour market – and SA has been no exception.

SA culture is patriarchal, which was strongly influenced and reinforced by colonialism and apartheid. This has resulted in the marginalisation of women in most sectors of the economy and has influenced the types of careers and positions women hold in the workplace. This, in turn, has affected the income that women can generate.

Section 9 of the Constitution guarantees gender equality and freedom from discrimination. Other acts were subsequently passed to ensure gender equality, such as the Promotion of Equality and Prevention of Unfair Discrimination Act, 4 of 2000 (Pepuda) and the Employment Equity Act, 55 of 1998 (EEA). Yet, the reality of many South African women does not reflect these grandiose ideals.

As Covid-19 sweeps across the economy, employment opportunities have dwindled, and job losses have soared with unemployment currently at a record 33%. According to Statistics SA’s Quarterly Labour Force Survey, women are less likely to find full-time, formal paid employment than men. In 2020, 51% of black women were officially unemployed and had to create work for themselves in the informal sector.

It comes as no surprise, therefore, that women have been the most negatively affected by the pandemic as many work in sectors that were not operative during the lockdown.

The National Income Dynamics Study – Coronavirus Rapid Mobile Survey (NIDS-CRAM) May/June 2020 report on the first wave of the pandemic painted a grim picture of the impact the virus has had on women within the first month of national lockdown. Although women occupied about 47% of employment in February 2020, they accounted for approximately 67% of the job losses between February and April 2020, and the number remained unchanged by June 2020.

Thus, of the three million jobs lost in this period, approximately two million were held by women. The second and third wave NIDS-CRAM reports showed more signs of stability in employment security and, by October 2020, important economic sectors were recovering and performing beyond February levels. Furthermore, it seems that the initial employment gap between men and women did not worsen as a result of Covid-19 and the subsequent national lockdown. However, the loss of employment for women remains a major setback for the strides made in closing the gender gap between men and women.

Unpaid work, such as child and elderly care, and household responsibilities, has also increased since the initial lockdown. Given that more women work from home, they have been disproportionately affected in relation to their male counterparts. According to the 2018/19 Department of Women report, the burden of unpaid care work falls by and large on women. According to Stats SA, since 2019, the responsibility of unpaid work is further compounded in female-headed households, which comprise 41.8%, or approximately 7,2 million households in the country. These women depend on their sole income to survive, while simultaneously struggling to focus on other household work, which usually falls squarely on them.

This pattern is especially true for women in rural areas who have no formal employment. Unfortunately, the 2020 NIDS-CRAM second wave report shows that while these women bear the burden of unpaid household and care work, they make up only 34% of all recipients of the Covid-19 Social Relief of Distress Grant. This is most likely the result of a grant caveat, as the benefit cannot be claimed by recipients of other child social grants.

This is disturbing given that women, who experience difficulty in finding and keeping full-time employment, and who are dealing with gender discrimination in terms of wages and the burden of care work – or are engaged in menial work – are at the same time exempted from the Covid-19 stimulus packages during this difficult period. For a supposedly progressive and gender-aware government, this is a glaring oversight. The impact of Covid-19 has not only exacerbated the inequalities between men and women, it has also widened the income gap between women in lower-income jobs, such as domestic workers, and those who occupy high paying positions in public office.

While the pandemic continues to shed light on the government’s inability to implement gender-sensitive policies and exposed the extent of the structural inequalities that exist in the society, it has also created a crucible in which to reform current policy. As Nigerian writer Chimamanda Ngozi Adichie eloquently puts it in her 2014 book, We Should All Be Feminists, “culture does not make people. People make culture. If it is true that the full humanity of women is not our culture, then we can and must make it our culture.”

In this light, the government should adopt a culture that promotes employment retention and time-bound funding schemes, particularly for women. There is also a need to adopt measures aimed at recognising, reducing, and reallocating the burden of unpaid care work, which is borne largely by women, to enable an increase in household income. DM