ShotSpotter: Using technology to make the streets a bit...

ShotSpotter: Using technology to make the streets a bit safer in the Eastern Cape’s Gqeberha 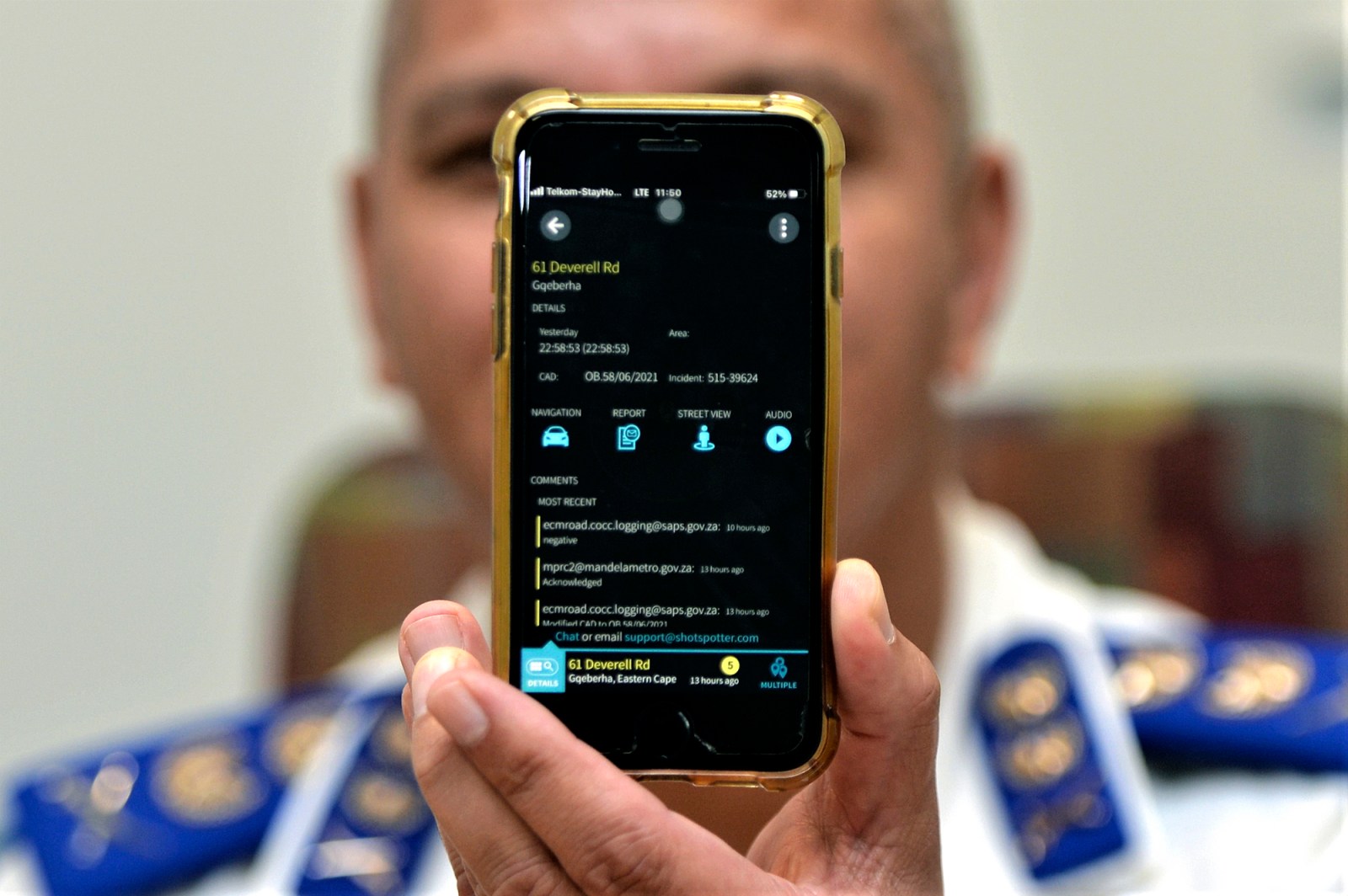 An example of the message that ShotSpotter sends after shots have been fired. (Photo: Deon Ferreira)

One of the factors that makes ShotSpotter necessary for the fight against gun violence was the 'mental block' of community members who are frequently exposed to the trauma of gunfire.

“That is what the officer gets on his phone 30 seconds after the shots are fired,” said Best, himself a retired police officer and legendary in search and rescue circles.

The app also shows the house where the shots were fired, using Google Maps.

The message is what officers receive when ShotSpotter alerts them that shots have been fired in parts of Helenvale where they have been running a successful pilot project to shorten response time, increase visible law enforcement and get help to victims faster.

The sound on the app is of a volley of shots fired on 23 May in Deverell Road, Helenvale, in which a 16-year-old was injured. The police and the metro police reached the crime scene within minutes of receiving the alert and found a boy with a gunshot wound to his left thigh after having been caught in the crossfire. The victim was immediately stabilised and rushed to Livingstone Hospital and is expected to make a full recovery.

“We are pleased that ShotSpotter is not only helping save lives but is also assisting law enforcement officers to bring these criminals to book. The quick reaction to last week’s shooting meant the police were able to gather valuable evidence that will hopefully lead to the swift arrest and successful prosecution of the shooters,” said Ralph A Clark, president and CEO of ShotSpotter.

“The pilot project was started in Helenvale in 2017, with the understanding that at some point we [would] move over to a full-scale tender process to cover the whole of the metro. ShotSpotter uses technology that does acoustic gunshot detection.

“It picks up the sound… [which] then gets pinpointed and a response unit can respond to it,” Moses said.

“We have installed it in the Helenvale area with the idea to roll it out into other major crime areas specifically where gunshots and firearms are used to commit the offences.

“If you track how ShotSpotter impacted on that specific area, there is a lot less gunfire now. We are not saying it has eradicated it, but it made our response to it much quicker… It partially gives the community a sense of feeling a little bit safer. We are not there yet. We need more manpower and more technology in order for us to have a conclusive system.

“Since we installed ShotSpotter in Helenvale we have had zero gunfire days, which is what we strive for. If we can link it to CCTV it will make a big impression because then if you do stand outside and shoot we will be able to take a picture of you, follow you, arrest you and put you through the court system properly.

“We are looking for the next space where we want to move to. Bethelsdorp is the Eastern Cape’s murder capital. We would love to go there next.

“On the first night that we installed ShotSpotter for the pilot project, there were hundreds of shots fired in a week. We are down to 49 incidents with 104 rounds for April. If we compare that with two years back when we started, ShotSpotter was picking up [more than] 400 rounds fired a month,” Best said.

“In January there was a man shot in the stomach. The metro police officers responded. They got there. He was in serious condition. He was dying. We managed to get hold of an ambulance. From the time the shot was fired it took 11 minutes to have him admitted to hospital. His life was saved,” Best said.

“The technology can determine if a sound is gunfire, a firecracker or a car backfiring,” Best added.

“Two weeks ago I took a walk in Helenvale and I was struck by the gratitude of the community. There are children playing in the streets. We know Friday evenings and 10pm to 11 pm are the peak hours for shooting in Helenvale,” he said.

Moses said one of the factors that makes ShotSpotter necessary for the fight against gun violence was the “mental block” of community members who are frequently exposed to the trauma of gunfire.

“Once you get there, community members will often tell you they did not notice anything. There is a mental block. The problem is that gunshot incidents are only reported when someone is hit. If someone runs up the street firing five or six rounds, people will just say: ‘Oh, we will fix that window. If the police come, the police come.’

“Now what we have done, and that is part of our plan, is that when we respond we request officers to get out and speak to the community and get names of people.”

Best said he hopes the new budget for the metro, to be debated this coming week, will be passed, as it makes provision to resurrect the CCTV camera project and this will enhance the work done by ShotSpotter technology. DM168