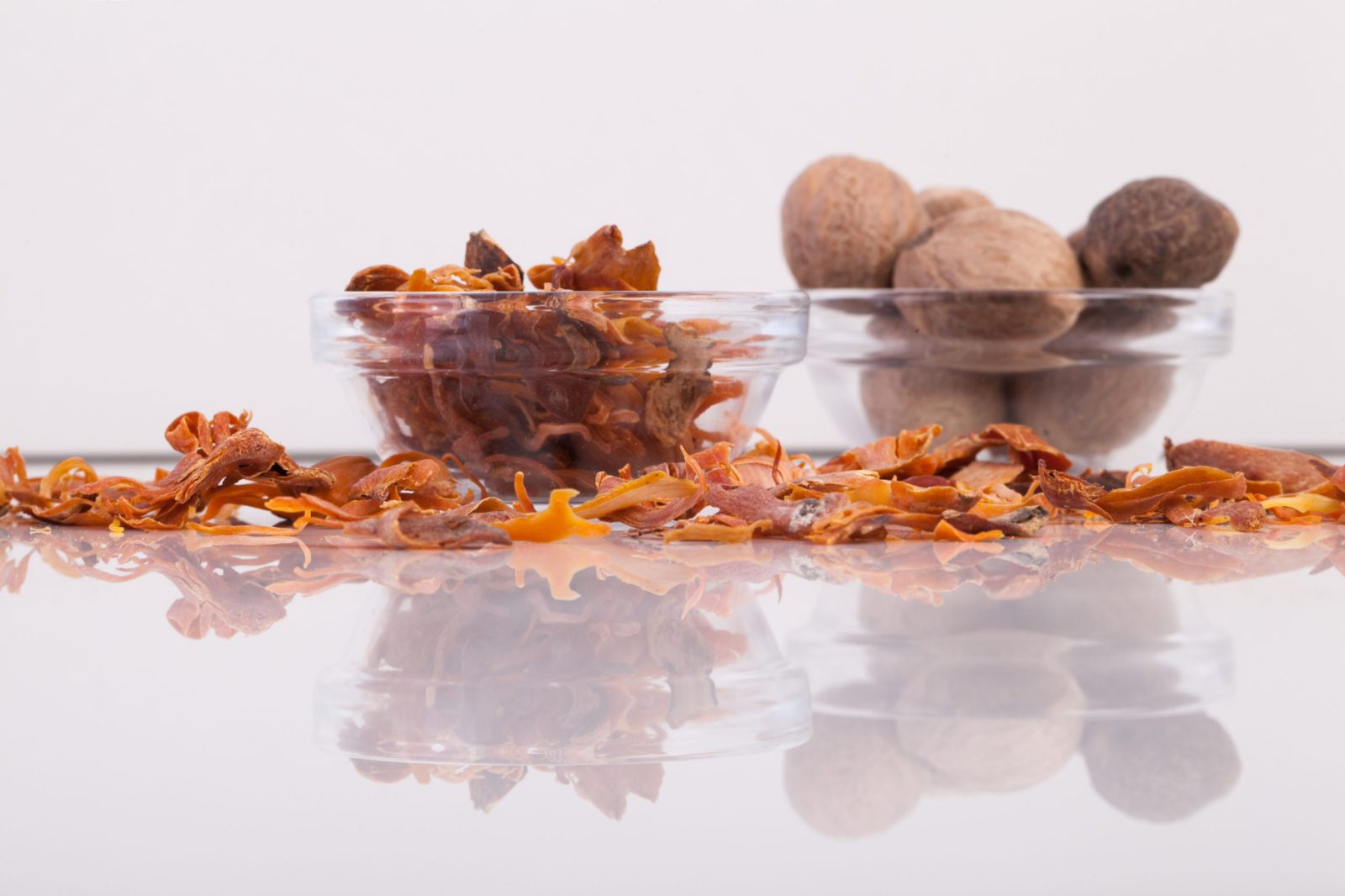 Mace, like its first cousin nutmeg, was one of the most important spices employed in traditional Cape cookery, figuring in the oldest recipes. The popularity of mace has gradually waned, to the point today where most people look quite blank if you talk about it. Let’s bring it back.

Try this recipe with mace in it, or this one

Mace? No, not the spray. The spice. You know nutmeg, right? Well, that’s the stone of the fruit. Around the stone is a lacy, alien-like reddish covering, That’s mace, and it’s a spice in its own right. It has long fallen from grace, but that doesn’t mean we cannot try to bring it back.

Even in my small town, I managed to get some (quite a lot, actually), simply by asking a friend who owns a supermarket if she’d order it in for me.

The grindings and slitherings of bark and seed of the old Cape spice route were nearly always dried forms of their original natural state, with the exception of mace, wrote C Louis Leipoldt, the raw version of which was “sometimes produced privately, preserved in a thin syrup”.

“With cinnamon and pepper,” he wrote, “nutmeg and mace may be said to be the most important spices employed in Cape cookery, for they figure in the oldest recipes and are still extensively used.” He was writing in the earlier decades of the 20th century.

Leipoldt was clear as to the hierarchy of spices at the Cape. At the front of the pack were ginger, cinnamon and cassia (both, even though the barks are similar), nutmeg and mace (again, both the inner nut and outer shell), allspice (aka pimento, not to be confused with the pepper), cloves, both black and white pepper, turmeric, chillies, saffron and garlic. That’s the top echelon, and mace is right up there.

Everything else, and that includes spices we now use much more widely, were secondary, and they included cardamom, coriander, cumin, fennel and dill, all of which were used at the old Cape but not as commonly. Among those which were “not ingredients at the Cape” in Leipoldt’s day were capers, fenugreek, star aniseed (which we now call anise), juniper berries, and valerian.

He wrote: “A rare Oriental flavouring, zedoary, is mentioned in a few old recipes, but was never commonly used, and its neglect in modern days is no loss because it can easily be dispensed with, as can also that other culinary absurdity, asafoetida…” Zedoary can still be obtained in Durban’s Indian spice shops, and asafoetida is always available there, and adds an indefinable something to certain curries. But it takes the ministrations of a seasoned KZN cook to know how and when to use it.

On nutmeg and mace, Leipoldt wrote that though they are “apparently so utterly different, are integral parts of one another”. The nutmeg is the seed, while mace is its reddish lacy covering which, peeled off, is dried and turns a woody yellow.

The popularity of mace has gradually waned, to the point today where most people look quite blank if you talk about it. Among the little jars of spices on supermarket shelves you’re unlikely to find it, although it still appears in speciality spice stores. Leipoldt lamented the demise of the syrup-preserved “ripe fruit” in thin syrup, as the syrup “extracted much of the essential oil of both the covering and the kernel and served admirable as a concentrated flavouring for puddings and sweet dishes”.

That the flavours of nutmeg and mace have similarities does not mean they are interchangeable. Nutmeg is stronger and sweeter and has been likened to a mix of cinnamon and pepper. To that, for mace, add coriander and citrus zest, with the element of nutmeg at its core. That’s quite a spice, you must admit.

The difference is distinct, although in many recipes you could substitute a larger quantity of mace than the amount of nutmeg called for. A tablespoon of ground mace is equivalent to a teaspoon of ground nutmeg; much milder, or three times milder if you like. Mace, in hard form, will retain its flavour for much longer than a whole nutmeg. In either case, it is best to grind them fresh immediately before use to get their optimum flavour.

Pickling: add a blade or two of mace when pickling fish or vegetables.

Brining: add whole blades of mace to your bottled olives.

Add mace to a soup or savoury souffle, to cheese dishes (put some in a winter vegetable or potato bake), into a savoury rice dish, even into a basic meat or vegetable stock for additional flavour.

Add mace to a sweet roasted pumpkin or butternut dish.

Add a blade or three of mace to a meaty potjie to lend an intriguing underbelly of flavour to the sauce.

Mace goes well with chocolate, so you could add a blade to a chocolate sorbet, for instance, and remove it before freezing.

Use ground mace in a fruit crumble topping.

Grind fresh mace over creamy pasta such as Alfredo before serving.

Toast 3 blades of mace and a Tbsp of green cardamom pods in a pan, then grind them together to a fine powder. Use it sparingly to flavour curries and sauces, or an ice cream or custard.

Use mace as one of your spices in doughnuts and in carrot cake.