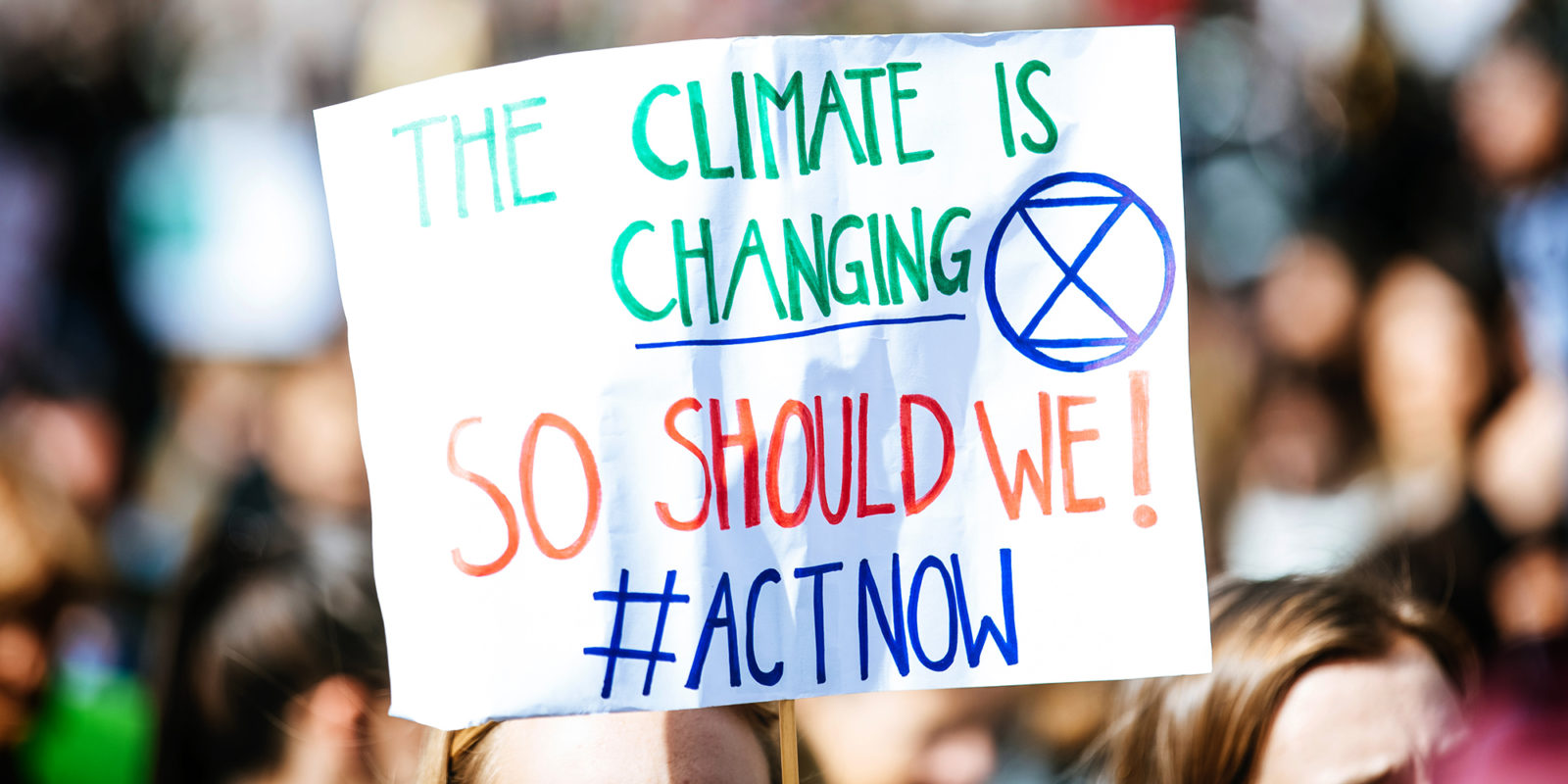 In a world that knows no environmental boundaries, how can we finally and more effectively avert the climate crisis? We need to stop seeing the threat posed by climate change as lying in the future and take immediate action. Abandoning coal and oil is what the science says is necessary — like it or not.

Oliver C Ruppel is Professor of Law and Director of the Development and Rule of Law Programme in the Faculty of Law at Stellenbosch University. He served as coordinating AR5 lead author for the Intergovernmental Panel on Climate Change and founding Director of the Climate Policy and Energy Security Programme for sub-Saharan Africa of the Konrad-Adenauer-Foundation.

The old Latin proverb “iudex non calculat” can be translated as “the judge does not calculate”. But what does this saying actually mean? Should, do or can judges and lawyers in general really not count or calculate? Certainly not.

Numbers play an immense role in law and it seems this role is growing as the law gears up to tackle climate change by means of judicial review and the better protection of the environment, both in international law and domestic legal orders. In celebration of World Environment Day (5 June), I would like to highlight some examples by means of two upcoming milestones in the light of some recent judgments related to this.

As most by now know, the United Nations (UN) Framework Convention on Climate Change was established at the Rio Earth Summit in 1992 and has almost universal membership with nearly 200 countries being Party to the Convention. The Parties usually meet every year (with the exception of 2020 due to Covid-19) at the Conference of the Parties (COP).

At COP21, held in Paris in 2015, member countries adopted the Paris Agreement and pledged to implement it through their Nationally Determined Contributions (NDCs), which set national targets for reducing greenhouse gas emissions by either 2025 or 2030. Under the Paris Agreement, nations pledged to hold the increase in average global temperatures to 2°C degrees while striving to keep the increase to 1.5°C. The NDCs will be periodically reviewed through a stocktake process that measures countries’ achievements in reducing their greenhouse gas (GHG) emissions.

All Parties to the Paris Agreement are currently requested to submit updated NDCs, with South Africa being on track for COP26 in November with its 2021 draft. This will also be important in light of COP26 negotiations when it comes to net-zero emissions by 2050, carbon market mechanisms, funding for loss and damage, and how nature-based solutions (in forests, agriculture and ecosystems) can lead to better decarbonisation and protection against climate impacts.

In this light, it is hoped that COP26 will finalise the Paris Agreement in full with the implementation of the Rulebook, negotiated in 2018 and providing operational details for this agreement; find solutions that respect human rights and allow all nations to achieve net-zero targets by 2050; mobilise the long-promised climate finance to developing countries, and ensure more industry accountability for negative impacts of their emissions on people and environment.

Regarding the latter, a Dutch court handed down a historic judgment on 25 May 2021 when it ordered the oil company Shell to make a more significant contribution to climate protection. Shell must reduce its CO2 emissions by 45% by 2030 compared with 2019. It is the first time that a private company has been held liable for its climate crisis impacts.

Also, governments are increasingly measured in terms of numbers regarding climate action, deaths prevented and keeping GHG emissions promises, etc. In 2019, for instance, the Dutch Supreme Court, in the so-called Urgenda case, ruled that the government violated the rights of its citizens (eg, the right to life) under the European Convention on Human Rights by failing to take sufficiently ambitious action to reduce GHG emissions. The court ordered the government to make faster and deeper emissions cuts.

Such climate cases are on the march all over the world, and courts are applying their legal minds to the recommendations of science in terms of numbers. In April 2021, the German Constitutional Court deemed that the German Climate Protection Act of 2019 does not go far enough in reducing carbon emissions and the legal targets are incompatible with the fundamental rights of the people and particularly future generations. So courts have indeed started counting and calculating in terms of scientific legitimacy, human expectations and the planetary boundaries.

Without legal measures in place that truly aid in the control, regulation, enforcement and mitigation of and regarding climate change, the state of our planet will deteriorate.

Most nations have incorporated international norms and standards into their environmental law. Nevertheless, varying standards exist. This can be due to, among others, the resilience of the legal framework, the country’s institutional capacity, and socioeconomic pressures. In South Africa, for example, our domestic laws do respond to some transboundary challenges, but they continue to rely on a territorial understanding of environmental law, whereas climate change is, of course, global in nature.

In 2022 it will be 50 years since the first intergovernmental conference on the environment (the UN Conference on the Human Environment) was held in Stockholm in 1972. Also known as the Stockholm Conference, it was the first major UN meeting on international environmental issues, thus marking a turning point in international environmental politics. Today, almost 50 years later, it is vital to assess where we stand and what still needs to be done. It may be relatively innocuous to agree on the least common denominator regarding the late prime minister of Sweden Olof Palme’s statement in his historic speech during the plenary session of the aforementioned conference, where he said:

“The air we breathe is not the property of any one nation – we share it […].”

Although some progress has been made, the 50-year stocktaking now poses the question: Why is the overall state of the planet’s ecological health, as reported by scientists, still so heavily under threat?

Earlier this year, US Special Envoy for Climate John Kerry stated that COP26 is “the last best chance” that we have to save our planet and avoid a climate catastrophe. This meeting will decide what kind of planet we share with present and future generations. Winston Churchill once said “success is not final, failure is not fatal: it is the courage to continue that counts.”

While the saying certainly has its merits, it does not fully apply to climate change. Because failure (to act on time) may very well be fatal. This is a non-discriminating challenge unlike anything humanity has encountered before.

The 2023 NDC global stocktake will assess the combined effort of countries. It is already becoming apparent that the implementation of those policies will leave a significant emission gap towards the well-below 2°C and 1.5°C Paris goals. By 2050, the European Union, for instance, aims to be climate neutral. This is an ambitious goal that committed role models can promote. Until recently, climate law was largely the focus of diplomatic discussions, treaty negotiations and academic debates. Legal systems are based on certainties and not uncertainties, while science can afford certain levels of uncertainty.

Yet, in a world that knows no environmental boundaries, how can we finally and more effectively avert the climate crisis? We need to stop seeing the threat posed by climate change as lying in the future and take immediate action. It is true that, according to Albert Einstein, “not everything that can be counted counts and not everything that counts can be counted”. Abandoning coal and oil is what the science says is necessary — like it or not.

Having said this, what really counts in climate change depends on the legitimate interest of future generations and — if need be — jurisprudence as legal wisdom in the service of just transformation and the survival of the planet. “Iudex non calculat” was handed down from Roman law, and one could think that law was not meant to be a “counting science”.

Yet, the most important decisions of our time cannot be derived without scientific precision and determination. Sic: Iudex calculat. DM