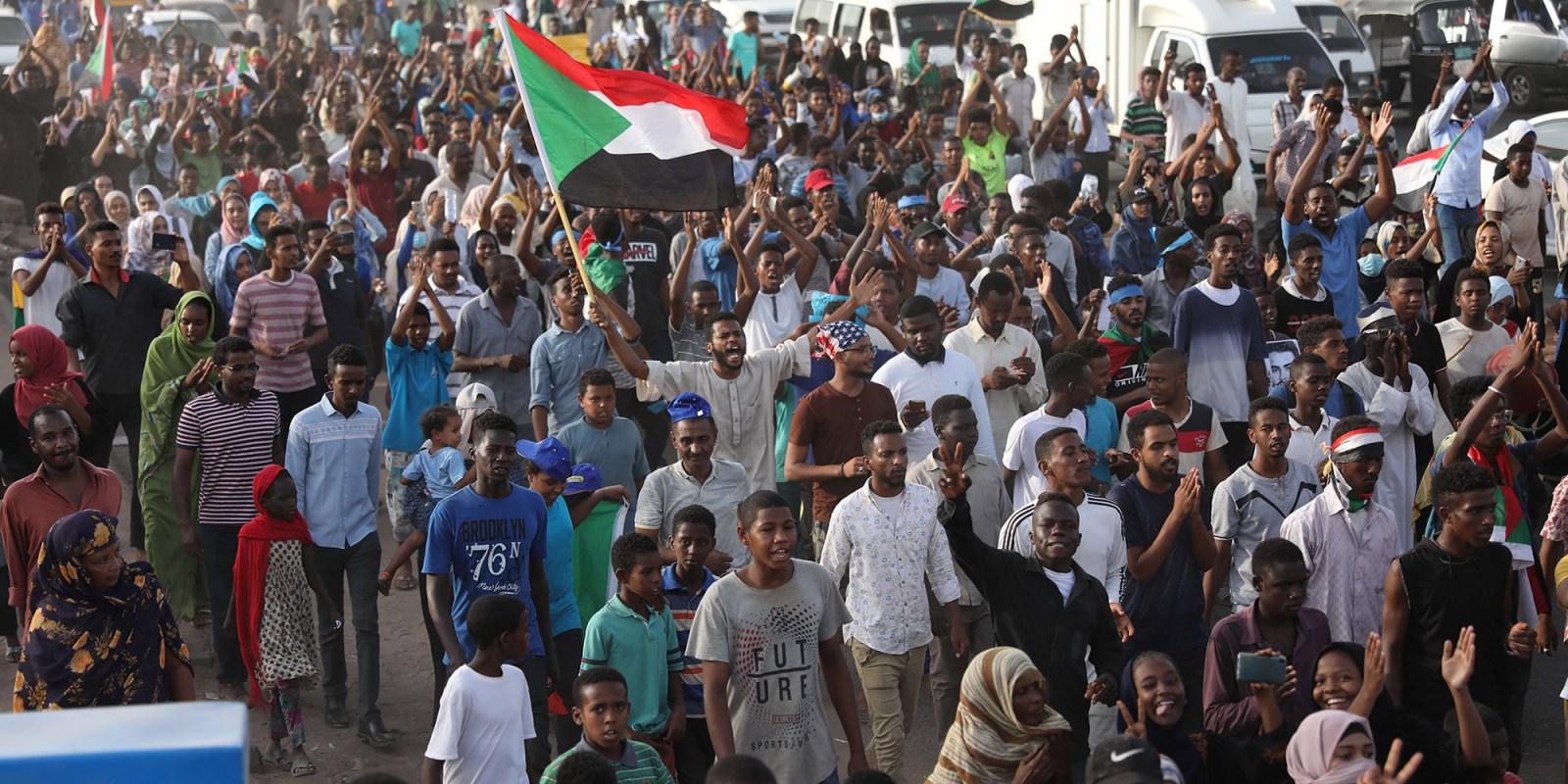 Sudanese people march on 13 July 2019 to mark the 40th day since scores of protesters were killed during a sit-in outside army headquarters in Khartoum, Sudan. (Photo: EPA-EFE / Marwan Ali)

Lessons from two previous attempts to set up democratic, civilian governments in Sudan are not being heeded.

Thursday 3 June marks the second anniversary of the massacre of protesters in front of Sudan’s army headquarters. They paid the ultimate price for what they hoped would be a political transition that would usher in peace and democratic governance. Both have eluded the country since independence in 1956.

Two years into the political transition, progress is limited and the military continues to dominate over civilian leaders. Was the 2019 revolution just another Sudan uprising? Since independence, Sudan has had four coups. Only the October Revolution of 1964 and the April Intifada of 1985 led to democratically elected civilian governments.

An Institute for Security Studies report reveals that the current transition has followed a similar trajectory to the 1964-1965 and 1985-1986 power transfers. The opportunities and problems presented this time can be better understood by looking at lessons from the past.

Four similarities underpin the success of popular uprisings in 1964, 1985 and 2019 in toppling governments: mass civilian mobilisation; successful bargaining among political elites on how to overthrow the government; civilian leaders’ ability to make deals with armed rebel groups; and political actors’ success in convincing the military to support regime change once protests gained momentum.

While the 1964-65 and 1985-86 political transitions led to the election of democratic civilian governments, both were ousted in military coups within four years. Four major missteps defined their ultimate failure.

The first was an inadequate response to economic crises that the protesting masses regarded as urgent. The current transition faces a similar problem. Since August 2019, Sudan’s economic situation has been deteriorating. The country continues to experience soaring inflation projected at 61.5% for 2020. While Sudan’s removal from the United States’ sponsors of terrorism list means it can access loans, debt relief and foreign direct investment, these have mostly been pledges rather than tangible financial support.

The second major failure of past transitions was to bring about sustained peace. Political parties and post-transition civilian governments didn’t honour peace deals with armed groups. Two years into the latest process, agreements have been signed with numerous armed groups, but major provisions are yet to be implemented. One reason is that two main rebel groups with significant troops on the ground are yet to sign.

Negotiations are underway with one of these — the Sudan People’s Liberation Movement-North. But talks with the other, the Sudan Liberation Movement (SLM), haven’t officially started. The current peace deal will be difficult to implement in the regions where these groups operate.

Negotiations were also concluded in different processes, and not all political actors agree with the Juba peace agreement’s provisions. More talks are needed to resolve outstanding issues related to establishing the legislative council, demobilising and reintegrating armed groups, and security sector reform.

Other provisions of the Juba peace deal have not yet been implemented. These include the transitional justice process and setting up a special tribunal to prosecute those accused of war crimes in Darfur. People with outstanding arrest warrants have also not been handed over to the International Criminal Court, and those who participated in the 3 June massacre have yet to be held accountable.

Among other reasons, the delays relate to Sudan’s penal law, which is yet to be revised to recognise human rights violations, war crimes and crimes against humanity as punishable by law. The establishment of different commissions meant to oversee these processes is also pending.

The third reason for the failure of previous political transitions is the lack of a shared vision for Sudan among political elites. This has been a major cause of Sudan’s inability to adopt a permanent constitution since independence.

The current deep-rooted ideological and political rifts in the Forces of Freedom and Change (FFC) alliance show that history is repeating itself. The FFC can’t agree on Sudan’s economic reform, foreign relations, legal reforms, the drafting of the constitution and other major transition issues. This has delayed these processes from advancing and significantly weakened the comparative power of civilian actors.

The fourth failure was that major concessions made with the military ultimately disempower civilian actors. Sudan currently has a civilian-led transitional government. However, substantial power resides with the military, which heads the Sovereign Council for the first half of the transition period.

As council head, the military has led vital processes in which it has vested interests. These include peace negotiations with armed rebels, transitional justice provisions that require military council members to go after their own, and economic reform. The military also leads the process to dismantle the old regime and its patronage system, and security sector reform.

The Juba peace agreement has reset the time frame for the political transition. It’s unclear when civilians are expected to take over leadership of the Sovereign Council and when democratic elections will be held.

The current transition mirrors all four of the key mistakes that derailed past efforts to establish civilian governments. For Sudan’s political transition to succeed, these problems must be addressed. Political actors need to balance the military’s power, overcome discord in the FFC and enable the transitional government to implement its goals.

Sudan’s democratic future requires a constitution based on inclusive national dialogue. For this to work, political actors from the FFC, armed groups and others excluded from the FFC must overcome their deep political divisions and find common ground. Only then will the country’s transition succeed this time. DM

Experts from the ISS, Sudan and the AU will today be discussing Sudan’s transition prospects. Register to join the debate.