Salim Abdool Karim: Journalists are crucial cogs in the telling of the complex and ever-evolving Covid-19 vaccine story 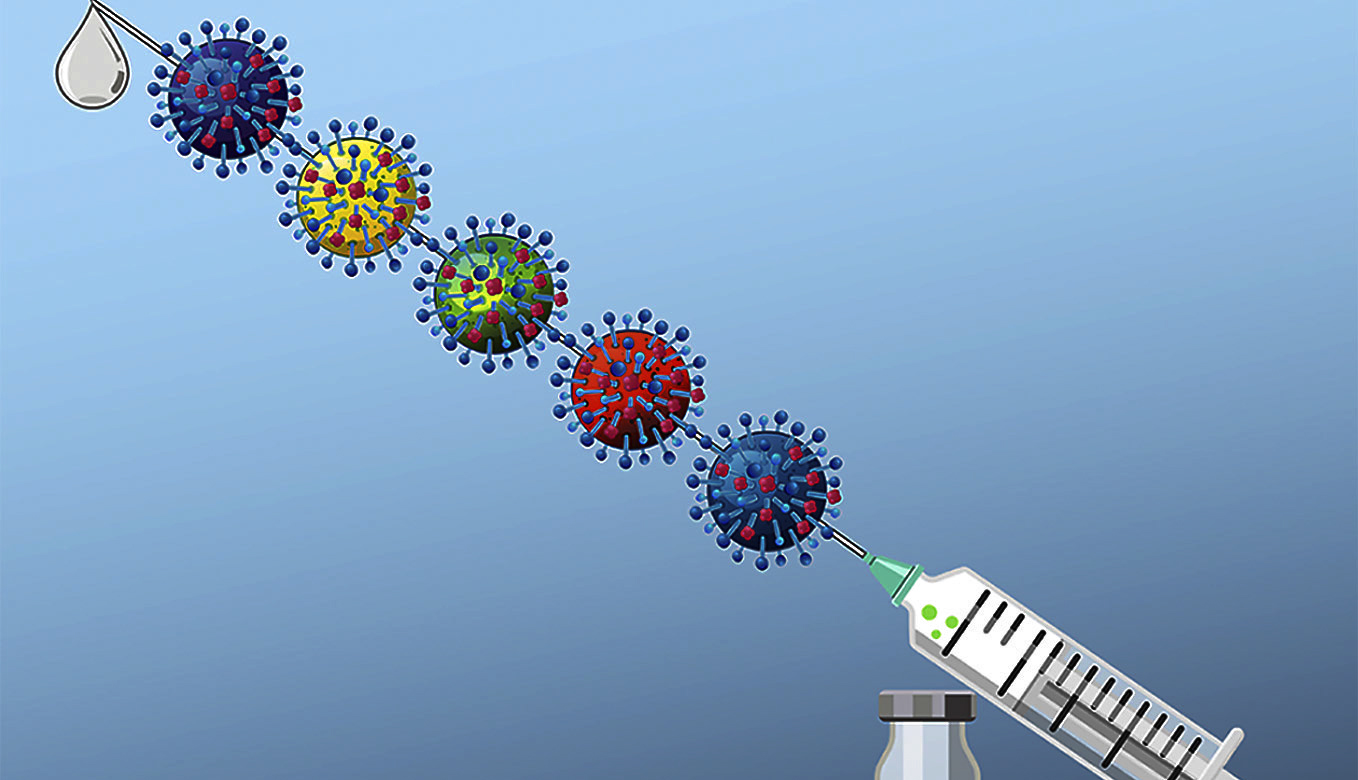 Global health experts have warned that as long as the SARS-CoV-2 virus continues to spread unchecked, it will continue to mutate and produce variants. It’s been described as a race between variants and vaccines. (Photo: pharmaceutical-journal.com / Wikipedia)

South Africa is experiencing its third wave and more Covid-19 vaccine doses are expected to arrive in the country soon. Can the global supply keep up with demand? And what does this mean for the race between vaccines and variants? It’s questions such as these that journalists must help to shed light on.

Global health experts have warned that as long as the SARS-CoV-2 virus continues to spread unchecked, it will continue to mutate and produce variants. It’s been described as a race between variants and vaccines. What would it take for the vaccine to win the race?

According to Prof Salim Abdool Karim, the former chair of the Ministerial Advisory Committee on Covid-19, this was among the unanswered questions and untold vaccine stories that journalists should pursue.

Karim was speaking at the launch of “Let’s Talk Vaccines”, an e-learning course to guide quality vaccine journalism produced by the global media development organisation Internews to help journalists construct story angles such as these.

Karim voiced concern that vaccines could not be produced fast enough to meet global demand, which puts the global community on the back foot even as science is rapidly producing solutions.

This was aside from procurement and rollout delays over which others have voiced concerns, such as President Cyril Ramaphosa, who spoke about challenges with the delay in the regulatory release of doses of the Johnson & Johnson vaccine in his address to the nation on 30 May 2021.

South Africa had been hoping to start using the J&J vaccine in the general rollout by now, but there is a global pause on the release of the vaccine because of contamination at a manufacturing plant in the US.

In April, the European Union launched legal action against the vaccine manufacturer AstraZeneca over delays. In March, the Covax facility announced delays in doses from the Serum Institute of India, due to the increase in demand in that country.

Karim, who was recently appointed to the World Health Organization (WHO) Science Council, is also concerned about the virus evolving.

“I think we can reasonably expect that we will see several new variants. And as populations get vaccinated, the presence of vaccine antibodies in individuals who are immune-compromised may lead us down a path where we may start seeing variants that can escape vaccine immunity,” he said.

“And when I do have sleepless moments, they revolve around a critical question in vaccines that we don’t yet have a clear answer to: To what extent are vaccines effective in preventing onward transmission?”

Bruce Aylward, also a senior adviser at the WHO who works on Covax, told Vox news website on 20 May 2021: “People keep asking me, ‘What keeps you awake at night? The variants?’ Christ, no! It’s human behaviour — the unwillingness to share! How do other people sleep at night? They should be so energised to fix this!”

For journalists globally, an already complex virus story has shifted to a vaccine story with many facets. They are following phenomenally fast vaccine development and cutting through a slew of news releases from pharmaceutical giants. The story is also about equity, accountability and understanding international trade and intellectual property rights issues.

Journalists must also navigate misinformation and address the public’s fears.

The unanswered questions in science and the human rights and equity concerns are just two of the facets of the vaccine story which keep high-level scientists awake.

“And then we have a problem that’s in the waiting, which is vaccine hesitancy,” Karim told journalists.

The rise in new cases in South Africa and other parts of the world brings the urgency of vaccinating citizens into stark focus. It is urgent because more vaccinations mean fewer people with severe disease. It is urgent because it is the uncontrolled spread of SARS-CoV-2 that leads to mutation — which means more variants.

Journalists need to be on that story and turn their understanding of the urgency into advocacy for faster rollout and a more equitable global sharing of vaccines.

The urgency can translate into stories that encourage individuals to go and get vaccinated. It is ironic that vaccine queues themselves can be spreader events, and Karim asked journalists to remind the public to stay safe at vaccination sites.

It is to help journalists plot out all these story angles that Internews, which provides health journalism training, has produced “Let’s Talk Vaccines” as a free e-learning course for self-study, with mentors on call.

Adele Baleta, veteran science journalist and pandemic media mentor at Internews, is a course author dealing with the flood of interest from journalists enrolled in the course.

“From the interactions or feedback in the chatbox, course participants are clearly eager to learn more about the science that underpins vaccines in general and the pandemic in particular,” she said.

“Let’s Talk Vaccines” is a one-stop resource for journalists to consult for all things vaccine-related. It also contains a section that urges them to take lessons from the global response to Covid-19 to look ahead to the next pathogen.

As Karim said: “I learnt about how important it is to draw on the experiences and what we’ve learnt over this past year and a bit, so that we are better prepared for the next pandemic.”

He is now closely involved in the creation of an epidemic response unit to build local capacity for diagnostics and vaccines. A high-level Africa-France dialogue was held on 28 May 2021 to further accelerate efforts to establish and strengthen the continent’s vaccine manufacturing capacity, a long-term investment in self-reliance and pandemic preparedness.

What is the next generation Covid-19 vaccine science that journalists should know about?

Karim said the endgame might be an entirely new technology that would enable us to get rid of this disease, but that was probably a long way off.

More likely and more imminent, he said, was a next-generation vaccine that achieved broadly neutralising antibodies — in other words, a way of neutralising many different genetic variants of the virus.

“It has to be something that gives the virus very little room to manoeuvre.” DM/MC

Ida Jooste is a South African journalist and the global health media adviser at Internews.