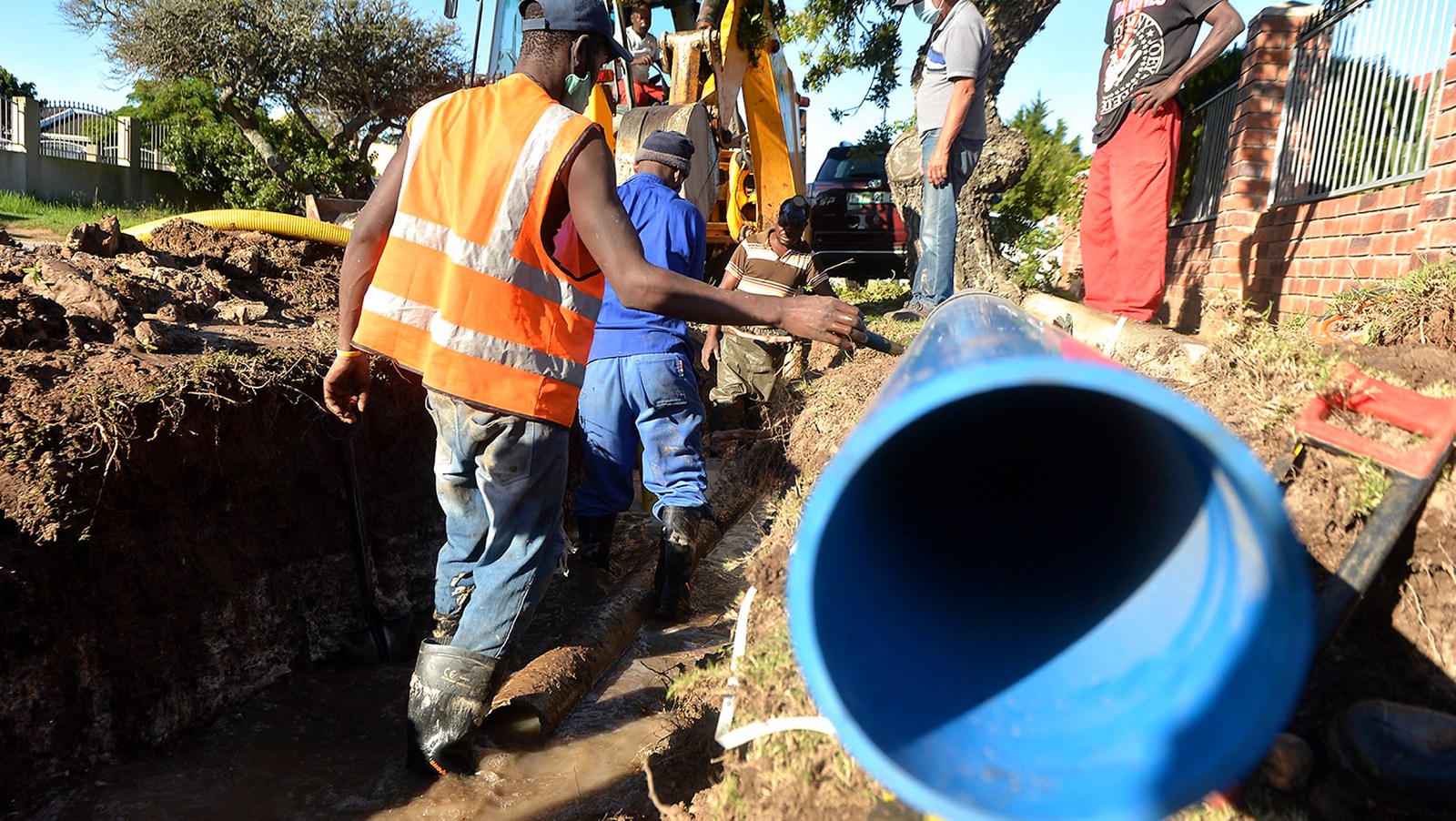 Large parts of Nelson Mandela Bay have been without water for the past two days. (Photo: Deon Ferreira)

Large parts of Nelson Mandela Bay were left without water for two consecutive days as teams of plumbers scrambled to fix a major supply pipe. This comes after the Nelson Mandela Bay metro and the Sarah Baartman district were turned down by the national government when they asked for disaster funding.

As large parts of Nelson Mandela Bay, the Eastern Cape’s biggest metro, were left without water due to “urgent repairs” on a bulk pipeline, officials from the municipality were in a race against time to convince the national government to have the district declared a drought disaster zone.

The applications by the Nelson Mandela Bay metro and the Sarah Baartman district, both in the grips of a serious drought, were turned down by the national government at the end of April.

Officials have indicated that the disaster declaration is needed to obtain additional funding, reprioritise the budget and carry out emergency procurement.

Mamnkeli Ngam, the provincial spokesperson for Cooperative Governance and Traditional Affairs (Cogta), which is handling the drought crisis, said this week the provincial department did not know why the application to have the two districts declared drought disaster areas was refused. He said the national department ought to know. But the national Cogta spokesperson, Lungi Mtshali, did not respond to questions sent to him.

It is understood though that during a meeting on 29 April, officials from the Nelson Mandela Bay metro and the Sarah Baartman district presented their applications to the National Disaster Management Committee.

Several issues were raised, including the existence of emergency procurement policies, ways to use legislation to reprioritise items in the budget, the existence of by-laws to enhance drought restrictions and also what other plans had been made.

The Nelson Mandela Bay metro, which has been politically unstable for years, has lost close to R300-million in unspent drought funding after the previous city government failed to spend it. National Treasury has refused an application for the roll-over of the funding, but it is understood that the national government has indicated a willingness to reconsider the application for a drought disaster zone declaration.

Last week Mayor Nqaba Bhanga said that the metro was “fast heading towards a dry July and the water consumption for the district has not come down. This is despite the various interventions we have launched to reduce water losses, augment water supply and reduce consumption.”

The metro has only 11.9% of surface water left in its storage dams.

The metro is not facing a Day Zero in the strict sense, as it receives just under 50% of its water from the Nooitgedacht water scheme, which brings water from the Orange River. But not all the metro’s suburbs and industrial areas are connected to this scheme.

Bhanga said construction had commenced on a pipeline that will direct water to KwaNobuhle from the water scheme. KwaNobuhle is a large township outside of Kariega (formerly Uitenhage) that receives its water solely from the Kouga Dam. It is predicted to be one of the first areas in the metro that will run dry by July. The Kouga Dam, the metro’s largest storage dam, is only 4% full.

Ratepayers will also be paying more for water after Tariff C prices have been introduced.

“Both National Treasury and the national Department of Water and Sanitation have repeatedly indicated their concern that these tariffs were not already implemented. The municipal budget, which will soon be tabled, must speak to the severe drought we are experiencing and must direct resources towards tackling the crisis. We cannot table a budget that does not talk to the most significant risk Nelson Mandela Bay metro is currently facing,” Bhanga said.

“I will be writing to the president, minister of Cogta and the premier to query the decision to turn down our drought disaster declaration, as we believe that this declaration will unlock some of the logistical challenges currently experienced,” he added.

On Thursday Bhanga announced that the man who was acting mayor of the metro when crucial drought funding had to be returned, Thsonono Buyeye from the African Independent Congress, will take over the portfolio that will deal with water management.

The Democratic Alliance’s Masixole Zinto, who served as the mayoral committee member for infrastructure and engineering, was assigned to human settlements.

“This decision is driven by the strategic importance of this directorate, especially as we are in the grips of a severe drought and face the devastating prospects of a dry July.”

A new deputy mayor will be elected at a council meeting next week.

Water to the western part of the metro was shut down on Tuesday so that urgent repairs could be carried out on a major pipeline.

“The City wishes to inform residents that a bulk water pipeline needs to be shut down to execute critical maintenance. This will disrupt the east-to-west transfer of water and will cause reservoirs to lose storage.

“The shutdown will commence early morning on Tuesday, 1st June 2021. It is envisaged that supply will be restored by Tuesday evening. There is a chance that storage could be depleted before supply is returned.”

But by Wednesday morning the municipality said the repairs had not been completed.

“The critical planned maintenance that is aiding in the reduction of water wastage has taken longer than expected,” a statement by the municipality read.

“The bulk pipeline repairs have not yet been completed due to unforeseen circumstances. Water and sanitation subdirectorate teams are still performing critical maintenance and will continue to do so until midnight. The water supply is expected to be restored in the early hours of tomorrow.”

On Thursday water tankers had to be dispatched to several locations, including a clinic and a police station.

Meanwhile, Garth Sampson from the South African Weather Service said that regular rainfall in the catchment area had “bought a week” of extra time before dams run dry. He said there were signs of promising winter rainfall for the area. DM/MC