My Final Answer: Veteran journalist Jeremy Maggs bares all in his latest book 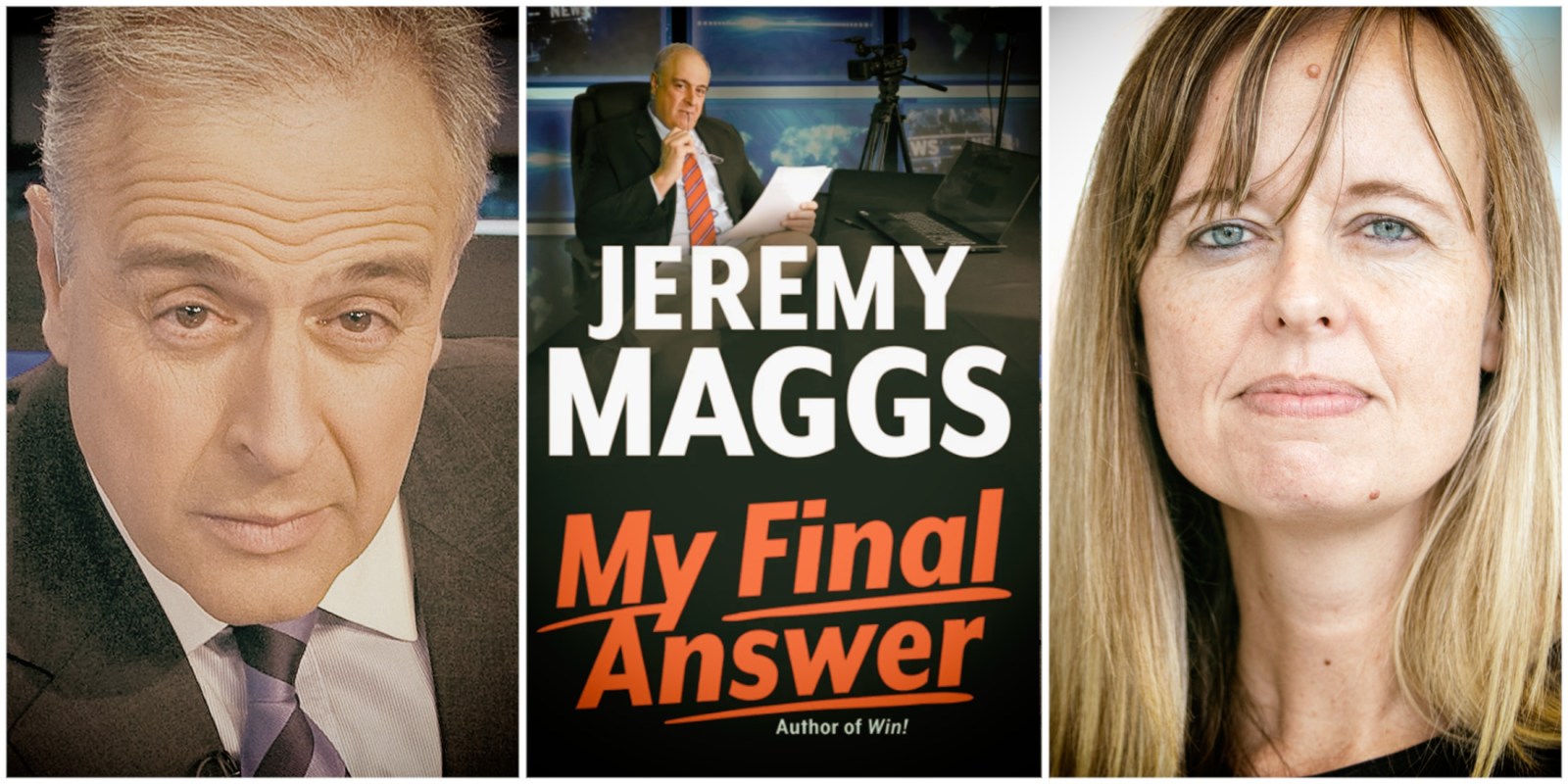 Jeremy Maggs is a veteran journalist and television and radio presenter, known for hosting the South African version of Who Wants to Be a Millionaire? and for his anchoring roles on eNCA and his own show Maggs on Media. In his hilarious and compelling new memoir, My Final Answer, he shares snippets from his extraordinary life in South African newsrooms.

With more than 30 years’ experience in print journalism, television and radio, Jeremy Maggs has had a truly spectacular career in South African media.

His new book, My Final Answer, was published in May 2021, and the title is a clear nod to the catchphrase “That’s my final answer” from the hugely successful television show Who Wants to Be a Millionaire? – which Maggs hosted on local television from 1999 to 2005.

On Wednesday, he chatted about his memoir in a Daily Maverick webinar hosted by journalist Rebecca Davis, and shared some anecdotes about his front-row seat to some of South Africa’s biggest news events.

Written in a self-deprecating style, My Final Answer is incredibly candid and witty, commented Davis.

“If you don’t enjoy it, you are dead inside,” said Davis, who referred to one extract in particular that had her heaving with laughter.

Maggs writes: “There are two types of make-up artists: those who believe all one needs is a light dusting of powder to hide any shine. I work well with these individuals and they inevitably end up getting a small Christmas present. Then there are those who have a secret desire to be on a pioneering reconstructive surgery team and end up turning you into a drag queen. I struggle to work with this group and they normally get a perfunctory nod and a hard stare come Yuletide.”

Despite the titular reference to the game show Who Wants to Be a Millionaire?, Maggs spends relatively little time discussing the show in his book and instead writes about the many other moments that have shaped his life and career.

Born in 1961, Maggs described his upbringing during apartheid as a “privileged, white, middle-class, suburban existence in northern Johannesburg”.

“My father always used to bring The Star home. It was a very sanitised version of what was happening in South Africa at the time,” he recalled.

From a young age Maggs was drawn to radio and listened to Springbok Radio religiously. After 30 years of working in different media, radio will always be his favourite medium.

“It will always be radio,” he said. “There’s an intimacy; there’s a magic about radio.”

Like many in the media, Maggs fell into a career in journalism. He said he was “never supposed to go into journalism” because his father was set on him pursuing a career at Nedbank.

He recalls his father telling him: “‘By the time you’re 40, you can be the branch manager at Edenvale.’”

“And I am just so lucky I had a voice that enabled me to go into the media because I would’ve been terrible at banking,” he said.

He mentions a few incidents where his mathematical errors have landed him in sticky situations; one being his mistake in tallying matric results while working as a reporter for the then Eastern Province Herald.

After incorrectly calculating the results of Grey High School and Theodor Herzl on the front page of the paper, Maggs described how his editor at the time had thrown a calculator at him on his return to the newsroom the following day.

“I was then made to offer restitution and I had to answer the phone for the rest of the day to angry parents, apologising that I had got it wrong,” said Maggs.

Maggs is one for admitting his past mistakes, and throughout the book the author is “very frank and candid about the mistakes [he’s] made on air and off it”, commented Davis.

One such mistake occurred during Nelson Mandela’s memorial, where after roughly 12 hours on air, “in the final stretch of the broadcast”, Maggs referred to “Jacob Zuma’s memorial”.

“There was nothing I could do about it,” Maggs admitted. In journalism, “you’re going to make mistakes. I live with them and I just think [they] add to the scars on your back”.

In My Final Answer, Maggs describes how he never intended to go into the “quiz business at all” and considered himself to be a hardcore journalist. But he had always been a bit of a trivia buff, and was in the Eagles Quiz team in primary school and led his “team of nerds to a glorious victory” where they defeated Hawks House by a single point.

“That was the start of my career in the quiz business,” he said.

Maggs said he received a phone call from movie producer Anant Singh just as he was coming off a morning television show at the SABC, who offered him the position of host of Who Wants to Be a Millionaire?

“I remember being absolutely insulted – in fact, affronted,” said Maggs. “I said to him, ‘Anant, I’m not interested… I’m a serious journalist’.”

Singh sent him a video cassette and asked him to mull the decision over.

“Rebecca, I realised within seven seconds of looking at the British version of the show that I’d made a horrendous mistake [and] that this was something I wanted to do,” said Maggs.

He described the game show as “a great time in [his] life” and said that the secret to the show’s success lay in its “shoutability” factor – the ability for audiences at home to shout at their televisions if they knew the answer and the contestant was clueless.

“I think we need another quiz show on television,” he added.

Maggs resigned from eNCA in March 2021 after stepping down as eNCA’s acting editor-in-chief in February last year. He had been with the news broadcaster for 11 years.

“I was the opening face and voice on eNCA when it launched, [and] I was thrilled to be part of a pioneering project in South African media,” he said.

But Maggs said he had got to the point where he felt he had “overstayed [his] welcome”, and was preventing other people from pursuing an on-air career.

“It was time for me to go,” he said. “There’s no rancour, there’s no animosity… I wish the station well.”

Asked if he was done with journalism, Maggs said he was currently busy “with a new news project” but it was time for him to move on from television and radio. DM

Order your copy of Jeremy Maggs’ My Final Answer directly from the Daily Maverick Shop and receive free delivery anywhere in South Africa.