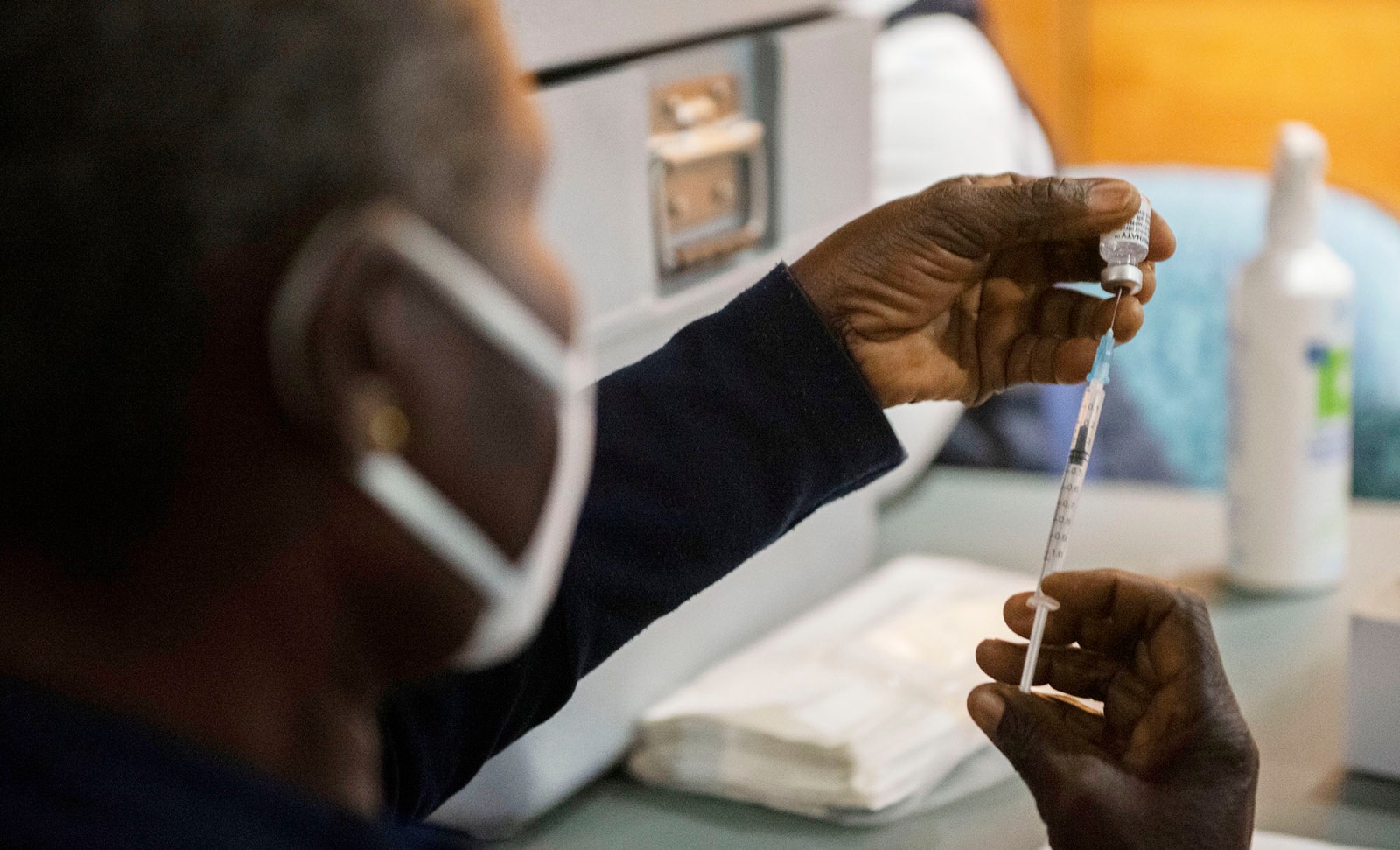 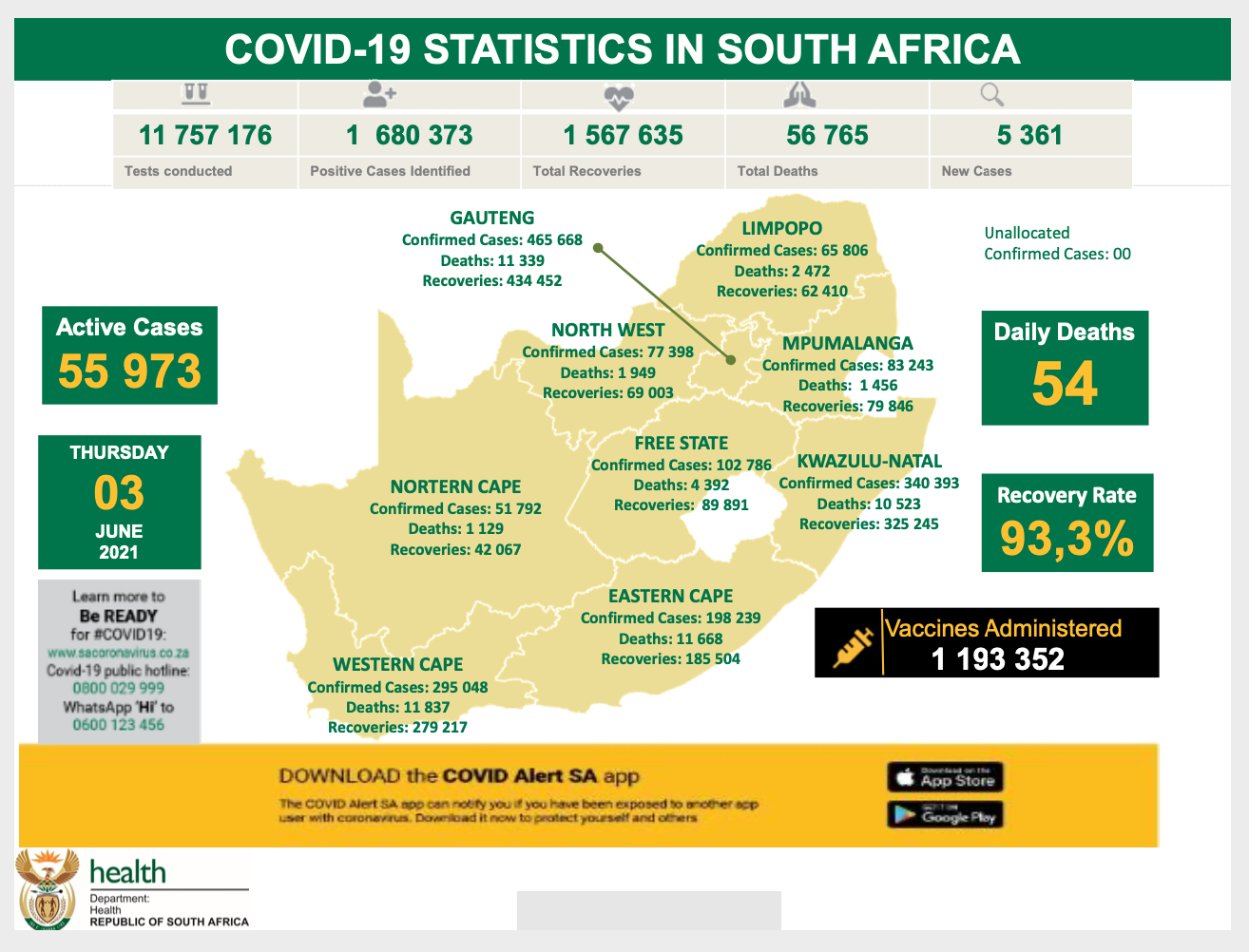 New York is seeking to boost young people’s vaccination rates, with some venues set to offer “a shot for a shot” in a city campaign to target nightlife spots. Covid-19 hospitalisations in New York State declined to less than 1,000 for the first time since October.

Global vaccinations reached 2 billion slightly more than six months into the campaign, though much remains to be done in places such as India and Africa. The White House unveiled a list of regions that will receive the first shipments of unused vaccines from the US.

US infectious disease expert Anthony Fauci said it is possible that the world won’t determine the precise origin of the virus. President Joe Biden last month ordered a new 90-day intelligence review of how the pandemic began.

The number of people hospitalised for Covid-19 in New York State fell to less than 1,000 for the first time since 21 October.

While almost 58% of adult New Yorkers have completed their vaccinations, hospitalisations declined to 970 on Wednesday, Governor Andrew Cuomo said on Twitter. That compares with a second-wave peak of 9,273 in January.

The positive-test rate declined to 0.44%, staying at a record low.

Delta variant dominant in US

The Delta variant of coronavirus that was first identified in India is now the dominant variant in the US, according to Public Health England.

Early evidence suggests there “may be an increased risk of hospitalisation” for Delta, although “more data is needed for us to have more confidence in that finding,” PHE said in an emailed statement.

US cases of the Delta variant more than doubled in the past week to 12,431.

The US removed Portugal from its so-called green list of countries that Britons can visit without having to quarantine after returning home. The setback for summer tourism sent airline shares lower.

“It feels like the summer for US airlines is fast ebbing away,” said Rob Morris, who heads consultancy at aviation tracker Ascend by Cirium.

Separately, the European Union decided to maintain restrictions on non-essential travel from the US and the UK, meaning visitors from those countries may still need to abide by quarantine requirements. Fully vaccinated visitors to the EU won’t have to quarantine as of 1 July.

Inoculations against Covid-19 reached two billion on Thursday. It took just over six months to reach the milestone, an extraordinary accomplishment precipitated by countries’ desperation to save lives and reopen their economies.

Still, it’ll take nine more months to vaccinate 75% of the global population, a threshold that could provide so-called herd immunity.

The virus has struck almost 172 million people and killed close to 3.7 million since the first cases emerged about 18 months ago.

NYC offers ‘shot for a shot’

New York City is expanding its vaccination effort to the city’s party-goers, using a vaccine bus to meet younger New Yorkers outside restaurants, clubs and other nightlife hotspots in popular neighbourhoods such as the East Village and Bushwick. The city also is starting mobile vaccination sites at schools on Friday.

Some venues will offer a “shot for a shot”, Mayor Bill de Blasio said. More than eight million shots have been delivered in the city, but the vaccine rate has dropped to about 26,000 a day from a high of more than 100,000 in April.

US infectious disease expert Anthony Fauci said it was possible the world would never find out the precise origin of the coronavirus pandemic, after President Joe Biden last month ordered a new 90-day review from the intelligence community about the possible origins of the virus.

Fauci said during an appearance on MSNBC that while he feels it is still “more likely” that the virus jumped from animals to humans, “we still don’t know what the origin is”.

Fauci said that reports that three researchers from the Wuhan Institute of Virology became sick in November 2019 gave more credence to the possibility that Covid-19 may have emerged from a “lab leak”, but said those reports still needed to be verified, while maintaining that animal to human transition happens “all the time”.

China can’t begin to ease restrictions like the US even after inoculating a high level of its population because it has no way of analysing how well its vaccines have worked in its largely Covid-free population, according to a top health official.

Despite vaccinating more than 40% of its citizens with at least one dose, Feng Zijian, the deputy director-general of China’s Center for Disease Control and Prevention, said China “has some unique difficulties” and is unable to match the US’s ability to examine vaccine effectiveness in real time as cases and deaths ebb.

Hungary in talks on Sputnik production

Hungary has started talks with Russia about the production of the Sputnik V coronavirus vaccine, according to Foreign Minister Peter Szijjarto.

Hungary is looking to manufacture the Russian shot at a new factory from the end of 2022, Szijjarto said in a Facebook video from the St Petersburg International Economic Forum. Szijjarto held talks last week in China about producing the Sinopharm vaccine as well.

A parliamentary committee rebuked the Swedish government for mistakes in handling the Covid-19 pandemic in a fresh blow to the minority Cabinet whose initial hands-off approach earned domestic and international criticism.

The government acted too slowly to ramp up testing and didn’t do enough to protect the elderly and to safeguard access to protective equipment during the crisis, which has claimed the lives of more than 14,000 people in the country of 10 million, Parliament’s constitutional watchdog said on Thursday.

The European Union will encourage World Trade Organization members to phase out export restrictions for vaccines, but will stop short of supporting an American-backed proposal to suspend intellectual property rights meant to boost the supply of Covid shots.

The EU will propose to the WTO at a June 8-9 meeting that all 164 members decrease restrictive measures related to health products, expand the production of vaccine facilities and support an easing of regulatory hurdles, according to a draft proposal seen by Bloomberg.

Japan plans to send some of its Covid-19 vaccine to Taiwan later this month, which has been struggling to procure its own supplies and blamed China for impeding shipments of the shots.

Foreign Minister Toshimitsu Motegi told parliament on Thursday that Taiwan had an urgent need for supplies of the vaccine until July, when its domestic production would be ramped up. The shortage amid rising case numbers in Taiwan has raised fears of a health crisis that could hurt its semiconductor production, which is crucial for global industry.

Singapore says it has preliminarily confirmed 35 new local cases of Covid-19 infection, the highest since mid-May. Twenty-two cases were disclosed by the government late yesterday as connected to a cluster at the [email protected] adult disability home. Of the remaining 13 local infections, 11 were linked to prior cases and two were not linked.

In another Hong Kong push to improve the city’s vaccination rate, Cathay Pacific Airways is conducting a lucky draw in which the winner can host a private party on an Airbus A321neo flight around Hong Kong. The winner and companions must be fully vaccinated, said the airline, which is also giving away 20 million reward miles to vaccinated residents.

Cathay is providing two days’ leave to Hong Kong-based ground staff who are fully vaccinated. More than 80% of Cathay pilots and about 50% of cabin crew have booked or received vaccinations, the carrier said Thursday. DM