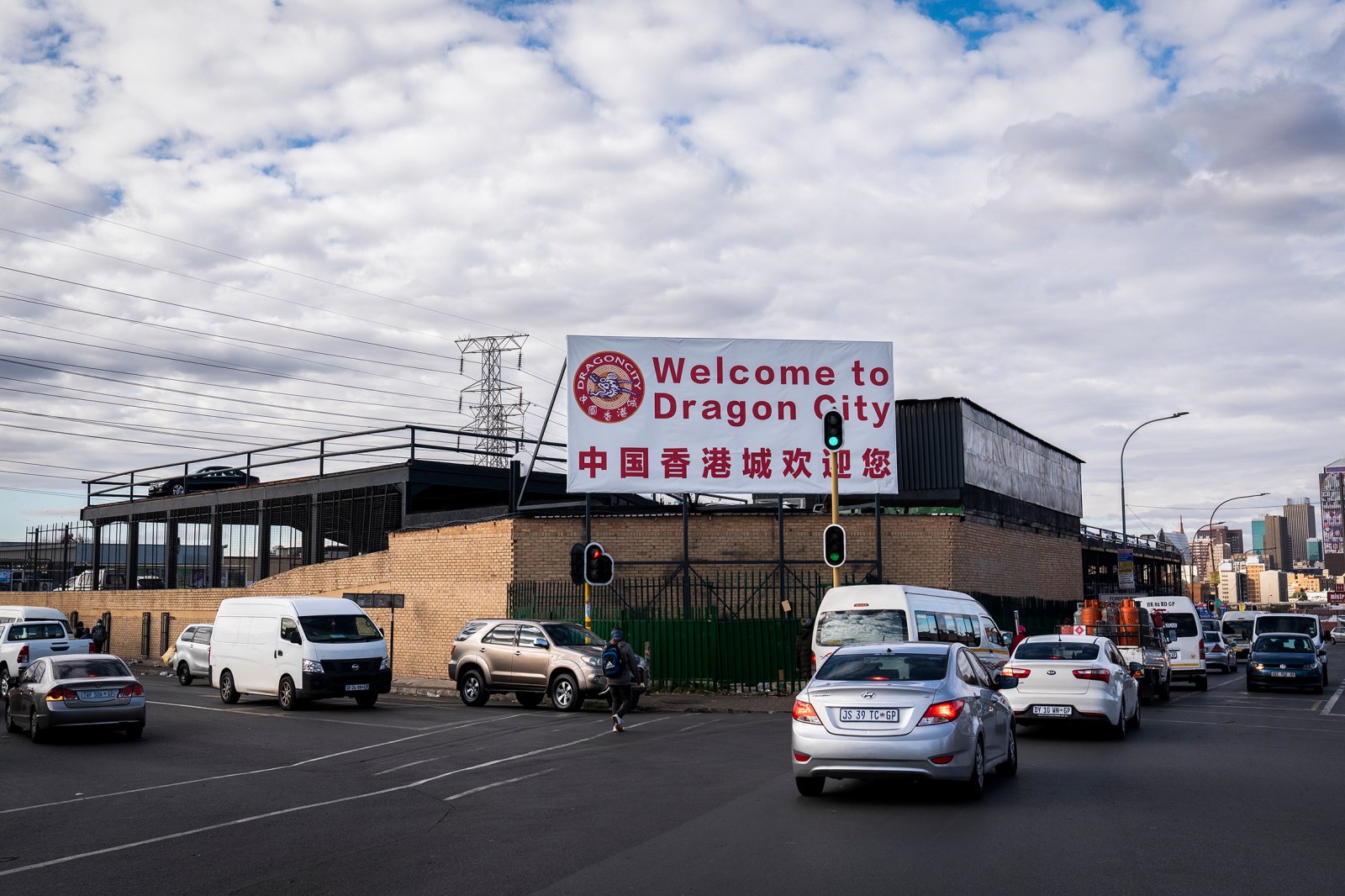 A signboard welcoming shoppers to Dragon City which bills itself the ‘Sandton City’ of China Malls. (Photo: Shiraaz Mohamed)

Residents have won an application for the return of a green lung to their community — but the public space is now occupied by the sprawling Dragon City, which labels itself the ‘Sandton City’ of China Malls.

Johannesburg is a city of shoppers and malls, and increasingly of China Malls. People from across the country and the continent shop in Johannesburg. Most regional tourism to South Africa is from hawkers and shop-owners who buy from the China Malls.

The malls, owned by a new generation of Chinese business people who have immigrated, now dominate most retail nodes. The biggest is on Main Reef Road, Crown Mines, in the south of Johannesburg, which has become like a little Shanghai. Every day the China Malls are packed with people shopping for hair, clothing, bedding, wedding and other event paraphernalia, and everything a woman or man could need.

But in May, Judge Leicester Adams in the Gauteng High Court handed down a scathing judgment saying that one of the malls had illegally encroached on public land.

He instructed the City of Johannesburg to stop the land grab by Dragon City, one of the busiest malls, which styles itself as the Sandton City of China Malls and as an upmarket destination on the south-western fringe of Johannesburg. The residents of Crown Gardens township and Mayfair don’t agree. They asked the court to order that the City of Johannesburg abide by its own town planning laws and to end the land grab by Dragon City, which has incrementally and illegally expanded its space beyond its lease conditions. It took over one of the few green lungs of open space in the community.

The residents also said they had been harassed by the owners of Dragon City, that their adjacent properties had been damaged and that the constant construction created noise pollution.

Judge Adams ordered the city to enforce its Land Use Scheme of 2018 to ensure the erf “complies with the law and that it is only used for the purpose for which it has been zoned, that being a ‘public open space’ ”. The case was won by Webber Wentzel for the Mayfair Residents Association and it has implications for the city, which increasingly allows business rentals of public spaces in the working-class parts of the city.

In the nearby historical area of Fietas (Pageview), a taxi sales business has taken over a football field used by the area’s children. What used to be schools now house a bus company and other businesses.

Chung-Fung and Anchor Projects, the companies that own Dragon City, were ordered to pay the residents’ costs and were interdicted from any further construction on the site and from harassing the residents who had brought the action against them.

China Malls are often owned as sectional titles and the title-holder shopowners live on the premises. The judge ordered that the owners of Dragon City cannot allow persons to sleep over on the property. Dragon City built its multiplex and sprawling mall on a space zoned as a public open space by the city.

“It used to be a vacant lot, described by the applicants as a ‘green belt’ — a park visited and frequented by the residents from the surrounding areas. It was a green lung which lay nestled between the residential areas to the north and the industrial and commercial districts to the south.

“That was many years ago and only until about 2005 when [Dragon City] gradually started taking over occupation of the property by using space as overflow parking [and also] erected structures of a temporary nature, in which certain of its employees were allowed to live,” the judgment reads.

The city is the owner of the land and it must ensure that the land usage complies with the law, the judge said. The judgment says the City of Johannesburg is obliged by the Constitution to ensure a safe and healthy environment and to encourage the involvement of communities and community organisations in matters of local government.

The owners of Dragon City argued that the City of Johannesburg’s lease with them (now expired) superseded the land zoning, but the judge disagreed.

“It was never open to the City to consent to the land being used as a parking lot or to house shipping containers or to operate retail shops — it could only be used as a ‘public open space’ which includes it being utilised as a park, playground, public square, picnic area, public garden, nature reserve, indoor or outdoor sports stadium,” reads the judgment.

The City of Johannesburg did not oppose the application. Dragon City is appealing against the judgment.

The retail dominance of China Malls is in conflict with national and city policies. The government is pushing for localisation and for buying local, although most South African manufacturers cannot compete with the prices of the China Malls.

Densification policies mean that city land must be better used, but for housing, not for malls. DM