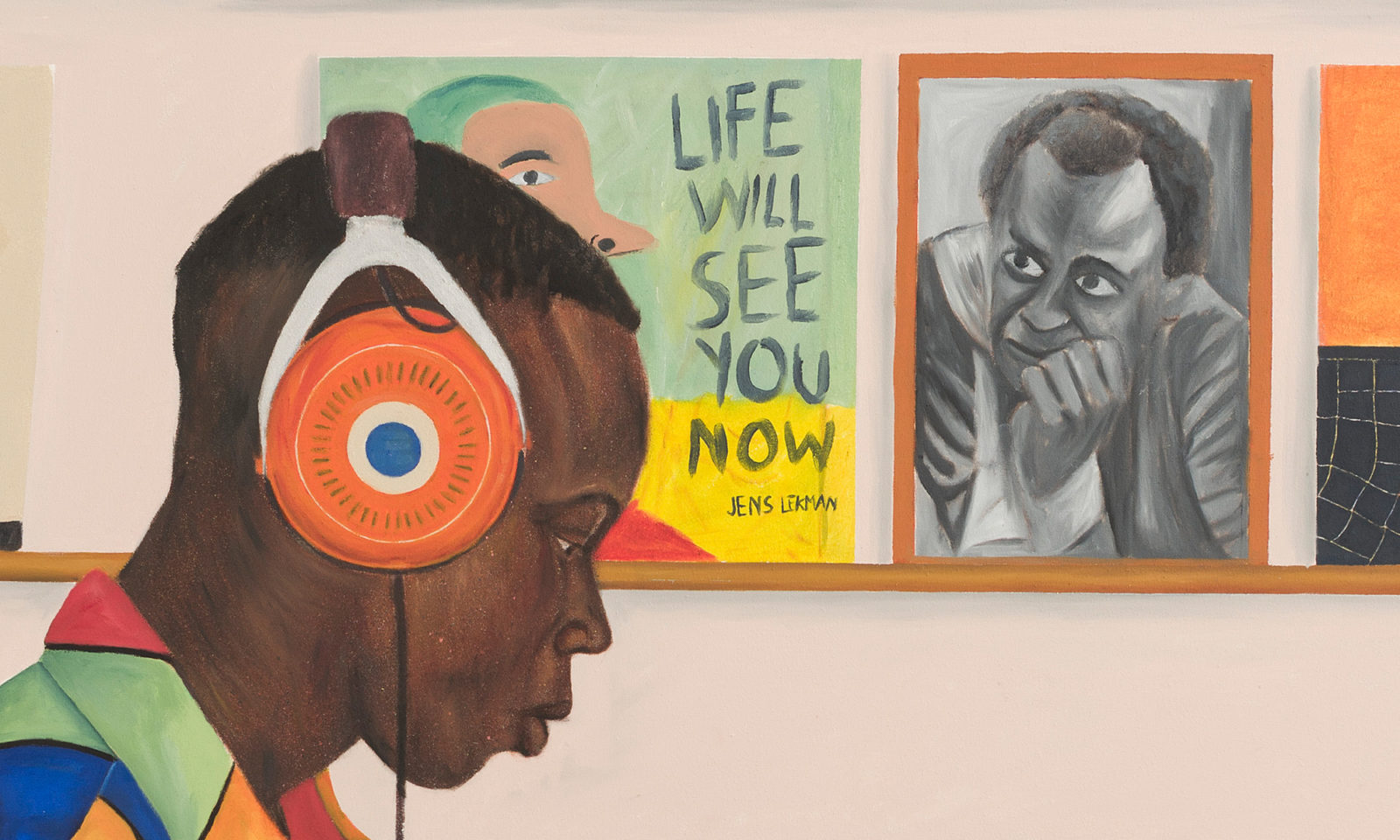 Aviwe Plaatjie’s first solo exhibition at Ebony/Curated is a hit despite the mundanity it presents.

Aviwe Plaatjie could not have arrived at a better time on our art scene with his exhibition Makwande.

Shifts in the art market and society have primed us in a way to receive his art with open arms. It is not simply that what is being referred to as black portraiture is selling well on auctions in the US and in other art capitals, there has been somewhat of a flood of this genre at galleries and virtual art fairs. Everyone is on the lookout for the next Amoako Boafo, the Ghanaian artist whose works have fetched as much as R17-million. But there are also other reasons for this flurry of portraits – #blacklivesmatter has compelled artists to represent black identities and celebrate blackness.

The degree to which Plaatjie’s figurative work ties in with these shifts might be what is making us take notice of his art, but, interestingly, what is most satisfying about it is also the manner in which it doesn’t conform to these art “trends”. This may explain why his debut show at Ebony/Curated in Cape Town has been a sell-out.

It is not just that this self-taught, Cape Town-based artist is making art that speaks to our times; his paintings are well executed and exude a kind of intimacy and ordinariness that is compelling.

Largely, the kind of portraiture that is dominating presents subjects engaging the gaze of the viewer and evince an awareness of it. Plaatjie’s subjects, however, seem unaware of viewers; their gaze is directed elsewhere. This device along with the settings – largely domestic – and their poses – lying, reading, sleeping or listening to music – engenders that they are inhabiting an intimate space to which the public isn’t privy. Put more simply, his portraits are of people relaxing at home.

This probably squares with the fact that Covid-19 and the lockdowns it has caused have seen most of us chained to our couches. In this way the exhibition charts life in lockdown. Belying these ordinary domestic scenes depicting a man relaxing at home is a darker reality.

Lie down on the Floor and Keep Calm perhaps draws attention to the fact that moments of panic and anxiety do plague Plaatjie’s subject(s) though what brings them about is unknown – as the conditions presumably exist beyond the confines of this man’s home. This, of course, has been the bizarre contradiction of life in lockdown – confined to your home, everything appears the same, normal even.

Ordinariness, capturing normality is the underlying motif defining Plaatjie’s portraits. His subjects are engaged in regular activities – reading a book, lying on the couch, listening to music, having a snooze, smoking a cigarette or just staring ahead while preoccupied with other thoughts. As such these are not posed portraits designed to exude a particular statement about the sitter. The opposite is the case; Plaatjie seems keen to depict people who are unaware of an audience and who are not performing for one.

This is what sets his art apart from the majority of portraits that are currently circulating, which seem to be so marked by a public performance of an identity and/or a reduction of a racial identity to literal flat colours. It is possible that Plaatjie’s portraiture is not intended to be in “opposition” to anything. You sense he is rather interested in cutting to what is real, authentic.

Hence his interest in representing banal activities and scenes. His art appears to be about nothing – that is, after all, what a lived experience can be – just existing. The world and its social and political ills are at a remove, yet his subjects are not luxuriating in some kind of utopian domestic idyll. Nor does Plaatjie offer us an unmitigated raw reality. He seems to strike a balance in a way between painterly flourishes and authentic lived experience.

The contexts are detailed but not hyperreal. You can detect the grain of the wood on floorboards underneath the subject’s body in Lie down on the Floor and Keep Calm. In other paintings he tightly renders the patterns of the subject’s clothing or other decorative details in the room they occupy. This may be a painterly indulgence, a nod even to the fixation with patterns in the portraiture of the likes of Kehinde Wilde or Eddy Kamuanga Ilunga.

The work Music, which depicts a subject studying a record cover in a room adorned with artworks and other record covers, offers the most detailed background and context and also, as a result, communicates something particular about him – his passion for music. But largely in this exhibition, the paintings are more to do with describing down-time than dealing with obvious signifiers of identity.

This is what is so refreshing about Plaatjie’s works – they make for easy and pleasurable viewing without delivering escapism. Save his interest in capturing the banalities of domestic life, he opts for a very vibrant palette. Primary colours pop on his canvases and combine in the detailed patterned fabrics he renders so neatly.

The scale of his paintings further advances the sense of intimacy they exude. You can take in all the details without having to squint, and the scale affords detail.

Ultimately, this is a remarkable solo exhibition, especially given that it’s Plaatjie’s first – the works feel polished and considered and hang comfortably together. This painter is not charging off in five directions to find his groove. He has found it and now audiences have found him. DM/ML

Makwande shows at Ebony/Curated in Cape Town until 25 June 2021.