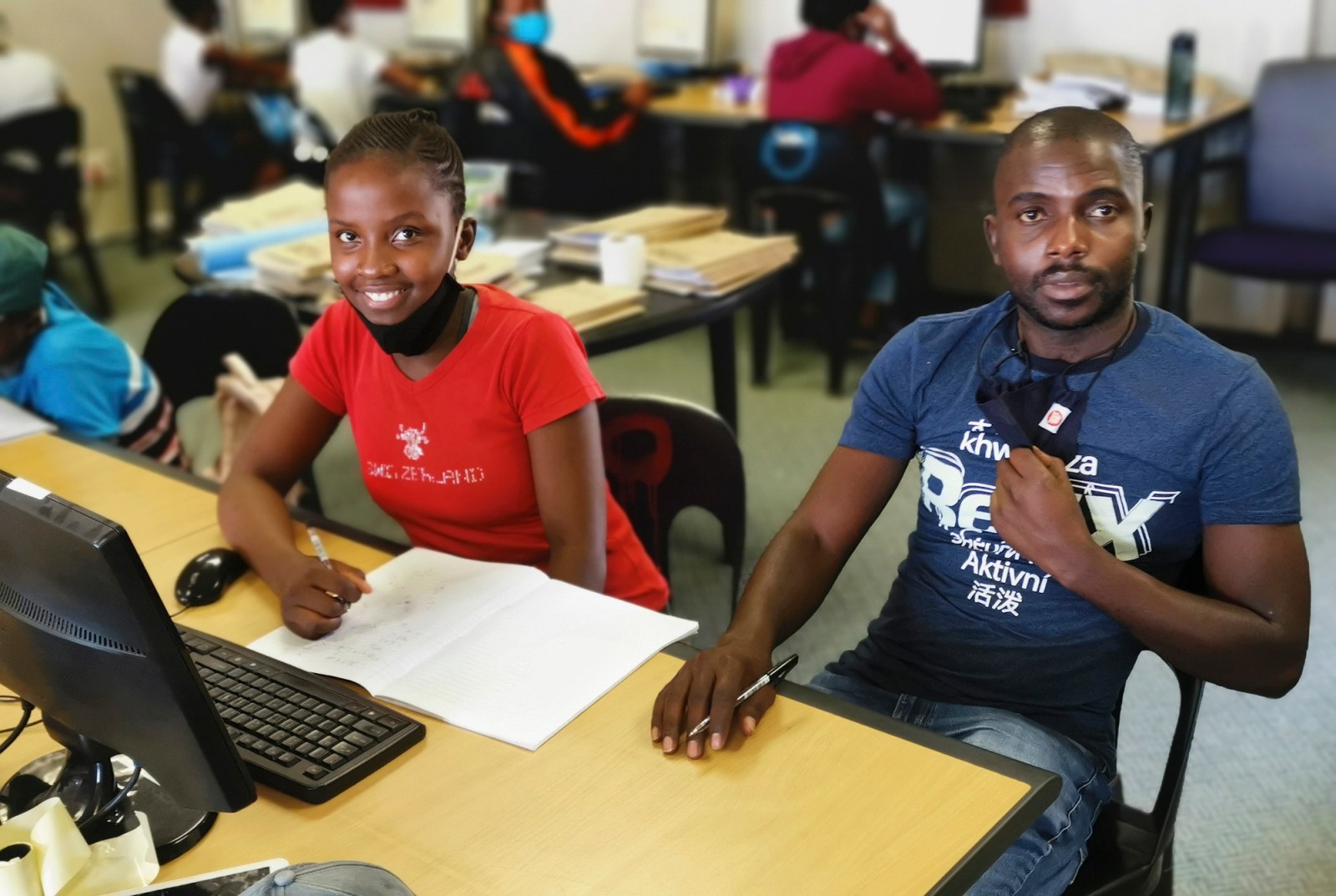 Refiloe Onnica Boshielo (left), who is in Grade 7, with Olico tutor Shelton Chadya at the Diepsloot maths centre. (Photo: Olico)

An innovative maths WhatsApp hotline threw high school teens an educational lifeline during 2020 when the Covid-19 pandemic ensured that old ways of reaching learners wouldn’t work any more. The hotline is still playing a crucial role in 2021.

Diepsloot resident and Grade 7 learner Refiloe Onnica Boshielo was stuck in Mogodi village in Ga-Mphahlele in Limpopo when South Africa was locked down during the 2020 pandemic. “I was at my village home for the Easter holidays when we were locked down, so I couldn’t come back to Diepsloot in Johannesburg,” she said.

Boshielo was lucky. She had received face-to-face mathematics support after school with an NGO called Olico. So when Diepsloot co-ordinator Shelton Chadya made contact, Boshielo immediately signed up for a remote maths WhatsApp group.

“I was staying with my cousins and aunt, and my aunt made sure I had airtime. Shelton used to send worksheets on WhatsApp in the morning. By 12pm everybody had to complete the work. We’d WhatsApp him questions between 9am and 12pm, and then do the work. By 4pm, he’d send corrections. Then we’d discuss before he sent answers.”

Olico has provided maths after-school support to South African learners for 11 years by signing up individuals or sending tutors to high schools. Its main centre is in Diepsloot.

When lockdown closed schools during 2020, Olico’s staff were challenged by how to contact learners who were keen to carry on. The core solution was the maths WhatsApp groups connecting high school teens to a tutor remotely. They had instant buy-in.

Some months later, when it became clear that schools wouldn’t function as before, Olico formalised the system by launching a maths WhatsApp hotline. Grade 7 to 9 learners received daily maths reminders and encouragement, with access to their group tutor at set times. Any high school learner across South Africa can access the hotline free if they WhatsApp “Hi” to 073 923 9021.

But for many families in lower-income groups, this brought challenges. Teens had to borrow their parents’ phones to get maths assistance. For some, R30 for data was too much.

This is why early on during lockdown, Olico had its online maths programme (learn.olico.org) zero-rated by cellphone providers, for use without data. The team also crowdfunded to sponsor R30 of WhatsApp data to keep a child learning for a month.

For some learners, they bought basic smartphones. The crowdfunding raised almost R100,000.

Olico’s Chadya explained that just powering a mobile phone or having light for studying was problematic during 2020. Electricity outages in Diepsloot were common. In 2021, not much has changed. During one follow-up call after Easter, Chadya told me his part of Diepsloot had been without power for a week. In May, load shedding continues. Olico’s generator worked overtime in 2020, and still powers lights and charges phones during 2021.

Physical distancing meant schools staggered learner attendance to a few days a month last year, and are also doing so during 2021. Olico’s popular maths centre is open weekdays, providing tutoring and computers. “They’re often coming here to do other homework too, as they don’t always have space at home,” explained Chadya. He’s worked there since 2015.

When Boshielo returned to Diepsloot for school last June, a malfunctioning phone made it tricky to stay connected with her maths group tutorials. “The education from school wasn’t enough. It was Grade 7 and we were going in only one day a week,” she explained. Boshielo was given a new cellphone, thanks to Olico’s crowdfunding. She also has a powerbank to extend battery life.

It paid off, with Boshielo scoring 94% for maths in term four of Grade 7. She’s had Olico tutoring since Grade 6. “It makes a difference ’cos in my school maths class I’m always kind of ahead of other learners my age,” she said, adding, “My teachers didn’t expect those kinds of results from us last year ’cos at school we didn’t learn everything.”

This year, in Grade 8, Boshielo attends high school about 10 days a month. Face-to-face maths continues at Olico’s centre on other mornings. The bright student wants to become a businesswoman or accountant.

“Maths is very important to me – it’s part of my dream as a career. I’d like to work with numbers,” she said.

Olico provides maths support to children from foundation phase to Grade 12, but younger learners concentrate on using maths games. “Our priority focus is Grades 7 to 9, as we’re very clear that establishing a strong understanding of algebra and geometry fundamentals in early high school is core for later grades,” said Bowie.

As a visiting research associate at Wits University, Bowie is in the process of formally measuring Grade 8 and 9 maths learner outcomes, in her research on what an adapted curriculum for high school maths should consider. She has a PhD in maths education. “What we’re seeing is increasingly kids are not choosing maths as a subject from Grade 10. If you’re only intervening at that point it’s a problem, as you’ve already lost a lot of kids to the system.”

Bowie warmed to her theme. “Nic Spaull [an education researcher] says most kids doing maths in South Africa are three to four years behind by Grade 9. I would say they’re probably four or five years behind where they should be, and often lack basic arithmetic skills.

“South Africa’s high school education focus seems to be so much on Grade 10s, 11s and 12s. At many schools, our Grade 8s and 9s were often only at school one or two days a week during 2020. For a lot of our learners in lower grades, that was devastating. Even if you’re the most brilliant teacher, what can you do for those kids?”

That’s not to diminish the accomplishments of matric learners at Olico’s Diepsloot centre. The 2020 group achieved a 100% pass rate for maths, with a quarter of them scoring As. These learners started Olico maths in Grade 7, 8 or 9, and relied heavily on WhatsApp remote learning last year. “They all had to work in incredibly trying circumstances, often with no electricity,” recalled Bowie. “I had tears of joy. They pulled it out the bag, with an overall maths average of 65%.”

Mukhethwa Mashau signed up for maths at Olico’s Diepsloot centre in Grade 5. Now in Grade 9, Mashau endured trying conditions while living in Diepsloot during the 2020 lockdown. She still does.

“Last year, I stayed with my mother in Diepsloot and used her phone for maths. This year, my younger sister and I are staying in Diepsloot with my aunt and uncle and cousins,” she explained in April, via her uncle’s phone. Seven of them, plus a newborn baby, were sharing a single room. As the sole breadwinner, Mashau’s uncle works part-time.

“During the 2020 pandemic, Shelton sent data to my mother’s phone. We charged the phones at the generator at the butchery,” said Mashau. We spoke during an electricity outage, as her aunt cooked dinner by candlelight.

Post-lockdown in 2020, Mashau attended Grade 8 classes for a week, then waited two weeks to return. In Grade 9, Mashau’s Diepsloot high school offers class only once or twice a week, so Olico centre tutoring fills gaps on other weekday mornings.

“We didn’t have a chance to study a lot last year. I got 50% for maths [in] term three. In term four maths, I scored 75%,” she said. Mashau’s dream is to become a heart surgeon.

In May 2021, there was another maths setback. Mashau and her sister moved back in with their mother, Matodzi Munyai, in Vosloorus, 70km from Diepsloot. Munyai lost her catering and events business during the pandemic, and finds it a weekly struggle to fund R100 for a return taxi to send her daughters to school in Diepsloot.

So Mashau’s Olico maths lessons have shifted online, and she uses Munyai’s phone in Vosloorus. Mashau finds remote learning less comprehensive, and she misses solving problems with Diepsloot Olico classmates. “Not having extra maths is making me feel sad,” she said. “I only go to the Diepsloot centre when my mum has extra money for the taxi.”

I asked Mashau what maths means to her. “At times during lockdown, we didn’t have food. There was no electricity, so we used candles. I tried to study at night anyway.” She paused. “Whenever I do maths, I forget about every situation at home.” DM168

Make a small difference and contribute towards smartphones or data. Contact Olico via olico.org