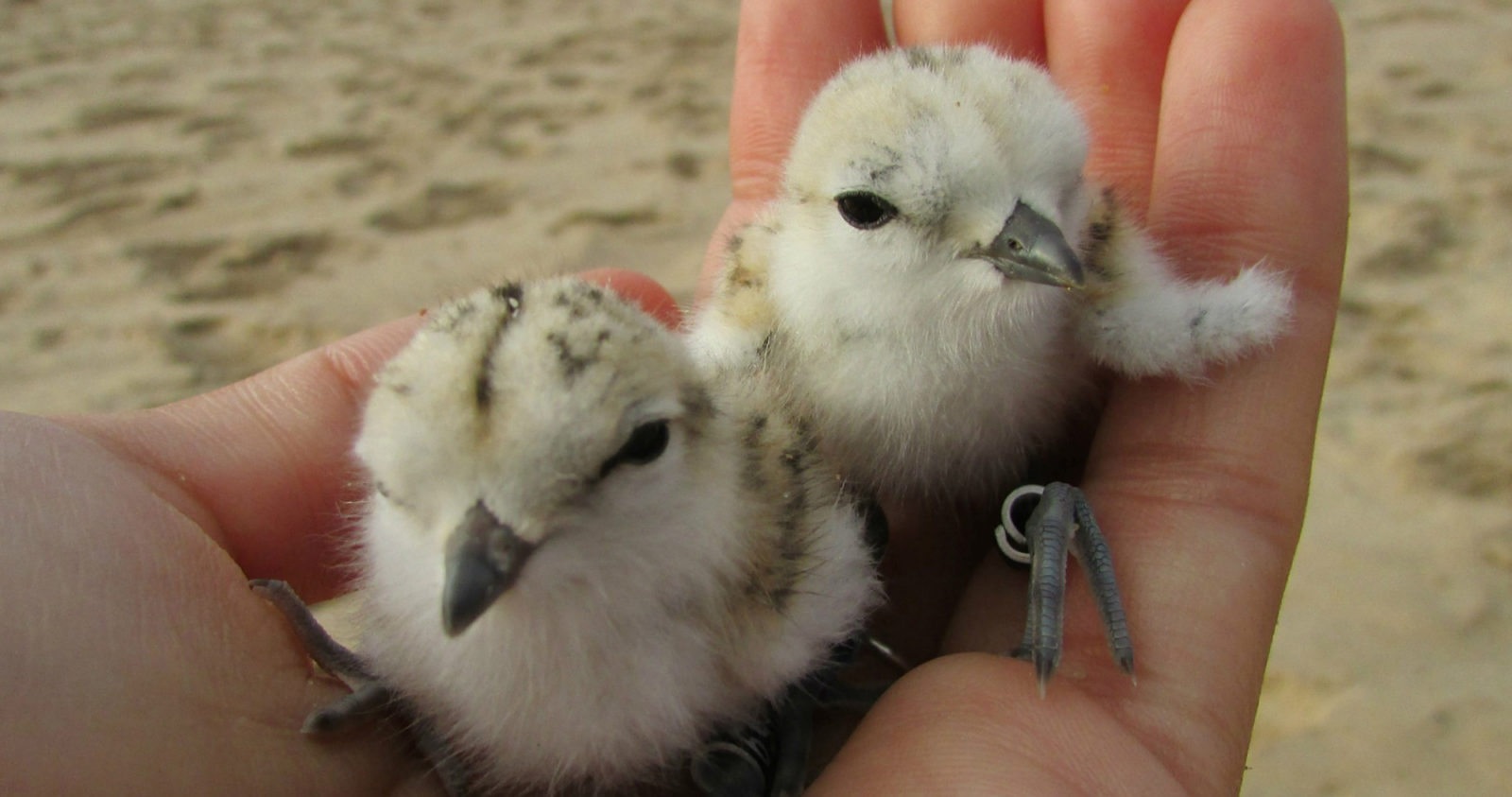 The cute sand-coloured shorebird is in decline in the Western Cape, with numbers dropping nearly 40% over the past 30 years. While dogs and beachgoers are partly to blame, there are things we can do to help.

Although we may not notice the small, well-camouflaged white-fronted plovers, or their tiny speckled eggs and chicks, the presence of humans and dogs in or near their dune and beach habitat reduces their breeding success.

Nests get trampled, causing parents to leave their eggs and chicks exposed to the elements — sometimes for long enough so that they perish.

Selena Flores has been working with shorebirds for about a decade and their camouflage still manages to fool her.

Her current PhD research, which is being conducted through the FitzPatrick Institute with support from the Nature’s Valley Trust, is on the white-fronted plover — a small, sand-coloured, ground-nesting shorebird.

Sadly, however, she explains that “within the Western Cape their numbers have declined nearly 40% in the past 30 years and, more alarmingly, their reduction in density has gone down about 60%”.

“They have also disappeared from some heavily disturbed beaches in the Cape Town region, like Gordon’s Bay and Bloubergstrand.”

On the Garden Route, she has found breeding success of just below 10%, which “is very low”.

Flores explains that the birds “generally choose to nest in low, sparsely vegetated hummocks — the little dune hills that you see going down to the beach — where they are going to have easy access to food sources, and they are also going to have good visibility of their surroundings. They want to be able to see where they can eat and what dangers are around.”

We won’t always know that the birds are there “as they are very small and very difficult to see. Being incredibly camouflaged, they disappear into the beach scene.”

The tiny eggs are laid in the sand and “they sort of get swallowed by this whole landscape of the speckling with the debris that occurs on the beaches”.

This means “there is a big risk of us or our dogs accidentally stepping on the birds and, in summer, when people flock to the beach, nests are trampled accidentally”.

In Plettenberg Bay, where Flores is conducting her research, she has found that white-fronted plovers will leave their nests when humans are about 26m away so that it isn’t obvious where the nest is.

“The birds fit in the palm of your hand so, at these distances, it is difficult for a beachgoer to be aware that a bird is there, let alone see the bird.”

Flores said the study showed that “walkers with dogs in the dunes, nearly every time disturbed a bird off a nest or from their area, and dogs off-lead disturbed them every single time in dunes”.

This study indicates that “if you are on paths with dogs, most of the time, birds will be scared away, but if you’re just on your own on a path, it is far less likely that the bird will respond to you”.

The research shows that “just because a dog isn’t chasing a bird, it is still seen as a threat by the birds. The birds don’t understand that the dogs are pets…

“It looks like the natural predators that go after plovers, so they’re not going to take any risks. They run away out of caution, leaving their eggs and chicks quite exposed and vulnerable.”

In South Africa, it is common for dogs to be walked freely on beaches. From observations in Plettenberg Bay, Flores found that “about 90% of the dogs were off the lead, so they were more likely to disturb birds than if they were on leads with their owners on a path or near the shore”.

One of the reasons that disturbing plovers from their nests is a problem is that it leaves the nests exposed to the elements for the time that they are away, which she found is an average of 5.5 minutes after each disturbance.

When the birds are kept away from their eggs, they are “not able to effectively incubate their eggs to keep them warm, or, in hot weather, shade them to keep them cool”.

Flores has conducted research using model eggs fitted with tiny temperature loggers, and she found that, in December, after only five minutes, plover eggs can reach temperatures of 41°C, which is the upper limit an egg can survive for long periods. After two hours it can reach 50°C, which is definitely fatal if left for long.

“This is quite concerning. If birds are being kept off the nest, they have a very, very small window of time to get back to their nest to make sure their eggs stay alive,” Flores explains.

“People lingering around nesting habitats will have a far more significant and far more negative impact of keeping the birds off the nest for much longer.

“Exposure of these nests and chicks to unfavourable weather conditions, whether that is heat, cold, wind or rain, might cause failure of the nest and, in general, when birds are being disturbed off their nest there is an increased likelihood that they will completely abandon their nesting attempt,” she says.

Beachgoers and dogs are not the only threat to plovers.

“Gulls in Plett will sit on the top of dunes or sit on information signs, and they will survey the area and wait and look for a person or a dog to come through an area and scare the plover or the oystercatcher off the nest.

“They are watching where that bird ran away from, and they will immediately go nab the eggs or the chick.”

Some species are most successful when there is neither too much nor too little disturbance in a system, which is referred to as the “Goldilocks principle”. For plovers, undisturbed beaches provide habitats for lots of other species to thrive, including more predators.

Flores explains that with the secluded or more heavily vegetated beach sites, like those in Keurboomstrand area — the least-disturbed beach area in Plettenberg Bay — there is a higher incidence of predators.

Flores says plovers don’t do well in protected areas. “The birds aren’t able to effectively raise their chicks or hatch their chicks because [there are] too many predators and too much of a variety of predators. You’ve got snakes, caracals, baboons, kelp gulls and birds of prey.”

On the other hand, “in more disturbed areas, such as Robberg Beach, there may be fewer predators, but there is no way these birds can effectively sit on their nests. Robberg Beach is just so busy, covered with footprints and heavily disturbed by people and dogs pretty much all the time.”

Just like for Goldilocks, it has to be just right. Flores says there is a “sweet spot” at Lookout Beach and at Nature’s Valley Beach, two of the smaller beaches in the area.

At these beaches “just enough disturbance has been occurring; they have a moderate amount of visitors coming through, which keeps some predators at bay, and the birds are not so disturbed… they can still look after their chicks and nests in order to get them to learn to fly”.

Based on concern for shorebirds, the Nature’s Valley Trust started the #SharetheShores programme in 2016 and the Lower Breede River Conservancy Trust has also used the programme on the beaches of Witsand in the Overstrand area.

The Scarborough Eco-Group also started its own programme in 2019 and similar initiatives will be started on Noordhoek and Kommetjie beaches in Cape Town.

Flores outlines ways that beachgoers can play their part to conserve shorebirds: keeping dogs on leads or away from beaches where they are not allowed; walking near the water or on the wet sand on the shore; watching where you step; taking all your rubbish, especially fishing gear, with you; and picking up any rubbish that you see. DM168

Using emergency powerships to solve the energy crisis sounds like a great idea, so what’s the problem with the Karpowerships?

They know the drill: Gift of the Givers steps up to sink boreholes for battling Joburg hospitals