My vaccine moment: Seize the time for a fundamental rethinking of capitalism 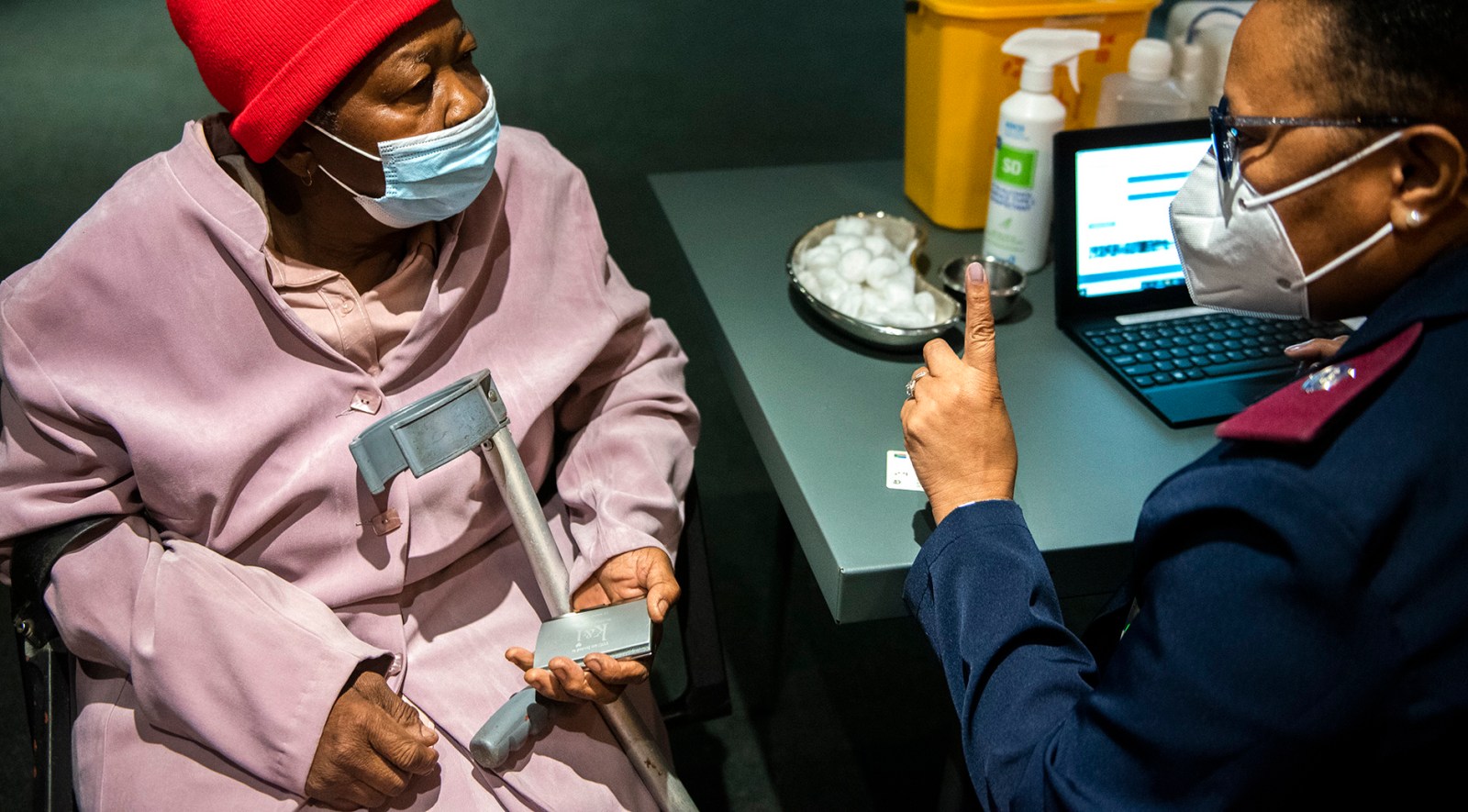 Nape Matjeding (67) gets her vaccination shot at the FF Robeiro Clinic at Sammy Marks Square vaccination site on 25 May 2021 in Pretoria. (Photo: Gallo Images / Alet Pretorius)

The coronavirus pandemic is not only a deep tragedy, it is also an opportunity for us to recapture that vision of a more egalitarian society.

Edward Webster is a Distinguished Research Professor at the Southern Centre for Inequality Studies.

I registered more than three weeks ago for my coronavirus vaccination. I waited for an SMS telling me the time for my appointment, but nothing seemed to be happening.

Being well over 60 I started to weigh my options; do I contact my medical aid and take advantage of my access to private healthcare or do I wait my turn? Then I heard from friends that they had simply “walked into” the Community Health Centre at 53 Klein Street in Hillbrow at 2pm on a Friday. They were vaccinated within an hour.

After reflecting on the options I decided that my vaccine moment had arrived.

I set off somewhat uncertainly at 8am on Friday towards a seriously rundown Hillbrow. As is well known, many parts of Hillbrow are in a shocking state of advanced decay. Much to my relief I was welcomed at the gate of 53 Klein Street by two enthusiastic security guards who escorted me to the expansive hospital parking lot. The hospital, a beautiful if somewhat weathered building that used to be the Wits Medical School, was buzzing with welcoming medical staff. There was a queue of chairs outside the building with about 20 expectant patients.

I joined the queue and sat down between two ladies, both, I discovered later, well over 80.

It was a beautiful autumn morning and the sun shone on us. I soon fell into light conversation with my neighbours, Agnes (not her real name), who proudly told me she lived in a flat in Hillbrow that had been bought for her when her “madam” left for Australia, and Pamela (not her real name) who said she lived with her daughter in Rosebank.

I soon realised that when it comes to the virus, we are all “experts”. We were relaxing, three elderly strangers, realising that we were in this together. I was reminded of a previous occasion, 27 April 1994, when we all queued to vote in our first democratic election, full of excitement and expectations of what a new nonracial democratic South Africa was about to bring.

The vaccine process was a well-organised “assembly line” of polite and professional service. We were ushered into the building in groups of six and discretely vaccinated in separate cubicles. We then gathered for 15 minutes in the “recovery room”. There was a sense of relief as if we had successfully passed a tough exam.

I was back home within two hours.

It was now my wife Luli Callinicos’s turn. I had broken the ice and now she was ready to take the plunge. By the time we arrived at 1pm for my second visit the queue had been reduced to half a dozen people and the process took less than an hour. Luli remarked on the warm and efficient service provided by these healthcare workers and the friendly camaraderie among the patients.

Of course, there was a mild side-effect – a sore arm where the vaccine had entered and a bit of a headache and nausea that evening. But after a good night’s sleep I was back to normal.

The day’s activities got me thinking. We had been given a free and efficient healthcare benefit by the much-maligned public health sector. What’s more, I had shared the experience with my fellow South Africans across the barriers of race and class. We had come together in harmony because we faced a deadly common danger.

As I said goodbye to my newfound acquaintances, Agnes and Pamela, I  said: “See you in three weeks’ time for the second dose of the Pfizer vaccine.” I felt for a moment, as I had in 1994, that we can build a common nation across the deep inequalities that continue to divide us.

The coronavirus pandemic is not only a deep tragedy, it is also an opportunity for us to recapture that vision of a more egalitarian society.  At the height of World War 2, the deadliest conflict in human history with an estimated 70 to 80 million deaths, civil servants in the UK were told to collaborate with economists like John Maynard Keynes and liberal politician William Beveridge to plan for a better life for all.

The Beveridge Report, published in the UK in November 1942 at the height of the war, provided the foundations for the welfare state. It set out to overcome the “five giants” of “want, disease, ignorance, squalor and idleness”. Out of the tragedy of war a new vision of a common national health service was built. It was the reward that Clement Atlee’s postwar Labour government offered the people of Britain for the deep sacrifices they made during the war.

What vision are we building to compensate for the sacrifices made during this deeply destructive pandemic? Is the proposed National Health Insurance a realistic step in this direction or is it a hopelessly unrealistic vision of a failed state? I think the pandemic has put this challenge unequivocally on our agenda.

Could this vaccine moment be an opportunity for us to build a public health sector that brings us together to be served by a community of healthcare workers committed to the public good?

Ian Goldin, past CEO of the Development Bank of Southern Africa and now a professor at the University of Oxford, poses a similar question in a global context in his recently released book, Rescue: From Global Crisis to a Better World. What is needed, Goldin believes, is a fundamental rethinking of capitalism.

Big government and the activist state are back, he says. The pandemic has led to a counterrevolution, with conservative governments going beyond even Keynes’s arguments in the 1930s that governments needed to spend their way out of the Great Depression. Unless inequality is reduced, he warns, populism and protectionism will become dominant. “The tragedy is that the policies implemented by these populist leaders benefit the few, not the many, thereby deepening and entrenching inequality,” he writes.

For Goldin, this global trajectory of populism is not inevitable. He believes it is human actions and leaders that shape societies, not simply events. I am inclined to agree with Goldin. But where such leadership would come from and what social forces are to drive it are the enduring questions left by my vaccine moment. DM/MC

Webster is the founder of the Society, Work and Development Institute (SWOP) at the University of the Witwatersrand, which he directed for 24 years. He is the author of seven books and more than 100 academic articles as well as numerous research reports. Among his publications is Grounding Globalisation: Labour in the Age of Insecurity, written with Rob Lambert and Andries Bezuidenhout. Winner of the 2008 Distinguished Scholarly Monograph Prize, awarded by the American Sociological Association’s Labor and Labor Movements Section. He is currently completing a manuscript on Work and Inequality in the Digital Age, a southern perspective on the future of labour. Webster has been awarded an honorary doctorate by Rhodes University and Wits.