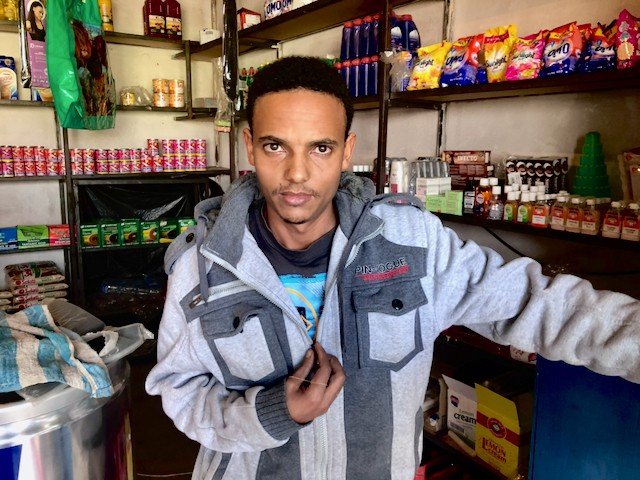 Ashagre Shaebo (pictured) says police took R15,000 from him but gave him a receipt for only R7,500. They also demanded R5,000 “bail” to release him. (Photo: Kimberly Mutandiro)

Police in the township say they confiscated R63,000. The shop owners claim it is more than double that amount.

Immigrant spaza shop owners in Diepsloot say they have been struggling to recover tens (if not hundreds) of thousands of rands confiscated by police during Operation Okae Molao two months ago.

The shop owners GroundUp spoke to all tell a similar story. They say their shops were raided, they were handcuffed, and their cash was taken. They spent a day in police cells and were released after paying the police R5,000 “bail”. They were never charged or taken to court. The “bail” money was not officially recorded.

Police subsequently issued them receipts for the money confiscated, but it is usually 50% of the actual amount taken according to the shop owners.

They say they have tried to open cases for the missing money, but police refuse to open any dockets.

According to an Ethiopian community leader, Desta Markos, the community has now engaged a lawyer, Thebe Kganare.

“One thing l fail to understand is the confiscation of cash by police … My clients are asylum seekers who do not have bank accounts … Unfortunately some rogue police take advantage of immigrants,” said Kganare.

Diepsloot police spokesperson Tinyiko Mathebula said, “Okae Molao operation was conducted in the area on 4 March. Counterfeit goods and cash were confiscated. An amount of R63,000 was paid into the state account. The money is still there.”

“The complainant needs to get a lawyer and claim the money back. If they allege that the money which was recorded is not the actual amount which was confiscated by police then they should open a case so that the matter can be investigated. If there is no case we will not be able to investigate.”

He said he had no knowledge of police refusing to open cases for the shop owners.

But the shop owners tell a different story. Ashagre Shaebo said he is struggling to pay suppliers and restock his shop and he can’t send money to his dependents in Ethiopia. He said police took R15,000 from him in March. He said they tore his shop apart, saying they were looking for counterfeit merchandise.

“Afterwards they cuffed both my hands and took me to the police station where we spent a day in the cells. They demanded R5,000 ‘bail’ and promised to give my money back after paying, but to date l don’t have the money back. When we went back to check they claimed that they found only R7,500 and gave [me] a receipt,” he said.

David Awara says police cuffed both him and his brother to the burglar bars in front of their cash counter. They searched the shop and took R100,000.

“On that day we were expecting suppliers to come and get their money. The whole R100,000 belonged to our cigarette suppliers who give us stock on credit,” said Awara. “I try to be strong as a man but the issue is killing me inside.”

He said police gave him a receipt for R50,000 after his release.

Akililu Fikeli says police took R5,000 from him and cigarettes.

“I have thought of going back home [Ethiopia], but everyone there is looking up to me to bail my family out. They sent me here and l cannot look back. There is civil war in my country,” he said.

Habitoold Shigute claims that over the past two years he has been fleeced of about R165,000 by police. In March police took R18,000 from him at his shop and a further R9,000 from two other shops he operates.

“We are easy targets because police know that we do not have bank accounts,” he said.

The regional police spokesperson failed to respond to our queries as to why cash was confiscated in the first place, on what charges were the men arrested, and on what basis was “bail” money demanded. DM