Hopewell Chin’ono: Zimbabwean journalist on trial for … what precisely? 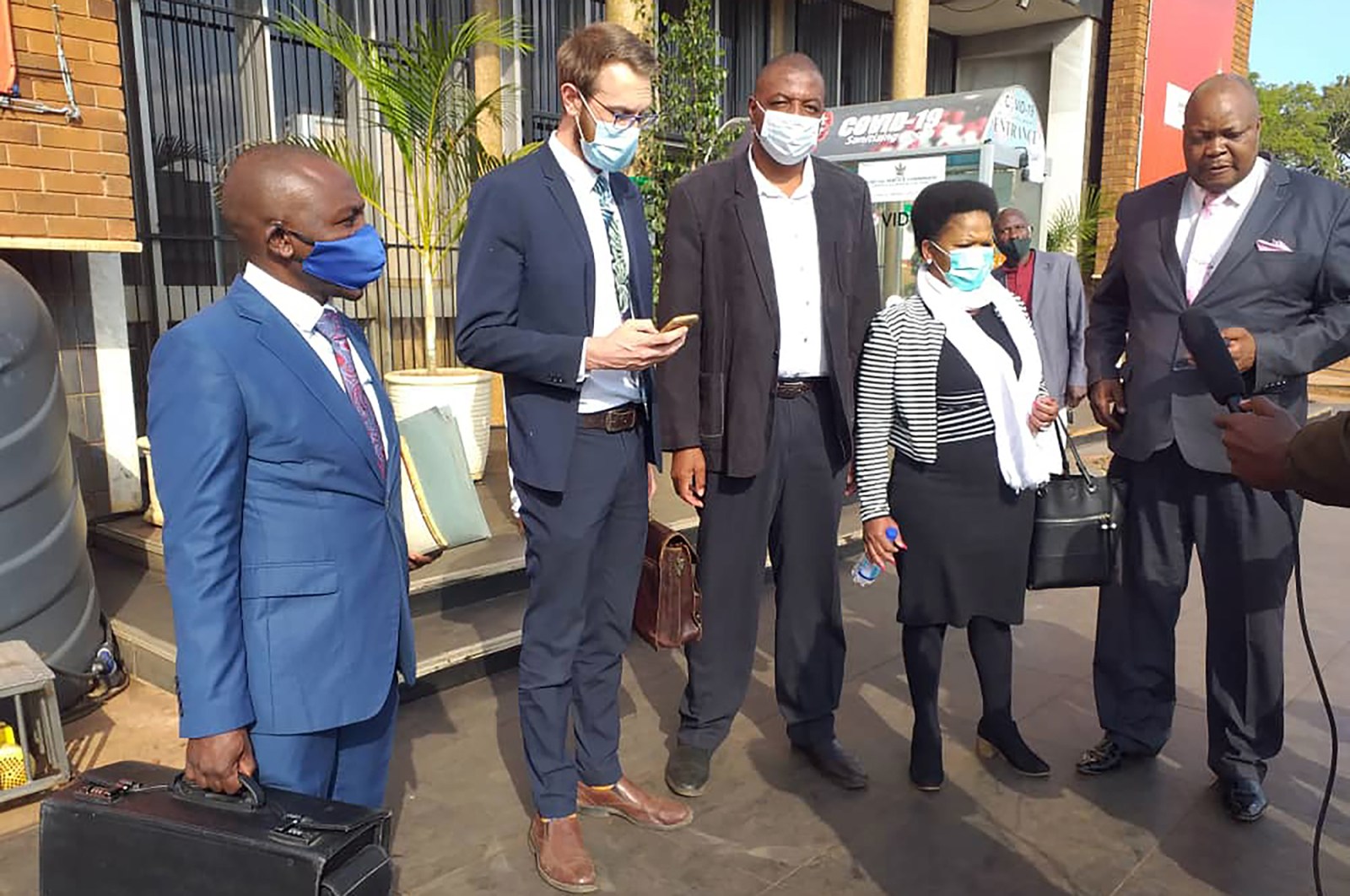 Hopewell Chin’ono with his lawyers at the Harare Magistrates' Court. (Photo: Frank Chikowore)

The state’s charges are ill-defined and the trial was delayed again.

The trial of prominent Zimbabwean journalist and anti-corruption activist Hopewell Chin’ono, accused of inciting public violence, failed to kick off at the Harare Magistrates’ Court on 19 May after his lawyers filed for exception to the charges.

The state alleges that Chin’ono incited Zimbabweans to revolt against President Emmerson Mnangagwa’s administration using his Twitter account, after commenting on calls by the convenor of the July 31st Movement, Jacob Ngarivhume, for Zimbabweans to hold street protests on 31 July last year against the Harare administration’s failure to properly run the affairs of the southern African country.

In his application for exception to the charges, Chin’ono, through his attorneys led by Beatrice Mtetwa, argued that the charges against him were “replete with basic failures and do not inform him of what the exact criminal allegations against him are” and therefore the charges should fall.

Mtetwa added that the incitement charges against Chin’ono were a legal nullity that offends against the provisions of a section of the Criminal Procedure and Evidence Act, which require that “each count of the indictment, summons or charge shall set forth the offence with which the accused is charged in such manner and with such particulars as to the alleged time and place of committing the offence … as may be reasonably sufficient to inform the accused of that charge”.

She also said Chin’ono’s rights as a journalist were being infringed by authorities. “The accused is a journalist who has constitutionally protected rights to practise his profession, and who is also constitutionally allowed to disseminate information. The fact that the Annexures make it clear that he was merely reporting what Ngarivhume and others were doing is therefore beyond doubt. The charge must therefore clearly state why the state thinks his reportage was outside normal permissible journalistic communications,” said Mtetwa.

Mtetwa’s court submissions were buttressed by a statement from Reporters Without Borders (RSF), which reported that Zimbabwe had fallen on the World Media Freedom Index (#rsfindex2021) since the late Robert Mugabe was ousted by Mnangagwa in November 2017. It had been hoped the repression of freedom of speech would lift somewhat after Mugabe was removed.

“However, Mnangagwa was notorious for suppressing dissent when he was national security minister and his first steps with regard to press freedom have been marked more by promises than anything like the concrete progress for which journalists had hoped,” says RSF.

The prosecution, led by Lancelot Mutsokoti, is of a different view.

“We have properly laid the basis of the charges and the application for exception to the charges lacks merit. The accused must face trial,” said Mutsokoti. Magistrate Vongai Muchuchuti Guwuriro said she would deliver her ruling on Chin’ono’s application next week. As Chin’ono left the court on 19 May, anti-riot police barred his lawyers from addressing journalists who were waiting outside the courtroom for updates. This action was criticized by Zimbabwe Lawyers for Human Rights, which said lawyers should not be hindered from representing the interests of their clients.

If the magistrate rules in favour of the application, this will be Chin’ono’s second victory within a month – after the High Court recently quashed the charges of “communicating falsehoods prejudicial to the state” that had been laid against him. It was found that he had been charged under a law that had been expunged from the country’s statute book.

Like Chin’ono, some opposition were recently arraigned in court for allegedly “communicating falsehoods”.

Charges against Chin’ono were brought against him after he posted a video on his Twitter account showing a police officer beating a baby to death while enforcing Covid-19 containment regulations.

Yet Chin’ono, who is on bail pending trial, is still facing another charge of obstruction of justice, after he allegedly used his Twitter handle to comment on a case that was pending before the courts. The case involved the arrest of the president of Zimbabwe Miners Federation, Henrietta Rushwaya, who is facing charges of attempting to smuggle 6kg of gold to Dubai through the Robert Gabriel Mugabe International Airport.

For his part, Chin’ono, who uncovered corruption in the acquisition of Covid-19 medical supplies, says he is being persecuted for exposing corruption.

Chin’ono’s exposé resulted in Obadiah Moyo being fired by Mnangagwa and replaced by Vice-President Constantino Chiwenga as health minister.

While Chin’ono awaits a ruling on his application, there is tension between the judiciary and Mnangagwa. The president suffered a major setback last week when a panel of judges of the High Court ruled that Luke Malaba (70) could not have his term of office extended, as Mnangagwa, who used his presidential powers to extend his term, had wanted.

Justice minister Ziyambi Ziyambi was criticised by several lawyers and taken to court for contempt after he objected to the ruling before appealing the High Court’s ruling in the Supreme Court.

The opposition Movement for Democratic Change, which accuses Mnangagwa of conniving with Malaba to arm-twist the judiciary to rule in favour of the president in the 2018 election petition, celebrated the ruling.

Mnangagwa was obliged to issue a statement reaffirming the independence of the judiciary. In the meantime, Deputy Chief Justice Elizabeth Gwaunza is the Acting Chief Justice, awaiting an appointment of a substantive chief justice by Mnangagwa.

Some government sources say the chaos in the judiciary is a reflection of a power struggle between Mnangagwa and his deputy, Chiwenga.

The opposition MDC is complaining that its members continue to be arbitrarily arrested in what the party calls “trumped up charges”, while authorities continue to ban opposition gatherings.

The deputy national spokesperson of the MDC, Clifford Hlatshwayo, said it was worrying that the ruling Zanu-PF party was being allowed to stifle opposition in this manner.

“It is very clear that Mnangagwa wants to create a one-party state but we are mobilising Zimbabweans for the upcoming elections and the people of Zimbabwe will surely speak in 2023,” said Hlatshwayo, adding that the Zanu-PF government had now captured courts in order to, among other things, cripple the MDC.

MDC activist Makomborero Haruzivishe, who faced incitement charges similar to those faced by Chin’ono, was recently jailed for 14 months.

Harare West legislator Joana Mamombe and another member of the opposition’s youth wing, Cecilia Chimbiri, spent close to two months in remand prison on charges of violating Covid-19 regulations before being released after posting bail money.

This after they addressed a press conference in the course of another trial, in which they are accused of faking their abduction by agents of the ruling party.

Mamombe and Chimbiri, along with fellow youth leader Netsai Marova, say they were abducted in May 2020 after an MDC youth event and beaten and sexually assaulted. DM168