(Bloomberg) --China will allow all couples to have a third child, a surprise move aimed at slowing the nation’s declining birthrate as risks to the economy’s long-term prospects mount because of a rapidly aging population.

In a meeting presided over by President Xi Jinping Monday, the Communist Party’s Politburo decided to ease the current two-child restriction, saying “allowing every couple to have three children and implementing related support policies will help improve the population’s structure,” according to a report by the official Xinhua News Agency. It wasn’t clear when the move would take effect, although the meeting discussed major policy measures to be implemented in the period to 2025.

China has been gradually reforming its stringent birth policy that for decades limited most families to only having a single child, with a second child allowed since 2016. However, that reform did little to reverse the declining birthrate and further relaxation of the limits is unlikely to lead to a sustained increase.

Why China Is Struggling to Boost Its Birth Rate: QuickTake 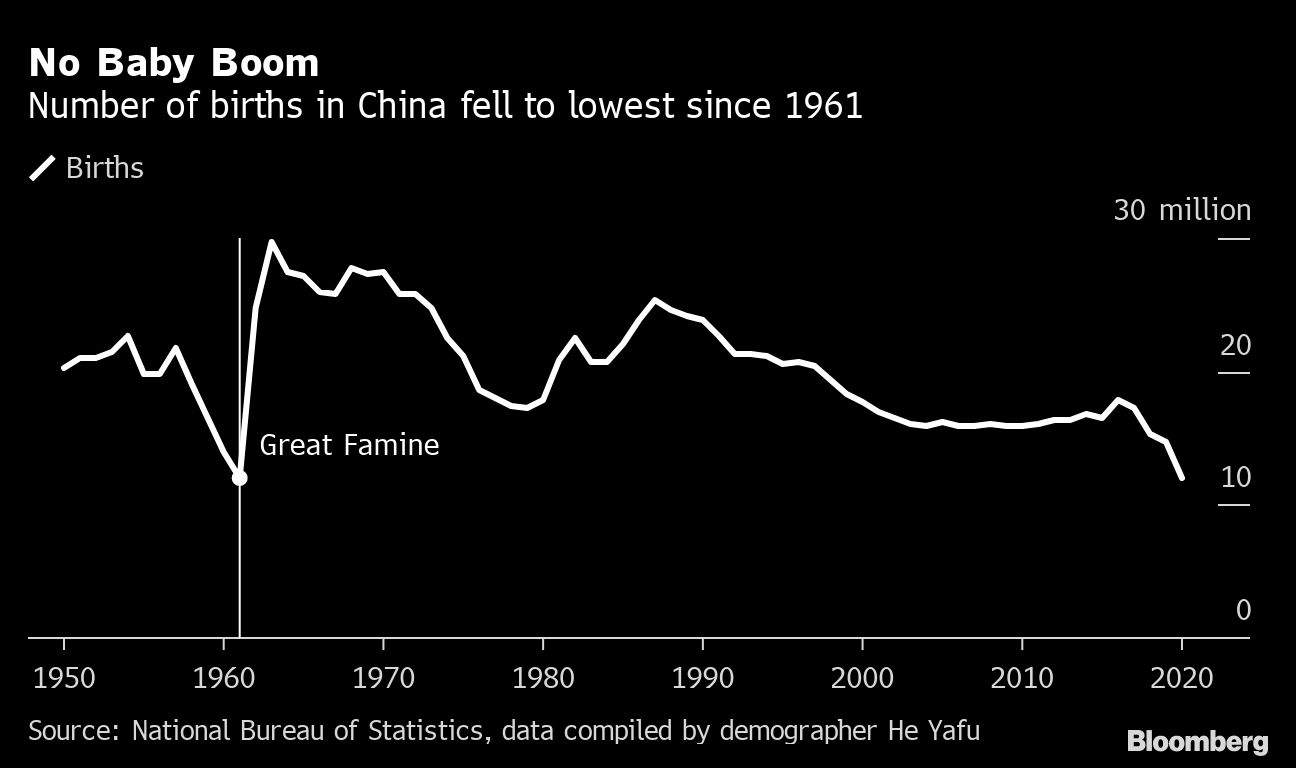 Some government officials, including researchers at China’s central bank, have called for birth limits to be abolished entirely. The debate was intensified after the results of China’s latest national census earlier this month showing a decline in the country’s working-age population over the last decade.

The Politburo also announced the government “will prudently lift the retirement age in a phased manner,” according to the Xinhua report. China has one of the world’s lowest official retirement ages, and the Communist Party announced plans to reform the system last year.

The declining birthrate means China’s population, currently at 1.41 billion, may begin to shrink before 2025, according to Bloomberg Economics estimates. There were 12 million new babies born last year amid the uncertainties of the coronavirus pandemic, the lowest number since 1961.

Read More: China Bets on Productivity Over Population to Drive Its Economy

“The Politburo probably saw the latest census results and with all the public consensus about a change, it’s easier now to make a decision,” said Henry Wang, president of the Center for China and Globalization, a think-tank linked to China’s government. “They probably need some time before they completely drop” the birth restrictions, he said. “If this adjustment doesn’t help, then that would help them make a future decision,” he added.

The policy change was quickly mocked on Chinese social media, with many people lamenting the fact that couples from single-child households would now have to raise three children while supporting four elderly parents and repay heavy mortgage debt. It also triggered concerns over women’s employment, with some saying that it will become even harder for females to get a job as companies are unlikely to be willing to shoulder the costs.

China’s new three-child policy is a step in the right direction but it’s not enough to head off an inevitable demographic drag on the economy. Other steps, including birth- and parenting-friendly policies and an increase in the pension age, are needed as quickly as possible if China stands a chance of slowing a looming decline in its workforce and crunch from an aging population.

The trend toward fewer births is likely to continue even with a looser birth policy, according to demographers. As in East Asia and Europe, preferences have shifted toward smaller families. A spike in births following the previous relaxation to allow most families to have two children was short-lived, with many parents citing the high costs of housing and education as a limiting factor.

“For those people who are rich, relaxing the policy will encourage them to have more children but for the common citizens, like the middle class or even the lower class, they don’t have enough incentive to make use of this new policy,” said Vivian Zhan, an associate professor of Chinese politics at the Chinese University of Hong Kong.

“We would not expect the policy change to make a major difference to the overall patterns of fertility in China, net of other changes to the environment of family building,” said Stuart Gietel-Basten, director of the Center for Aging Science at the Hong Kong University of Science and Technology, adding that the policy helped remove “a clear inconsistency in the narrative surrounding the concerns over low fertility with restrictions on births at the same time.”

China has maintained rapid economic growth in recent decades despite its slow population growth, with migration to cities propelling a shift from agriculture to factory and service work, which increased economic output per worker. The current proportion of people living in urban areas of about 64% is roughly on par with the U.S. in 1950, suggesting potential for further catch-up. Delaying retirement would allow China to expand its workforce without increasing its birthrate.

But a lower birthrate will lead to a bigger elderly population. To maintain economic growth, Beijing will need to rapidly increase spending on pensions and health care while maintaining a high-level of corporate and state investment in order to upgrade its vast industrial sector and increase education levels, according to economists.

The right mix of policies could mean China becomes the world’s largest economy, continuing to propel global demand for commodities in the coming decades, while its gray consumers become a vast market for multinationals, with a huge pool of pension savings targeted by global finance companies. A less effective response could mean China never overtakes the U.S. in terms of economic size, or does so only fleetingly.

China’s fertility rate began a steady decline from the 1970s, as education levels increased and the government encouraged rural women to have fewer children, culminating in the national “one child” policy which applied to most women from the end of that decade. The policy was often harshly enforced, especially in countryside areas where officials sometimes ordered women to have abortions.

The government is aiming to gradually raise the retirement age from the current level of 60 years for men and as low as 50 for women, and plans for 50 million people to move permanently from rural to urban areas in the next five years to take up service and manufacturing jobs with higher wages.

“The policy shows that China faces a serious problem of an aging population, shrinking labor force,” said Hao Zhou, senior emerging markets economist at Commerzbank AG. The decline of the labor force in coming years is set to be a drag on economic growth and contribute to higher inflation globally, as the cost of goods rise, he said.

–With assistance from James Mayger and Philip Glamann.