Rubber bullets: Banning them is not impossible — it’s imperative 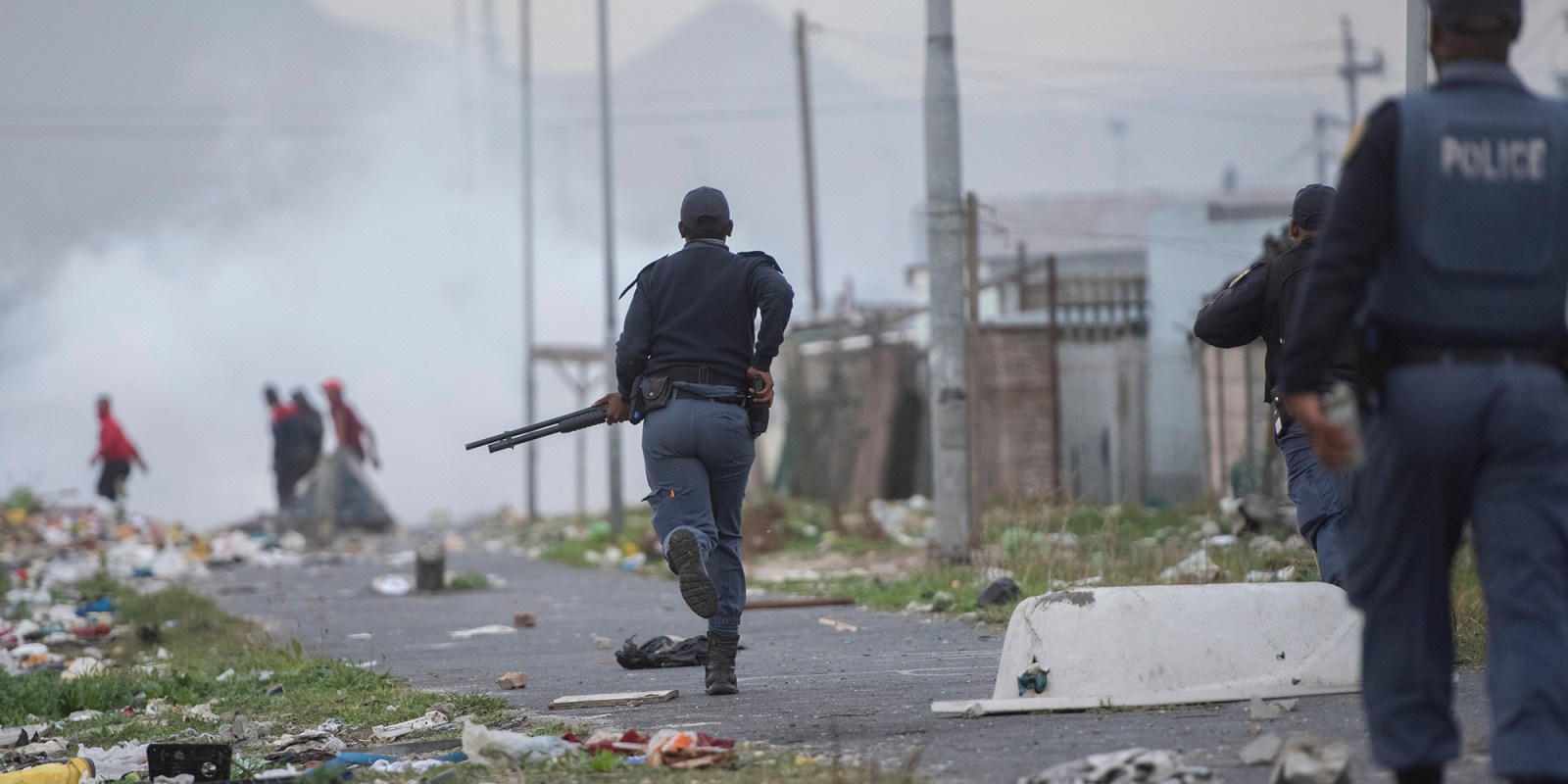 Police clash with residents during a protest on 24 May 2021 in Wesbank, Cape Town. (Photo: Gallo Images / Brenton Geach)

At a press conference on 29 March, the Minister of Police Bheki Cele finally released the Panel of Experts Report on Policing and Crowd Management. The government urgently needs to implement the recommendations of the panel report fully and align the provisions of the SAPS Amendment Bill with the report.

Thato Masiangoako is a researcher at the Socio-Economic Rights Institute and Dr Mary Rayner a research associate at the University of London. Masiangoako and Rayner are members of the Anti-Repression Working Group of the C-19 People’s Coalition.

The panel of experts, both international and local, were appointed in 2016 by then Minister of Police Nkosinathi Nhleko in terms of recommendations of the Farlam Commission of Inquiry into the large-scale deaths and injuries at Marikana in 2012. The panel completed and submitted its report in July 2018.

Minister of Police Bheki Cele provided no explanation at March’s press conference for the long delay in the release of the report — despite the gravity of the incidents at Marikana in August 2012 and continuous evidence of police using excessive force against individuals and communities since then.

The release of the report came two weeks after the unlawful and fatal shooting of an unarmed “bystander”, Mthokozisi Ntumba, on 11 March. Ntumba was killed by police during their dispersal operation and pursuit of student protesters in Braamfontein. A video clip shows the police pulling up to a group of people standing on the sidewalk. As they fire shotguns, an injured, unarmed man collapses on the sidewalk near a medical facility from which he had just emerged.

Given this tense and politically sensitive climate for the police ministry, it was especially disheartening to hear National Commissioner of Police Lieutenant-General Khehla Sitole emphatically dismiss a suggestion from a question at the press conference that the use of rubber bullets be banned.

In crowd incidents, police frequently use 12-gauge shotguns which fire two rubber bullets in rapid sequence — known as kinetic impact projectiles (KIPs). Police reliance on this weapon has continued despite the obligation to limit its use under South African policing legislation. National Instruction 4 of 2014 on “Public Order Police: Crowd Management during Public Gatherings and Demonstrations” explicitly prohibits the use of “approved rubber rounds” for crowd dispersal except in “extreme circumstances”.

Multiple-projectile KIPs, like shotguns that fire rubber bullets, can be lethal when fired at close range and if aimed above the waist area, which is what happened to Ntumba and to Andries Tatane in Ficksburg 10 years earlier.

However, when used at greater distances, these weapons are inherently inaccurate and indiscriminate due to the lack of control over the direction of the bullets fired, and, when skip-fired towards the ground, there is no telling where the ricocheting projectiles will land. They are likely to cause serious injuries. Consequently, as noted by the UN Office of the High Commissioner for Human Rights (OHCHR), these weapons cannot have a lawful role in crowd management and dispersals.

These risks, in the context of public order policing, can and should be addressed and have been in some countries where medical research has documented related deaths, injuries and disability due to penetrative and blunt trauma caused by KIPs.

In Chile, where the security forces had used a similar weapon to suppress protests in late 2019, the level of “ocular trauma” and facial injuries was so concerning that the national legislature prepared a draft law to prohibit law enforcement officials from using weapons that contain multi-ball cartridges.

Instead of this more proactive and robust approach, the national police commissioner simply insisted that “it will be impossible to stop the use of rubber bullets”. Instead, he noted that the Standard Operating Procedures would be changed and a new national instruction would be issued stipulating “how they should be utilised […] and will further prescribe the distance” at which they can be used. He also noted that training would be intensified “so that [police] become more professional in utilising rubber bullets”.

The national commissioner’s response appears both careless and misguided. His comments reflect the disconnect between police leadership and the lived realities of victims of police violence. They fail to offer a solution that addresses the pattern of chronic misuse of this weapon, its inherent operational risks as shown by diverse global examples and the existing pattern of injuries and deaths arising from its use by the police.

On this issue, the expert panel recommended that “the SAPS should explore the possibility of equipping POP [public order policing] units with Safe Impact Rounds (SIRs) or Attenuated Energy Projectiles (AEPs) and launchers […] as possible replacements for rubber rounds or as an additional less lethal option which may be used as an alternative to rubber rounds in specific circumstances”.

One panel member recorded a dissent to the recommendations on the use of KIPs: “KIPs should be entirely prohibited in crowd management situations”, including rubber bullets.

The panel also recommends the weapon be used “only under strict command” and that, at the minimum, SAPS members should be enabled and obliged to implement any use of KIPs in a manner consistent with the “principle of differentiation”, as described in the panel report.

This principle holds that police must not treat protesting groups as homogenous, but rather carefully distinguish between protesters and individuals in the group involved in acts of violence “so that the rights of the former can be respected, protected and facilitated”. Where the use of force is unavoidable or necessary, it must be targeted at identified individuals as opposed to a crowd as a whole.

However, deaths and injuries that occur from incidents caused by miscalculations, recklessness or from the uncontrollable nature of the weapon in the use of force are only a part of the problem. The danger, for members of the public, is the violent nature of public order policing and the impunity with which police can act.

As a recent Viewfinder investigation shows, the culture of impunity within the police is bolstered by a failure to hold them accountable for unlawful use of force. This lack of accountability further compounds the dangers of having SAPS officers armed with such a mechanically flawed weapon.

Take, for example, the police shooting of 14-year-old Ona Dubula in 2017 during a fishing rights protest in Hangberg. The boy was shot four times at close range in the mouth and ribs. At the time he was shot, he had been hiding behind a wooden table with two other people. From IPID records, the disciplinary conviction by SAPS was a final written warning. However, the outcome of IPID’s criminal recommendation to the National Prosecuting Authority (NPA) is unclear.

The police response to the student protests at the University of the Witwatersrand in late 2015 and 2016, documented in a 2017 report, present examples of grave injuries caused by the disproportionate use of force and in some cases blatant brutality. In the course of their on-campus and nearby operations, police fired 2,624 rubber bullets against unarmed students, humanitarian workers and others who posed no threat to public safety when shot. Even with extensive documentation and medical evidence of injuries, accountability in these cases has been scarce.

In one of the documented cases, on 10 October 2016, police had been firing from a moving armoured vehicle into the grounds of the Trinity Church in Braamfontein where humanitarian workers were treating injured students and where other students were sheltering. After a period, police pulled up at the entrance gate with their vehicle directly facing the priest and opened fire with their shotguns, less than five metres away. The priest had been preventing the police from entering the church premises. Medical and ballistics evidence confirmed his facial injuries were caused by direct shots. Although a senior police official later visited him to apologise, promising an investigation, no further steps appear to have been taken.

The National Commissioner’s proposal to change the Standard Operating Procedures and intensify training on the use of rubber bullets is of little comfort to victims of police misuse of force who have been injured, maimed or lost loved ones. They do not address the fundamental problems with public order policing and the dangers of this particular weapon.

The right to freedom of peaceful assembly is a fundamental human right protected under the Constitution. The police, under the leadership of the minister of police and national commissioner, have a duty to promote and facilitate this right for people wishing to exercise this right. To do so, the recommendations of the panel report must be implemented as a matter of urgency. Further, the government should align the provisions of the SAPS Amendment Bill with the report.

Whether participating in a protest or being a bystander, people should not have to fear that they will be gravely injured or killed by police because of a failure to ensure that, at the very least, the weapons used are appropriate for public order situations. DM/MC