Be true to science and kind to patients, says healthcare giant Jerry Coovadia 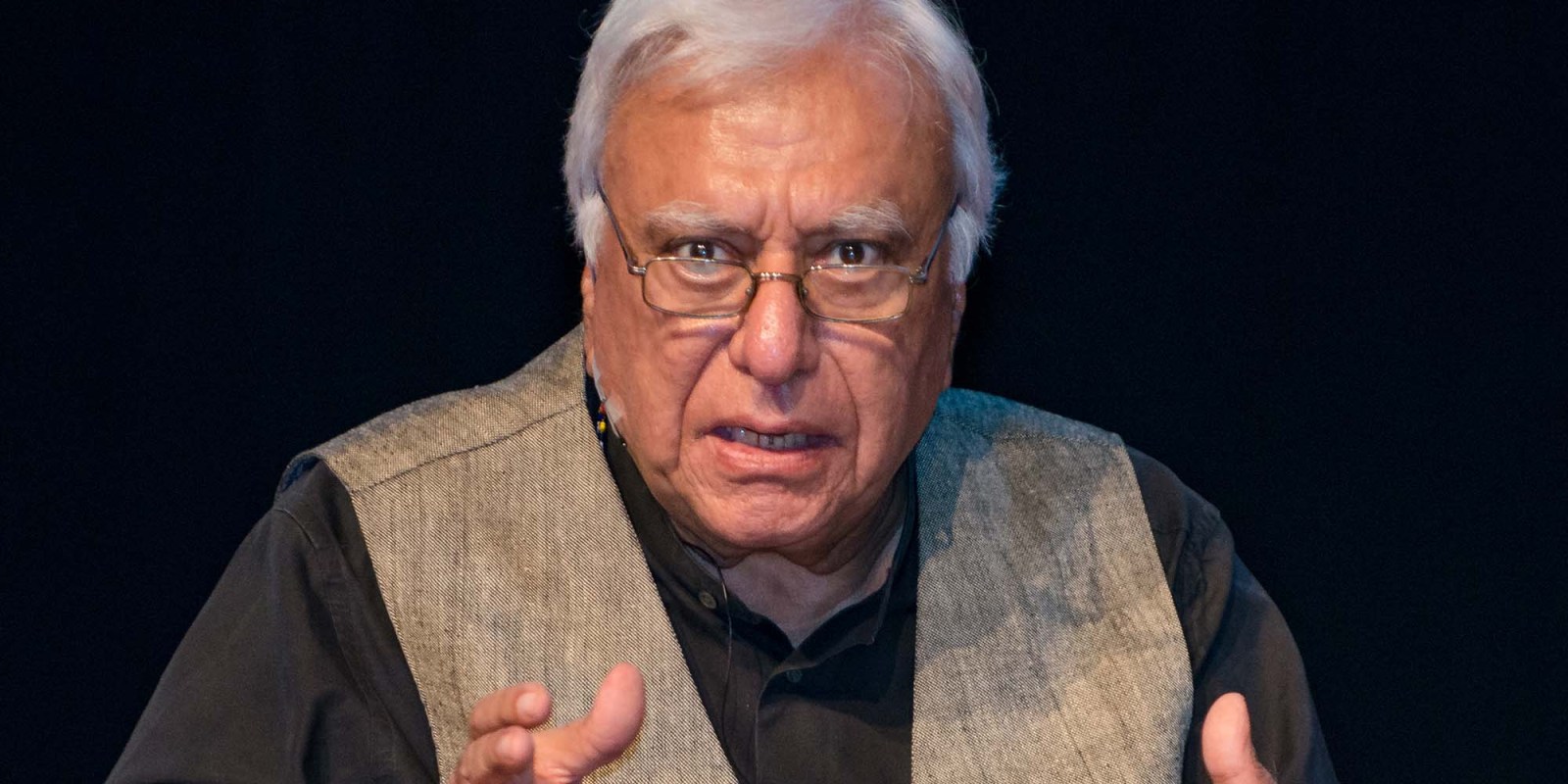 Last month, Professor Hoosen ‘Jerry’ Coovadia’s textbook ‘Coovadia’s Paediatrics & Child Health’ was released in its seventh edition — 819 pages thick — 37 years after it was first published in 1984, but it is his work on HIV/Aids transmission from mothers to babies that he is most famous for. Spotlight asked Coovadia about his legacy and his advice for the medical community.

Be true to science; be kind and gentle to patients.

These are the lessons Professor Hoosen “Jerry” Coovadia, once said to be “like a Nelson Mandela for health” and a “giant in medicine”, wishes to impart to healthcare workers today.

The 80-year-old anti-apartheid veteran, top paediatrician and global authority on HIV provoked the wrath of former president Thabo Mbeki’s Aids-denialist government 20 years ago as he defended scientific integrity and campaigned for access to antiretrovirals (ARVs) as HIV swept across the country.

In turn, Tshabalala-Msimang had insinuated that Coovadia wasn’t “a loyal South African”, even though Nelson Mandela had bestowed on him the Star of South Africa just the year before, for his contributions to democracy and health.

“No, for me that did not take courage,” Coovadia tells Spotlight over a landline from his apartment in La Lucia, Durban. “You see, I had my profession, my science. If I hadn’t spoken out, I would have been untrue to science, which to me is a fundamental belief. It determines how I live and what I believe and how I should do things in life.

“Mbeki was just hopelessly, hopelessly wrong. It was just ridiculous what they were saying. Which was puzzling, as Thabo Mbeki is an intelligent man. Manto, she was a pain in the neck. A ridiculously ignorant person.”

The makings of a good doctor

“Good doctors must, must, must stick to their scientific methods. Don’t believe the drama and rubbish other people are speaking [about]. Follow your training, take science to the highest possible level. You’ll be serving a great purpose to humankind.

“And then, remember that you are human and that your patients look up to you. You have to be careful how you treat patients. For me, many of the people I saw, many of them were poor and not well informed, and one has to be really gentle and kind. Focus on not offending them, always give the best information and treatment.”

Last month, his textbook Coovadia’s Paediatrics & Child Health was released in its seventh edition — 819 pages thick — 37 years after it was first published in 1984. Until the early 1980s, paediatric textbooks in South Africa were British with no material addressing the particular problems of children in southern Africa, he explains.

Spurred by social pressures in the country, Coovadia built a career researching problems where a grassroots impact could be made. This included immune deficiency in children, malnutrition, whooping cough and measles, but it is his work on HIV/Aids transmission from mothers to babies that he is most famous for.

“So we knew that the virus [HIV] is transmitted through breastfeeding,” says Coovadia. “But we were one of the few groups, probably one of the only groups in the world, arguing that breastfeeding is too important to discard. So we spent a lot of time finding alternatives, and the main alternative was to see that any woman who breastfed is adequately covered with ARVs. Today mother-to-child transmission has almost been wiped out, it’s hardly anything.”

An article on Coovadia’s legacy in the medical journal The Lancet points out how some scientists [writing in The New England Journal of Medicine] were critical of the fact that placebos were used in an important study (at a time when ARVs weren’t yet widely available). At the time, Coovadia defended the use of placebos, however saying that the experience was a valuable lesson in research ethics.

Reflecting on this now, he says: “Well, you know, you either do a proper scientific study, or you don’t. I remember, when I was working on the breast milk there would be placebos, but it was always well controlled.”

“He’s been honest and open. I know him well because he was my student at the medical school [former University of Natal],” says Coovadia. “He is at least informed, you’re not going to have ridiculous treatments or whatever.”

Referring to the Covid tragedy in India, he says: “I’ve been watching on TV. And really, I just can’t believe how bad things can get. Really bad things are happening because of the collapse of their health services. It’s a dreadful mess at the moment, it’s gone chaotic. Do I have solutions for them? No. You’d need the wisdom of Solomon to find solutions there now. It’s going to last quite a long time and cost many, many lives.”

Deciding on a career in medicine

Coovadia has lived in La Lucia with his wife Dr Zubeida “Zubie” Hamed, a dermatologist, for 23 years. Their children are novelist Professor Imraan Coovadia of the University of Cape Town and healthcare consultant Dr Anuschka Coovadia.

During the interview, Coovadia stops several times to corroborate facts and dates with Zubeida: “Excuse me, let me check that with my wife…”

With humour Coovadia recalls growing up in the Warwick triangle, near Durban’s Indian market: “It was a rough neighbourhood,” he says. “And I wasn’t exactly a muscle man, so… There were a lot of thugs, I didn’t get in their way if you know what I mean.”

He relays how as a teenager he found refuge in novels at the municipal Brook Street Library — built in 1952 — where his uncle was the first librarian. He grew up reading both the Quran and the Bible, having been born into a Muslim family while attending a Catholic school.

At the time, bright youngsters from middle-class Indian families opted for careers in medicine, law or commerce. While Coovadia’s own family was in the business of manufacturing, his “deep and abiding distrust of raw capitalism” saw him decide on medicine.

“The Durban medical school was actually just down the road from where we lived, which was convenient for me,” recalls Coovadia. “I felt a little suffocated though. I thought I’d like to be a little freer, live my own life, et cetera. So I asked my parents, and they had relatives in Bombay (now Mumbai), one of my aunts, whose husband was an advocate. So I stayed in Bombay until I qualified to become a doctor. What an eye-opening experience, what a mad place! It was my political awakening, too.”

Influenced by the Communist Party of India, he grew to espouse the ideals of socialism. Also at this time, he met his wife, a medical student from Piketberg, in the Western Cape.

Later, in the United Kingdom in 1974, Coovadia obtained his MSc in Immunology from the University of Birmingham. Speaking over the telephone, his voice ripples with enthusiasm. “And there’s this fabulous hospital in London called the Great Ormond Street Hospital for Children, where I worked for a year.”

While in the UK, Coovadia met with the likes of Thabo Mbeki and late ANC leader, Oliver Tambo, planting early seeds for his later participation in Codesa [Congress for a Democratic South Africa] negotiations. “For me, this was an occasion. There were very many smart and important people. I will never forget that.”

Back in South Africa, he returned to the (then) University of Natal, where, in 1990, he would become the head of paediatrics and child health, supervising up to 20 doctoral students.

He recalls how they were house friends with Arenstein and his wife, Jackie, a defendant in the 1956 Treason Trial. “Rowley Arenstein, I’d guess, was the most important teacher I ever had. Among the ANC activists with whom [Mangosuthu] Buthelezi mingled at the Arenstein house were Nelson Mandela and Walter Sisulu — who always visited Rowley when they came down to Durban. Rowley taught me about socialism and how scientific it can be. It’s such a different way of thinking, compared to capitalism. I learned a hell of a lot from him. We grew very close to him and his family. What he taught me, stayed with me forever.”

Here Coovadia pauses to ask his wife which year this was, then he speaks into the phone again. “We were in our forties, early forties.”

In 1989, apartheid security police bombed the front of the family’s former house in Overport Durban. Fortunately, nobody was hurt.

Now retired, the scholar’s tone is gentle. His words have a poetic bent, perhaps due to the literature he has devoured since childhood.

In an interview with the Academy of Science of South Africa in 2017, when asked what people don’t know about him, Coovadia responded: “Despite some corroding bourgeois proclivities, I remain at heart and in mind, an adherent of equity and fairness in all things meaningful — justice for the poor and the elimination of poverty.” DM