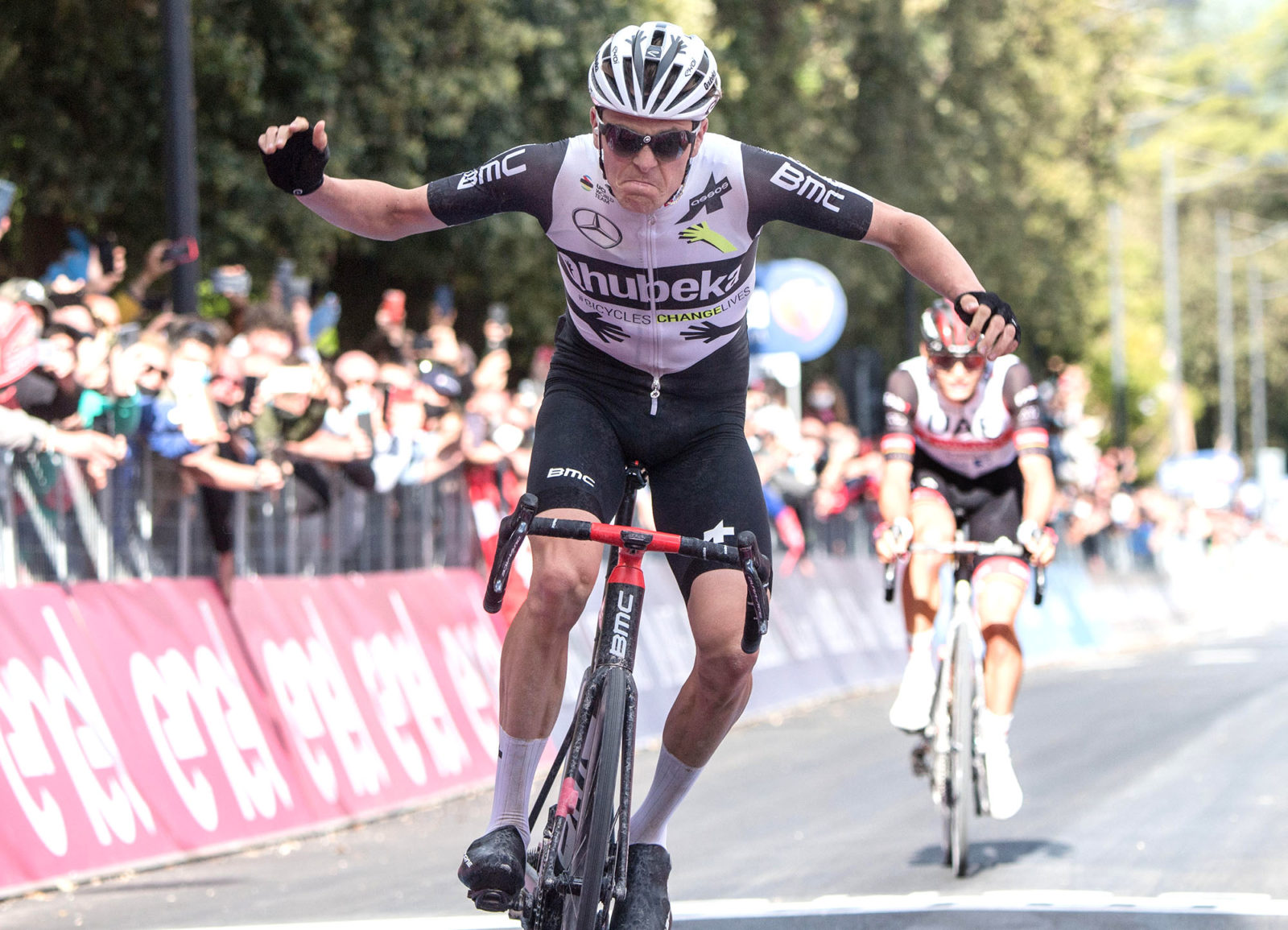 Swiss rider Mauro Schmid of Team Qhubeka Assos on his way to winning the 11th stage of the 2021 Giro d'Italia cycling race over 162km from Perugia to Montalcino, Italy, on 19 May 2021. (Photo: EPA-EFE / LUCA ZENNARO)

A compelling 2021 race ends in Milan on Sunday and for South African Team Qhubeka Assos, it could be a vital turning point – not just for the team itself but for its charitable activities in SA.

In the space of five days during the second week of the 2021 Giro d’Italia, the sport’s second most prestigious Grand Tour, South African-owned Team Qhubeka Assos shocked the cycling world.

Stage 11, 13 and 15 – two hilly and one flat – were won by three different riders from Qhubeka, colloquially known as “Africa’s team”. No other unit had won more than two stages in the race to that point, and from almost nowhere the little team that could was the talk of the cycling world.

Tour de France winner Bradley Wiggins praised the team in his podcast and even the disgraced Lance Armstrong, who now has a popular and insightful cycling podcast, was effusive.

Switzerland’s Mauro Schmid, Italy’s Giacomo Nizzolo and Belgium’s Victor Campenaerts were the riders who won for the cosmopolitan Qhubeka outfit, but it was a massive team effort to deliver them to the line in the position to fight for victory.

“It’s not easy to win stages,” team boss Doug Ryder told DM168 from his base in the Netherlands this week. “Teams such as Jumbo Visma, with much bigger budgets, have battled.

“This year we have been very specific about targets with the riders we have. On some stages we have not fought to get into the breakaways but when we have, we have gone all in.”

To most observers, the Grand Tours of France, Italy and Spain are about the overall winner. But within the peloton, and for sponsors, winning stages – races within the race – are as important.

Qhubeka’s victories couldn’t have come at a better time. The team’s future remains in the balance as they fight to stay alive in an ultra-competitive environment thrown off-kilter by Covid-19.

Battle to balance the books

After losing headline sponsor NTT at the end of 2020, the budget of the team has been slashed. It tries to operate with more modest backing from Swiss cycling apparel manufacturer Assos. “We’re in a better place and the performances are there but we are still sweating bricks because nothing is secured for next year,” Ryder said. “Nobody likes to be part of the struggle bus and success breeds success. But we are in the shop window now and everyone is speaking about us – from Wiggins on his podcast [to] Armstrong … to others in the industry.

“This team almost didn’t exist [at the end of 2020] and I think we’re proof that it’s not all about money, but about passion and commitment, which has been recognised all over the globe. People love a story like this – all the hardships and the fight – because actually the entire world is in a bit of struggle like this at the moment.

“Look, the reality is that keeping a team on the road requires a lot of money. We have almost 100 staff spread across the globe and have 280 race days a year.”

Ryder’s team operates on a fraction of what goes to peloton heavyweights such as Ineos and Jumbo Visma, whose annual budgets are about R800-million. Qhubeka is working on about R100-million this year. They’ll need to triple that, at least, to remain competitive in the future.

Since founding Qhubeka Assos, Ryder’s ultimate dream had been to use the profile and success the team developed on cycling’s global stage to promote its purpose: changing lives through bicycles together with the Qhubeka Charity.

To that end, the team raised funds for more than 30,000 bicycles for distribution to Qhubeka programmes in South Africa.

But the charity component can only survive if the professional team remains competitive on the World Tour, winning races and stages at events such as the Giro d’Italia – and hopefully the Tour de France later this year.

After Campenaerts crossed the line to win stage 15 of the Giro, the European spoke movingly about the spirit of ubuntu – I am because we are – that drives the team.

“I am at my first Grand Tour with another objective and we’ve already had two victories with the team here,” Campenaerts said. “I can’t say that I helped Mauro that much in the break but I helped Nizzolo for his victory and now I helped myself to a big victory – what a day.

“For two years we’ve been speaking about ubuntu in the team, which is about riding as a team … we’re stronger as a team together, and the spirit we have in the Giro is building up to an even greater spirit. Our mission … is to change lives with bicycles and the Qhubeka Charity. These successes mean that we play our part in changing the world.

“I also hope that these victories are great exposure for the team, to keep the team alive for the future. It hasn’t been easy to keep it alive and we needed this, so I am just so happy.”

If there is one thing that is a key to Ryder, himself a former pro cyclist, is that he won’t easily give up. He founded the team in 2007 and spent years building it into a regular World Tour (cycling’s Premier League equivalent) unit.

He knew little about what it took to run a team when he started but, over the years, and through various iterations as title sponsors have changed, one thing has remained constant: a fighting spirit.

Ryder’s team have helped expose African cyclists on the world’s biggest stages. As members of the team, 16 African riders have started Grand Tours, they’ve won seven stages at the Tour de France and celebrated as Eritrean Daniel Teklehaimanot wore the King of the Mountains polka dot jersey in 2015.

There has never been a whiff of a doping scandal and their charity component is unique because they don’t just contribute, but rather partner with Qhubeka.

The Giro has been an unqualified triumph, which will hopefully unlock doors to big sponsors. The team, though, will keep doing what it does best, and fight for wins on the streets of Europe through the northern hemisphere summer.

“We have a World Tour licence for 2022, but it relies on funding to stay alive,” Ryder said. “Finding more finance is our major priority right now. Assos are very happy with the partnership and we’re talking about continuing together.

“There have been many times when I’ve thought of throwing in the towel because there are just so many obstacles in the way. But then when we find a way to continue and see the fan engagement and the support of the sponsors we have, and how the riders and staff react, it makes it all worth it.

“That drives me to get up and try again because we are not just a cycling team. We are a movement for social mobility.” DM168