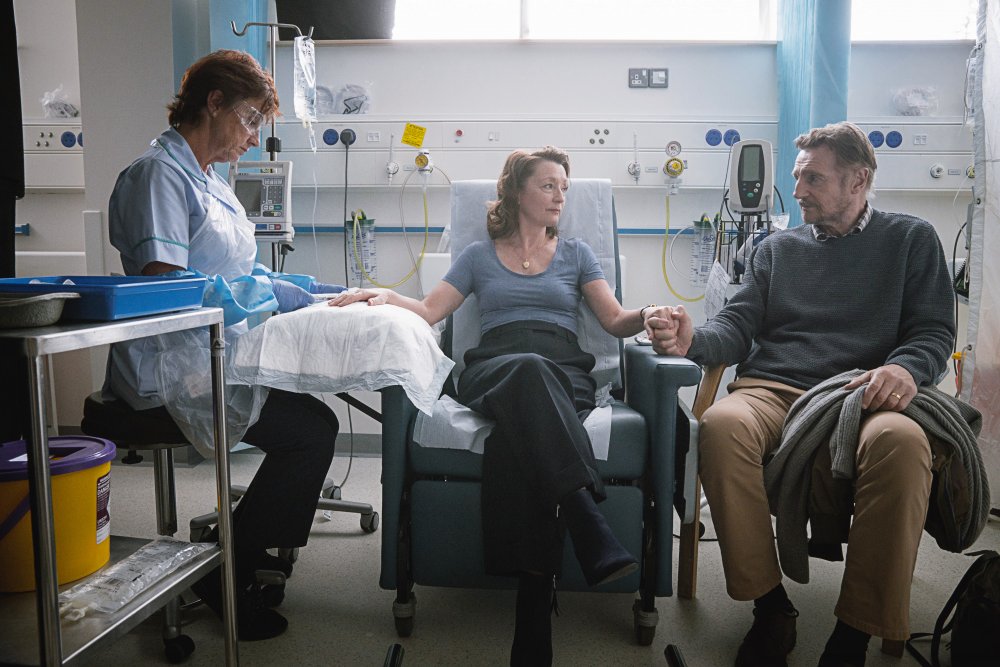 ‘Ordinary Love’ is an exceptionally acted story of a middle-aged Irish couple’s battle with cancer. With its endearing romance, wry dialogue and harsh hyper-realism, it is both sorrowful and uplifting.

Even when you’re losing your hair from chemotherapy and being kept awake by existential dread, you still have to decide how many Brussels sprouts to buy for dinner.

When we imagine a tragic moment of loss or a defining romantic experience in someone else’s life, minor details seem to dwindle into dust, but when we experience these things ourselves, often the smallest things make the largest impact in our memories.

The directors of Ordinary Love, Lisa Barros D’Sa and Glenn Leyburn, revere day-to-day acts of companionship that are seldom even recognised as being romantic. The film follows a turbulent year in the loving relationship between Tom (Liam Neeson) and Joan (Lesley Manville) that begins just before Joan discovers she has breast cancer.

The screenplay was written by Owen McCafferty, who was inspired by his own wife’s struggle with breast cancer. McCafferty’s insight into how mundane interactions mash into the momentous ones, adds depth and sincerity to the dialogue.

When Joan’s doctor describes her lump as a three out of five, where one is certainly benign and five is certainly cancerous, a serious conversation between Tom and Joan about whether they should be concerned devolves into a hilariously frivolous debate on whether three is closer to five or one. McCafferty apparently had this discussion word for word with his wife during her early diagnosis.

Ordinary Love is defined by this wry, organic brand of dialogue – simultaneously profound and inconsequential, and as a consequence, somewhat satirical. Tom and Joan’s playful squabbling and witty banter punctuates the inevitably heavy nature of any story about cancer.

The film opens with the nostalgic voice of Billie Holiday singing I’ve got my love to keep me warm, already setting up the idea of the strength of selfless, interdependent love. We meet Tom and Joan as an unassuming couple walking side by side in profile along a frosty, picturesque highway. The sentiments of the song are echoed by this frequently repeated camera shot – the cars whooshing past, the sky overcast and dreary as this mild duo walk closely together, gleefully teasing one another.

D’Sa and Leyburn make certain that you’re sufficiently in love with their familiarity and delightful Irish accents before tragedy hits, to ensure maximum heartbreak. “It’s not the news we were hoping for,” the doctor says apologetically.

One of the several ways to interpret the title, Ordinary Love, is that it makes a point about the indiscriminate nature of cancer. It can and does happen to anyone. Often there will be camera pans of Tom and Joan’s tidy minimalist home just before a shocking scene involving Joan’s cancer, to emphasise this point.

When Joan asks her doctor “is that normal?” she is searching for reassurance – normality represents safety and certainty – but rather than giving her a straight answer, the doctor replies: “There is no normal here.” McCafferty’s experience with hospitals informs his portrayal of the torturous suspense of waiting for answers in limbo.

After Joan has been diagnosed, the pace actually slows. The anxious anticipation is breached, giving way to a wearying journey. D’Sa and Leyburn are so committed to their realism that the film feels a little uneventful, but this also makes it immersive and impossible to turn away from.

The normal is aggrandised, but not robbed of its character. Tracksuit pants, soup, family portraits, the commute to work, little theoretical stream of consciousness arguments about nothing in particular. These are the textures of real life upon which everything else is built and they are sometimes more important than we realise. Arguments and romantic moments evolve out of these commonplace details.

Tom and Joan both try to support each other by hiding how frightened they are. Their differing strategies of processing their grief and fear are fascinating. When Tom visits the grave of their deceased daughter, Joan tells him to send her love, but not to mention the cancer. Tom is irritated by the silliness of “talking to a bit of stone” so he does mention the cancer, just because he can. Adorably oblivious to the irony, he lands up venting to his daughter’s grave about Joan’s treatment and his feelings.

Joan and Tom “anthropomorphise” their late daughter to comfort themselves, but in opposite ways. Joan draws strength from pretending that she’s shielding her daughter from the harsh truth, while Tom uses her as an excuse to open up to himself about what he’s going through.

It doesn’t take long before the stress of Joan’s disease puts strain on their relationship and they begin arguing more seriously. Tom and Joan are not a perfect, unfaltering unit, they’re more real than that, and they go through the same symptoms of immense fear and uncertainty as any couple would.

The chemistry between Neeson and Manville is startling. Without the familiar brooding and brawling we’ve come to associate with Neeson, it’s easy to appreciate his effortless underplayed charm and Irish stoicism, but Manville truly steals the show.

Manville’s performance captures the swirling of 100 delicate emotions. She feigns a nonchalance to act like she’s not nervous about her surgery, but her feigned smile dips faintly when Tom leaves the room in a way that subtly conveys anxiety.

With little more than body language, she expresses resentment for Tom for not having to go through what she is going through, but also appreciation of his support, and therefore frustration with herself for being angry with him. Such poised, multifaceted acting is a pleasure to watch.

Ordinary Love joins a growing niche of films that seek out beauty and magic in the unremarkable. Its minimalist cinematography reflects this aspiration, creating visually appealing scenes with stock-standard subject matter.

It retains its modest sensibility throughout, in spite of an overly cautious score which seems to suggest that almost every moment is supposed to be touching. After all the tears have been shed and the love laid bare, one is left feeling gently uplifted, and maybe a little more appreciative of everyday life and everyday love. DM/ML

Ordinary Love is available in South Africa on Showmax from May 27.
You can contact This Weekend We’re Watching via [email protected]