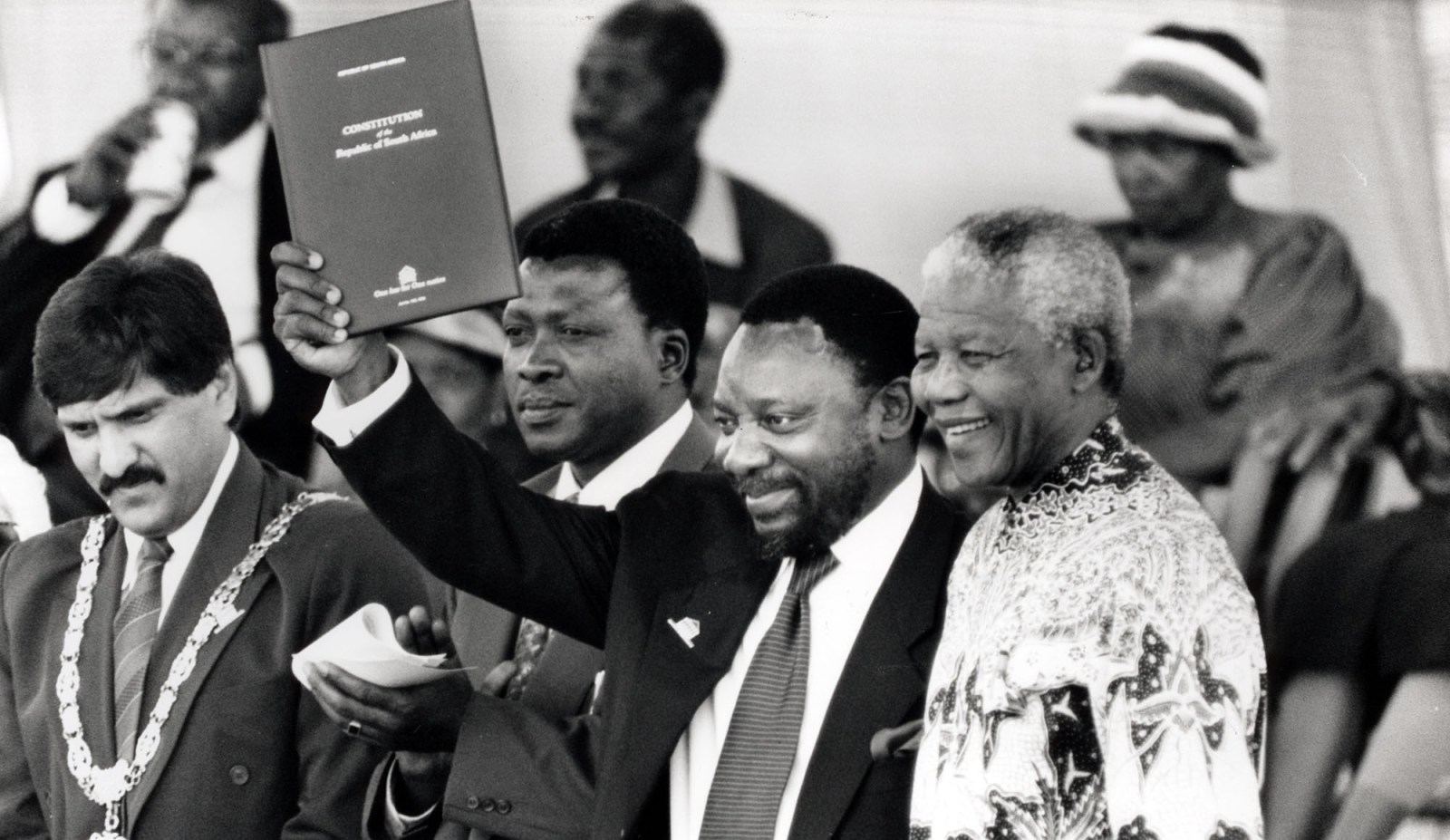 Platitudes, politicking and doses of disparagement. If it wasn’t for Justice Minister Ronald Lamola and United Democratic Movement leader Bantu Holomisa’s efforts, Friday’s joint sitting debate on 25 years of South Africa’s Constitution would have been a complete washout.

South Africa’s Constitution provided and continues to provide a “sound basis” to rebuild the country after apartheid as a “wonderful example of what’s possible”, according to United Democratic Movement (UDM) leader Bantu Holomisa.

But over the past 25 years, South Africa’s supreme law has been stress tested. While the Bill of Rights should have been implemented and protected by government, instead “the comrades in corruption chose to write a new chapter, Corruption”.

Sending comrades to State-owned Entities (SOEs) and using tenders had become a “neat fundraising trick”, according to Holomisa.

This was a clear, but still nuanced approach to draw a distinction between the supreme law as adopted on 8 May 1996 in Parliament — after a high-energy, often tense two-year process to capture newly democratic South Africa’s aspirations – and what has happened in practice since.

Much of the rest of the just over two-hour debate that brought together both Houses of Parliament in a joint sitting was little more than electioneering ahead of the 27 October local government elections and, on the one hand, government bashing, or, on the other, praising the governing ANC’s track-record.

Justice Minister Ronald Lamola in closing the debate tried to refocus on the Constitution, and human rights — and called on everyone to join in building a nation.

The Constitution was “not an election manifesto”, but inclusive — and this debate was about the Constitution, not elections, about what can be done, and substance and South Africa’s people.

“All of us have a responsibility to build our country,” said Lamola.  But ultimately it was on the ANC terms.

“It is the blood of ANC heroes that lead us to this. It is not peacetime revolutionaries like the EFF that speak in military and violent way to divide the nation.”

It was an awkward debate.

Discomfort must arise from the historical revisionism of both the IFP and African Christian Democratic Party (ACDP) that these days talk positively about the Constitution. But the IFP had walked out of the constitution-making by March 1995 and was not in the House when the Constitution was adopted on 8 May 1996. The ACDP actually voted against the supreme law.

Support for Biblical law was the reason then, and while in Friday’s debate ACOP MP Maxim Thring continued with Bible fundamentalism — “Pornography is the theory, rape is the result —  the party now appreciated the Constitution and how it sought to address past injustices. “There ware many positives we can draw from in our constitution.”

IFP MP and president emeritus of the IFP, Mangosuthu Buthelezi on Friday warmly spoke of the Constitution of which his party was “rightly proud” and claimed it included “many of the IFPs victories”.

Some MPs like DA Chief Whip Natasha Mazzone indicated their youth in 1996 when the Constitution was adopted. But that did not mean the supreme law was not a forward-thinking “beautiful” document.

“We simply cannot have high ranking politicians making public statements that the Constitution will be ignored or is not going to be considered, or even more worryingly, will not affect their course of action.”

But dissing the Constitution was central to the EFF speakers. The 25th anniversary of the Constitution had nothing to celebrate as, in the increasingly race-identity language of that party, the “colonial invaders” were still in charge.

EFF MP Veronica Mente said the Constitution tried to be everything to all people, but actually abandoned the “dispossessed majority” and left the persecuted to live with the persecutor without redress.

“The fight was not for some vague guarantee of equality in the Constitution when still today black people live in rat-infested and flea-ridden shacks, while their colonisers live like kings in their land.”

ANC speaker after ANC speaker claimed the Constitution as a product of the governing party’s historical roots beyond all the way to the Freedom Charter.

Several governing party speakers like ANC MP Richard Dyantyi described the Constitution as a “milestone” and “compact” to live in a non-divisible state with an independent judiciary and free media.

“The ANC has been faithful to this pact throughout these 25 years,” he said before launching into a list of achievements from the sustained economic growth of the first 15 years of democratic South Africa to houses built, to vaccinations against measles and TB achieved.

And as the ANC acknowledged limitations and challenges, it was ready to address these. “For the ANC there’s no contradiction of building a united society while pursuing a radical transformation,” said Dyantyi, later adding: “We are poised for acceleration on many front”.

Maybe it was never going to be a good idea to have a qualitative debate on 25 years of the Constitution in an election year.

Like DA MP Zakhele Mbhele’s call to get on the “blue DA bus” and vote for change, DA MP Michael Cardo bluntly touted the upcoming municipal poll. “It is time for change. Roll on the 27 of October.”

Politicians should be sent back to the classroom. No one-upmanship exists in the Constitution.

“We the people of South Africa recognise the injustices of our past…” says the preamble, saying the Constitution was adopted so that “we” through freely elected public representatives: