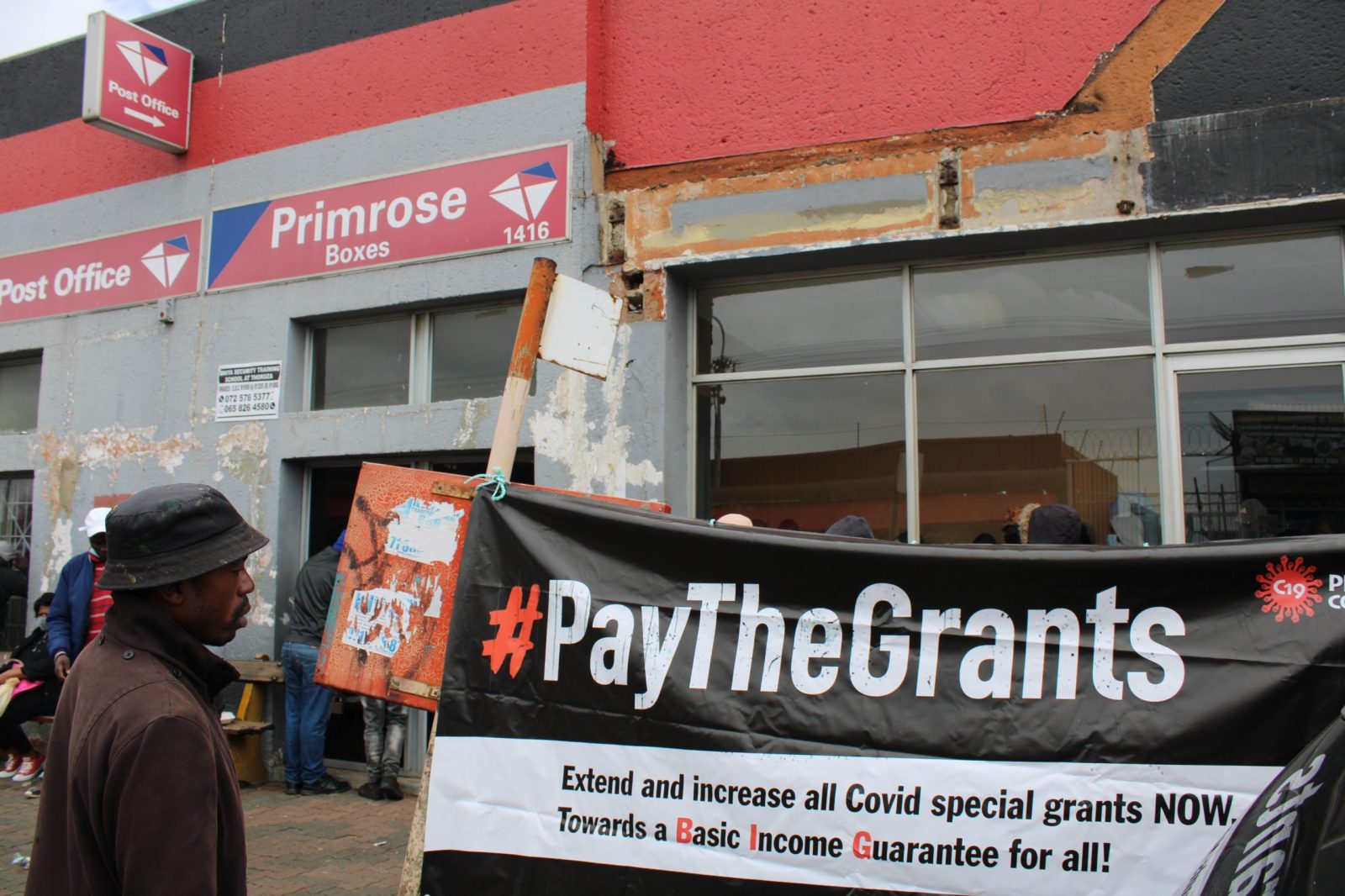 The Covid-19 Social Relief of Distress Grant came to an end in April, but activists are calling for it to be extended. (Archive photo: Masego Mafata)

Silence is proving to be anything but golden for organisations battling to secure meetings with state departments over Social Relief of Distress Grant.

Activist organisations are battling to secure meetings with the government to discuss the termination of the Covid-19 Social Relief of Distress Grant.

The R350-a-month grant was terminated on Friday 30 April 2021, and no new applications will be processed. Members of the #PayTheGrants campaign have called on the government to extend the grant, on which more than six million people depended.

In a joint statement, the Black Sash, #PayTheGrants, the Institute for Economic Justice (IEJ) and The Studies in Poverty and Inequality Institute (SPII) said the termination of the support grant “in the middle of an economic and deepening health crisis, goes against government’s constitutional mandate and is a political decision to reverse social protection.”

“Income support for millions of destitute people has been cut off, leaving them to face a Covid-19 third wave without any means to afford food and other basic necessities.” There is no justification for terminating the Covid-19 grant, the groups said.

In the latest National Income Dynamics Study — Coronavirus Rapid Mobile Survey (Nids-Cram), researchers found that 67% of households had run out of money to buy food in the previous month in at least one of the four Nids-Cram surveys.

Child hunger was reported in nearly one-third of households.

The survey also showed that women were the hardest hit by the Covid-19 lockdown, and are recovering jobs at a slower pace than men.

“If the Covid-19 grant is not reinstated, government must urgently clarify what it intends to put in its place for those aged 18 to 59 years who are excluded from social security programmes,” the joint statement said.

But the organisations endorsing the #PayTheGrants campaign say they have yet to receive a response to written requests to the Presidency, the South African Social Security Agency (Sassa), the Ministry of Social Development and the National Treasury to discuss the extension of the grant.

Esley Philander of the Black Sash said letters of request to meet were sent to government in January, February and April 2021, but to no avail. Their most recent open letter (22 April 2021) was endorsed by 86 civil society organisations.

“While the Acting Director-General of the Department of Social Development indicated that a meeting would be scheduled, despite a follow up to secure a date for the meeting, we have yet to receive a response.

“We fail to understand why key government departments continue to ignore our requests. Given our current unprecedented health, economic and humanitarian crisis, government should make every effort to meet with civil society partners,” said Philander.

Sassa national spokesperson Paseka Letsatsi confirmed to GroundUp that the agency had received the open letter. But several of the demands did not fall within Sassa’s responsibilities, Letsatsi said.

“The issues raised such as extending the Covid-19 grant are policy matters above the mandate of Sassa.”

GroundUp also contacted the Department of Social Development, the National Treasury and the Presidency for comment but did not receive a response. DM