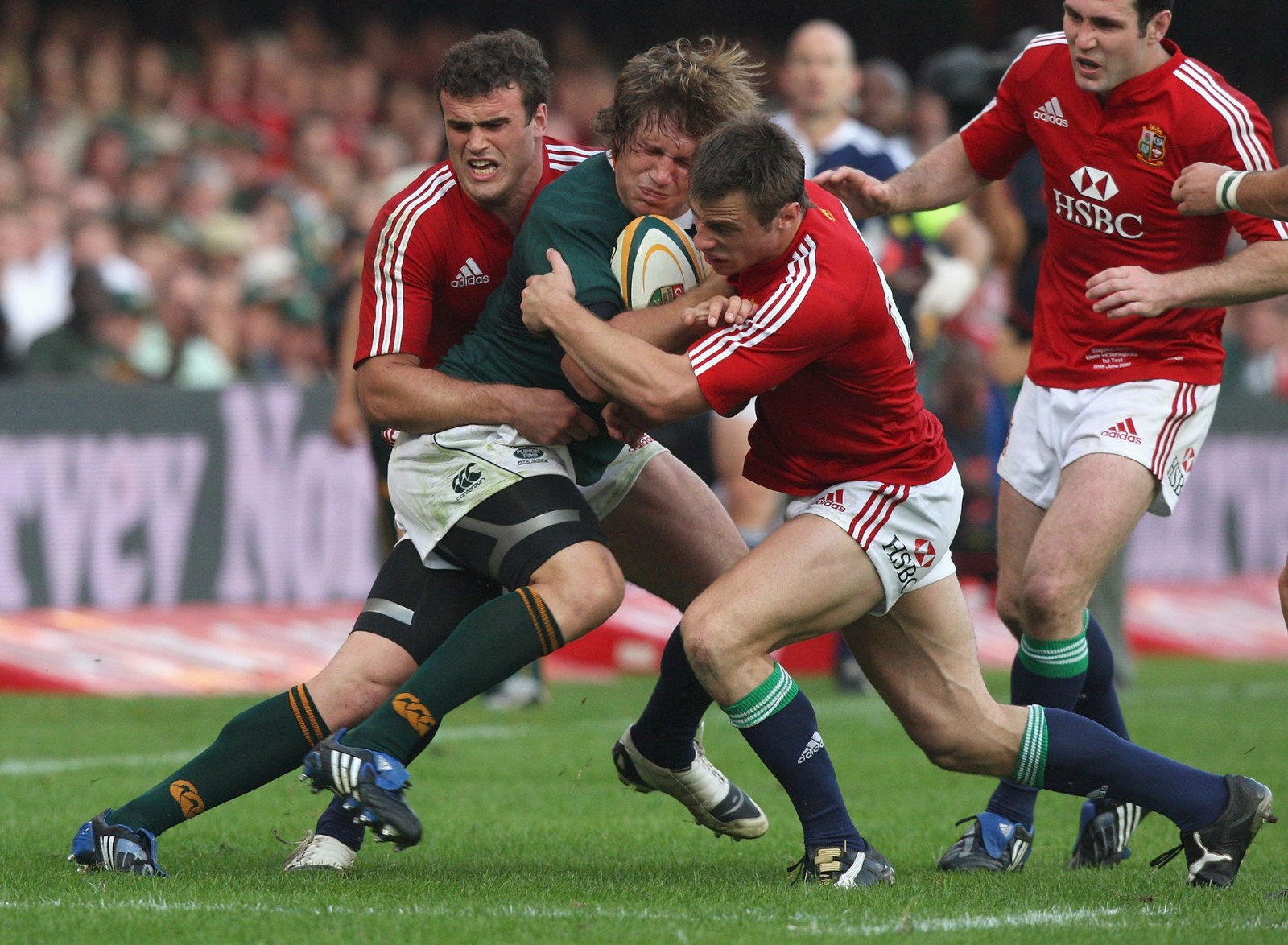 Frans Steyn of the Springboks is tackled by Jamie Roberts and Tommy Bowe during the first Test against the British & Irish Lions at Kings Park Stadium in June 2009. The Lions only tour South Africa every 12 years, and although their eight-match campaign in 2021 will be played behind closed doors, the broadcast revenue of about R500-million is vital to SA Rugby’s existence as a going concern. (Photo by David Rogers/Getty Images)

The Springbok squad will be vaccinated against Covid-19 in time for a bumper international season, which will strengthen the integrity of the biosecure bubble they’re soon to enter.

The non-rugby-related final pieces are falling into place for the Springboks for their 14-Test 2021 season, which starts against Georgia in five weeks.

Director of Rugby Rassie Erasmus confirmed at a media briefing that members of the squad and management, as well as support staff, have started receiving Covid-19 vaccinations.

The entire squad of 45 players and management, as well as provincial squads, who are set to play against the touring British & Irish Lions in non-Test matches, are also expected to receive jabs.

“The Springbok squad and wider group that will be involved have either been vaccinated already, or will be vaccinated in the coming days,” Erasmus said.

Immunising squads against the vaccine will greatly reduce the likelihood of a Covid-19 breakout during the season, but most vitally for the Lions tour, which is the major earner this season.

The Lions only tour South Africa every 12 years, and although their eight-match campaign, which includes three Tests, will be played behind closed doors, the broadcast revenue of about R500-million is vital to SA Rugby’s existence as a going concern.

Head of the South African Medical Research Council (SAMRC), Professor Glenda Gray, confirmed that her organisation had been approached by various sporting authorities.

The Olympic team is already one week into its vaccination roll-out programme, with the rugby players and Proteas cricket team, which is due to tour the West Indies next month, currently in line.

Gray also confirmed that the Pfizer vaccine had originally been earmarked for athletes, but that view changed because it requires two doses several weeks apart.

Athletes have instead been receiving the Johnson & Johnson version from the Sisonke study, originally intended for healthcare workers. It only requires one dose, making it more practical given the urgency and time frames around the Olympics and international rugby and cricket tours.

“By receiving the Sisonke vaccine, the Pfizer doses allocated to them will go to ordinary citizens of our country and thus will free up additional doses for our country,” Gray said, adding that all conditions for registration of the J&J vaccine will be observed for the vaccinated athletes.

Professor Linda Gail Bekker, co-national principal investigator, added: “At the end of the day these individuals are ambassadors for our country; they have to travel to do their jobs and they need to be vaccinated. We are glad we could assist.”

Erasmus was grateful that the Boks had cleared one more hurdle to staging a successful Lions tour, but said that as far as he was aware it might not be compulsory for players to have the vaccine.

“Having the British & Irish Lions, who are being vaccinated, coming here and going into a hard bubble with us, the safest thing would be for everyone to be vaccinated,” he said.

“We want to protect ourselves [and] them and also ensure that the series goes ahead. I’m not 100% sure if it is a requirement that players are vaccinated, but it would help before the bubble.”

With both the Bok and Lions squads scheduled to be accommodated in one venue for the duration of the tour, it would make sense to secure it as much as possible. That means having everyone in what is known as the Red Zone (interaction between squads and immediate hotel and other staff) immunised as far as possible.

“The first reason this is a good move is that the biosecure environment becomes, well, more biosecure,” Proteas doctor Shuaib Manjra told Daily Maverick recently. “Those athletes would have ‘herd immunity’ and it would be a group of people less likely to transmit or contract the virus.

“It would not eliminate the risk of infection completely, but it would reduce it massively. There is a high percentage of efficacy with vaccines, even though it’s not 100% effective.

“But within a cohort of players who are vaccinated, it would allow us, as medical authorities, to be more liberal in terms of what we permit the players to do in that biosecure environment.

“The second benefit to athletes being vaccinated is how it would ease problems around international travel. England, for example, is lifting travel restrictions on people who have been vaccinated, and other countries are reducing the quarantine restrictions on those who have had the shot. It makes the logistics of managing a biosecure environment a lot easier.”

No Springbok players or squad members have publicly declined the vaccination, but England international Henry Slade, who missed out on Lions selection, has refused. Slade is also a diabetic.

In an interview with Britain’s Telegraph, Slade said: “I am not going to have a vaccine. I don’t agree with it at all. I don’t think you can trust it, can you? I don’t think it [vaccination against Covid] has been going long. There is no way of knowing what could happen with it in the future. I am perfectly fit and healthy.”

Erasmus and Bok coach Jacques Nienaber also confirmed that they would name a 45-man squad on 5 June for the two Tests against Georgia and the series against the Lions.

The South African “A” squad, which plays against the Lions as one of their touring matches, will also come from that group of players, and will be coached by the Bok management.

“There are definitely a few young guns who are in the mix along with the older or more familiar guys. There is wonderful talent available to us, and many have been playing top-level rugby overseas. So that’s been very encouraging,” Erasmus said.

Although the coaches were diplomatic in responses about choosing the best players, the reality is that when it comes to facing the Lions, the bulk of the squad that won Rugby World Cup 2019 will do duty.

Many of those players are performing at a high level for clubs in Europe and while there might be a couple of bolters in the wider group, the core remains established.

“A guy like Salmaan [Moerat, Stormers lock], who was doing really well and we were excited about that, but unfortunately it’s now touch and go whether he will be available due to injury,” Erasmus said. “Similarly, Sikhumbuzo Notshe [Sharks No 8] was just putting a marker down, but then got injured.

“What I would say is that we are very fortunate to have players who’ve been in action all over the world. We’ve been quite restricted in South Africa in terms of international rugby [the Bulls, Stormers, Sharks and Lions were unable to compete in the overseas leg of the Rainbow Cup], and we couldn’t take part in the Rugby Championship last year.

“So, the local players have been playing a lot against each other, and then there are many others who have been getting exposure overseas.

“There’s someone like Jasper Wiese, I’ll mention him, because he’s been playing very well for Leicester Tigers. Then we’ve seen guys like Rynhardt Elstadt and Cheslin Kolbe winning the Champions Cup with Toulouse.

“We’ve had lots of players doing well in the Premiership, and a guy like Damian de Allende in very good form in the Pro14. This has been really beneficial for us along with the local boys who have been getting a lot of rugby under the belt.” DM