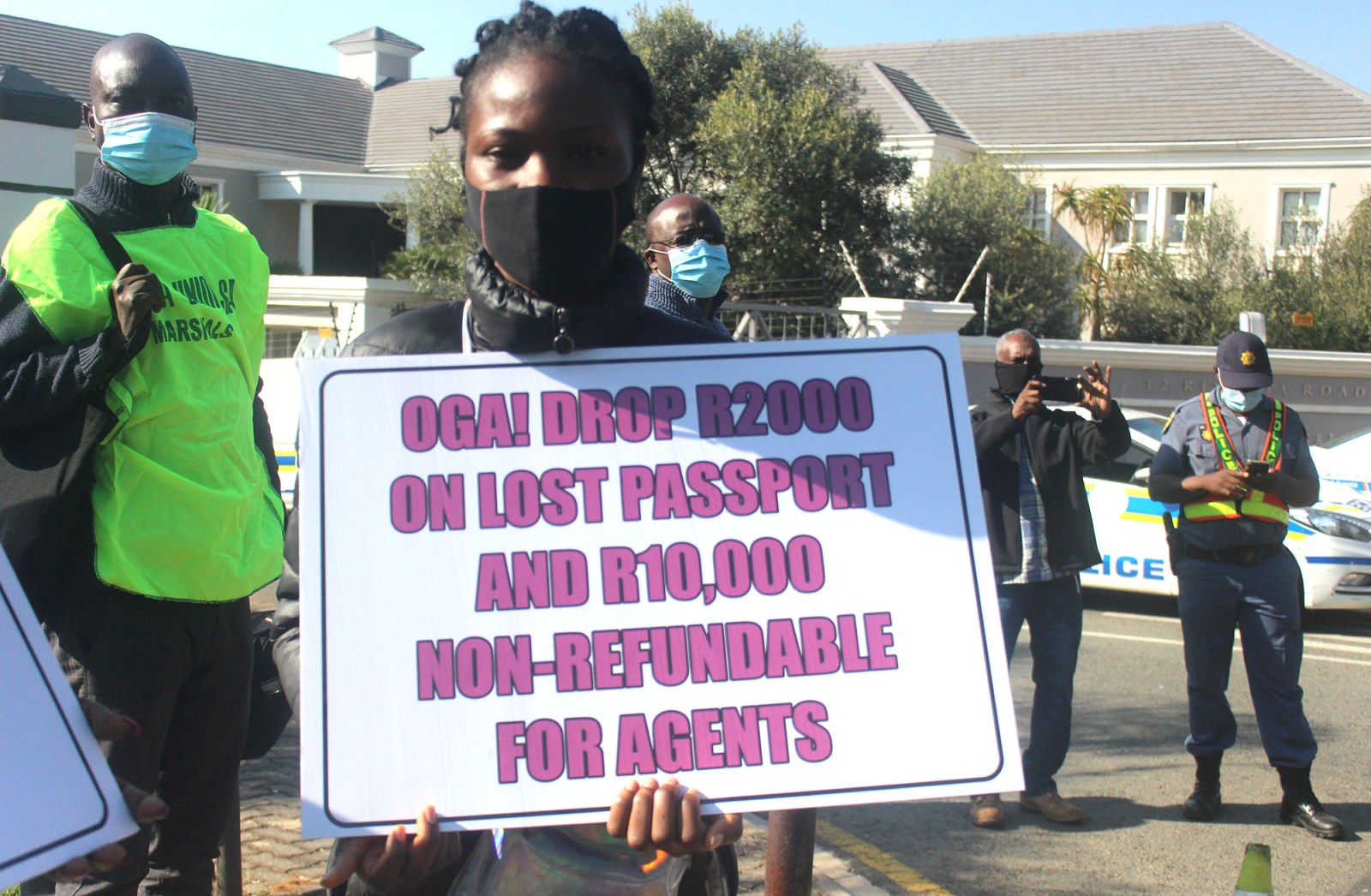 Protesters at the gate of the Nigerian Consulate General in Johannesburg. (Photo: Patrick Egwu)

Nigerians living in South Africa have staged a peaceful protest over ‘illegal’ passport charges, ‘extortion’, and poor consular services at the Nigerian Consulate General in Johannesburg.

About 100 Nigerians living in South Africa have demanded the immediate reversal of what they described as “diplomatic extortion” by the Consul General, Abdulmalik Ahmed, who took office in October 2020.

The protesters, led by the Nigeria Union in SA, want the immediate removal of the fee of R2,000 for lost passports, increased from R1,500, and the newly introduced “extra admin charges” of R120 for data capturing, despite the payment of the recognised application fee.

In addition, the protesters asked that the turnaround time for passport applications, renewal and replacement should not be more than one month as delays make corruption inevitable for desperate applicants.

The union’s leader, Adetola Olubajo, said at Wednesday’s protest that it was insensitive that “illegal” fees and extra charges were introduced when the Covid-19 pandemic had disrupted livelihoods.

The protesters want the mission to disallow touts and other agents from operating as applicants had to pay double the official amount when applying through such agents.

The union says Ahmed has introduced a R10,000 non-refundable deposit to legitimise the services of passport touts and agents, which causes these agents to raise their fees. This, Olubajo says, is tantamount to demanding kickbacks from agents. Online Integrated Solutions is said to be the only government-approved agency that processes visas and passports for Nigerians in South Africa, for a fee of R50.

Olubajo says they have tried to engage with the Consul General a number of times, including meeting on 22 May for the new charges to be reversed, but their appeals were rebuffed.

At 9am, dozens of protesters gathered in front of the Consul General’s office. Members of the South African Police Service and diplomatic police units were stationed at the premises, preventing them from accessing the compound. But as their numbers increased and tensions rose, the protesters forced their way through the police barricade to gain entrance. They chanted and marched to the main gate, where they were faced with another team of police officers who locked the gate and prevented them from gaining entrance.

On 23 May, the Consulate General’s office issued a statement on the planned protest, calling the demonstration “a vicious campaign to distract and sabotage the mission”. It asked Nigerians living in South Africa to resist the invitation to protest because doing so would “amount to biting your nose to spite your face”, which would paint Nigerians in a “bad light or dampen our collective reputation”.

The statement, signed by Ahmed, said the office had “taken it in good faith and has rededicated itself to serve all Nigerians”.

“The issue of admin fees for all consular services has been approved by the government and not limited to passports alone,” the statement said.

The mission said the penalty for lost passports, which was instituted to check abuses and immigration violations, is not peculiar to the mission in Johannesburg.

On the R10,000 deposit to allow passport touts and agents to operate, Ahmed claimed it was to streamline their activities for accountability.

However, the mission said it had begun consultations with “well-meaning Nigerians with a view to addressing some of the issues within the capacity of the mission to do so”.

“The mission is resolved to enhance service delivery, grant equal access to all Nigerians and would not rest on its laurels,” he said.

Ahmed said the mission has resolved to “deal decisively with any official or agent caught in the acts of illegal requests for payment for express services, manipulation or interference in the schedule for applicants’ data capturing and production”.

Protesters were not appeased. Olubajo said they would continue their protests if their demands were not met by the end of May. DM