After 10 years (and a staring match with the judge) Zuma finally enters his plea on corruption charges: ‘Not guilty’ 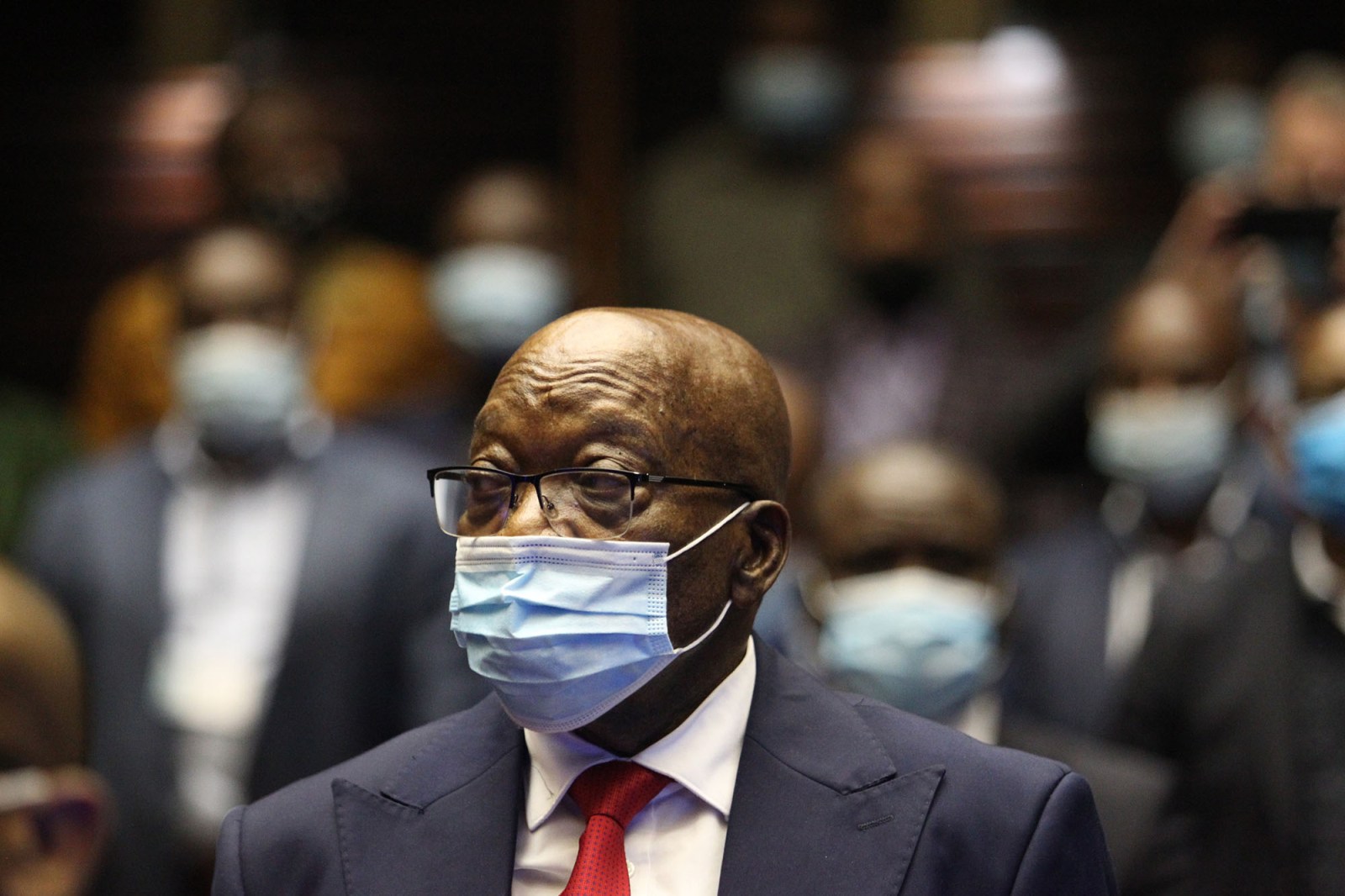 More than a decade after former president Jacob Zuma was served with an indictment accusing him of fraud and corruption, he was finally able to enter a plea at the Pietermaritzburg High Court on Wednesday.

The National Prosecuting Authority’s advocate, Billy Downer, who has been part of the prosecuting team since the matter first landed in court, also finally had the opportunity to read the indictment, initially served on Zuma in December 2007, into the court record.

The entire process took about 30 minutes.

“The State is ready to put the indictment to the accused,” said Downer.

“This authorises me to put the charges before the accused,” said Downer.

He then read nearly word for word the indictment against Zuma and Thales South Africa into the record.

“Mr Zuma, could I ask you to stand please,” requested Judge Piet Koen.

“You have followed the charges that have been put to you in the indictment, am I correct?” asked Koen.

“And no doubt in consultation with your legal representatives you understand what they entail?” asked Koen.

“How do you plead to them?”

“I plead not guilty.”

Zuma pulled his mask below his chin and gave Koen a hard stare.

There was a brief moment of silence as stares were exchanged – eventually broken by Koen.

“Thank you. You may be seated.”

Represented by Dali Mpofu SC, Zuma had Mpofu read into the record his not-guilty plea on each of the counts – fraud, racketeering, money laundering and tax fraud. On each count Mpofu read the words: “I [Zuma] reserve my right to not disclose the basis of my defence at this stage.”

What was essentially basic housekeeping in any criminal matter will be viewed as a massive milestone in the State’s case against the former president, which has been in the making since 27 December 2007. It was preceded by the criminal case against Zuma’s former financial adviser, Schabir Shaik, in which Zuma was implicated. Shaik was convicted in 2005.

The plea of not guilty nearly overshadowed the special plea Zuma submitted to the court last week to have Downer removed as prosecutor. It was dealt with briefly before Zuma pleaded not guilty and the case was postponed to 19 July for argument.

Zuma’s legal team used the court time available to read into the record a summary of the special plea, largely for the benefit of Zuma’s supporters. The special plea states that the trial is based on political interference, foreign intelligence agency meddling and the National Prosecuting Authority – Downer in particular – conspiring with the media.

Also acting for Zuma, Thabani Masuku SC said it was important that Zuma’s plea be read into the record for the benefit of his supporters.

“This is a very important event for the accused not to just tell you, but to tell the public what has happened to him. It is important that the accused person is able to be given the moment he needs to explain… for the public.

“The most important thing [to be stated] is that the complaint about the unfair trial, rights, intelligence and political interference because as a political leader he has a significant constituency of people who must understand why he is here, why he believes he is here,” said Masuku.

Mpofu focused on Downer’s participation in a court action brought by the Democratic Alliance as well as his discussions with investigative journalist Sam Sole, while Masuku aired concern over the alleged involvement of foreign intelligence agencies in the NPA.

In Zuma’s special plea he has asked that Downer be removed as prosecutor, claiming his involvement violates Zuma’s right to a fair trial.

Zuma states the “facts and circumstances” show that Downer “lacks the independence and impartiality that is necessary for a lawful prosecution”.

“Mr Downer has played a role that makes him an essential witness on the issue of whether there was political interference, the nature of which violates my fair trial rights”.

Zuma cited the example of when Downer filed an affidavit in support of the DA’s application to review and set aside the decision by Mpshe in April 2009 to terminate Zuma’s prosecution on allegations of political interference.

The DA eventually had that decision overturned on 29 April 2016, which was upheld by the Supreme Court of Appeal on 13 October 2017. These two rulings paved the way for the NPA to prosecute Zuma once again.

Zuma has further placed in his plea that he would want to be acquitted on the basis “that no fair trial may be conducted under the circumstances set out in the plea explanation”.

One could almost be forgiven for forgetting that the representative for accused No 2, Thales South Africa, was present in the form of senior executive Pierre-Marie Durand. He too pleaded not guilty.

Thales’ defence team, led by Barry Roux SC, then read into the record a brief summary of Thales’ view on each count being faced by the company.

This was undertaken by Roux’s support, advocate Samantha Jackson. She took the opportunity to distance the multinational from any of the corrupt acts between Zuma and Shaik.

Zuma is accused of receiving 791 payments worth R4.1-million between 1995 and 2004 from Shaik and his companies, to protect Thales from investigation in relation to the 1999 Arms Deal.

Jackson, who denied all charges against Thales, explained that business dealing between Thales International and Shaik’s company Nkobi Holdings were above board, and were about pursuing “business opportunities with local entities” with the right BEE credentials. Any transactions between the two were done in the normal course of business.

“It is denied that [Thales SA] entered into an alleged [corrupt] agreement [with Shaik to pay a bribe to Zuma],” said Jackson.

Outside the court precinct, a massive stage with two large banners in ANC colours minus the emblem had been erected.

The banners contained six images of Zuma with a microphone in one hand and another raised above his head. The slogan? #HandsOffMsholozi – 100% behind Msholozi.

In the run-up to the plea, his supporters preached that Zuma’s prosecution was part of a wide-reaching conspiracy involving foreign intelligence agencies such as the CIA, that Zuma was being targeted because of his views on expropriation without compensation, or his views on radical economic transformation, that there was clear political interference, that “white monopoly capital” was to blame, and that that the judiciary was compromised. DM