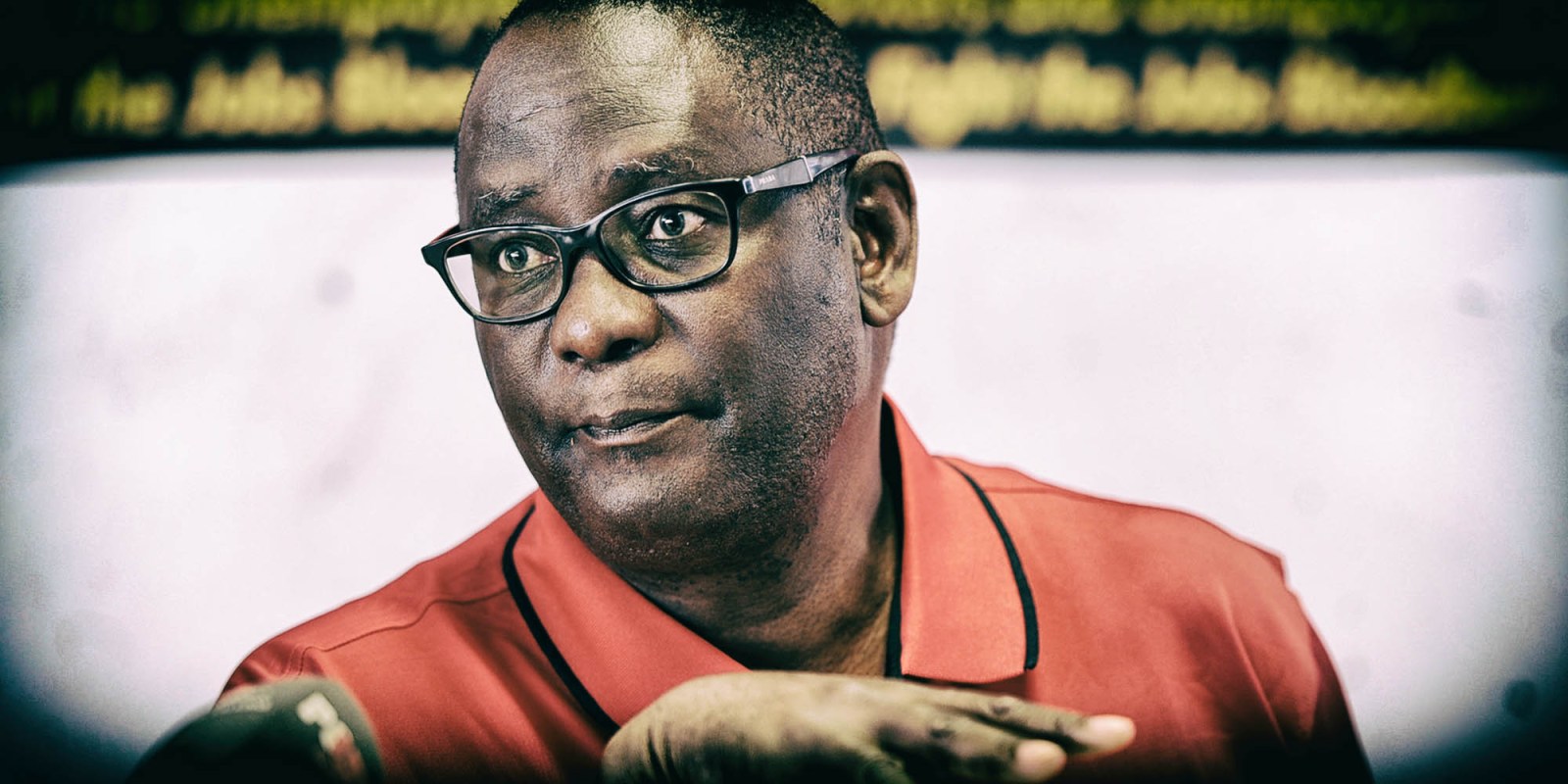 Families will continue to lose their loved ones and mourn, because their government was hesitant to procure early and respected the power of Big Pharma crony-capitalism instead of fighting it tooth and nail.

Zwelinzima Vavi is the general secretary of Saftu

The South African Federation of Trade Unions (Saftu) is worried about the snail-paced vaccine roll-out. The government will not meet the target in the roll-out plan, to inoculate more than 40 million — two-thirds of our population — by the end of the year.

In total, the government reports that only 647,983 people had been vaccinated by late May, a scandalously low rate. And these figures must be taken with a pinch of salt, given that the departments in various provinces want to advance the propaganda that the vaccine is rolling out smoothly.

But currently, with these numbers, the average is 6,821 per day. At this rate, it will take approximately 16 years and 16 days to obtain herd immunity. Even if we were to administer an average of 50,000 complete doses a day, it will take us two years, two months, and eight days to reach herd immunity. Doubling this to 100,000 complete doses per day, will still take one year, one month and four days. This means, even at this rate, which is unlikely, the government will not meet the vaccine roll-out target.

To put this shameful record into perspective, the low average daily vaccine rate is at the level of the world’s lowest roll-out competence, in spite of our fatalities of more than 150,000 (with excess deaths), considered the fifth-highest per capita rate on earth. 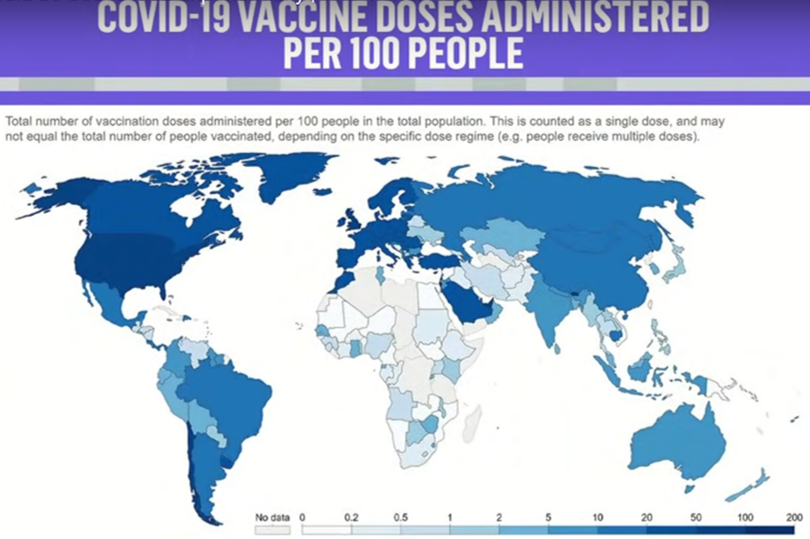 Noting the combination of factors above, how will the government get closer to meeting the target in the vaccine roll-out, given that corruption is running rampant? The Special Investigating Unit has estimated that up to R2-billion was lost due to irregular expenditure on personal protective equipment in Gauteng alone last year.

In a report published on Sunday, it appears that close associates of Health Minister Zweli Mkhize pocketed R90-million in suspicious payments from a R150-million Covid-19 communications fund.

These factors present a grim trajectory for the vaccine roll-out. Especially with the third wave now apparent, South Africans are facing doom and gloom. Families will continue to lose their loved ones and mourn, because their government was hesitant to procure early and respected the power of Big Pharma crony-capitalism instead of fighting it tooth and nail.

The lack of a serious commitment to fighting the pandemic within the South African elite means that our own citizens — and the peoples of the world — will not gain herd immunity on the schedule required to solve this crisis. And as ever, it is the working class of the poorer and most unequal countries — of which South Africa still ranks worst — who will suffer the most.

The rich can easily ride out the storm and finagle their way to the front of the vaccine queue as inequality soars to new heights.

This depraved, self-destructive course of events, so easily foreseen and prevented if only socialist healthcare values had prevailed, is destined to let Covid-19 continue mutating — and threatening society for years to come.

The slow pace will continue for the foreseeable future and is due to several factors:

And then there is the problem of vaccine imperialism. Rich countries are hoarding the vaccine: the top eight countries have an anticipated one billion surplus doses, according to the International Monetary Fund, with some like Canada ordering five times as many as they have citizens. Worse, with a few exceptions, they are not acceding to the waiver of intellectual property (IP) rights so that generic versions can be produced in many facilities now standing idle. 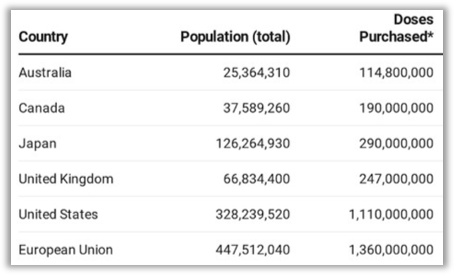 Germany’s leader, Angela Merkel, has taken over as the most criminal international profiteer on behalf of her compatriots at BioNTech (which collaborates with Pfizer). Her government claims, “The protection of intellectual property is a source of innovation and this has to remain so in the future.”

But this ignores three basic facts:

Merkel’s line is identical to Big Pharma’s narrative 20 years ago, when trying to make Aids medicines unaffordable so as to profit off IP on antiretroviral drugs subsidised by the public sector.

In terms dictated by transnational monopoly pharmaceuticals, countries have been struggling to procure vaccines at affordable prices. South Africa has, as a result, been unable to procure enough doses of Covid-19 vaccines. The Sunday Times reported last week that the government had procured one million Pfizer doses and 1.1 million doses of J&J. (In comparison, the Aspen Pharmacare plant in Nelson Mandela Bay is now up and running and has the capacity to produce more than 25 million doses each month.)

For the Phase 2 roll-out plan, which aims to vaccinate more than five million adults aged over 60 years or who have urgent healthcare needs, such procurement is insufficient. This is beside the fact that the Phase 1 roll-out to inoculate 1.2 million healthcare workers was a failure.

Indeed, elderly people who should be inoculated in Phase Two are already unable to get the vaccine because of shortages in many sites.

Though the national Department of Health had assured the public that transportation and storage would not be a problem, it is evident that the elderly in especially rural provinces were turned away from vaccination sites — in part because of the healthcare system’s inability to deliver.

The problems of distribution, transport, storage and the simple lack of vaccines are compounded by inadequate capacity within the health sector, as there are insufficient health workers. Many nurses remain unvaccinated.

And the private sector — which pledged to assist the state — is also ill-equipped for vaccinating the masses of people, given the class-apartheid system of healthcare they have designed, keeping 86% of society dependent upon a state that suffers ever-worsening Treasury budget cuts.

In addition to these problems, expecting our society to register online for vaccination is absurd. Old people in the villages will not be able to register. This explains why there is a low level of registration across all provinces.

The Gauteng Department of Health — suffering endless corruption allegations — understated the problems of roll-out, labelling them merely “teething issues”. President Cyril Ramaphosa at least admitted that the roll-out is “slow,” although he shifts the blame to vaccine imperialism and therefore holds that the problem is beyond the government’s control.

Yet, Ramaphosa tells society this periodically, but never articulates a strategy to put pressure on the imperialists. This puts even more pressure on groups like the C19 People’s Coalition and Doctors without Borders to organise advocacy, such as protesting at embassies.

Why isn’t this crisis inserted by Ramaphosa daily into global media, the United Nations, other multilateral institutions, and bilateral negotiations, especially with the European Union and United Kingdom? DM