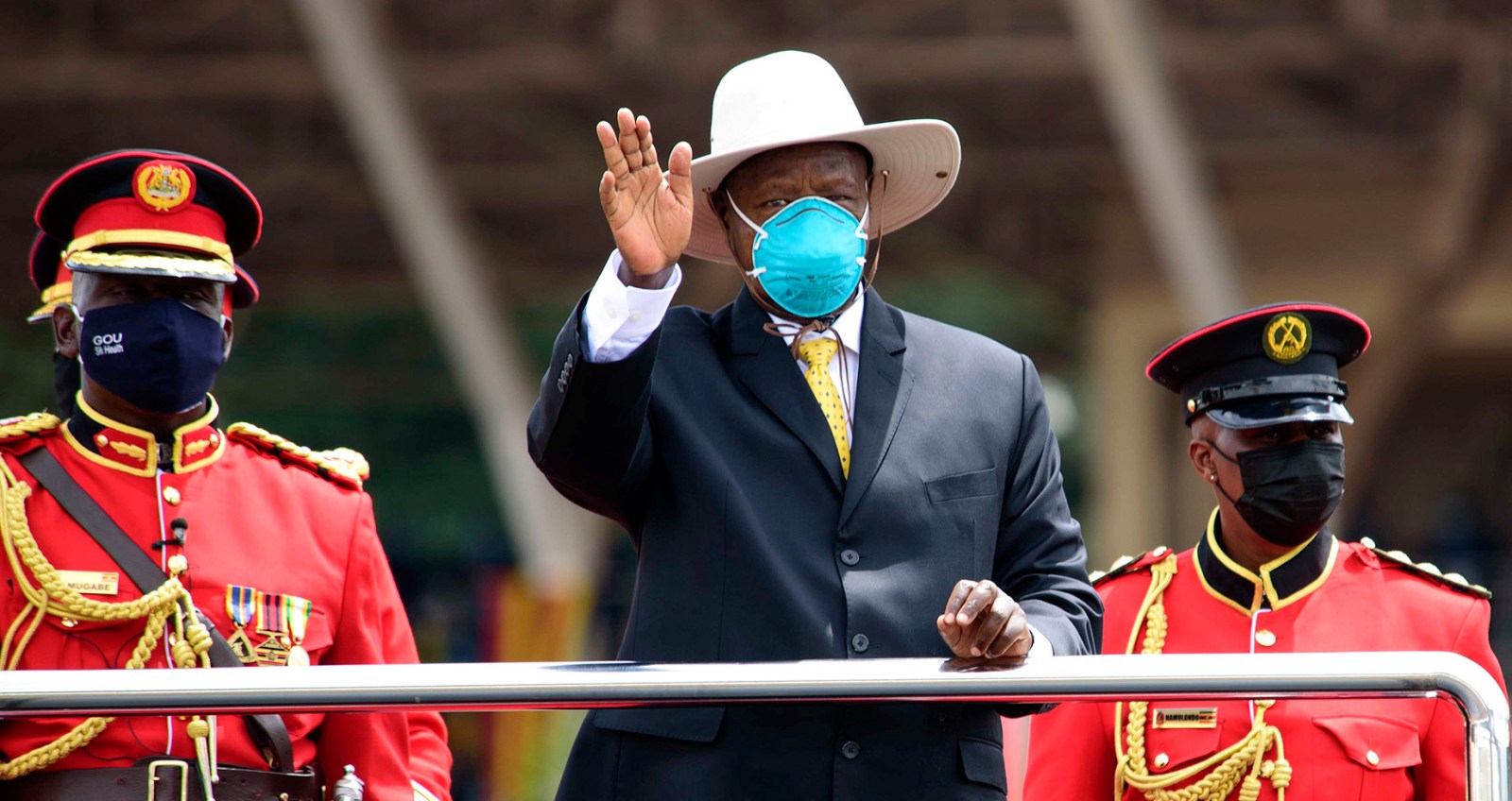 Uganda's President Yoweri Museveni waves during an inauguration ceremony for his sixth term at Kololo Ceremonial Grounds in Kampala, Uganda on 12 May 2021. Museveni, who has been in power since 1986, was declared the winner of the 14 January 2021 elections with 58.6% of the vote. (Photo: EPA-EFE / Nicholas Bamulanzeki)

Some big elections loom in Africa in 2021. While Ethiopia’s parliamentary election, having just been postponed again, remains shrouded in uncertainty, on the horizon are votes in Chad, Zambia, Gambia and Nigeria.

Andrew Firm is one of the authors of the CIVICUS State of Civil Society Report 2021. CIVICUS is a global alliance of more than 10,000 civil society organisations and activists dedicated to strengthening citizen action and civil society throughout the world.

Elections should offer opportunities for citizens to make demands of their political leaders, debate alternatives and express dissent. People should go to the polls in the belief that their votes will count and their voices will be heard, and if presidents are proved to be corrupt, self-serving and unwilling to listen, they should be able to unseat them. All efforts should go into making the coming elections live up to these standards.

Although a look back at the recent history of Africa’s elections offers limited grounds for optimism, there have been some bright spots.

In Malawi in 2020, civil society campaigning led to the election being rerun, overturning the result of the original flawed vote, while Seychelles saw an unprecedented peaceful change of government. But too often elections have failed to give people a real say. Time and again, flawed elections only confirmed the ongoing power of incumbents.

In Uganda in January, President Yoweri Museveni’s sixth presidential term was assured, in the face of a challenge by charismatic outsider Bobi Wine, by repeated violent attacks on and criminalisation of Wine and other opposition leaders, with voting taking place in an atmosphere of military intimidation and amid a nationwide internet shutdown.

The situation had been much the same in Tanzania in October, although the change at the top occasioned by the death of President John Magufuli in February may offer some hope of a reversal of repression. For authoritarian power, the pandemic provided an additional opportunity to limit international monitoring of elections, which was largely blocked in countries including Burundi, Tanzania and Uganda.

In country after country in West Africa, political change was simply not on the ballot. The Gnassingbé family dynasty that has held power since the 1960s continued in Togo, while in Benin President Patrice Talon so effectively eliminated political competition that at one stage it appeared no one would be eligible to run against him; a couple of no-hope token candidates were allowed through the net to offer the thinnest semblance of political competition.

Time and again incumbent presidents have re-engineered constitutions to their own benefit, erasing term limits that should have offered a check on untrammelled power. Even Côte d’Ivoire’s President Alassane Dramane Ouattara did so, an about-face on a promise not to stand again. Guinea’s octogenarian President Alpha Condé did likewise, rewriting the constitution before winning a third term in an election marked by lethal violence.

Condé, at 83, was not the only president of advanced years refusing to countenance retirement: Ouattara is 79 and Museveni 76. And yet Africa is a famously youthful continent. Time and again Africa’s elections refused to speak to young people’s demands — for education, jobs and services — and instead widened the gap between the aspirations of young people and the mindset of national leaders.

In the face of these challenges, many civil society and opposition activists across the continent offered resolute resistance and worked to defend democracy. And hope continues to emanate from Africa’s many young people. With formal elections failing to ensure proper arenas to express dissent, young people are forging their own paths, taking to the streets in great numbers to demand change.

A new report, the State of Civil Society 2021, by global civil society alliance CIVICUS points to mass protest as a proven means of advancing change.

Globally, Chile is on the road to developing a radical new constitution that was the key demand of a mass protest movement that refused to back down. India’s intransigent government was forced to the negotiating table by a determined farmers’ protest. Civil disobedience is resisting military rule in Myanmar.

Africa is no exception to the global wave of protests. In the past year alone people have bravely taken to the streets to stand against corruption in Zimbabwe, demand an end to police brutality in Nigeria and call for action on gender-based violence in Namibia. An astonishing 100,000 people marched against oil pollution in Mauritius last August. Each unfree and unfair election has seen people demonstrate to demand democracy.

Many of those mobilising have had to face an unacceptable risk of violence. Nigeria’s #EndSARS protests made international headlines, embarrassing the government to the extent that lethal violence was unleashed in October’s Lekki Toll Gate Massacre. Several deaths resulted when Ivorians protested against Ouattara’s “stealth coup”.

Namibia’s #ShutItAll down protests were met with brutality, but also won presidential acknowledgement of the problem of gender-based violence and a commitment to establish new courts and a sexual offenders registry.

The banning of female genital mutilation in Sudan was a direct result of the heavy involvement of women as leaders of the 2019 revolution that unseated President Omar al-Bashir.

It was not just in Namibia and Sudan that women have been at the forefront of protests. Around the world and across Africa, mass movements are being led by young people, and among them are many young women. They are mobilising hope.

Young people are not only Africa’s future, they are its present. They are making change happen now, whether out-of-touch leaders like it or not. Those standing in forthcoming elections would do well to listen. DM/MC