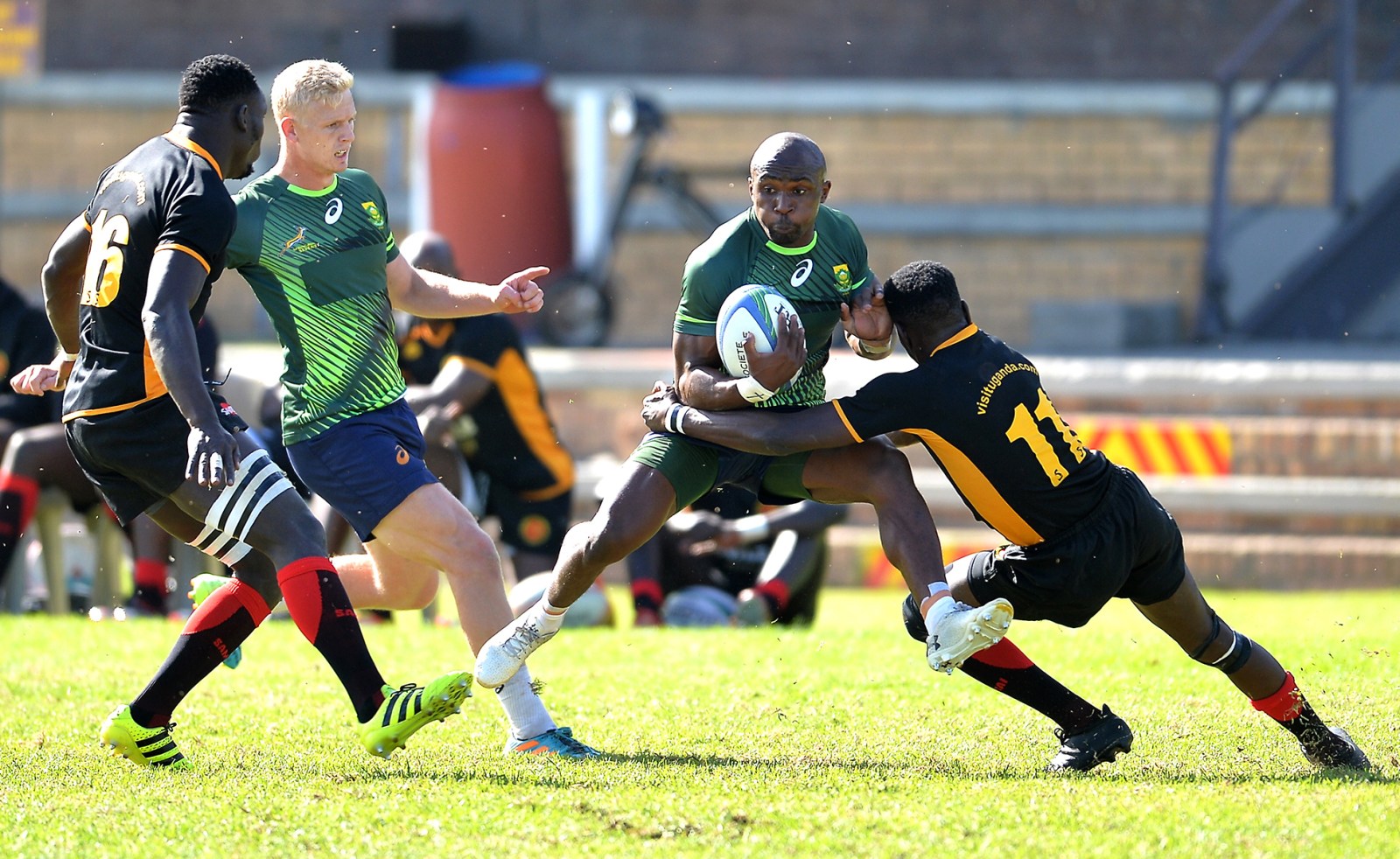 Siviwe Soyizwapi during Day 2 of the Rugby Africa's Sevens Solidarity match between Uganda and South Africa 1 at Markotter Stadium on 9 May 2021 in Stellenbosch. (Photo: Ashley Vlotman / Gallo Images)

Revenues dropped 45% and SA Rugby cannot afford to go without bums on seats for RWC Sevens.

SA Rugby have just about given up on having fans in stadiums for the upcoming British & Irish Lions Tour to South Africa, but there is still hope that 2022 will be back to some sort of “normal”.

World Rugby confirmed that Rugby World Cup (RWC) Sevens 2022 will be hosted at the 57,654-capacity Cape Town Stadium between 9 and 11 September 2022. At this stage, planning will incorporate having spectators.

Part of Sevens’ appeal is fan interaction, and to stage a successful RWC Sevens it’s vital that spectators are in the stadium. With the tournament still 15 months away there is a reasonable expectation that the pandemic could be eradicated, or if not, be under control by then.

But as we have seen with the Lions tour, which will take place in empty stadiums, nothing is guaranteed. More than a year ago, when the first wave of the pandemic struck, there was an expectation that by mid-2021 it would be under control.

Instead, South Africa is heading into a third Covid-19 wave and is only just starting the second phase of a vaccine roll-out plagued by logistical and supply issues.

SA Rugby has been heavily affected, initially with the cancellation of tournaments such as Super Rugby and then, later, the staging of competitions without fans.

The knock-on effect was that SA Rugby’s revenues declined by 45% (about R530-million) between March 2020 and March 2021 due to the impact of the pandemic.

Fortunately, some strong management and key early decisions over the entire industry to cut costs, meant that only a handful of jobs were lost and SA Rugby posted a modest loss of R7.9-million in the last financial year.

But the worst is not over and even though the Lions series will go ahead, securing about R500-million in much-needed TV revenue for SA Rugby, the eight matches will not have fans present.

In “normal” circumstances, 172,262 people (which includes local fans) would have spent a total of 393,870 days in local hotels and accommodation outlets.

The loss of Lions fans is a massive blow to the country and, for SA Rugby, losing out on potentially another 171,000 unsold tickets for RWC Sevens 2022 would be disastrous. They have already lost in the region of R90-million on unsold Lions tickets.

“By the end of the (financial) year it was a triumph to still be in business,” said Jurie Roux, SA Rugby CEO.

“SA Rugby did not have the reserves to ride out the storm without any impact, nor were government bailouts available. It took a unique collaboration across the industry to arrive at a drastic cost-cutting plan to keep the sport afloat.

“We have managed to avoid widespread job losses or racking up the losses of some of our international peers, but it requires ongoing austerity and extreme financial vigilance to maintain what is a precarious position.

“Unfortunately, the austerity measures will have to continue. The unforgiving truth at the elite end of the sport is that we are in the entertainment business and our product is rugby matches and the 365-day-year story that surrounds them.

“Without matches and an audience we have little or no income and until we return to a situation where venues are allowed 100% capacity, we will remain under extreme financial pressure.

“We have weathered Covid’s first storm, and the return of our national teams and the arrival of the British & Irish Lions will be a great psychological boost. However, I cannot stress enough, we remain on a financial tightrope which will require careful management and financial restraint to survive.”

RWC Sevens 2022 will be contested by 24 men’s and 16 women’s teams. The top eight men’s teams and top four women’s teams from the hugely successful RWC Sevens 2018 in San Francisco have already secured automatic qualification for the tournament in 2022.

South Africa’s women’s team are automatic qualifiers as hosts, which is another boost for the newly enhanced women’s programme under the leadership of high-performance director Lynne Cantwell.

A month after the RWC Sevens there will be the 15s Women’s World Cup in New Zealand and there will be a small overlap of players between the two codes.

In the women’s section, defending champions New Zealand, France, Australia and USA have already booked their places for Cape Town.

Teams that have not qualified automatically will do so via their respective regional tournaments in Europe, Oceania, Asia, North America, South America and Africa, with 16 places available in the men’s tournament and 11 in the women’s from regional competitions.

Cape Town hosts the South African leg of the World Sevens Series and has consistently delivered the biggest crowds and best event on the annual global calendar. Holding the World Cup in the Mother City was a logical progression for World Rugby.

“This is an exciting time for rugby Sevens, with less than 70 days to go until the Olympic Games in Tokyo and now with Rugby World Cup Sevens 2022 also on the horizon,” said World Rugby chairperson Bill Beaumont.

“South Africa has a rich history in hosting world-class international rugby Sevens events, and we anticipate that Rugby World Cup Sevens 2022 will once again raise the bar for this unique tournament and be like no other.”

Mark Alexander, president of SA Rugby, said: “South African rugby is eager to turn the vibrancy of this new brand into the vibrancy of a packed live event where we can showcase both our country and our passion for the sport.

“This will be the first senior World Cup we have hosted since 1995 and we are determined to make it as special in its own way.

“The Cape Town Sevens has established itself as a major must-see event on our national sporting calendar, but we will be taking Rugby World Cup Sevens 2022 to the next level.” DM168