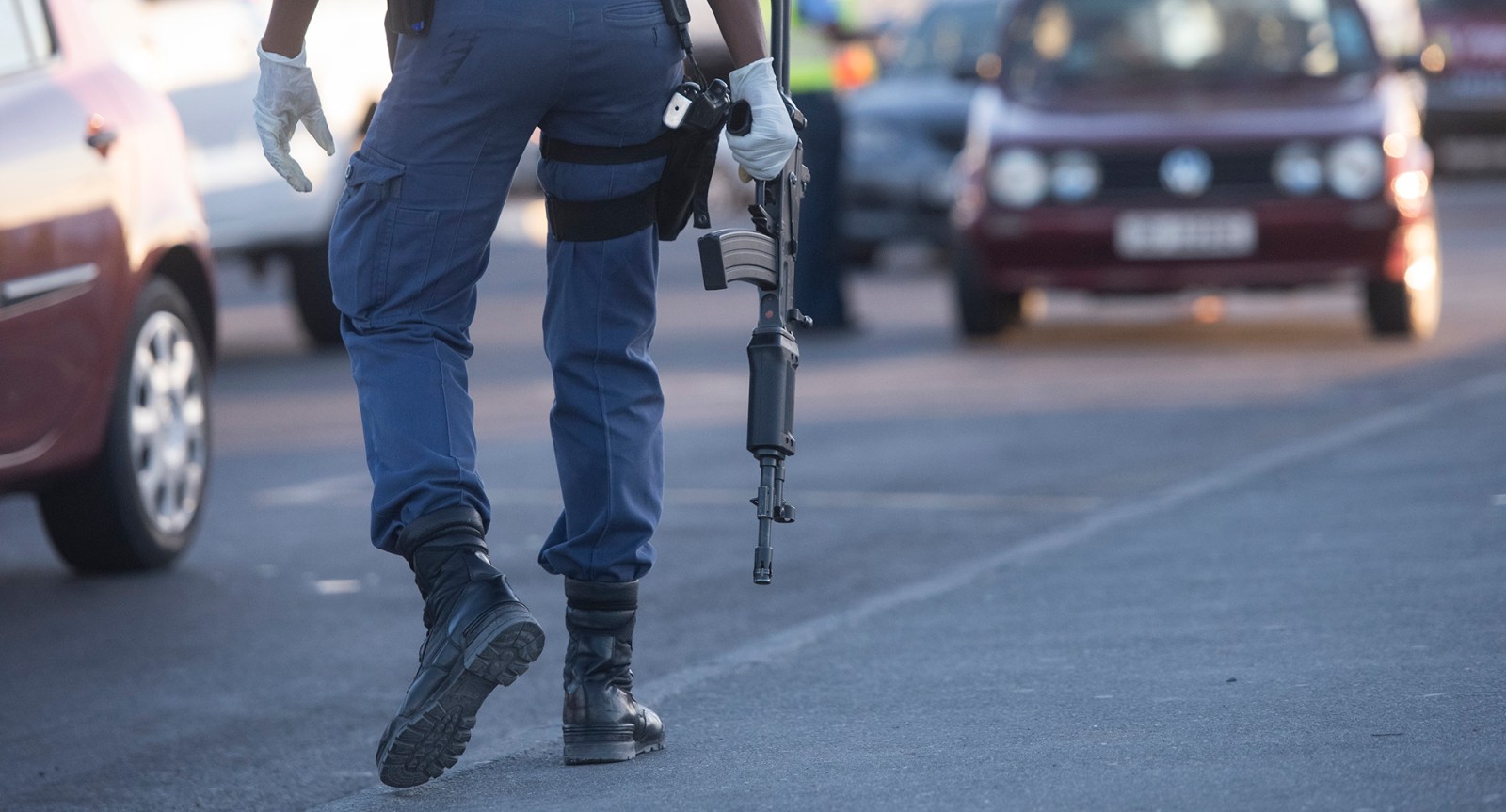 The chairperson of Parliament’s Portfolio Committee on Policing, Tina Joemat-Pettersson, has called on police management to account for its ‘systemic’ failure to discipline officers accused of violent crimes. She intends to raise this when the committee meets with the South African Police Service on ‘discipline management’ on Wednesday.

The meeting may be the first time that SAPS is compelled to respond to a recent Viewfinder investigation which revealed that senior police officers routinely exploit legal and regulatory loopholes to protect their colleagues implicated in violent crimes including assault, torture, shootings, rape and unlawful killings. Police have not responded to queries from Viewfinder and it skirted questions on the issue in Parliament last week.

The chairperson of Parliament’s portfolio committee on policing (PCP), Tina Joemat-Pettersson, spoke to Viewfinder on Friday. “We (the committee) agree that there is a problem… We have to tighten the loopholes,” she said.

Also on Friday last week, the Independent Police Investigative Directorate (Ipid) presented its budget in Parliament. The watchdog revealed that its case intake jumped by 9%, up from 5,640 to 6,122 cases in the last financial year. The vast majority of these cases relate to complaints of police brutality.

As at the end of March, Ipid investigations included 794 killings by police, 665 torture cases, 1,635 alleged shootings and thousands of assault cases.

The presentation also revealed that SAPS had refused to “take steps” against a record number of officers implicated by Ipid in such crimes.

Ipid head of investigations, Matthews Sesoko, said SAPS had failed to initiate nearly half of the watchdog’s disciplinary recommendations against police officers.

In cases that were concluded, disciplinary outcomes statistics showed that the police service was much more likely to acquit, withdraw or outright refuse recommendations against its members than to hold them accountable via convictions and proper sanctions.

In spite of the number of killings and brutality allegations reported to Ipid in 2020/21, the SAPS had dismissed only six police officers following departmental hearings of these cases.

“We have regular engagements with [police management]… in terms of issues that we pick up when we do our statistical analysis. It is now at the behest of the police to look at these issues that we raised with them and do a management intervention,” Sesoko said.

The numbers reported last week Friday support a belief long held by watchdog investigators and senior managers who have spoken to Viewfinder in recent months — that there is a correlation between poor discipline management in SAPS and escalating brutality by its members.

A report circulated to MPs last week revealed that officers accused in a high-profile police brutality case from last year — the death of Petrus Miggels after an alleged assault by police on the first day of the national Covid-19 lockdown in Ravensmead outside Cape Town — were given “corrective counselling” following a departmental hearing.

Parliament wanted to know why the sanction was so lenient. Viewfinder put the question to SAPS in the Western Cape, but had not received a response at the time of publication.

Receiving Ipid and SAPS budget presentations last week, Parliament flagged a number of Viewfinder’s recent findings. A parliamentary research unit report, circulated to MPs ahead of the SAPS budget presentation, called out the police for letting criminally accused officers off the hook with light sanctions, and for their routine failure to comply with watchdog recommendations against implicated officers.

Another report, circulated to MPs ahead of the Ipid presentation, flagged SAPS for thwarting Ipid recommendations and the apparent lack of impartiality and transparency in police disciplinary hearings.

On Wednesday, 19 May, DA MP Carin Visser asked the SAPS to respond to Viewfinder’s findings, especially related to the police’s failure to implement Ipid recommendations and the issue of low sanctions meted out for serious offences.

Lieutenant-General Lineo Ntshiea, SAPS divisional commissioner for human resources management, said the police were seeking to establish a dedicated unit to deal with the most serious cases of misconduct.

One of the current challenges with discipline management in the police is that officers are appointed ad hoc to represent SAPS or preside over hearings in cases — even very serious ones — against their accused colleagues. This leads to a potential conflict of interest and means that the attention of such officers is divided between their day-to-day duties and ensuring that proper departmental hearings take place.

In spite of the questions raised by the standing committee on security and justice last week, Parliament’s track record shows that it has been unable to hold SAPS accountable for its failure to discipline problem officers.

In a 2014 presentation to Parliament, Ipid raised grievances about SAPS’ non-compliance with disciplinary recommendations against accused officers. MPs were shocked, and police management acknowledged that more needed to be done to ensure that discipline was “implemented without favour” and that sanctions were standardised to match the seriousness of offences.

At the time, the committee asked SAPS and Ipid to return within a year with “one combined report outlining mutually agreed rules of the game in terms of recommendations”.

But, a review of the committee’s minutes on the parliamentary monitoring group suggests that this never happened. Queried this year, the committee responded: “This is a matter that was raised in 2014… the current chairperson was not at the helm at the time. It would be unfair to expect the current chair to comment on 2014 matters.”

“The ineffectual nature of parliamentary oversight is such that all one can do is to interrogate and scold SAPS management for weak consequence management. They respond with the usual apologies, evasion, promises and plans to improve performance, but really there’s nothing the police portfolio committee can do about it,” Mbhele said during a recent interview.

“Ultimately, the non-binding nature of recommendations, be they from parliamentary committees or Chapter 9 institutions, means that they can be, and usually are, ignored. This is because a failure to implement them carries no material consequence.”

But, Annelizé van Wyk, Parliament’s former and longest-serving chairperson of the portfolio committee on police, said there is a pathway for committee recommendations to become enforceable instructions, via formal adoption in Parliament.

“The speaker’s office then has the responsibility of writing to a minister and saying, ‘Parliament has adopted the following recommendation, and you are required to report back to Parliament on this date, on these issues’,” she said, but added that this had hardly ever happened during her many years in Parliament.

Another method that Parliament has for enforcing reforms on the executive is through changes to legislation. The Draft SAPS Amendment Bill, which is due to be presented to the committee in August, is where the committee intends to concentrate its efforts, said Joemat-Pettersson.

She added that she wanted to see recommendations from the Expert Panel Report on Policing and Crowd Management incorporated into an amended SAPS Act. The panel recommended that police discipline management be professionalised via a new unit of permanently employed and expertly trained officials. This would seek to curb the conflict of interest which arises when police officers are appointed ad hoc to lead evidence and preside over hearings where their colleagues are implicated by Ipid in violent misconduct. Ipid has also been a recent proponent of such a reform.

“The first point that I come back to is amending the SAPS Act and ensuring that the high-level review panel recommendations are reflected in the amendment bill,” Joemat-Pettersson said.

“Whilst you do not have an effective legislative tool, SAPS will always have an excuse to not implement the Ipid recommendations.” DM/MC