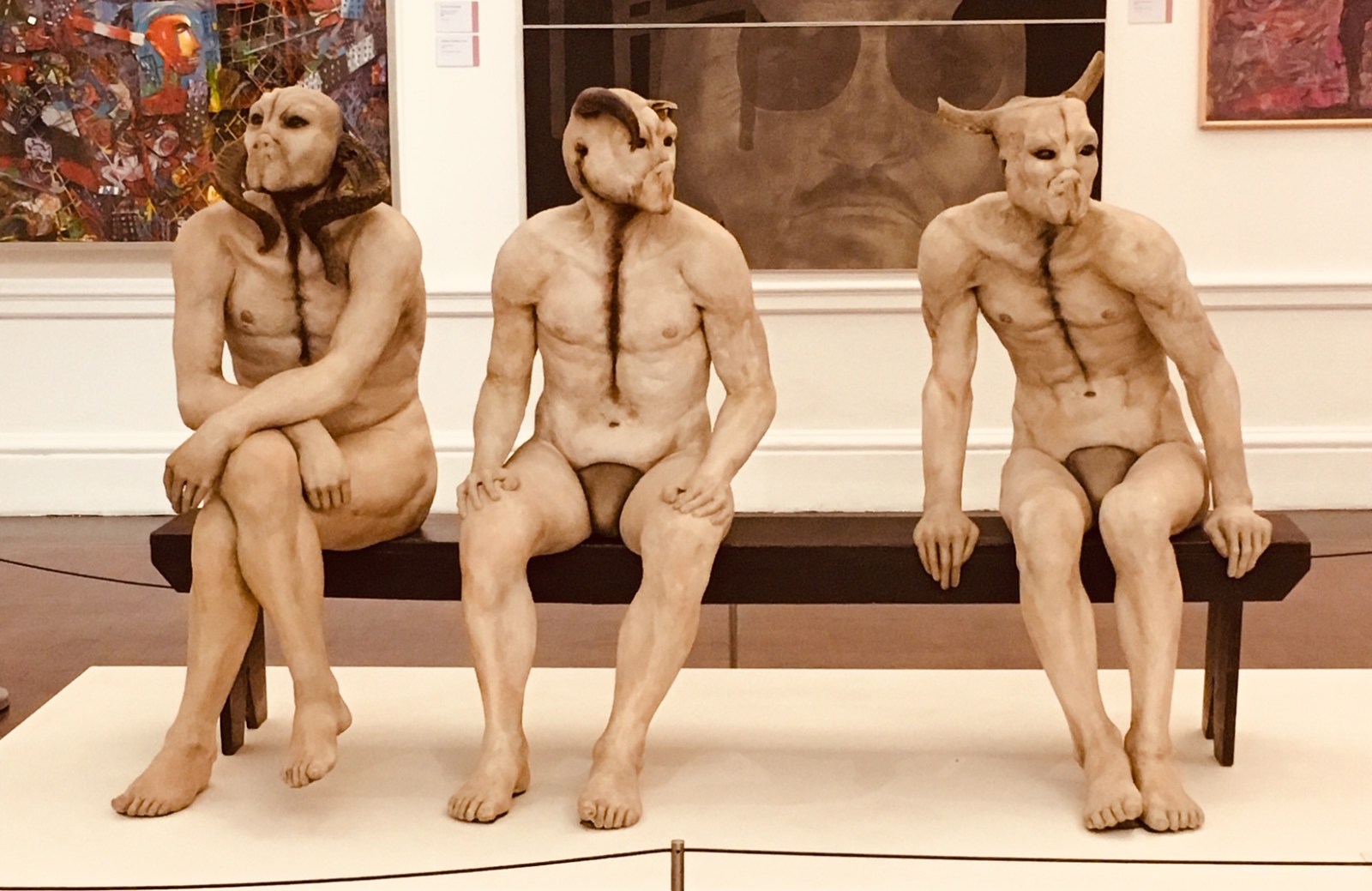 With each article on Maverick Life Art School series, we take a closer look at an individual piece of iconic South African art. This week we check out the undeniably iconic Butcher Boys.

The sculpture is made up of three oil-painted plaster figures whose bodies mostly resemble the human male body, but whose heads are part animal. The three are seated next to each other on a bench, each seemingly staring out in a different direction. Their scarred bodies look human, but their mutated heads seem to be sprouting horns. Their eyes are black, and on two of the figures there are holes where their ears should be. The third head has horns sprouting out where the ears should be. On all three, their noses are deformed and they don’t seem to have mouths. It is as though their mouths have been smashed in or sliced off along with a part of their nose.

“Clearly a central theme of this work is destructiveness or mutilation; the title Butcher Boys would make this obvious if the figures themselves had not already done so”.

At the time when Alexander made the sculpture, the apartheid government, then under the leadership of PW Botha, had declared the first State of Emergency. It went into effect on 20 July 1985. As explained on the South African History Archive website, this gave “the President of South Africa the ability to rule by decree, to heighten the powers of both SADF and SAP, and to restrict and censor any reportage of political unrest”. In that same year, and in response to the harsh political realities, Alexander began work on Butcher Boys.

What the learned minds say about the work.

“The important point about these heads… and in this lies their visual impact, is that they are not straightforwardly mutated. They are not animal heads resting on human bodies, but human heads semi-animalised through mutation. And the sense in which they have partly transformed themselves, partly been transformed, is what lends them a repellent force,” writes art historian and University of Cape Town lecturer Anna Tietze in her 2016 essay, Of Beasts and Men.

Tietze continues: “Clearly a central theme of this work is destructiveness or mutilation; the title Butcher Boys would make this obvious if the figures themselves had not already done so.

“But while the title suggests that the figures themselves are the mutilators in question, the figures make clear that they are in fact – or also – victims of mutilation. And yet they are muscular, young, adult male bodies, and they sit, looking assertive and predatory, on their functional bench.

“Within each figure, then, is contained the idea of both extreme aggressor and desperate victim. Speculatively one might say that we are being asked to view in metaphorical terms the damage done to minds by their own brutality of thought and behaviour.”

Art historian and critic, Dr Tenley Bick, penned a paper in 2010, titled Horror Histories: Apartheid and the Abject Body in the Work of Jane Alexander, in which she wrote of Butcher Boys: “Alexander’s work – perhaps most famously Butcher Boys… engages with the particularly grave set of issues that have come to define the historical context in which the works were produced, and the enduring psychosocial aftermath of its horrors that they continue to remind us of today.”

Dr Amy Nygaard Mickelson, an adjunct professor at the University of St Thomas in Minnesota in the US, also wrote: “Their scarred flesh, exposed spinal bones, horned crania and vacant black eyes undermine any sense of beauty to be found in their carefully modeled bodies.

“The Butcher Boys discomforts us because their form comes too close to that of humans, yet their anatomy is riddled with nonhuman elements and mutations. Alexander has eliminated, or grossly mutated, each figure’s sense of sound, sight, smell and taste…

“Viewers of the Butcher Boys confront an uncanny image of brutalisation. The figures are not sympathetic victims or overtly threatening monsters. They are intimidating, yet the violence against their bodies elicits a certain amount of empathy. They are unnamable beings without classification. They are neither man nor beast, but rather both.”

In January 2012, South African band, Die Antwoord, released a trailer video for their song Ten$ion, which featured a figure based on one of the figures in Alexander’s Butcher Boys. Alexander, who famously chooses to remain out of the public eye, took up the matter through her lawyer Martin Heller, who stated: “Ms Alexander does not intend to limit her work’s interpretation, and she does not seek to interfere with other artists’ work. In this case, however, Ms Alexander is concerned that Die Antwoord’s use of her work and its context might be publicly perceived as reflecting her own artistic intention.

“In creating the work, Ms Alexander referred to the dehumanising forces of apartheid.” The teaser video was removed from the internet shortly after.

Where are the Boys now?

The sculpture was acquired by the South African National Gallery in 1991 and now forms part of its permanent collection. It is currently on exhibition at the National Gallery in Cape Town, located at the Company’s Garden, a stone’s throw from Parliament. DM/ML