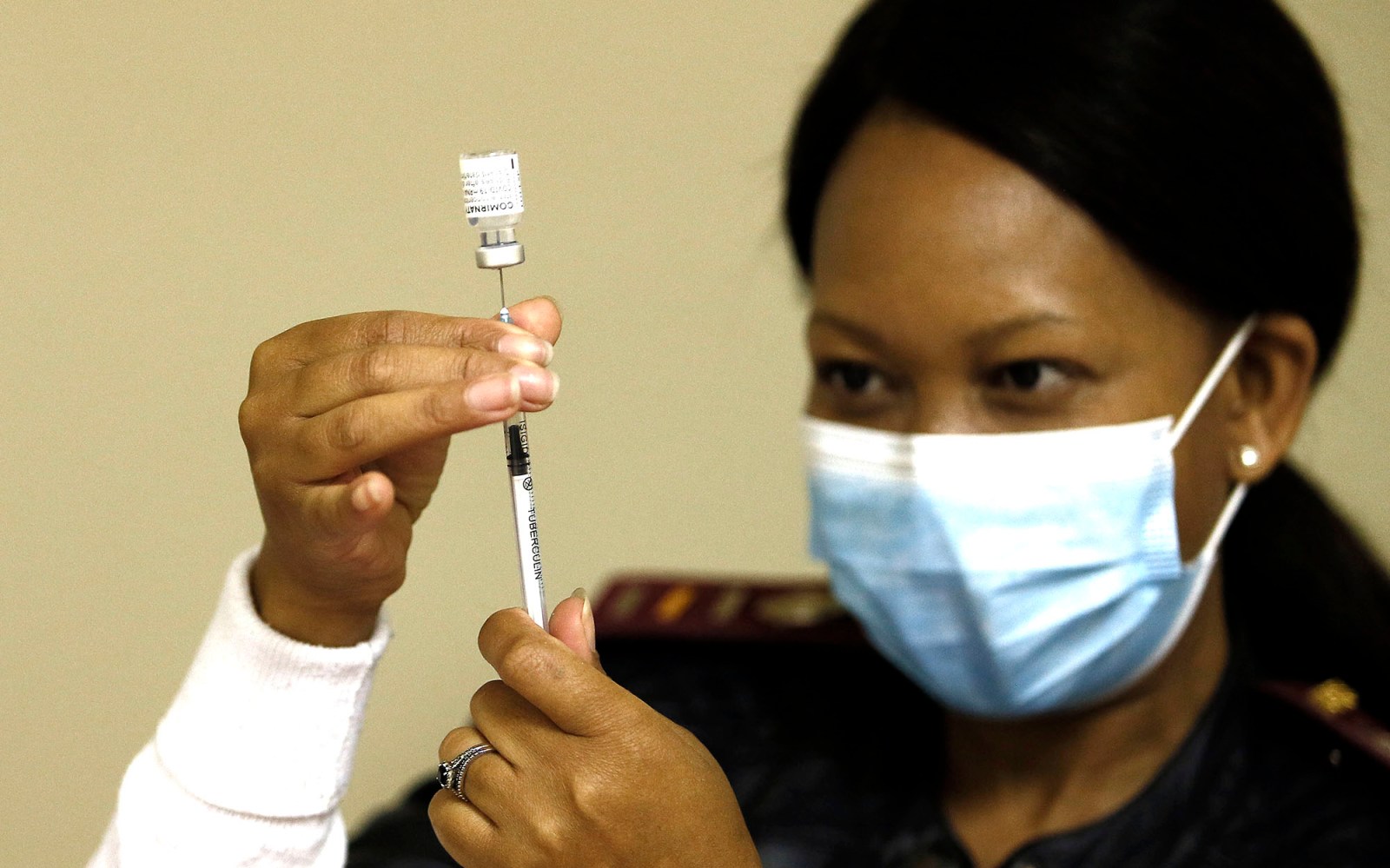 A member of the nursing staff at the Munsienville Care for the Aged prepares a vaccine. (Photo: Felix Dlangamandla)

The US said Americans should avoid travelling to Japan, with the country under a State of Emergency that has sown doubts about Tokyo’s plans to host the Olympics in less than two months.

New coronavirus infections in the US rose at the slowest pace of the pandemic in the past week. At the same time, the Centers for Disease Control and Prevention warned that under-vaccinated areas in the US could become hotspots for a mutation of the coronavirus first detected in India and is increasing surveillance of the more-transmissible variant.

Seychelles, which has vaccinated a greater proportion of its people against Covid-19 than any other nation, said active cases of the disease fell 38% in the week to May 22 as a recent surge in infections continues to abate.

Denmark, which has suspended the use of the Johnson & Johnson and the AstraZeneca Covid-19 vaccines from its national programme, will donate three million shots to countries outside of Europe this year, Prime Minister Mette Frederiksen said, according to the Ritzau newswire.

Denmark will most likely give the vaccines via the World Health Organization’s Covax program, Frederiksen said, according to Ritzau. The final number of vaccines to be donated has not yet been decided, she said.

The Nordic country had ordered more than 10 million vaccines from the two producers and has now started a voluntary system that will allow some Danes to receive the shots outside of the national programme.

US issues do-not-travel advisory on Japan

The US raised its travel advisory on Japan to say Americans shouldn’t visit the country, where sections are under a State of Emergency that could be extended.

The State Department issued the upgraded travel advisory on Monday. The move is another blow to Japan’s plans to host the Olympic Games starting on July 23.

Seychelles, which has vaccinated a greater proportion of its people against Covid-19 than any other nation, said active cases of the disease fell 38% in the week to May 22 as a recent surge in infections continues to abate.

The Indian Ocean archipelago has 1,179 active cases, the health ministry of the nation of 98,000 people said in a statement on Monday. Hospitalisations declined and to date no one who has been fully vaccinated has died of the disease, it said.

Governor Andrew Cuomo said New York has surpassed 10 million vaccinated residents, more than half the state, but that the rate of shots has dropped off precipitously as the “youthful and the doubtful” resist the shots.

Only 43% of residents aged 16 to 25 are vaccinated, compared with 85% among people aged 65 to 74. Cuomo said the state would set up vaccine centers across state parks ahead of the Memorial Day holiday weekend.

Chile will grant citizens who are fully vaccinated against coronavirus greater freedom in the form of a “mobility pass”, as the South American nation oversees one of the world’s fastest inoculation drives.

The electronic pass will allow greater mobility for people living under full or partial quarantines, President Sebastian Pinera said on Sunday. The permit will also make it easier for Chileans to travel around the country, he said.

US cases slow to pandemic low

With more than 61% of US adults having received at least one vaccine dose, the rate of new coronavirus infections continues to slide. New cases rose 0.5% in the past week, the slowest increase since the pandemic began in March 2020, according to data compiled by Johns Hopkins University and Bloomberg.

The total number of infections in the week ended on Sunday, 175,990, was the lowest since the seven days ended June 14. Sunday’s total of 13,310 new cases was the lowest for any single day March 25, 2020, as the nation was heading toward lockdowns.

New York City Mayor Bill de Blasio said all public school students will return to their school buildings come September and that a remote option will no longer be available.

Reopening the largest school system in the US for the roughly one million students represents a big move toward the city’s full reopening and will be crucial to the economic recovery of New York, which has been battered by the pandemic.

The International Olympic Committee will offer vaccines for 20,000 in Japan as part of the Tokyo Olympics, Kyodo reported.

Thailand’s Health Ministry increased the period between the first and second dose of AstraZeneca shots to 16 weeks from 10 weeks, Permanent Secretary of Public Health Kiattiphum Wongrajit said. The adjustment will allow more shots to be distributed to more people in a country that’s currently battling its worst coronavirus outbreak since the pandemic began.

Maldives, which has the world’s fastest growing Covid-19 epidemic, plans to extend a 12-hour curfew in its capital in a bid to slow down the outbreak. The Indian Ocean archipelago has the highest number of infections per million people over the last 7 and 14 days, according to data compiled by Bloomberg.

“The initial restrictions have had an impact on the curve,” Mohamed Mabrook Azeez, spokesman for the president’s office, said in an interview on Monday. “We feel that more measures are needed to further slow down the number of positive cases.”

Croatia said it will ease pandemic measures such as the size of gatherings and restaurant opening hours, Deputy Prime Minister Davor Bozinovic said.

Singapore’s Changi Airport will impose stricter measures at its terminals to safeguard against further coronavirus transmissions after concluding investigations into an earlier outbreak, the Today newspaper reported.

The airport will separate staff handling both incoming and outgoing travellers into various zones and will implement stringent movement controls between these areas, Changi Airport Group Singapore Chief Executive Lee Siow Hiang was cited as saying. The new measures are set to be fully in place by June 13. DM