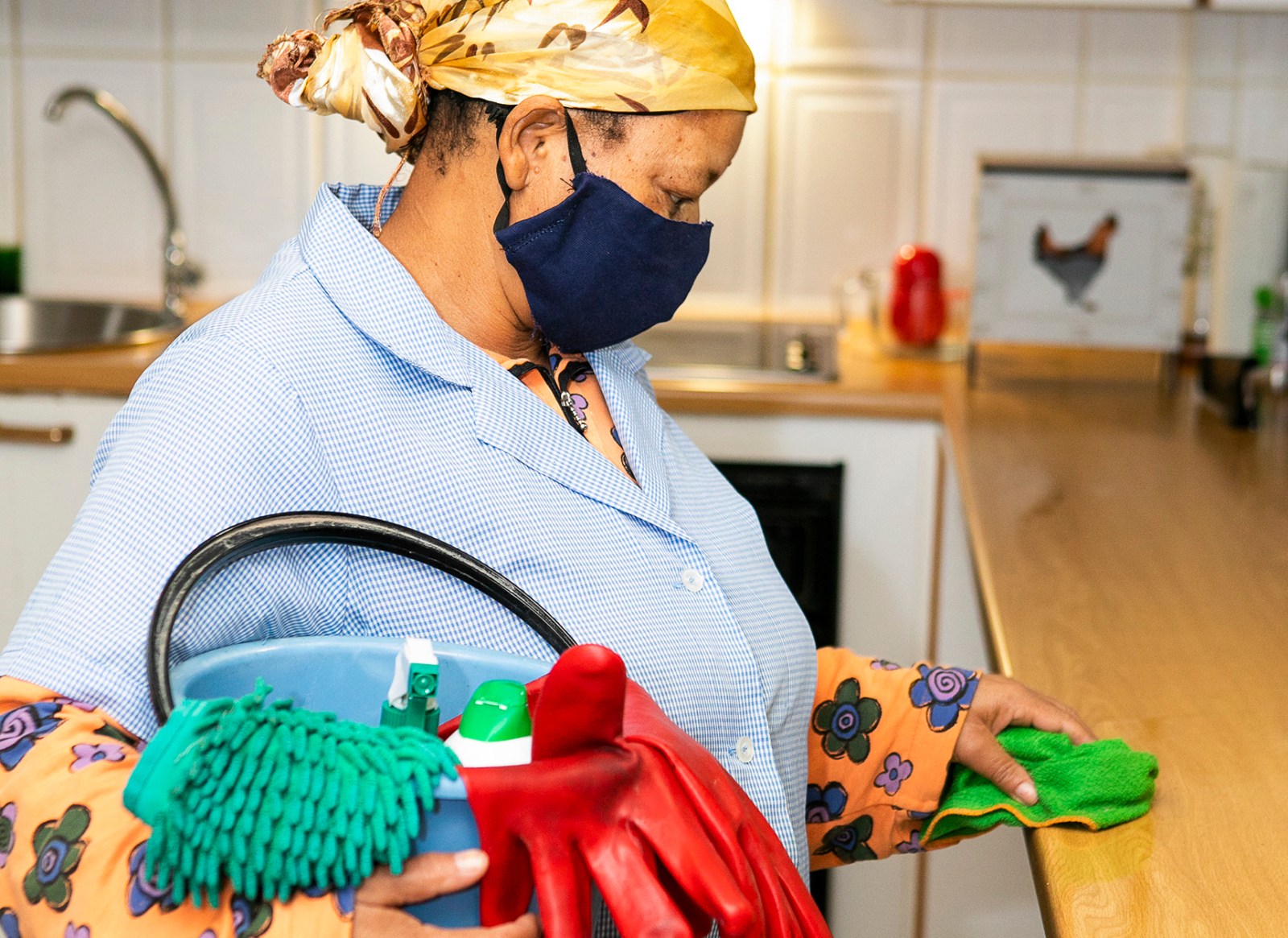 A domestic worker wearing a mask on May 29, 2020 in Cape Town, South Africa. Domestic worker unions and the Socio-Economic Rights Institute of South Africa (SERI) are concerned that the Compensation Fund has not given domestic workers sufficient time to lodge claims for work-related injuries, diseases and death sustained while on duty during the last 27 years. (Photo: Gallo Images/Jacques Stander)

Workers have until November 2021 to submit retrospective claims of the last 27 years.

Domestic worker unions and the Socio-Economic Rights Institute of South Africa (Seri) are concerned that the Compensation Fund has not given domestic workers sufficient time to lodge claims for work-related injuries, diseases and death sustained while on duty during the last 27 years.

The Compensation Fund Commissioner announced in the Government Gazette of 10 March, that domestic workers would be covered by the Compensation for Occupational Injuries and Diseases Act (COIDA).

The inclusion of domestic workers came after a Constitutional Court ruling on 19 November 2020 in the Maria Mahlangu case, declaring their exclusion unconstitutional and that the Act applied retrospectively from 27 April 1994.

Domestic workers were given 12 months from 19 November 2020 to submit their claims. Acting spokesperson of the Department of Labour Musa Zondi told GroundUp that there are currently no claims from domestic workers at this time.

“The Compensation Commissioner is unreasonable. They excluded us for 27 years, but they expect domestic workers to submit their [retrospective] claims within the remaining five or six months,” said Pinky Mashiane of United Domestic Workers of South Africa (Udwosa).

“It took eight years to get justice for Maria Mahlangu, yet they are giving domestic workers only a few months to submit retrospective claims,” said Mashiane.

Concerned that the Compensation Fund has not taken steps to educate domestic workers about the fact that they are now covered by the Act, Seri submitted a letter to the Compensation Commissioner on 8 April.

Thulani Nkosi, senior attorney at Seri, said the Compensation Fund has not acknowledged receipt of the letter or communicated what steps are being taken to address the issues it raised.

Eunice Dhladhla, of the South African Domestic Service and Allied Workers Union (Sadsawu), said the union had requested a workshop from the Department of Labour to equip them with the knowledge required to help domestic workers who wanted to submit claims.

“Unfortunately, we never had that kind of session. We did have a meeting with them but they just briefly explained what COIDA is and how it works. Now, when domestic workers call us for assistance, we cannot offer much help other than referring them to the Department of Labour,” she said.

What frustrated Mashiane most was that during a meeting with the Department of Labour, there was an official from the Compensation Fund who was unfamiliar with the retrospective claims process for domestic workers.

“He said he is still waiting for his superiors to give him information on how to deal with domestic workers’ claims. How can they have a deadline for November when officials who are working for them do not know how to address the issue of the Compensation Fund covering domestic workers?” she asked.

Another concern expressed by Dhladhla was that some domestic workers are hesitant to submit claims because they fear being dismissed from work.

“We still have to educate workers who are still working at the places where they were injured or got sick that they won’t be dismissed if they submit claims,” said Dhladhla.

“We need pamphlets with information; we need to hear them [Compensation Fund] on radio and see them on TV explaining the inclusion of domestic workers in COIDA and the retrospective claims process. We are also not going to rest until this date is extended by at least 24 to 36 months,” said Mashiane.

With the deadline for retrospective claims approaching in six months, the Compensation Commission said it still intends to have planned awareness campaigns, which “may assist to enlighten the public”. DM