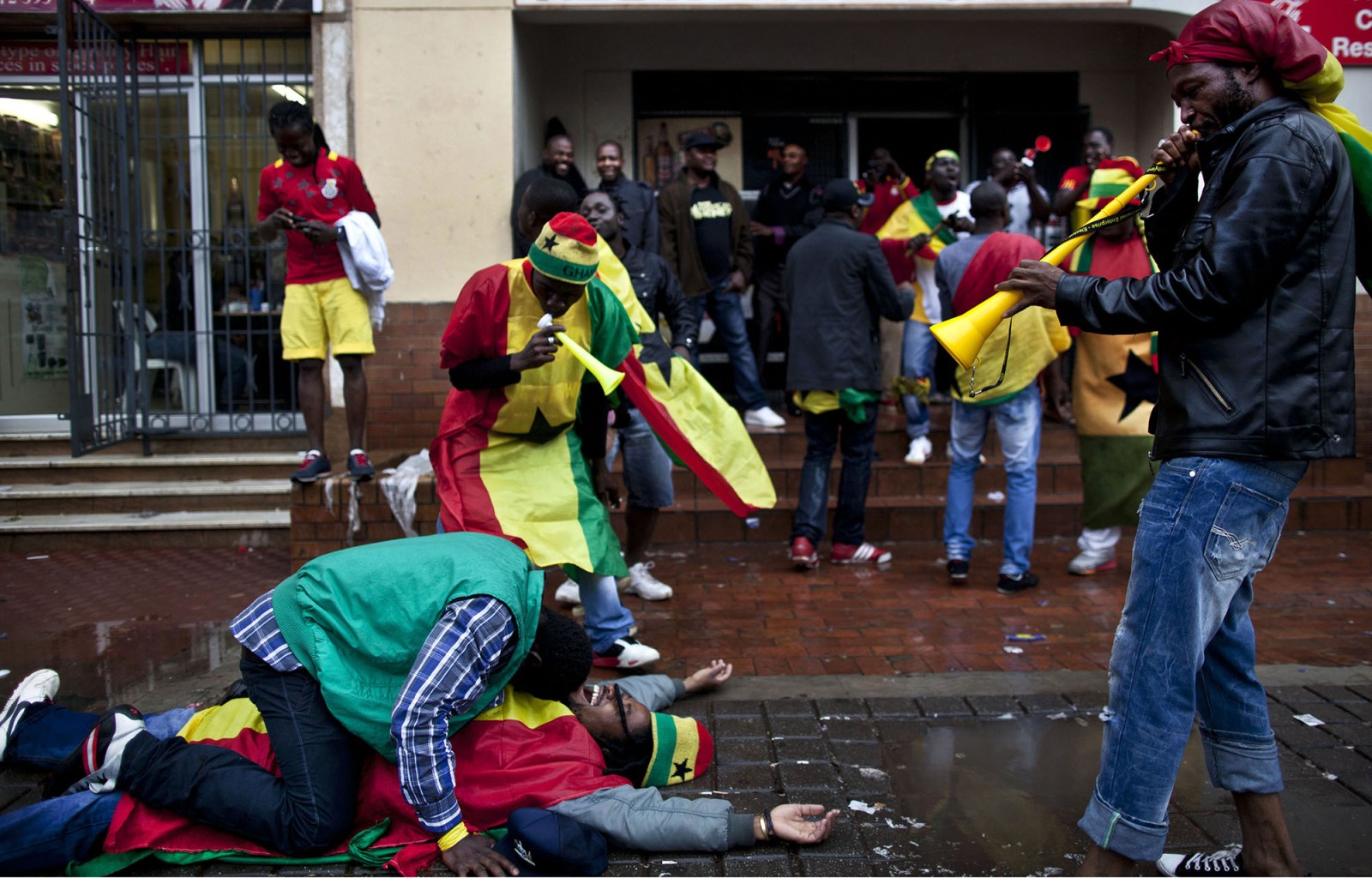 Fans of Ghana and Democratic Republic of the Congo gather in Yeoville, Johannesburg to watch a soccer match between the two countries on 21 January 2012 during the Africa Cup of Nations in South Africa. Yeoville is a community of mostly economic migrants from all over Africa — a vibrant, colourful, often chaotic pan-African area. (Photo: Jonathan Torgovnik / Getty Images)

As the continent marks Africa Day on Tuesday, migrants living in South Africa have spoken about their hopes and fears, and the need for solidarity among the people of Africa.

Migrants in South Africa have shared their experiences of living in the country as the continent celebrates Africa Day, which is marked each year on 25 May.

The day commemorates the 1963 founding of the Organisation of African Unity (OAU), the forerunner of the African Union (AU), and is set aside to reflect on the unity and diversity of the continent, as well as its potential in the field of arts and culture and for economic opportunities.

“It has been a mixed experience for me, living in another country far away from mine for more than 20 years,” says 57-year-old Nigerian Azubuike Muodum, who moved to South Africa shortly after democratic elections in 1994. “I have had many opportunities here, made friends and lived in a community with people who appreciate one another.”

Muodum runs a restaurant in the Johannesburg CBD where he employs five Zimbabweans, three Mozambicans and two South Africans. He says their relationship is “cordial and mutual”, which benefits everybody.

Adetola Olubajo, president of the Nigerian Union SA, said: “Africa needs to be united and there should be a high level of cooperation among countries… Africa is one continent irrespective of our geographical divides. When we leave this continent and go to Europe or Asia, they regard us as Africans first, before they think about our respective countries.”

Olubajo says discrimination and mistrust affect the continent’s unity and cooperation. “There is a need for more integration among African countries because social cohesion is lacking due to lack of trust.”

Felistas Malete, a Zimbabwean national, moved to South Africa to study at Wits University in 2017. She says it has been a “welcoming environment” to live in.

“Living away from home is sometimes complicated, especially when you just arrive, but everything settles in as time goes on and you begin to meet people from different backgrounds,” she says.

But migrants living in South Africa also express fears over xenophobic violence and have often been caught up in hostilities. The most recent attacks happened in March in Durban, when locals attacked foreigners and damaged their property.

Olubajo said this happens as a result of ignorance of the history of African values and political alliances.

“I believe that a lack of knowledge of our history has contributed to this growing mistrust and sometimes disagreement between Africans living in South Africa and host communities,” he said.

“If people know their history, they will know where we are coming from and the objectives of our founding fathers who believed in one Africa and the spirit of brotherhood.

“Why do we have to be treated differently when we are from the same place [Africa]?” asks David Chigaru, a Malawian who has been living in South Africa for five years. “If you tell me to go back to my country, then you are not showing a good light.”

Muodum, meanwhile, says he hasn’t been affected by xenophobia, but agrees that it’s a sad reality that should be tackled. “The government is not doing enough [to end it],” he says. “When no one is arrested or prosecuted, it emboldens the perpetrators.”

He adds that many Africans see South Africa as a place to which they can move to do business and earn a living, but are sometimes frustrated with the treatment they receive.

However, despite the strain in relationships and the discrimination migrants face in South Africa, Olubajo is optimistic about stronger bonds. He says there is also love and unity among some locals and foreigners who became united through long-term friendships and marriages.

“They have integrated in such a way that it would be very difficult for us to leave,” he said. “If we don’t unite and fight all these issues such as discrimination and xenophobia, we will all be affected because our strength is always depleted when we are divided rather than united.”

Olubajo recommends that social cohesion programmes and initiatives such as music festivals and cultural displays should be promoted on the continent and “wherever Africans find themselves, even abroad”.

“We are able to integrate ourselves to benefit everyone — a single, united Africa will bring about progress for our respective countries.” DM