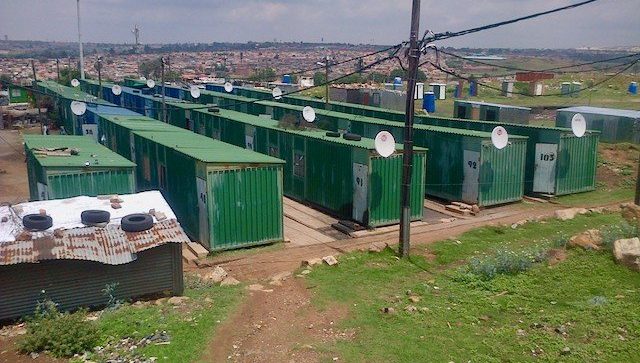 ‘Our daughters sell themselves to men just to get peanuts to provide for the family, while our sons venture into housebreaking, mugging and other forms of crime,’ said one hostel resident.

Stats SA hunger trends have emphasised how the hunger crisis in South Africa dates back to way before the Covid-19 pandemic but has since intensified for thousands of hostel dwellers living in some of the worst housing conditions, with the highest rates of unemployment.

Many hostel residents have been forced to migrate from their homes in search of work so they can provide for their families. Their failed attempts to get employment builds frustration and forces people to take desperate measures to survive.

Residents of Dube, Mzimhlophe and Nancefield hostels in Soweto have reported that their future is bleak and say that this will result in another hungry and frustrated generation that will grow up without motivation, education or hope. They say their inability to afford food has stripped them of dignity, making it difficult for them to reach their full human potential. With little to no help from the government, these Soweto hostel residents say they have seen a rise in hunger coupled with crime and violence.

A 63-year-old resident from Dube hostel, who identified herself as MaNtuli, said she’s been living in the hostel since 1995 and that she has never worked a day in her life, and nor has anyone in her family.

“I left home in Mtubatuba, KwaZulu-Natal in 1995 to get a job in Johannesburg. Then, my firstborn was seven months. Life was not ideal in the rural areas and I thought coming here to get a job would lessen the hunger burden in our family, but nothing has changed.

“Our daughters sell themselves to men just to get peanuts to provide for the family, while our sons venture into housebreaking, mugging and other forms of crime,’’ said MaNtuli.

Xolani Zwane (20), a resident at Mzimhlophe hostel, said he and his friends abuse substances, specifically alcohol, to numb their consciences so they can commit crimes to feed themselves.

“The situation at home is bad. My parents are old and have lost their jobs and the issue of food is a touchy subject. I can never say I’m hungry. It frustrates my mother who can yell at you for the whole day for just saying ‘ngilambile’ (I’m hungry). When I’m drunk I’m less hungry and can go and steal or commit any crime anywhere.

“I quit school because I can’t go on or concentrate on a hungry stomach and even my older siblings, who did well in school, are still sending their CVs with no luck, so our situation remains. Although being the youngest traditionally meant to depend on my elders, my stealing keeps us afloat. I provide for everyone with no questions asked on where the food comes from,’’ said Zwane.

Sibongile Mvelase, a resident at Nancefield hostel, said hostels are places of poverty and hunger and this has united them. He said hunger had brought the different ethnicities living together closer, as they share any food they have with neighbours so that no one dies of hunger.

“Hunger has no tribe, we are all hungry. The situation is deteriorating as more unemployed people (young and old) spread across the hostel. The devastating crime and violence associated with hostels is a call for help. Hunger is not a crime,’’ said Mvelase.

The experiences of the residents of Dube, Mzimhlophe and Nancefield hostels show that a lack of quality, affordable food for the most vulnerable in South Africa is a violation of people’s rights to a life of dignity.

As the South African Human Rights Commission asserts, “The right to food is a human right recognised under national and international law, which protects the right of human beings to access food and feed themselves, either by producing their own food or by buying it. The right to food is linked to one’s right to life and dignity.” DM/MC