‘Patients will die this week’

Fire and no water: Johannesburg’s hospitals are in critical condition and need urgent help 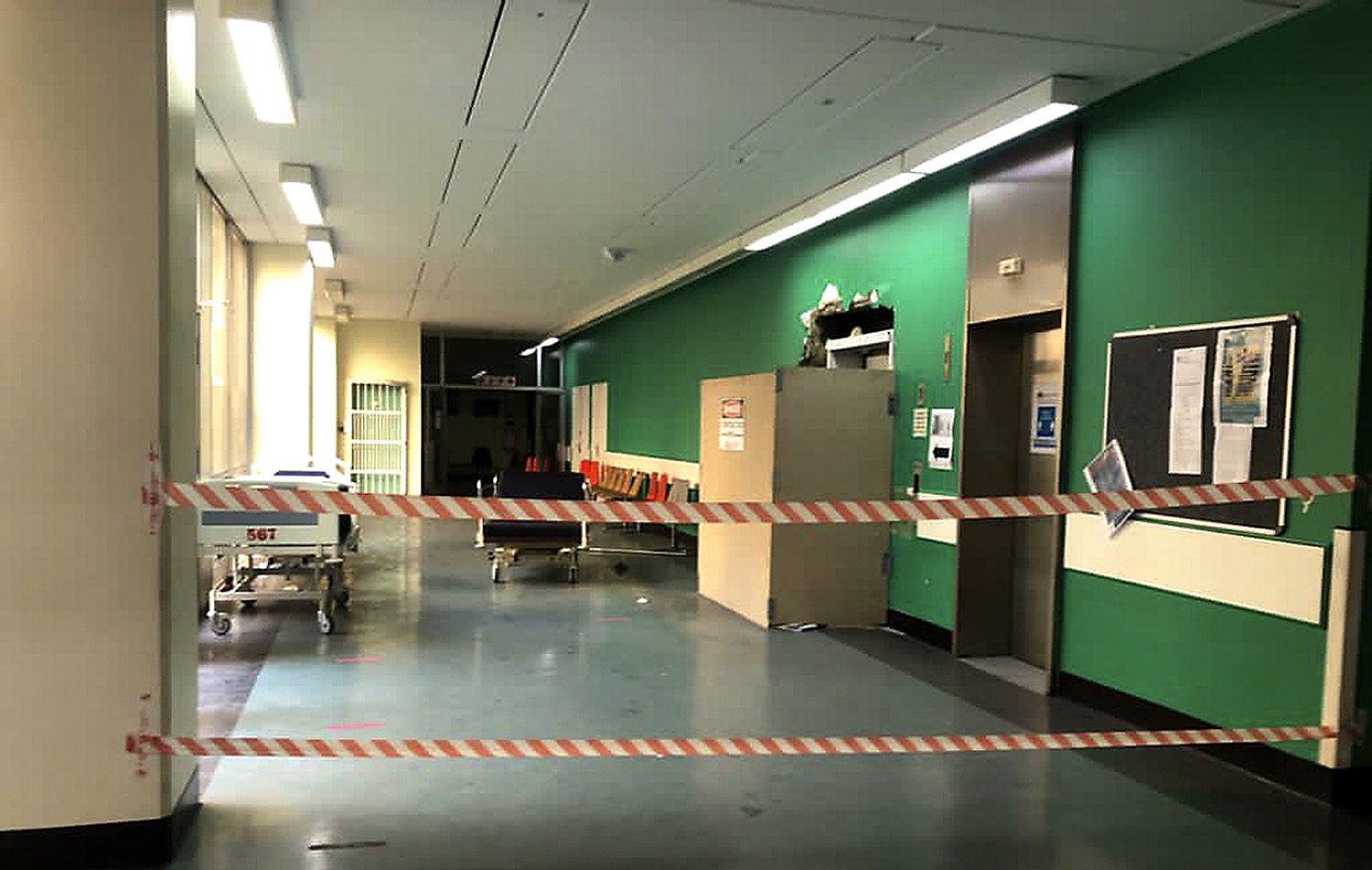 No go area and no sign of reconstruction at Charlotte Maxeke Hospital in Johannesburg. (Photo: Mark Heywood)

Johannesburg’s public health services are on life support and the prognosis is poor. There are no signs of urgency to bring Charlotte Maxeke Johannesburg Academic Hospital back online after a fire forced its closure. Not far away, both Helen Joseph and Rahima Moosa hospitals are operating under extremely difficult conditions as their water supply has been intermittent for days.

Charlotte Maxeke Johannesburg Academic Hospital (CMJAH) is one of the biggest hospitals in the Southern hemisphere. It was closed in April after a fire that originated in an underground parking area caused a section of the hospital to collapse, rendering the entire facility unsafe.

Since then patients and staff have been relocated to other hospitals in the province at considerable cost to the already overburdened health network.

The Gauteng health department (GHD) and the Gauteng department of infrastructure development (GDID) insist they are acting as swiftly as possible to reopen the hospital.

However, when Maverick Citizen visited the facility on Monday 24 May, there were no signs of work being done on the fire-damaged part of the building or of any urgency to get the hospital reopened.

At the moment, the only part of the hospital that is functioning is the laboratory services run by the National Health Laboratory Services, where it seems it’s back to busy business. The rest of the hospital is empty and ghostlike. Beds on trolleys line the corridors, the pharmacy is closed and the only staff are security guards wandering up and down.

Maverick Citizen visited the scene where the fire broke out in the basement. As our photographs show, the floor is still collapsed. There is no sign of construction or rebuilding. I also saw sections of the parking area that are illegally used for the storage of lawn mowers and flammable materials. It is alleged that PPE was also being stored in the basement prior to the fire.

There is no doubt that the blaze has cost an enormous amount in human and financial terms, and yet there still appears to be no official investigation into its cause. In that context, suspicions abound, including that the fire was deliberately set as part of a labour dispute.

On Monday, Democratic Alliance spokesperson Jack Bloom issued a statement which questioned the lack of urgency and accountability. Bloom said “the long waiting lists for ordinary surgery at CMJH are getting dramatically worse. This includes knee and hip surgery, and hundreds of patients waiting for cataract surgery to restore their sight.

“Cancer patients have been redirected to the Chris Hani Baragwanath Hospital for chemotherapy and to the Steve Biko Hospital for radiation treatment. This is not satisfactory as there are backlogs and delays being experienced. And sometimes the diagnosis has to be redone from scratch.”

His patients are people with long-term chronic conditions requiring ongoing treatment and monitoring. With haematology, he warned, “if you are given the wrong medication, you die; if you don’t receive your medicines, you die.” Since the fire, however, the clinic’s patients have been scattered across the province and he has limited access to their records.

Jacobson is also concerned that outpatients who come to the clinic at CMJAH are turned away and sent to other clinics without assistance or transport money.

Initially he begged to have his clinic reopened at the Nelson Mandela Children’s Hospital (NMCH), which is just down the road where he says there is unused space, including a pharmacy and laboratory. But this request has been refused, and “unjustly so”, he says.

But according to Dr Nkuli Boikhutso, clinical manager at the NMCH, their hospital has absorbed an extensive list of paediatric and specialist services: “Unfortunately we are truly unable to also accommodate adult patients. We need to prioritise children as a children’s hospital.”

So the anticoagulation clinic remains closed.

On Sunday, the Gauteng health department responded to our query about when the hospital would reopen – by referring us to the GDID. Bongiwe Gambu, spokesperson for the GDID, said: “We are working with COJ fire department to address all compliance matters that the city requires us to address in order to reopen. We are meeting and working daily. At this stage we are unable to confirm reopening.”

The pictures we took suggest something different.

Meanwhile, a few kilometers away, Rahima Moosa Mother and Child and Helen Joseph hospitals in central Johannesburg are facing debilitating water shortages that are a threat to life, dignity and the functioning of the facilities.

Both hospitals are currently under extraordinary pressure since they also accommodate patients from Charlotte Maxeke.

Rahima Moosa has 120 paediatric beds and most of them are full. Normally it delivers 12,000 to 14,000 babies per annum. That number has increased to 16,000 and, according to one doctor we spoke to, could exceed 22,000 this year in light of pregnant mums being redirected from CMJAH.

In this context, one doctor we spoke to said the water crisis “could not have happened at a worse time”.

During a visit to the bustling hospital yesterday, I spoke to nurses who lamented that they had been unable to wash children that morning, saying water cuts had been going on for days.

A frustrated doctor in paediatric ICU condemned the lack of urgency in resolving the crisis.

Outside the labour ward, a long queue of pregnant women sat on benches. The toilets were not working.

The cause of the water shortages appears to be an infrastructural one: according to a memo from the CEO of Helen Joseph, the Hurst Hill reservoir, which supplies the hospitals, has been affected by load shedding and cannot keep up with demand.

As a result, tankers are supplying water at both hospitals, but it is simply not enough. At Rahima Moosa, water flow depends on which floor you are on: operating theatres are on the fourth floor, the area where water pressure is weakest.

We saw one desperate message from a doctor at Helen Joseph:

“Renal is in crisis at HJH, there is no water and our chronic dialysis patients haven’t been dialysed in almost a week. We URGENTLY need a plan. We propose to have access to our HD machines from CMJAH and take them to Edenvale/Bertha (we need an area with taps) to set up a chronic HD unit. Patients will die this week.”

At Rahima Moosa, a doctor said: “We haven’t lost any babies yet, but this is only as a result of the enormous effort staff are making to continue to deliver services.

“We can’t shut a hospital,” he said, expressing a wish that there might be offers of help from private hospitals in the area.

He said he was worried that water shortages, combined with overcrowding, posed a real danger of an outbreak of nosocomial infections like klebsiella – a far greater danger to neonates than Covid-19. Gauteng has a tragic history of such deadly hospital-acquired infections.

Meanwhile, Gauteng is in the midst of a rapidly developing third wave of Covid-19. Cases at Helen Joseph have doubled from last week.

But while the province proudly boasts new facilities, such as the refurbished AngloGold hospital in Carletonville, the facilities in areas with the greatest population densities are drowning in neglect, indignity and interminable delays. DM/MC