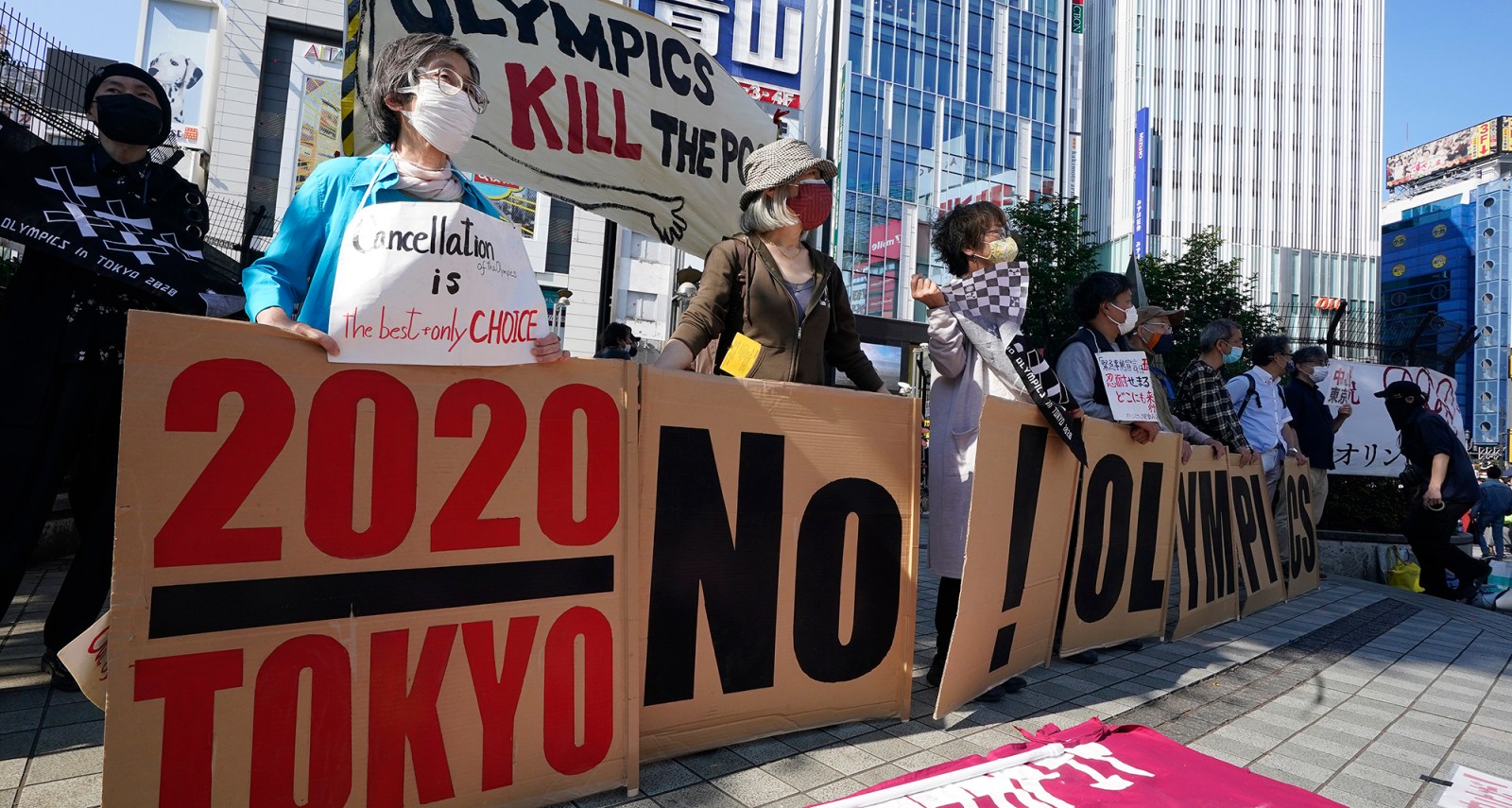 Protesters appeal to pedestrians during a demonstration against the Tokyo 2020 Olympic Games at Shinjuku in Tokyo, Japan, 23 May 2021. More than 80% of Japanese people want the Games cancelled or postponed, according to a TV opinion poll conducted in mid-May. (Photo: EPA-EFE / Kimimasa Mayama)

The spread of coronavirus in the US continues to slow, with the country ending its first week since June with no days of infections exceeding 30,000, according to data compiled by Johns Hopkins University and Bloomberg.

The US Centers for Disease Control and Prevention warned that under-vaccinated areas in the US could become hotspots for a mutation of the coronavirus first detected in India and is increasing surveillance of the more-transmissible variant.

The UK government pushed back on claims from the former chief aide of Prime Minister Boris Johnson that officials pursued a herd-immunity strategy in the early days of the Covid-19 pandemic.

California’s deaths dropped to 33 from 50 the day before. Cases rose to 1,308 from 1,186, a rate of 2.8 new cases per 100,000. California has administered more than 36 million vaccines in total. The state is preparing for its reopening on June 15, when it’s easing mask requirements and lifting capacity limits for most venues.

France reported the lowest daily increases in coronavirus-related deaths since October, in a sign that the pandemic’s grip on the country is loosening. The 70 additional fatalities registered over the past 24 hours bring the official toll to 108,596. France reported 9,704 new cases, about a third less than the seven-day average.

Covid profile changing in US

Falling hospitalisations from Covid-19 show a “rapidly declining vulnerability” in the US, as the people getting infected — sharply falling, but still averaging more than 25,000 a day in the past week — tend to be younger and less vulnerable to complications, said former FDA commissioner Scott Gottlieb.

Gottlieb said on CBS that many in the US are gradually recalibrating their approach to masks, social distancing and other measures as cases and deaths fall sharply.

“We need to make a judgment about what our comfort is. A lot of people have spent a year wearing masks and taking precautions, so it will take some time for us to get comfortable again going into settings without those precautions,” he said.

Texas Governor Greg Abbott said his decision to remove mask mandates and to allow businesses to open at full capacity as early as March was the “right move”.

“Of course, President Biden and the Democrats railed against it,” he said Sunday on Fox News. “Democrats said that I had issued a death warrant.”

New cases and deaths have been declining in Texas since March. Last week, the state reported zero virus-related deaths for the first time in more than a year. About 43% of the population in Texas has received at least one dose of vaccine, behind the U.S. average of almost 49%, according to Bloomberg Vaccine Tracker.

Italy on Sunday reported the lowest number of daily coronavirus-related deaths this year, according to Ansa. There were 3,995 new virus cases compared with 4,717 a day before and 72 deaths compared with 125 on Saturday.

New York state’s single-day positive test rate dropped to 0.77%, the lowest since late August, Governor Andrew Cuomo said in a statement. The state’s positive tests are among the lowest in the US, with a seven-day average of 0.92%.

Cuomo reported 1,073 new infections, in line with the dropping caseload, and 12 deaths. Hospitalisations continue to fall.

US outbreak continues to weaken

The US reported just over 18,700 new cases on Saturday, capping the first week since June with no days of infections exceeding 30,000, according to data compiled by Johns Hopkins University and Bloomberg. Average daily infections dropped to about 25,600, compared with almost 217,500 at the end of the first week that vaccines were rolled out in the US in mid-December.

A further 481 fatalities were recorded, capping a week with the fewest fatalities since the end of March 2020.

Norway has decided to set aside 500 vaccine doses for persons in socially critical functions, the government said in a statement Saturday. Members of Parliament, government and the health directorate are among those who will be prioritised.

The UK government pushed back on claims from the former chief aide of Prime Minister Boris Johnson that officials pursued a herd-immunity strategy in the early days of the pandemic. Dominic Cummings unleashed a series of tweets on Saturday criticising the UK’s response.

He said that letting enough citizens become infected to reach natural herd immunity was the “official plan in all docs/graphs/meetings” until early March 2020, when it became clear that such a policy would lead to catastrophe.

When asked about the allegations in an interview on the BBC on Sunday, Home Secretary Priti Patel said that was “not at all” the plan. Jenny Harries, chief executive of the UK Health Security Agency, also said it wasn’t the nation’s strategy.

Germany’s Health Minister, Jens Spahn, has promised a wide-ranging easing of pandemic restrictions during the summer if the country’s seven-day incidence rate falls below 20.

“Last summer the rate was below 20. We should aim for that again,” Spahn told the Sunday edition of Bild. According to the Robert Koch Institute, Germany has a seven-day incidence rate of 64.5. That means that there are 64.5 new infections per 100,000 individuals over a period of seven days.

Federal health officials are ramping up their surveillance of the highly transmissible Covid-19 variant first identified in India, as experts warn that under-vaccinated areas in the US could become hotspots for the mutation.

While US cases attributed to the B.1.617 variant currently sit below 1%, the growth rate remains unclear due to the small sample size. One science group said the strain could be as much as 50% more transmissible than B.1.1.7, the variant that emerged from the UK. That mutation was first seen in the US in late December and is now dominant nationally.

India cases lowest in more than a month

India’s new coronavirus cases continued to slow, with a daily total of 240,842 on Sunday, the lowest in more than a month. Meanwhile, India’s capital extended its lockdown until 31 May as it halted vaccinations of people aged 18 to 44 due to a shortage of jabs. India and scores of other World Trade Organisation members made a fresh appeal for a three-year patent waiver on products and technology used in the treatment of Covid-19, the Economic Times reported.

The US Centers for Disease Control and Prevention is investigating “relatively few” reports of a heart problem in adolescents and young adults after a Covid-19 vaccination.

A report from a meeting of the agency’s safety group on May 17 said that most discovered cases of myocarditis “appear to be mild” and could be unrelated to vaccinations. Myocarditis is an inflammation of the heart muscle often found after an infection.

The cases were mostly in adolescents and young adults and more often in males than females. The report added that the cases occurred more often after a second dose than the first and were typically found within four days after infection. DM