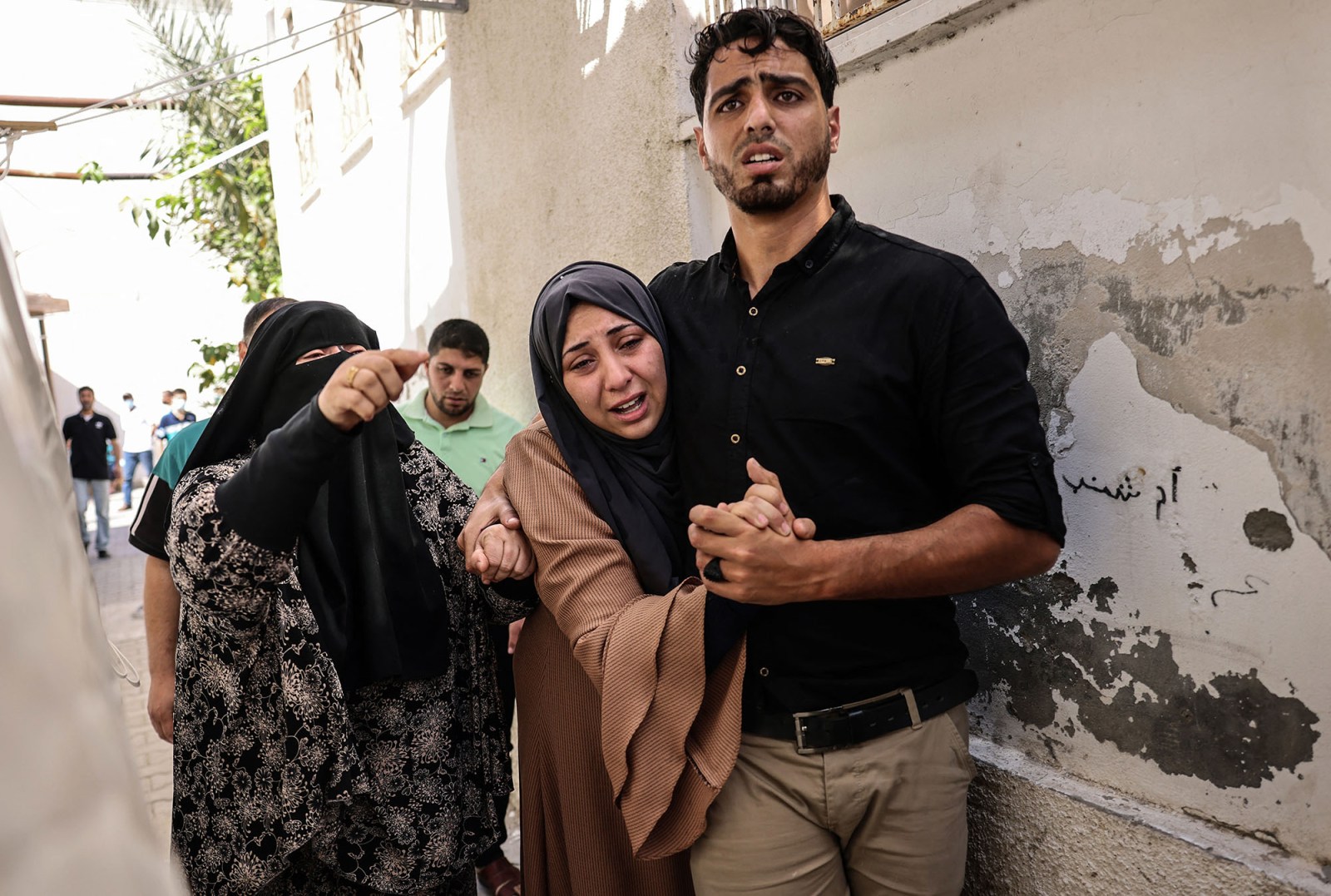 Relatives mourn the death of two members of the Palestinian Alrantisi family, killed in an Israeli air strike, at their funeral in Rafah in the southern Gaza Strip on 14 May 2021. (Photo: Said KHATIB / AFP)

Over 600 South African health workers, including 450 medical doctors, health professionals from many fields, academics and medical students have signed a statement of solidarity with the Palestinian people.

On March 23 last year, in the early days of the Covid-19 pandemic, UN secretary-general Antonio Guterres told a video conference, in which he appealed for a ceasefire in all military conflicts, that “The fury of the virus illustrates the folly of war” and that it was necessary to “End the sickness of war and fight the disease that is ravaging our world.”

He was not listened to and the folly and fear of war have never been more evident than in the current assault on Gaza and Hamas. Fortunately, a ceasefire came into effect last night. According to the New York Times on Friday: “The Israeli campaign has killed more than 230 people in Gaza, many of them civilians and children, and badly damaged infrastructure, including plumbing systems, the electrical grid, hospitals, schools and roads. Rockets fired at Israel from Gaza have killed 12 people.”

In this context, more than 600 South African health workers this week signed a statement of solidarity (here) with Palestinian people. Signatories include Professor Glenda Gray, President of the South African Medical Research Council and Prof Ames Dhai, the former Director of the Steve Biko Centre for Bioethics at the University of the Witwatersrand, and Prof Yusuf (‘Joe’) Veriava, who in 2019 was bestowed with the Order of Luthuli in Silver for his contribution to the medical profession in South Africa.

The health professionals’ statement says that “Our lived experience in South Africa under the apartheid system which was a crime against humanity, and our medical ethical duties have obliged us to stand up again for the humanitarian cause of the Palestinian People who are oppressed by apartheid Israel.”

The statement alleges that Israel has violated medical neutrality and the Geneva Conventions, by blocking ambulances from reaching wounded patients in the Sheikh Jarrah neighbourhood.”

“The principle of ‘do no harm’ which has histories in Jewish and Islamic, as well as Chinese and Indian medicine was violated when Health facilities in Gaza, including a Medecins Sans Frontieres clinic were struck and damaged, and when the main road to access Al Shifa hospital became virtually impassable due to bomb craters. On the 15th May 2021, our colleague, Dr Ayman Abu Aloof, the head of the Internal Medicine Department at Al Shifa hospital and head of the Covid-19 response was killed by an Israeli airstrike on his home.”

The letter draws parallels between the health policies practised by apartheid South Africa and Israel, through the segregation of health facilities and the differences in quality and access to health facilities for Israelis and Palestinians.

The statement also mentions how Israel has “violated international law” with its Covid-19 vaccination campaign which has led the world for Israeli citizens, where over 10.5 million doses have been administered to 56% of the population; but denied vaccination to the vast majority of Palestinians, where only 4,2% of the population have received vaccines (see Our Word in Data, updated two days ago).

This is an issue that has attracted international condemnation, including by the UN Office of the High Commissioner for Human Rights which in January this year released a statement by UN Experts calling on Israel to ensure equal access to Covid-19 vaccines. Vaccination apartheid has also been condemned in correspondence to the prestigious medical journal, The Lancet and this week the American Public Health Association issued a similar statement for sign-on by health workers in that country.

In this context, the letter says that “apartheid Israel must also be held accountable for the longer-term devastating effects its policies have on the health of Palestinians” and calls for academic institutions, to which many of the signatories belong, to cut all ties with Israel.

Dr Natalya Dinat, a veteran health activist and one of the organisers, told Maverick Citizen she was surprised how quickly signatures came in and that the list is still growing. She says that it has been communicated to health workers in Palestine and warmly received. It has also been handed over to the Palestinian Ambassador in South Africa.

Maverick Citizen contacted Wits University to establish their response for the call that all ties be severed with Israel but had received no response at the time of publishing. The University of Cape Town issued a statement this week (available here) that “reaffirmed UCT’s commitment to academic freedom but reserved the right to dissociate itself from those academics and academic institutions that support (directly or indirectly) the violation of human rights and/or enable the violation of human rights.” DM/MC