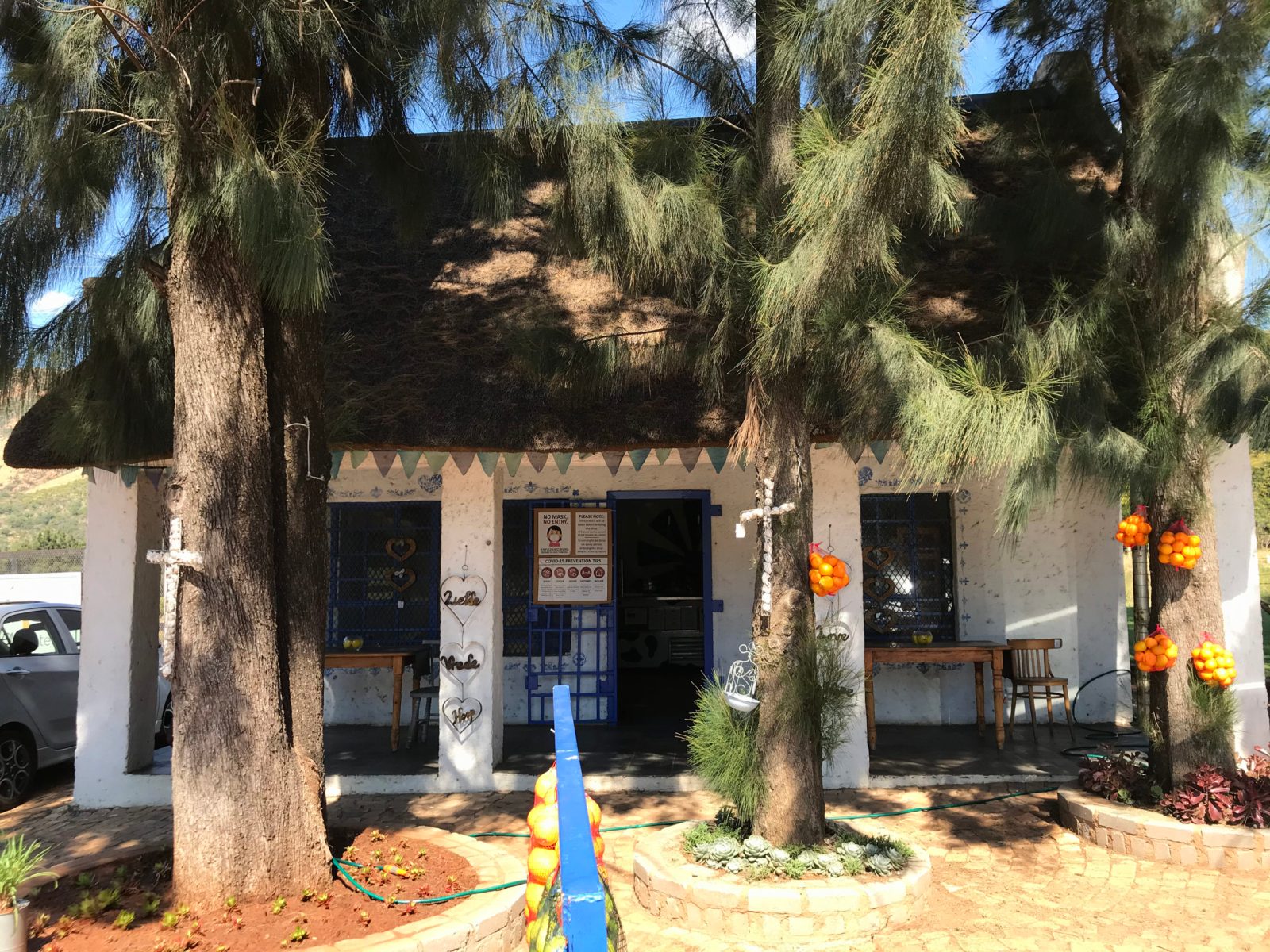 Rex Union oranges are prized for their unique flavour and history, adding zing to gin and marmalade.

It’s almost once upon a time, where a fairytale gingerbread house marks the entrance to an enchanted valley. Golden orbs dangle from branches here. Called Lemoenfontein, delightful images of fragrant orange drops lit by playful sunbeams are conjured.

Tucked into a strange corner of the world, we’re suddenly no longer in Gauteng but in another province, North West, a mere 146 kilometres from Jozi.

Here is soft straw underfoot and the over-hundred year-old Rex Union trees stand out against the pretty-prettiest, curl-swirled top of Mogale’s berg, under a touchable blue sky. When you know that Mogale or Mwali is the queen of heaven and earth in African cosmology, the magic of expectation and experience here is even more intensified. Just be prepared for another potential prince in the piece.

On our Melville neighbourhood WhatsApp group a year ago someone posted the availability of a few Rex Union oranges. I thought that was pretty exciting, under the impression that they were rare but not even sure they were local. I was right about the former.

Someone else replied to the post, saying she’d take some only if they were “sweet and juicy because I can’t find oranges that are nice and sweet any more”. I messaged and said she’d be disappointed because they were not sweet, not really eating oranges, hoping a marmalade maker would get them instead.

Now I’ve tracked down the “oranges”. They’re very local and they’re just coming into full ripeness before me, big and unusually ovoid. I realise this is a precious piece of Rex Union real estate. JC Van der Berg does too.

He’s the manager of Lemoenfontein. Watching oranges grow is by no means the only part of his business. However, he has a wry interest in these exceptional fruits. He tells me that the people with the most interest in these oranges and make the trip here “to see the trees” are, and here he looks at me carefully first, “just English people, you know, the old ones. One was 92 years old”. She’s almost as old as these trees, I think, studying them.

George Wellington Rex was often reckoned to be one of the royal illegitimates that were sent out to the colonies, as was the sister, also called Vicky, of the Victoria that came to be the British queen. Whether he was princely or not, he is credited with founding Knysna and had a farm up here called Dunedin, the Scots gaelic name for Edinburgh. It is now Lemoenfontein.

The farm up here was granted to Rex from land on the Afrikaner president’s farm, Boekenhoutfontein. I wonder if they met? Kruger was old by then.

At any rate and whether he loved a scrape of marmalade in the morning or not, Rex himself crossed the huge pomelo, the Citrus maximus with the Seville, Citrus aurantius. In 1905, he planted these citrus plants, more grapefruit than orange.

There’s always a bit of confusion with citrus because of the names. In Afrikaans, a grapefruit is called a pomelo. Grapefruits themselves are crosses of the pomelo (maximus) and sweet oranges (Citrus sinensis). Don’t get me started on another favourite citrus, the citron, misnamed, misspelled and misunderstood across a few languages. Things simplify with citrus when you realise there are really only three basic plants from which all the others have come.

JC says there are today 300 flourishing old Rex Union trees. In addition to the “old” visitors, he also says the Slow Food movement was quite involved in saving the trees some years back when they were in danger of being lost, especially with their annual fundraising picnics. I know some much younger people from there, like food editor Hilary Biller, who happens to make marmalade too. She waxes romantic about the fragrance of the skin of Rex Unions. I know exactly what she means.

Hilary tells me there’s another Slow Food picking picnic coming up on 4 June.

Out here, among these citrus trees with such a fairytale past, I smell the leaves and, like Hilary, the flesh. It is exquisite. The soft straw I stand and sit on, JC says, is really here to prevent weeds from coming up because they don’t spray here for those.

What had happened in the intervening years, like in 1930, was that someone had sent a cutting or two to California, thinking it was a cross of nature. There was a little discussion then and some history of the Rex Union was uncovered. However, as JC says, “Rustenburg lost interest in the trees and they were neglected.” No longer.

A very groovy distillery called Primal Spirit in Jozi’s Victoria Yards today buys some of the rare Rex Union harvest and makes UNION gin. It’s become a sought after taste and the oranges are intrinsic to the product instead of just being a botanical flavouring, as with many gins.

In April, while oohing about inspired food at the super-cool bar SIN+TAX (here), we mentioned one of the very talented bartender-owners, Julian Short. I see he has for a while been collaborating with Primal to create REX, a Rex Union aperitif, using the eponymous fruit and “zest sweet-sour kumquat”.

JC lives in the old stone Rex House and his sister Nadine manages the gingerbread-looking, gabled padstal at the entrance to the farm.

The padstal sells Rex Union marmalade of course and Nadine makes it but dislikes the bitterness of marmalade intensely. “And I’m not a jam artist – it burns my hands!” She explains that her marmalade is a little more liquid than usual though she uses an ancient farm recipe. I buy some to try. The little shop is warmly aromatic with fresh-baked goods like biscuits and fudge. Outside the shop, other citrus grown on a small scale on the farm, already hangs in bags, jewel bright.

It is true that general tastes for marmalade tend to be sweeter now, more American in sugar content tastes. I think back to the stuff we kids had in England, Roses Lime jelly and Roses rather sweet Orange Marmalade. Bitter, thick-cut Seville marmalade was a welcome delight after those. There are not enough Rex Union trees to support “general tastes” anyway. Why should we worry?

Rex Unions are not “sweet and juicy oranges”. They are unique and rare and local. Luckily, not-so-general tastes are like that too, as Primal Spirit’s distillers will say. I have found, at Melville’s Service Station, a jar of Rex Union marmalade made by them too. I haven’t tried it but it looks darkly promising and the back label has, under Ingredients: Rex Union Oranges, Sugar, Water.

Being a part of, even witness, to the continuation of Rex Union is an almost impossibly lovely chance for the nearly impossibly local citrus to delight us, to flourish ever and evermore in its fairytale place of marmalade fruitfulness. DM/TGIFood