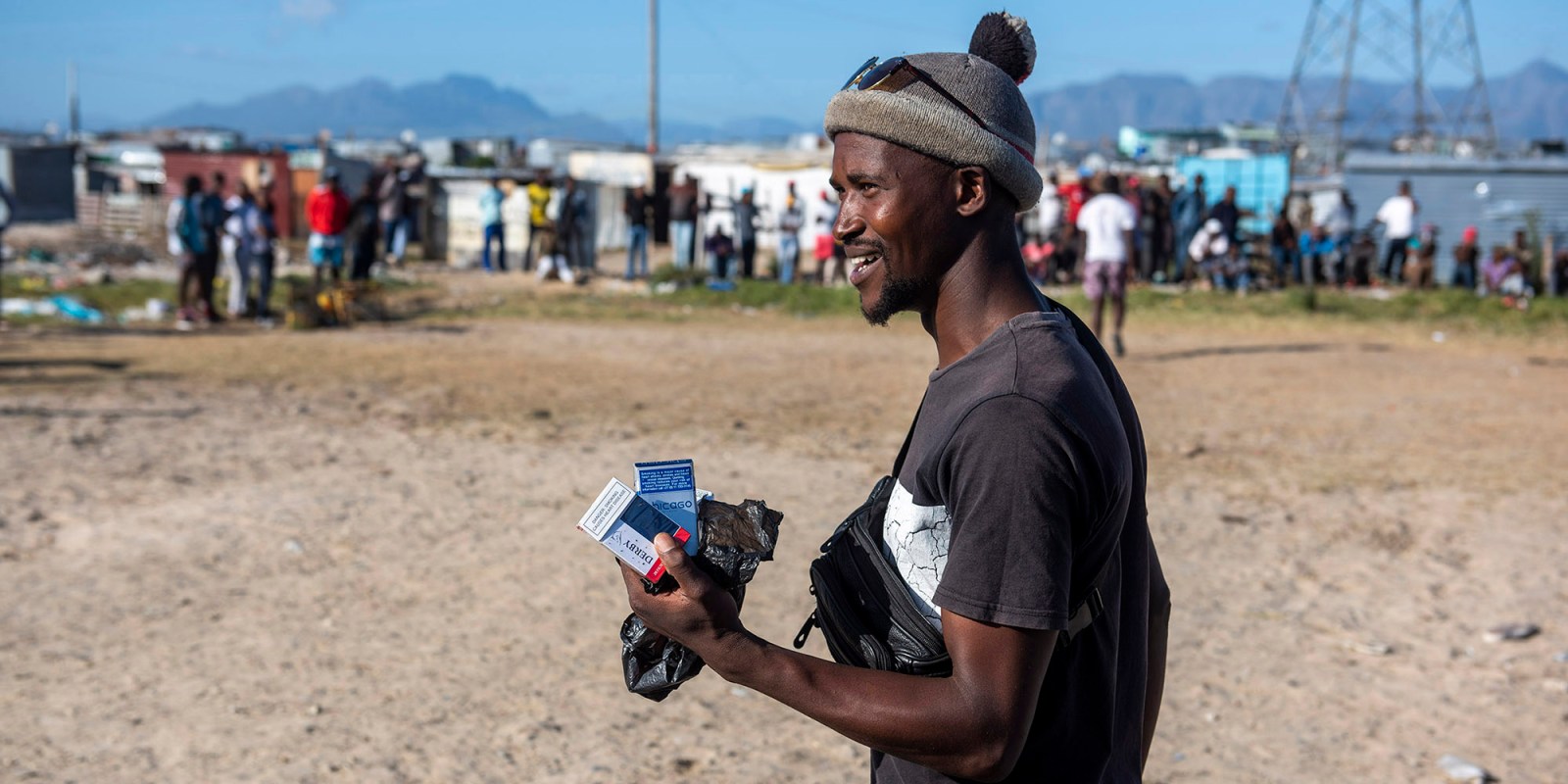 Many of the business practices employed in the informalist — as opposed to informal — economy evolve into illegality. Through picking and choosing the regulations that suit them while ignoring those that do not, informalist economies pose important risks to consumers and society at large, taking advantage of a weak state with low regulatory enforcement.

Leif Petersen is Co-Director of the Sustainable Livelihoods Foundation.

South Africa’s economy has always hosted many informal businesses — our historic work in townships reveals much of this activity such as street trading, grocery and liquor retailing, and traditional healers who are showcased in our new book “Township Economy — People, Spaces and Practices”.

However, in the past few years, we have observed a marked transition of certain types of informal businesses from being economic survivalists trying to get by, into something we now describe as “informalist” behaviour. Informalist entrepreneurs, in short, are not necessarily “poor” in the general sense, but rather seek to capitalise on opportunities that informality presents and exploit weaknesses of the state to generate business for themselves.

Many of their business practices evolve into illegality. Through picking and choosing the regulations that suit them while ignoring those that do not, informalist economies pose important risks to consumers and society at large, taking advantage of a weak state with low regulatory enforcement.

The informalist is now prominent in certain township sectors such as spaza shops, liquor retailing and minibus taxis, but also increasingly in the suburban context — such as delivery driving. We argue that the growth of informalist business practices represents a profound development challenge that will require determined and specific approaches to rein in.

Over the past decade, the township spaza shop sector has undergone a massive transition from one of poor and survivalist businesses into, as evidenced by our nationwide research, an industry dominated by increasingly “informalist” entrepreneurs who have adopted widespread strategies of labour exploitation, and trading in contraband and counterfeit goods. For those individuals capitalising on these practices, the 2020 tobacco ban presented a once-in-a-lifetime business opportunity in trading contraband cigarettes.

Early in 2021, the extent of the tobacco ban on encouraging illicit trade was shown, with Ipsos market research based on mystery shopping in 3,700 stores (many of which were spaza outlets) in various provinces. Ipsos learnt that nearly three quarters (74%) of retail outlets in Gauteng, Western Cape and Free State are now openly selling illegal cigarettes for as little as R6 a pack. We know this is illegal, as the minimum collectable tax on such a pack (determined by the National Treasury and payable to SARS in the form of duties and VAT) is R21.61.

Ipsos further learnt that illicit products are ubiquitous, with various brands literally only found at illegal prices. These findings are striking, but not surprising, and confirm our own insights that the nature and scale of the illicit cigarette trade have not only continued since the time of our research (2017-18), but since the lockdown and tobacco ban, has substantively grown.

This transition to illegality is driven by basic economics whereby cigarette consumers are (rationally) drawn to cheap and available products, and when legal supply chains were suspended through the tobacco ban, informalist cigarette producers, distributors and retailers simply captured this market for themselves — selling for up to R150 per pack at its peak in mid-2020.

Township residents access commercially and legally produced liquor through more than 100,000 largely informal and unlicensed shebeens nationwide. In fact, many of South Africa’s predominant liquor producers (and its JSE investors) are effectively reliant on such township trade as an outlet for the bulk of their production — effectively endorsing much informalist behaviour when it comes to bolstering profits.

Many township liquor retailers want to formalise operations and legitimise their business in order to reduce the risks of trading illegally, including raids, arrests, stock confiscation and prosecution. However, due to the practical challenges of regularisation for many township businesses (such as the inability to produce a title deed or achieve land-use zoning requirements) this is an unattainable goal. Many instead operate on informalist principles and have adopted business models that capitalise on illegal after-hours or credit sales, and/or choose not to enforce minimum standards (age restrictions, behavioural guidelines and so on).

Furthermore, we learnt that since the application of the Western Cape Liquor Act (2010) increasing numbers of these businesses have become retailers of illicit concoctions. These concoctions are commercially brewed in the formal sector on wine farms and industrial parks with leftovers from the wine sector and are blended with ethanol. Sold in five-litre bottles with a similar alcoholic content to wine, these products are cheap and increasingly commonplace in township liquor retail.

Capitalising on regulatory loopholes and lax law enforcement, the manufacturers of these products intentionally evade the taxation net by operating in informalist ways — willingly breaking the law in the production and trade of such products. Similar to tobacco, under the lockdown liquor ban these products made large gains in popularity due to their low cost, high alcohol content and (relative to beer) ease of concealability from the police.

A review of the business practices of the minibus taxi sector provides another example of an industry that actively embraces informality to evade regulation. In recent decades this sector has become an impenetrable, concentrated and politically powerful network. It operates local and regional transport services largely beyond the control of state authorities, picking and choosing the elements of formality that suit its operations, and generally ignoring those that do not.

The small network of taxi bosses who dominate in the sector operate a seemingly parallel system to state public transport in a strictly enforced hierarchy that involves extortionate membership fees, informally determined and enforced routes and territories, intimidation, threats and violence.

The taxi drivers serve at the coalface of the business, tend to earn the least money and carry most of the personal risks. A consequence of these poor work conditions is that many drivers are compelled to fill taxis to capacity and find ways to collect additional passengers on the road to “top up” their income.

Perhaps coincidentally, but since the advent of Covid-19, the minibus taxi sector appears to have moved into a higher gear of lawlessness. Shootings of taxi owners are again on the rise, and vehicles paid to be decommissioned by the state appear to be finding their way back on to the roads. As the taxi sector has long embraced informality, the sector is valuable in showcasing how a future South African economy could look outside of legal norms and standards.

Satisfying the consumer demands of the middle class of South Africa are increasing numbers of online businesses that conveniently deliver goods and food to your door. Yet, with this growth, we have also seen the rise of informalist behaviour by these services.

In this case, clever legal tactics have allowed for national and international corporate businesses to hire these “independent contractor” drivers as their distributors while at the same time carrying virtually no responsibility for them. Driver incomes are low (commonly less than R5,000 per month) meaning that the majority are too poor to buy or maintain their own transport. Instead, many rent the cheapest available motor scooters — many of which are clearly unroadworthy and at the end of their operational life.

Yet the business model that holds this “gig” economy together relies on capitalising on the unequal status of migrant workers and unroadworthy bikes in employment models that effectively absolve their “employers” from legal responsibility for them. The real-world consequences of this legally sanctioned informalist economy include not only the cheapest possible consumer items but untold motor accidents and the deaths of at least 70 delivery riders on South African roads in 2018/19 alone.

Informalist business behaviour occurs throughout South Africa’s economy every day, and as time goes by we increasingly rationalise this as “normal”. From the perspective of poor, marginalised businesses, there must be a regulatory approach that empowers and supports, but conversely, there must also be limits to capitalising on informalist behaviour.

The normalisation of informalist business practice emboldens those who perform commonly illegal or socially undesirable deeds — whether it is trading untaxed tobacco, illicit liquor production and retailing, minibus taxi driving or delivery drivers on smoke-belching scooters.

In various cases, it is not the business itself that is illegal, but rather its actions and business models that clearly embrace informality. Yet quite practically the negative social impacts of this could be reined in, for South Africa has the agencies (SAPS, SARS, Customs, municipal inspectors), mechanisms (laws, licensing, taxation), and tools (inspectors, traffic police, technologies) to deal decisively with this emerging economic trend. What is required is the political will to make it happen.

Using these tools, the time for a government response is now, for if this is not forthcoming it will send our economy, rule of law and society down a path of entrenched lawlessness from which we may never recover. DM