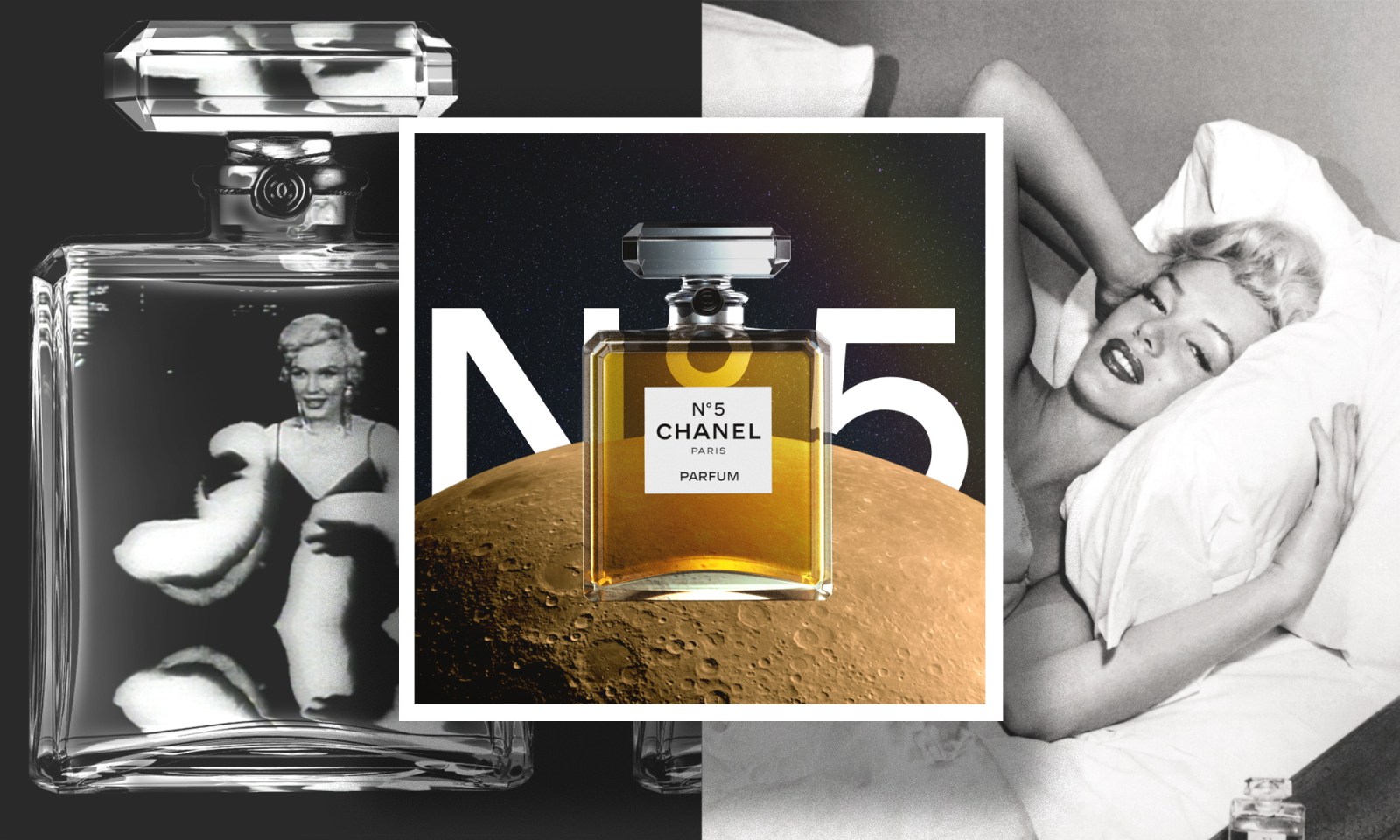 Its scent has travelled from Paris to the hills of the South of France to Hollywood and beyond; it has kissed the skin of Marilyn Monroe, Lauren Hutton, Brad Pitt and Catherine Deneuve, and many more people around the globe. Its name? Chanel N°5. The iconic fragrance turns 100 this year.

In 1921, the year N°5 was created, Gabrielle “Coco” Chanel was 38 years old and already a celebrated name in fashion; in the past 10 years she had transformed her small milliner boutique into an influential prêt-à-porter boutique located on Rue Cambon, Paris, a stone’s throw away from the Place Vendôme (it was initially called Chanel Modes before being renamed Gabrielle Chanel); she had been creating pieces that were at once revolutionary, visionary and liberating; her style (and her attitude) shattered sartorial and social conventions in vogue at the time, cutting through corseted and stiff dresses to create more sporty and elegant silhouettes; in 1921, Chanel is already synonymous with effortless chic, a je-ne-sais-quoi wrapped in simplicity, relaxed masculinity and subtle womanliness.

Gabrielle Chanel was a chic maverick and a brilliant – if not a tad excessive – storyteller; she was infamous for inventing stories in which to wrap an otherwise sadder and more sombre reality: At the death of her mother, her father dropped her and her sisters at Aubazine, in the Correze region, an orphanage led by nuns, and yet, as Susan Goldman Rubin, author of Coco Chanel: Pearls, Perfume and the Little Black Dress, explains, Chanel preferred another version, telling that “her father took her to stay with unmarried ‘aunts’ who always dressed in grey and black”.

“‘My aunts were good people, but absolutely without tenderness,’ she would say. ‘I was not loved in their house.’ She told the girls at the orphanage that her father had gone to America to seek his fortune and would come to get her as soon as he was rich. But in reality, after he dropped her off, Coco never saw him again.”

She was also an insatiable and passionate amoureuse: Two years earlier, in 1919, she had lost her love, Boy (Arthur) Capel, a married British businessman who had funded the opening of her first boutique (she eventually paid back all the money he had lent her). He died on 22 December 1919 in a car crash. Years later she would say: “When I lost Capel, I lost everything.”

If indeed, that night, she lost her love, she did not lose her ambition.

In 1921 Chanel travelled to Grasse for a holiday on the Côte d’Azur. Since the 18th century the little town had been home to some of the most famous parfumeurs in the world – perfume makers, flower farmers, producers and creators of extraordinary scents. It is there that Galimard opened its doors in 1747, supplying “the court of Louis XV, ‘the well-beloved’, with olive oil, pomades, and perfumes”. In 1849, the Maison Molinard established its laboratory in the town, growing on the hills just north of Nice, Rosa centifolia, violet, tuberose, Jasmine grandiflorum, iris or orange blossom.

And a century later, most fashion houses would be exclusively growing the flowers for their perfumes in Grasse, the topography of the town, its rich soil and the Mediterranean weather making it the perfect place to cultivate extraordinary flowers; and in 2018, Unesco awarded Grasse Intangible Cultural Heritage status, a celebration of the region’s artisans and producers’ treasured savoir faire.

It is there, under the Maritime pines, on the rolling hills of l’Estérel, that Coco Chanel met Ernest Beaux, a Russian-born French perfumer and a “nose”. Like her, Beaux (in French, the plural for “handsome”) was charismatic, sophisticated and a hedonist. At the time, Chanel was inspired by the Russian wave, hosting intimate salons with, among others, Russian composer, pianist and conductor Igor Fyodorovich Stravinsky and founder of the Ballets Russes, Sergei Diaghilev. Beaux, perfumer to the court of the Czars, matched her taste.

When she met Beaux her idea was clear: She wanted a perfume that would embody the sway of the Chanel brand, but more so, she wanted “a woman’s perfume with the scent of a woman”.

To understand the scent she was after and what inspired her, one needs to look at the designer’s past, back at the orphanage. Says Goldman Rubin: “The nuns’ cleanliness and stark simplicity pleased Coco. Fresh linens piled in high cupboards and the smell of the yellow soap the girls used to scrub their faces left lasting impressions. The geometric loops in the stained glass windows suggested interlocking Cs,” which would become the brand’s iconic logo.

That scent should be like nothing else created before, and so Beaux set to work, seeking “inspiration inside the Arctic Circle, in the crisp chill off the northern lakes of the midnight sun”.

Beaux presented her with different elixirs, each one in a numbered glass bottle; the legend says that it was the bottle N°5 that “broke all the fragrance rules” and took Coco Chanel’s heart; or maybe it was that five was her lucky number, a prime number and a symbol of balance; or that in astrology the fifth house is the house of Leo, her zodiac sign.

N°5 was born, made of 80 scents, among which “May Rose, Haitian Vetiver, Ylang-Ylang, Sandalwood, orange Blossom, Neroli Essence and Brazilian Tonka beans”, (to this day the formula of N°5 remains a sealed secret) when perfumes in vogue at the time were usually composed with one single flower, a strong note that took over the scent. That, and the aldehydes (synthetic components) Beaux added to the elixir.

Complex, layered, mysterious, undefinable, elegant – it was, after all, what Chanel had asked for: A perfume that didn’t smell like a rose, but instead, the scent of a woman.

Sixteen years after the creation of N°5, Gabrielle Chanel would pose for Harper’s Bazaar at the Ritz, the “face of her own fragrance”; that same year, she would make the suite of the five-star hotel her permanent residency, living there until her death, in January 1971.

But it is Marilyn Monroe who, responding to the question of a journalist who pondered what the American actress wore to bed, said, “Just a few drops of N°5”, and sealed the fragrance’s iconic status, if not for eternity, for 100 years to come. DM/ML