Naturalised citizenship in SA limbo land: Not today, tomorrow or the foreseeable future 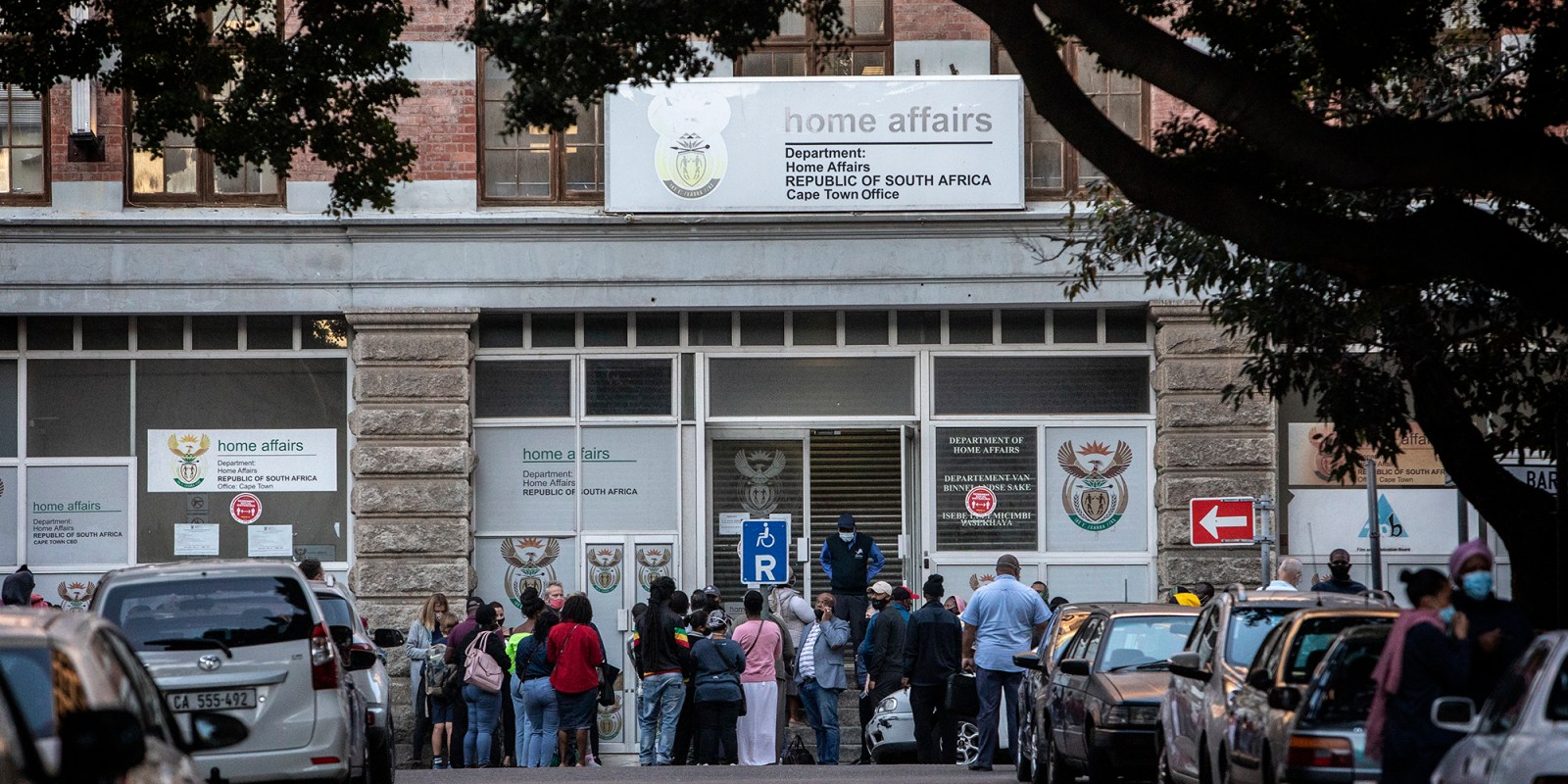 People line up outside the Department of Home Affairs in Cape Town on 3 May 2021. (Photo: Leila Dougan)

While SA navigates through the pandemic, the Department of Home Affairs has opened and closed the doors to some of its services, citing the protection of its staff’s health.

Petra Marais is an attorney at the Legal Resources Centre, and previous Bertha Justice Fellow. Her work mainly focuses on education and the rights of asylum seekers and refugees, specifically in accessing quality education in South Africa in a manner that does not unfairly discriminate.

Dr Charlene Kreuser is a candidate attorney at the Legal Resources Centre. Her work primarily focuses on removing barriers to accessing the right to education, particularly in relation to LGBTQI+ learners. Her interests lie in children’s rights, education, and non-discrimination.

In the legal sense, citizenship means being recognised by the law of a specific country as a member of that country. Beyond the formalities, there is the personal aspect of citizenship – the deeply rooted sense of belonging. Citizenship by naturalisation, regulated by section 4 of the South African Citizenship Amendment Act, recognises and celebrates this sense of belonging by bestowing citizenship on persons not ordinarily entitled to it by descent.

Section 4(3) provides that children born to non-citizens, who are not admitted for permanent residence, qualify for citizenship if their birth was registered, and they have lived in South Africa from birth until they are 18 years old. Since coming into effect on 1 January 2013, persons qualifying for citizenship by naturalisation under this section have faced several barriers as the Department of Home Affairs interpreted this section to only apply to children born after 1 January 2013.

This interpretation was challenged by six individuals represented by the Legal Resources Centre (LRC). In 2018, the Supreme Court of Appeal confirmed the retrospective application of section 4(3) in the judgment of Minister of Home Affairs v Ali. Importantly, the Supreme Court of Appeal also ordered the department to accept applications for citizenship under section 4(3) on affidavit until the minister has promulgated regulations.

After four years of litigation, the Miriam Ali applicants finally signed their citizenship declarations a few days before South Africa went into lockdown in March 2020. The national lockdown essentially left the applicants in limbo as they were not issued with identity numbers and identity cards after signing their citizenship declarations. Over the past year, these individuals were citizens without proof, complicating their access to higher education and employment.

On 5 May 2021, more than 14 months after being declared citizens, the applicants finally received their identity cards, thereby cementing their citizenship and ending a long, arduous journey for these individuals. For other persons similarly placed as the litigants, the end is nowhere in sight.

While the country is navigating through a pandemic, the Department of Home Affairs, being the custodian of citizenship in South Africa, has opened and closed the doors to some of its services, citing the protection of its staff’s health – a valid concern. However, to date, the citizenship division within the department has not reopened.

Recently, the minister of home affairs was asked what medical, scientific and/or Covid-19 risk evidence exists that justifies the continued closure of the citizenship division, while all the department’s other functions have reopened. The minister’s response was that, because many staff and clients were infected during the second Covid-19 wave at the department’s offices, “key services” are being prioritised.

The minister further explained that, from time to time, the department reviews the situation with input from the National Coronavirus Command Council and that citizenship services are considered as part of pending services to be reopened. Considering the Ali case, this is not the first time that citizenship by naturalisation has been made to take a back seat by the department.

It is concerning that the citizenship division is one of the very few civic services that remain closed, with no indication from the department as to when these services will resume. It is also alarming that citizenship services are not deemed to be “key”, given the importance of citizenship in accessing a range of rights in South Africa, as well as promoting a sense of belonging for individuals who know no other home.

Since the closure of the citizenship division at the end of March 2020, numerous individuals have contacted the LRC stating that they have tried to submit applications for citizenship by naturalisation, but have been turned away. As a result, the LRC recently addressed two letters to the department requesting the commencement of citizenship applications – neither letter was acknowledged.

One of our clients, Dali*, was born in Cape Town in 1999 to two refugees from the Democratic Republic of Congo and has lived in South Africa with her parents her whole life. Dali has known no other home and meets the requirements of section 4(3). She approached the LRC at the start of March 2021 for assistance in applying for citizenship. The department had been refusing to assist her throughout 2020.

The LRC assisted Dali with drafting her affidavit and at the end of March she attempted to submit her completed application. However, she was told that the citizenship division is still closed. Dali is, understandably, frustrated and says that “having citizenship in South Africa would actually make my life easier when it comes to studying further and gaining access to bursaries. I would also be able to travel and work without any worries.”

The passivity of the Department of Home Affairs with regard to citizenship by naturalisation is further illustrated by the department’s failure to update its website to reflect the route of citizenship through section 4(3) since the Ali judgment in 2018. The Department of Home Affairs has also failed to promulgate regulations within the stipulated time frame as per the Supreme Court of Appeal judgment. The draft regulations were published for public comment during July 2020, and one can only hope that the final regulations will be a far departure from the draft, which went beyond the ambit of the Citizenship Act.

For Dali and other persons who qualify for citizenship by naturalisation, submitting their application to the department is merely the first step to a process that will certainly take years to finalise.

The department is creating a system where the murky pathway to citizenship by naturalisation is vexed and uncertain. The unfortunate and unreasonable result is that Dali and many other similarly placed individuals remain in limbo – they are neither non-citizen nor citizen. Ultimately, their uncertain status presents perpetual barriers to accessing basic services or establishing themselves as South Africans in every sense of the word.

Citizenship by naturalisation should not be treated as second-tier citizenship. DM