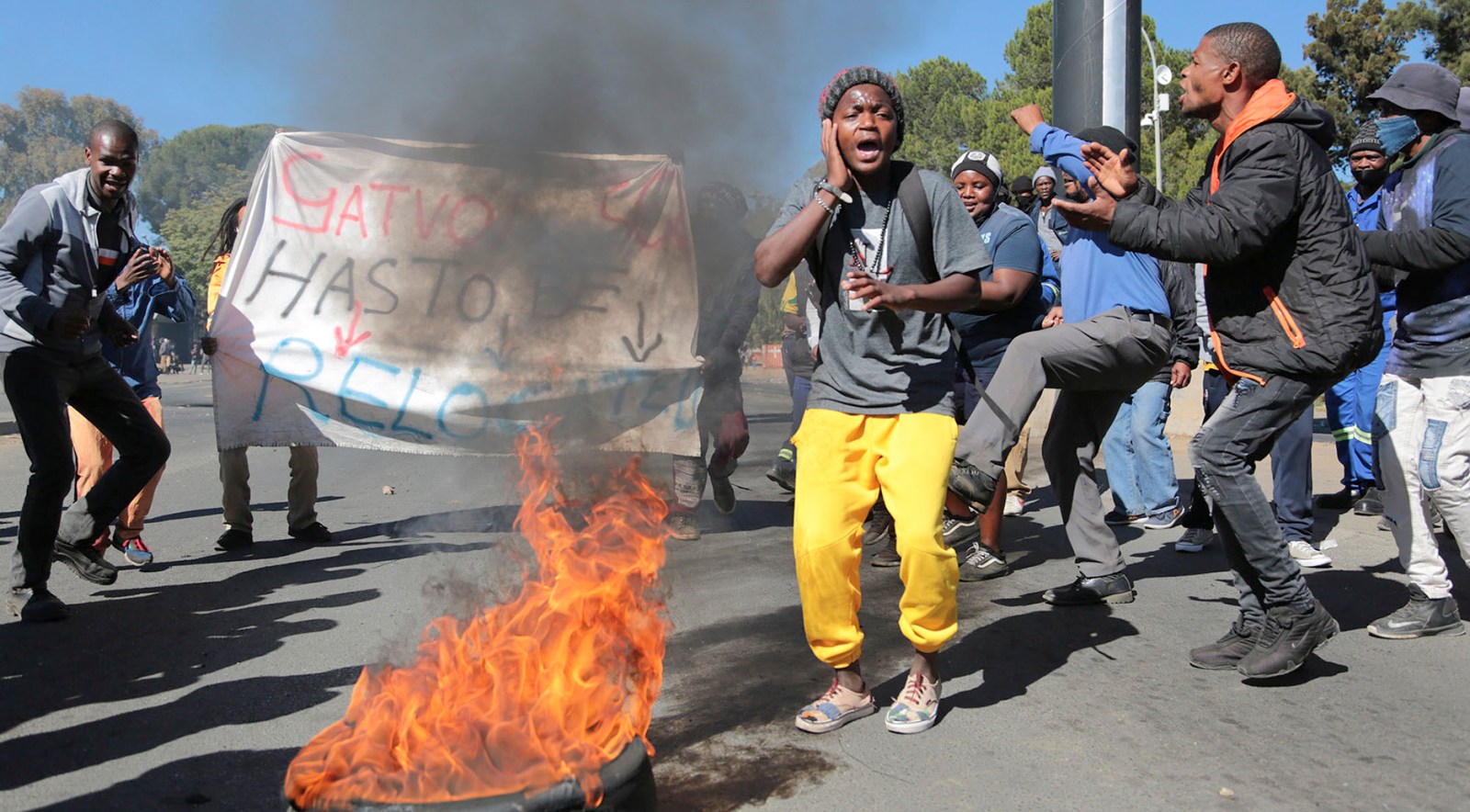 Service delivery protests in Mangaung in the Free State have led to a temporary halt in Covid-19 vaccinations in the metro.

On Sunday evening, Free State MEC for Health Montseng Tsiu said the Free State was ready to begin with Phase 2 of the national vaccination programme. “We have two vaccination sites in two different districts which are Thabo Mofutsanyana and Mangaung, she said during a National Department of Health briefing.

But on Monday and Tuesday, Mangaung was rocked by service delivery protests.

“The mass vaccination was badly affected by the protests in Mangaung which is one of the two districts identified to launch the programme,” provincial Department of Health spokesperson Mondli Mvambi told Spotlight. “The violent element of the protest prevented the vaccination programme to launch in the district because people could not get to work as there was a total shutdown. Cars were stoned, people in the streets were beaten so no one could work,” he said.

“We tried to get a police escort for the vaccine to arrive at Boikhucho old age home in Mangaung, but because of the scarcity of the vaccine and the cost implications we decided not to take that risk.

“So as a result the vaccination programme in Mangaung has been put on hold for now until the situation is stable,” Mvambi said. “The doses that were meant for Mangaung have been directed to Thabo Mofutsanyana District at Thekolohelong Welfare Centre and so far we have vaccinated 400 elderly people over two days. Everything has been going very smooth over the past two days in that district,” he said.

Spotlight contacted protest organiser Themba Zweni of Mangaung Concerned Residents, but he said he was not supposed to comment to the media until after they met the Free State Premier Sisi Ntombela.

Meanwhile, in Thabo Mofutsanyana the first two days of vaccination continued as planned. Elizabeth Vilakazi (81) who lives at the Thekolohelong Welfare Centre in Qwaqwa was one of the first people in the 60 and older age group to be vaccinated. “I received my vaccine on Monday and I feel very good about this. I am very happy that I managed to get the vaccination. Since I have been vaccinated, I have not fallen ill, I even slept peacefully like a baby,” she said.

The protests are not the only obstacle to the province’s vaccination plans.

Despite various efforts by the Free State Department of Health to help people over the age of 60 to register for Covid-19 vaccinations, Mvambi says they are not satisfied with registration numbers.

“This is just a working target; we know that we are still going to find old people coming to vaccination sites who in the past did not want to vaccinate because of false stories that they heard in the communities. Those people will not be turned back home. They will be registered and vaccinated. So our plans will change as time goes because people change their mind all the time,” said Mvambi.

“So our target is not low and the vaccine is not for everyone to get because our national target is to vaccinate 67% of the adult population. The point is to minimise the spread of the virus. We want to achieve herd immunity.”

The provincial launch of Phase 2 of the vaccination programme took place in Qwaqwa at the Thekolohelong Welfare centre. Leading the launch was MEC for Health Tsiu with Premier Ntombela. “We have embarked on various methods to reach out to our communities on the build-up to the official launch today, but the numbers that we have are very low,” said Mvambi.

Meanwhile, some older people Spotlight spoke to seemed uncertain about how registration worked.

Dineo Mafike (65) of Phahameng township in Bloemfontein says she really wants to get vaccinated but has no idea what to do. Mafike lives with her son and does not have access to the internet.

Nnene Mohapi (87) from Rockland township in Bloemfontein says she heard about the vaccine programme on a local community radio station.

“I heard about the vaccination programme, but I don’t know what to do,” she says. “I want to get it, but also at the same time I am scared that I am too old for it. I wonder if it will not make me sicker than I already am.”

Mvambi says, however, that the Free State Department of Health has taken steps to reach people like Mafike and Mohapi.

“We went into different communities. We did loudhailing, we visited old age homes accompanied by our stakeholders, we worked with various ward councillors for street ward committee participation, we also sent out our community healthcare workers for door-to-door visits and we have been making educational announcements on local community radio stations across the province,” he said.

“We also went to different schools to ask young people to help their grandparents and other older people that they know in their local communities to register for vaccination.”

The National Department of Health has launched a free SMS registration system *134*832# and a free WhatsApp line 0600123456 — neither of which require data.

“We are also making a call as the department to technology-savvy citizens to assist the elderly to register for vaccination. If you know older people in your community… we ask that you may please help them to register, as you are able to register as many over 60-year-old people as possible on your phone,” said Mvambi.

Civil society organisations have been helping people to register.

Provincial manager at The South African Red Cross Society in Free State, Claudia Mangwegape, says they have partnered with the Department of Health and the Department of Social Development to encourage old people to register for vaccination.

“We met with our luncheon clubs at different old age homes across the province to encourage the elderly to register for vaccination,” she said. “We have an agreement with both these departments and through this partnership, we are aiming to increase the number of EVDS registration. This is how we as an organisation are taking it upon ourselves to fight the spread of the virus.”

“We have been to old age homes such as Boikhucho and the Buyswater retirement village in Bloemfontein where we were able to help the residents to register,” she said. “When doing outreach programmes in some informal settlements where the internet is a problem, we were impressed as some of the old people had already been registered through the help of their grandchildren.”

Treatment Action Campaign provincial manager Mpho Matobako says they have also taken it upon themselves to lend a helping hand with registration. “Upon receiving training, we encouraged our members to go into communities to assist and educate the elderly, especially those in poor communities, about the Covid-19 vaccine,” Matobako said.

Provincial chairperson of the Democratic Nursing Organisation of South Africa in the Free State, Thibogang Thole, said they had also been encouraging people to register for vaccination.

“Our concerns, though, are the fact that not all our healthcare workers have been vaccinated. “We are worried because our members are frontline workers who really need the vaccine.

“So we really hope that the department will be able to vaccinate the rest of the healthcare workers this week,” Thole said. DM/MC