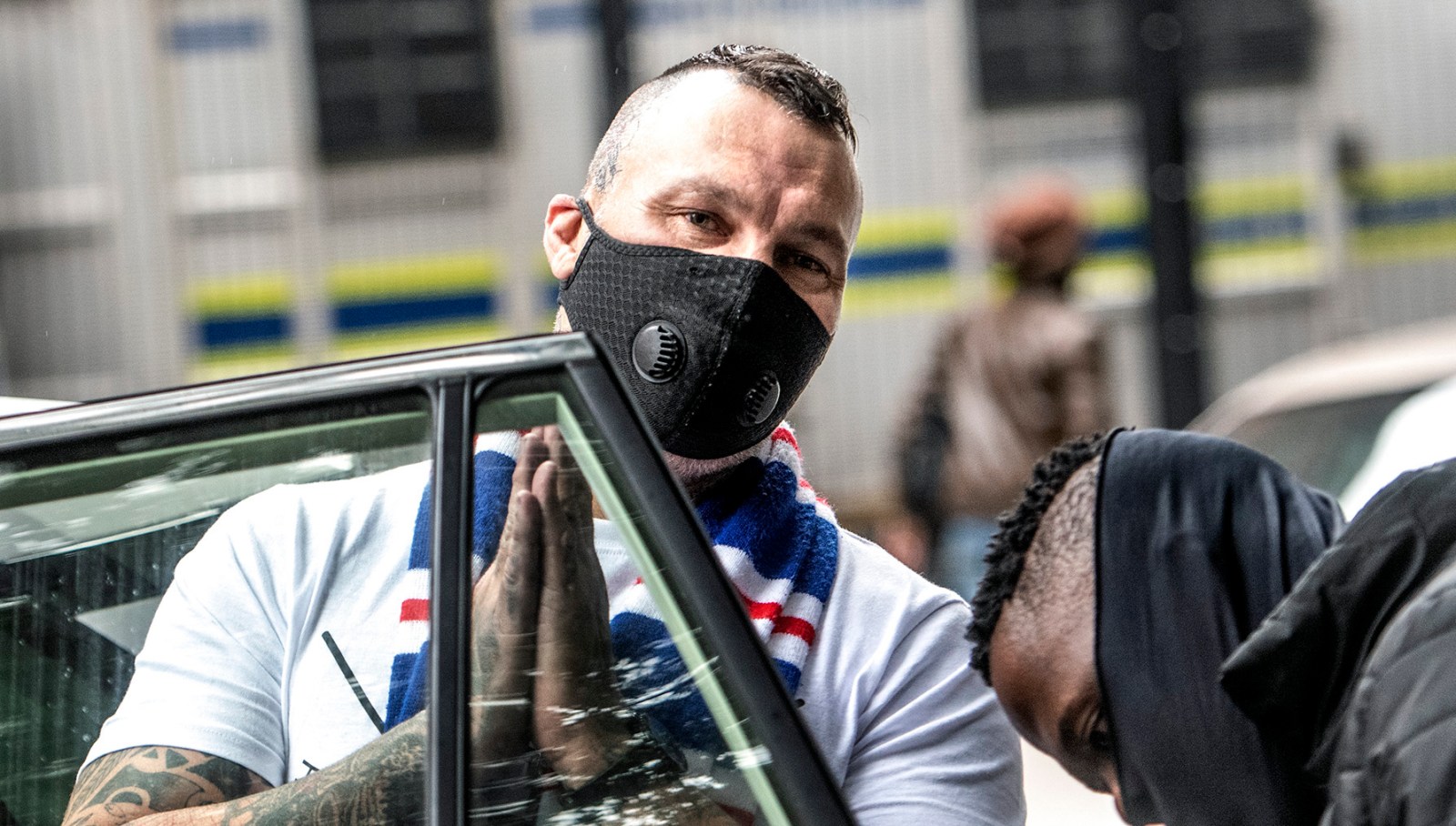 Zane Kilian, who is facing charges over the murder of Lieutenant-Colonel Charl Kinnear and the attempted hit on lawyer William Booth. (Photo: Gallo Images / Brenton Geach)

Murder accused in the Charl Kinnear assassination, Zane Kilian, will remain behind bars until 24 May when Western Cape High Court Judge Ashley Binns-Ward will deliver a ruling on whether the former professional rugby player will be allowed out on bail.

The application was heard in the Western Cape High Court with advocate Greg Wolmarans presenting the State’s case.

On 18 March 2021, Saba said in denying bail that Kilian was dishonest and had failed to prove that exceptional circumstances existed to justify his release on bail.

Her decision came six months after the assassination of Anti-Gang Unit Lieutenant-Colonel Charl Kinnear. He was murdered on Friday 18 September 2020 outside his house. On 23 September 2020, Kilian was arrested in Springs in connection with the killing.

The State’s argument is that in pinging Kinnear’s phone, Kilian had played a pivotal role in the plot that claimed the life of the senior cop.

Botha kicked off his argument referring to 15 “material errors” Saba had allegedly made and wanted the court to set aside her decision. Botha argued it was unreasonable that his client, who had been incarcerated since his arrest on 23 September 2020, be further prejudiced by the slow grind of the wheels of justice.

“With the backlog in the cases in the Western Cape High Court, it would take up to two years before this matter would be placed on the roll. It would therefore be unfair to keep my client so long in custody,” said Botha.

Botha’s main argument is that the State’s case is based on circumstantial evidence and the likelihood existed that his client would be acquitted on the charge of murder. The only evidence linking Kilian was the pinging of Kinnear’s phone, said Botha.

He said that the magistrate was wrong in finding that Kilian’s version had been a “bare denial”.

“The magistrate weighed up the bare denial with the evidence of the police and then concluded the State has a prima facie case,” he said.

“But if you weigh up the correct version of the accused, namely yes, he did ping, but there is an explanation for it, she would have derived a different decision,” said Botha. Saba had viewed Kilian’s “innocent explanation” as a denial and had come to the conclusion that there was a prima facie case.

Botha told the court: “Had she started at the right premise, she would have seen, here we have a person who is drawn into this case, he had an innocent explanation and she would have come to another conclusion.”

“The accused used the platform of State witness Bradley Goldblatt and the appellant’s version is that he used the same username with Goldblatt. So anyone could have pinged Kinnear.”

In reference to R5-million that flowed through Kilian’s bank account in March 2020, Botha argued that his client had addressed this in his affidavit when he swore: “I saw the bank statements, it belongs to another person, I only got R20,000 per month and only R7,000 was left in my account.”

On the issue of Goldblatt’s affidavit in which he stated that Kilian had phoned him and asked that he “delete him” Botha said: “We got to look at the probabilities and asked if it’s possible. He didn’t stay in a normal three-bedroom house with 40 Hawks officers inside. How on earth do you get a device and call somebody?”

In his opening remarks, Wolmarans said “all animals were not equal” because it could be determined from the list of 28 people whose cellphones had been pinged, that Kinnear was in the top position with criminal lawyer William Booth at number three on the list. Booth was unharmed after shots were fired in a failed attempted hit on 9 April 2020 at his home in Gardens, Cape Town.

The prosecution further argued that the affidavit by Hawks Captain Edward du Plessis provided some idea of the “type of homework” done by Kilian on Kinnear.

“That name Kinnear would not only have occupied his thoughts, but even the image of Kinnear and that of his wife, Nicolette.”

In April 2020, Kilian had obtained “the XDS” report on Kinnear which contained personal details, those of his wife and even his bond details. The details Kilian obtained were the same as in the case of Booth.

“A photo verification report on Kinnear? Why would the appellant need to know how the deceased Kinnear looked? This has nothing to do with car repossessing,” said Wolmarans.

The prosecution also argued that not only did Kilian research Booth and Kinnear, but was also responsible for most “pings” on the two men.

It was also the prosecution’s contention that Kilian wanted the court to believe that he didn’t know Kinnear and Booth.

Responding to the judge’s question on the likelihood of the State obtaining a conviction on the basis of cellphone pinging, the murder of Kinnear and the attempted murder of Booth, Wolmarans replied: “Not only is there a clear modus operandi which as a case is circumstantial, but is also compelling. When linked to all his tracking, a similar type of pattern certainly puts the appellant on the defensive and then his so-called innocent explanation is just not good enough.”

That he was a debt collector was neither here nor there. Kilian needed to explain why he pinged the phones and how this was linked to his core employment duties.

If Kilian had had a cast-iron alibi, the stakes would have been raised in his favour.

“To simply say this was in pursuit of car repossession is not simply good enough.”

Wolmarans also informed the court that the State had “inadvertently” failed to add the charge of attempted murder relating to the Booth incident on 9 April 2020 to the combined indictment in the Blue Downs Regional Court. But this charge would now be added, he assured the court.

Botha argued there were other individuals who had faced attempted assassinations, including alleged Sexy Boys leader Jerome Booysen and underworld figure Mark Lifman. His client should theoretically be charged for these as well, said Botha.

“I submit the reason why the appellant was charged for the Kinnear case is they had to find someone to arrest at the time. The instruction from Police Minister Bheki Cele was, if a police officer gets shot then they need to get somebody in custody within 48 hours.”

Kilian was that somebody, Botha concluded.

Judgment will be delivered on Monday, 24 May. DM/MC