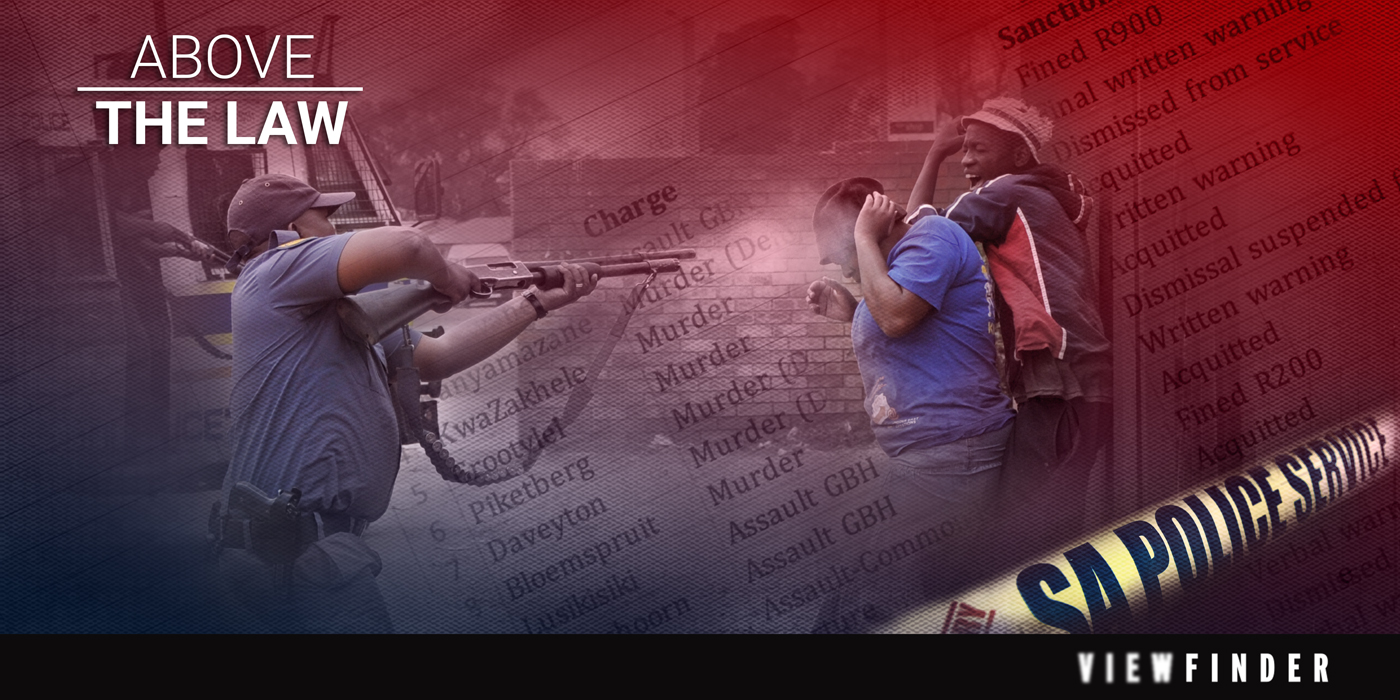 The police minister has brushed off the findings of Viewfinder’s exposé on police management’s failure to discipline officers implicated in cases of brutality and even murder. In doing so, the minister ignored key facts about our investigation and about the poor health of police oversight in South Africa.

This article was first published on Viewfinder and GroundUp.

In an interview last Thursday with Leanne Manas on SABC’s Morning Live, Police Minister Bheki Cele was asked to respond to Viewfinder’s findings. He said that he did “not agree” with them. He said we had not provided evidence for our statistical claims and implied that we had not approached the police for their right of reply.

“If you say police kill hundreds of people, and you leave that number there, you don’t put evidence on the table,” Cele said, before picking up on the point again later in the interview.

“One other thing that I dispute, that I would like to get evidence on, are numbers that there is hundreds and hundreds of them.”

It is a pity that the minister declined Viewfinder’s request for an interview sent several weeks before we published our findings. We could have shown him that these statistics were summarised from the master registers of the Independent Police Investigative Directorate (Ipid). These statistics are also published in Ipid’s annual reports and are publicly available. This source was expressly cited in our reporting.

The raw data reveal that the use of violence by police officers is most frequently reported in poor black communities — and that the violence goes systemically unchecked by the South African Police Service’s (SAPS) management.

The data show that there are indeed “hundreds and hundreds” of killings and thousands of brutality complaints registered by Ipid every year and that there is a systemic failure by SAPS to discipline officers accused of wrongdoing in these cases. The numbers are not in dispute.

“It is very unfortunate that you get these researchers there and nobody (approaches) the police to find if we have anything to say,” Cele said.

Not only did Cele deny Viewfinder’s request for an opportunity to brief him on our findings and for an interview, police management did not respond to our requests either. Six days before publication, Viewfinder detailed our findings in an email query to national police spokespersons Brigadier Vish Naidoo and Colonel Athlenda Mathe. Mathe confirmed receipt and said that the query had been forwarded to SAPS “personnel management”. SAPS sent no response. SAPS has still not responded to our query or our findings.

On Morning Live, Cele sought to reassure viewers that the existence of Ipid meant there was a functioning system of police accountability in South Africa.

“There is no organisation that is regulated like the police in the Republic of South Africa. You have so many bodies that are looking after that, your main one would be Ipid,” Cele said.

Viewfinder’s investigation found that Ipid’s effectiveness is reliant on police management to follow through on its disciplinary recommendations and to ensure that officers implicated in violent misconduct are held accountable. Police management’s ultimate power over these disciplinary processes, and its frequent failure to implement Ipid’s recommendations, means that the police watchdog is in fact toothless. This means that time and money spent by Ipid on murder and brutality investigations is often wasted.

“There is truth in (Viewfinder’s) reporting in the sense that there are challenges with regard to implementation of our recommendations by the SAPS,” said Ipid investigations head Matthews Sesoko, interviewed on the SABC’s Full View last week.

“SAPS, in some instances… decide not to even initiate disciplinary action… In some instances you find that there are sanctions that are actually not appropriate to the offence that the member is being charged with.”

Our investigation identified and explained the specific loopholes in law and regulations which senior police officers entrusted with discipline management use to thwart Ipid recommendations. These loopholes can and should be closed. This would require a review of the incompatibilities between the intention of the Ipid Act and the prescripts of the SAPS Discipline Regulations of 2016.

Last month, Cele published a report by a Panel of Experts on Policing and Crowd Management. The report recommended that police discipline management be professionalised through a new unit comprising dedicated, permanently employed and expertly trained officials. Such a change would stop the conflict of interest which is the obvious result when police officers are appointed ad hoc to represent the SAPS in leading evidence against, or to preside over the hearings of, an accused colleague.

The implementation of the expert panel recommendation would be a step in the right direction. But, other changes are necessary too. It is evident that these departmental hearings cannot continue to happen behind closed doors. The watchdog or other independent monitors need to be formally included in these proceedings to ensure that they do not amount to rubber-stamping exercises or cover-ups. In fact, the minister may do well to consider a way to make departmental hearings, and the staff who represent the SAPS and preside over them, entirely independent of the command structure and influence of SAPS management.

Viewfinder’s investigation showed that the existence of Ipid provides police commanders with an excuse to outsource investigations of violent misconduct under their watch (instead of taking their own steps to rein in their members). Time and again, senior current and former Ipid officials have affirmed to Viewfinder that there is nothing stopping police commanders from taking such action against their subordinates accused of violent crimes.

This could be done by management ensuring that suspects are placed on precautionary suspension or desk duty, to minimise their interactions with the public while investigations are pending. Police are even empowered to discipline, convict and dismiss members if Ipid investigations drag on for too long. But, according to Ipid sources and a retired senior police officer who spoke to Viewfinder, this is unlikely to ever happen.

So, officers accused of even the most serious crimes often remain on duty.

There are ways to fix police accountability in South Africa. As the political leader of SAPS, Cele has the power to champion such reforms and to see them implemented during his tenure. DM/MC