By Thamsanqa Mbovane and Joseph Chirume• 18 May 2021 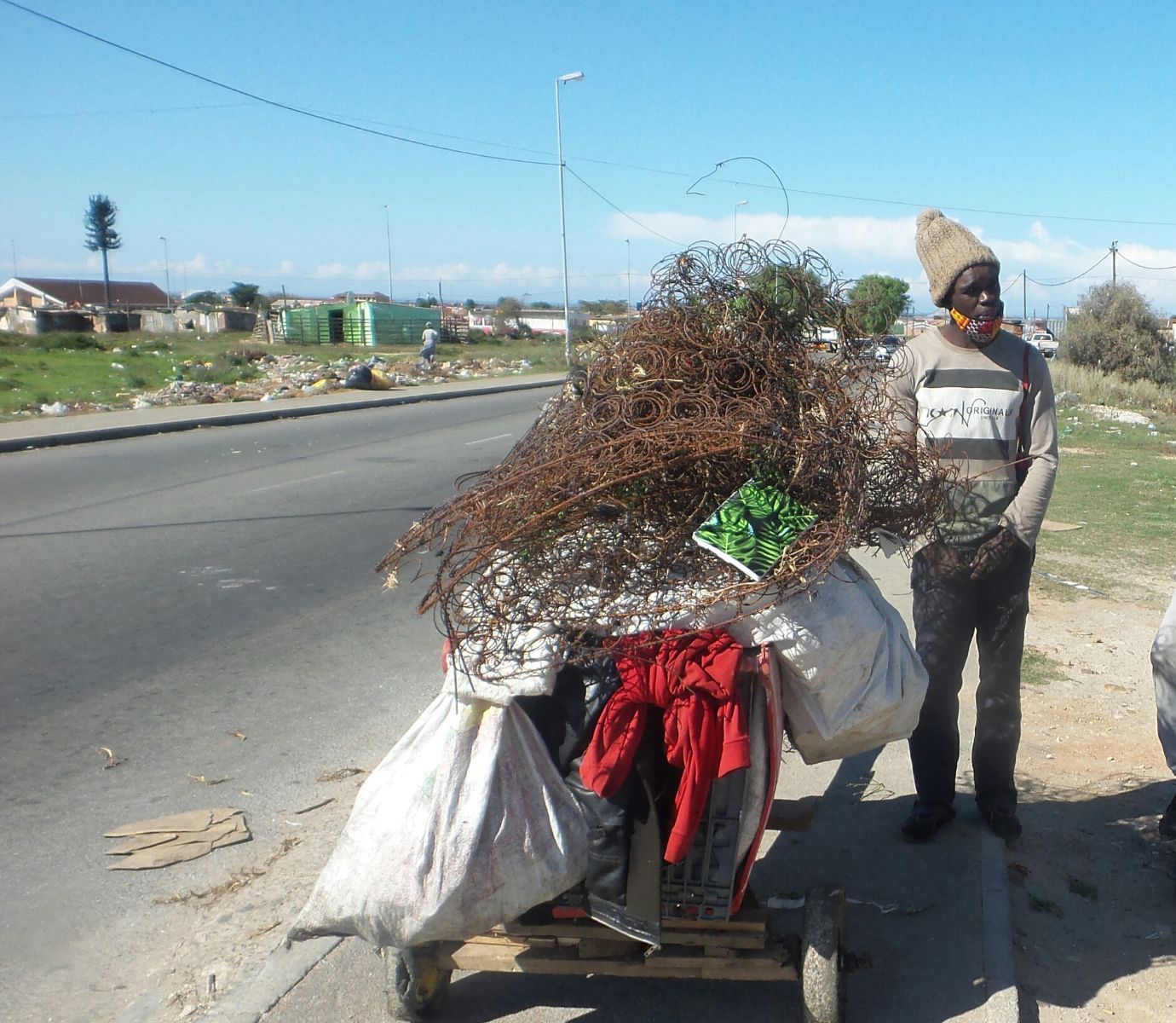 Thobani Mapangwana of Gqeberha lives with his girlfriend. He survives by collecting scrap metal to sell to local scrap buyers. He said he had hoped that getting the Covid-19 grant would supplement his earnings. (Photo: Joseph Chirume)

Many Social Relief of Distress Grant applicants claim they have yet to receive payment and claim they cannot survive without the subsidised income.

The abrupt termination of the R350 Social Relief Of Distress Grant last month has left many people who were relying on the money extremely desperate.

On Tuesday, we asked people at grant payment sites in Nelson Mandela Bay about their ongoing struggle to get the grant.

Thobani Mapangwana said that the South African Social Security Agency (Sassa) had not paid his grant since he applied last year. He said he has been sent “from pillar-to-post” by Sassa officials in Motherwell each time he went to enquire about his application. But according to Sassa’s records, Maphangwana only applied in February 2021.

Maphangwana lives with his girlfriend who is unemployed. He survives by collecting scrap metal to sell to local scrap buyers. He said he had hoped that the relief grant would supplement his earnings.

“I spent the entire lockdown period with no money. I felt like I was not a national of this country because my other family members and my friends were getting their money. My situation was made worse after businesses that did not offer critical services were ordered to close by the government, including the scrap metal business.”

Maphangwana, who is in his forties, said he last had a steady job 20 years ago. He said he started collecting scrap metal a few years ago after years of failing to find another job.

“I spent several nights sleeping in cold weather outside the Motherwell Post Office to check whether my money was paid. I am angry because after spending all the time and effort they now say I applied in February when I did so last year,” he said.

In response to Maphangwana’s case, Eastern Cape Sassa spokesperson, Luzuko Qina said, “He applied in February 2021 and his application was approved. Our office has been trying to get hold of him to upload his preferred method of payment to no avail.”

In KwaNobuhle township in Kariega, Monde Manyashe said, “When I collected my Covid-19 grant of R350 a week ago, I was told by a teller at the Post Office that it was the last R350.”

Manyashe is unemployed. He relies on what he gets from asking for money along the busy Siwasa Street. This, so that he can feed himself and his younger brother who is 18.

“I often buy two packets of rice which costs R3 each so I always hustle for at least R6 a day. We can eat the rice for supper and again for breakfast the next day or we eat half a loaf of bread and a slice of polony,” he said. Sometimes he gets the items on credit and promises to repay when he gets piece work.

Manyashe said, “Today I ate a plate of samp before 8am as a handout from my neighbour. She knows I depend on her again as my R350 grant payout ended on Wednesday last week. My younger brother depends on the meals he gets at school to survive during the day.”

He wants the government to reconsider its decision to end the R350 grant. “With the Covid-19 grant, I could buy food that lasted me a whole month. But now I am in the township again, sitting with nothing,” he said.

Qina has previously said that with the looming third wave of Covid-19 infections, it was necessary to minimise congestion at the branches. He said that all beneficiaries whose applications or appeals were approved and had still not received their money, will get an SMS to come collect their money on specific dates. DM